The breasts of pregnant women change in size and appearance due to the effects of the hormones estrogen and progesterone. Alveolar cells of the breast begin to secrete colostrum in the twelfth to sixteenth week of pregnancy. This is called lactogenesis I. Colostrum is a thick, yellowish-white fluid which can be expressed from the breast by the third trimester. Milk secretion is suppressed during pregnancy by estrogen and progesterone.

Colostrum has more protein and fewer carbohydrates and fat than mature breast milk. Colostrum is rich in secretory immunoglobulin A (IgA), which helps to protect the infant from infection. Colostrum also helps to establish a normal gut microbiome in the infant. The bowel is considered sterile at birth.

Human colostrum is the ideal food for human newborns and is preferable over formula or milk from other animals. The proportions of nutrients in human milk are different than other animals and therefore suited better for humans. Although formula simulates human milk as much as possible, the components of colostrum and mature milk, such as immunoglobulins, leukocytes, as well as antioxidants, enzymes, and hormones, give colostrum and mature human milk many advantages over formula. This often is vitally true with preterm infants who are much more vulnerable to infection and greatly benefit from receiving colostrum and human milk.[1][2][3]

This article highlights the knowledge needed by the interprofessional team in managing female patients who are currently lactating or will be lactating in the future.

The function of the breasts is to produce milk to nourish infants. The purpose of colostrum is to provide low-volume milk that helps the newborn as they learn to regulate the suck, swallow, and breathe cycle during feeds. Colostrum has an important role in providing immunity as well as nutrition to the newborn and helps in establishing a healthy gut microbiome, which can have long-term, beneficial effects.[4]

Female breast development in the fetus begins in the fourth week of gestation. By 16 weeks, the smooth muscle of the nipple and areola are present, and the epithelial cells develop into mammary buds. These will branch out into alveoli and ducts, which will create the mammary system. The mammary gland continues to develop throughout childhood until puberty, when there is a rapid proliferation of ducts and alveoli. The hormones that influence each menstrual cycle also increase the proliferation and growth of the mammary tissue.[5]

The breast has a high level of vascularization, including the internal mammary and lateral thoracic arteries. There also are numerous lymphatic vessels in the breast and axilla. The lymphatic vessels follow the lactiferous ducts and converge near the nipple. Lymphatic fluid can accumulate during the engorgement phase of breastfeeding, usually 3 to 5 days postpartum, and contribute to the visible distention of the breasts. The components of milk are synthesized in the alveoli, including protein, fat, and carbohydrates, or are retrieved from maternal plasma (vitamins and minerals).[5]

The posterior pituitary releases oxytocin in response to an infant suckling at the breast. The nipple and areola have a high level of sensory nerve endings. The release of oxytocin causes the milk ejection reflex (MER), also referred to as the letdown reflex. The myoepithelial cells surrounding the alveoli will contract and propel milk forward through the lactiferous ducts and out through the nipples. The mother often feels a tingling sensation. Infant suckling also stimulates prolactin (from the Greek root word meaning "for milk"). Prolactin levels rise during pregnancy, drop shortly before birth, and then rise again after birth. Prolactin levels double with infant suckling.[1]

Many physiologic variables can affect breastfeeding and, therefore, the intake of colostrum. This can be divided into maternal factors and infant factors. Maternal factors include the size and shape of the nipples, breast development during puberty and pregnancy, mammoplasty (reduction or augmentation); other breast surgery; fibrocystic changes; breast cancer, obesity, and concurrent medical problems in the mother. Factors in the infant that can affect breastfeeding include gestational age at birth; ankyloglossia (tongue-tie); cleft lip or palate; other physical malformations; infections; oral-motor dysfunction (abnormal suck); and various diseases, such as congenital heart disease, cystic fibrosis, inborn errors of metabolism, intestinal malabsorption syndrome, neurological disorders, renal disease, and thyroid disease.[1]

Nipple size and shape are probably the most common factor affecting the first days of breastfeeding when the infant receives colostrum. A more erect nipple encourages the newborn to latch and suck. Flat or inverted nipples can make it more difficult for the mother and infant to learn how to breastfeed. Nipple shields can be used but have shown limited success. Another common factor is the infant's wakefulness and ability to suck. The best way to promote breastfeeding is skin-to-skin time with the mother within 5 minutes of birth and lasting for at least 1 hour. This helps the infant physiologically adjust to extrauterine life and helps them to find the nipple by smell and tactile stimulation. This skin-to-skin time also helps establish normal skin flora on the newborn to protect them from pathologic bacteria. Successful breastfeeding within an hour of birth sets the stage for improved breastfeeding experiences in the coming days.[1]

The role of the interprofessional team in evaluating and treating women is critical. As mentioned, surgical procedures on the breast can influence breast milk production and ejection. The main factors include the type of surgery performed, whether neural or ductal pathways were disturbed, and the amount of breast tissue removed. Breast augmentation usually does not interfere with full breastfeeding, but breast reduction surgery often leads to the inability to breastfeed. Some breast reduction surgery involves completely removing the nipple and then reattaching it after excess breast tissue is removed; this will interfere with nerve and ductal pathways. The pedicle technique involves keeping the nipple attached, and tissue around this pedicle is removed. This has a somewhat higher chance of allowing breast milk production and ejection to occur. Breast surgery for benign tumors or cancer also can affect the ability of the breast to produce milk.[9]

The interprofessional team should consider the age and future wishes of the patient whenever breast surgery is considered. Patients should be counseled on the risks and benefits of the surgery or other treatment of the breasts and their influence on future breastfeeding so that they can make informed decisions about their treatment.[10] The healthcare team should also consider the use of medications and their effect on the colostrum, the breastfeeding process, and the suckling newborn. The patient needs to be counseled thoroughly on the indications, interactions, and possible adverse effects for themselves and their baby.[11][12] The health care team needs to educate women about the importance of colostrum for their newborns and encourage/support women in their early breastfeeding experiences to improve breastfeeding outcomes and newborns' health.

Colostrum, the initial milk produced by the breast during pregnancy, can be expressed during the third trimester and begins to be secreted in larger volumes after birth. Lactogenesis II begins at 2 to 3 days postpartum and is often called transitional milk. This milk gradually changes from colostrum to mature milk. The quantity of milk increases rapidly. The immunoglobulins and proteins decrease, and the lactose, fat, and calories increase. Lactogenesis III is mature milk and replaces the transitional milk. This milk is more bluish-white and not as thick. Mature milk contains 20 kcal/ounce and nutrients specific to meet the needs of the growing infant. It continues to have immunoglobulins and other antibacterial components.[13] 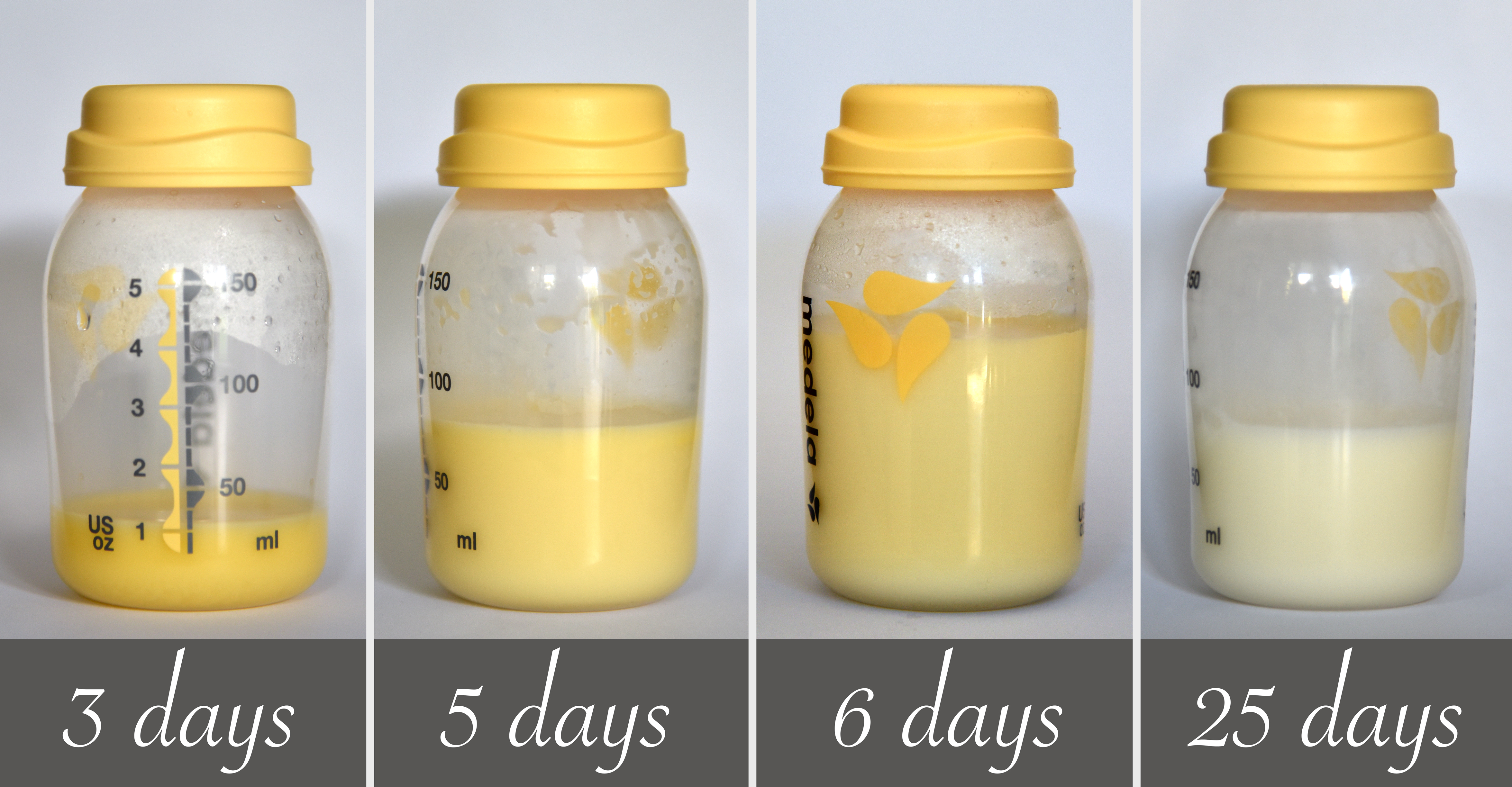 Davis JM,Norwitz ER, Current Understanding of Medication Use in Pregnancy/Lactation and Neonates: What Are the Key Knowledge Gaps? Clinics in perinatology. 2019 Jun;     [PubMed PMID: 31010569]