Colloid cysts are benign growths that are usually located either in the third ventricle or at or near the foramen of Monroe which is found at the anterior aspect of the third ventricle of the brain. The cysts are comprised of epithelial lining filled with gelatinous material that commonly contains mucin, old blood, cholesterol, and ions. Colloid cysts can cause a variety of symptoms including headaches, diplopia, memory problems, and vertigo. Rarely, colloid cysts have been reported to cause sudden death. This activity reviews the pathophysiology, evaluation, and management of colloid cysts and highlights the role of the interprofessional team in the care of patients with these lesions.

Colloid cysts can cause various symptoms, including headaches, diplopia, memory issues, and vertigo. Rarely colloid cysts have been cited as a cause for sudden death. When colloid cysts are symptomatic, they most commonly cause headaches, nausea, and vomiting secondary to obstructive hydrocephalus. The obstructive hydrocephalus is precipitated by blocking the egress of cerebrospinal fluid (CSF) from the lateral ventricles at the foramen of Monro, which connects the lateral and third ventricles.[2]

The precise etiology of colloid cysts is unclear and still a topic of debate. In the early 20th century, the suggested etiology was that the cyst was a remnant of the paraphysis element. The paraphysis element is an embryonic structure located at the anterior portion of the diencephalon between the two hemispheres of the telencephalon.

As colloid cysts have also been found in the cerebellum, frontal lobe, and pontomesencephalon, there have been other theorized origins of the colloid cysts. Other etiologies include remnants of respiratory epithelium, an ependymal cyst from the diencephalon, and invagination of the neuroepithelium of the lateral ventricle causing a cyst to form.[2]

Colloid cyst accounts for less than 2% of all primary brain tumors. More than 99% of all colloid cysts are reported to occur at the rostral end of the third ventricle, at or near the foramen of Monro. Colloid cysts account for approximately one in five intraventricular primary brain tumors. Most patients diagnosed with a colloid cyst are in their third through the seventh decade of life, but cases have rarely been reported as early as the first year of life.

Most colloid cysts identified are currently asymptomatic and identified incidentally on imaging. When a colloid cyst does cause issues, it most commonly causes obstructive hydrocephalus.

Over time colloid cysts tend to growly very slowly. Some colloid cysts may never reach a size that will cause an issue and can be followed, whereas others grow more quickly and become symptomatic with time.

Grossly a colloid cyst is a unilocular round structure filled with a viscous material. Microscopically the cell wall is unicellular typically composed of columnar epithelium, which may or may not be ciliated. The cyst contents are typically void of living cells and composed of desquamated ghost cells and filamentous material. The mucin stains are positive for periodic acid-Schiff (PAS). The epithelial cyst wall stains positive for keratin and epithelial membrane antigen (EMA).

The majority of colloid cysts are found incidentally on imaging of the brain occurring for other reasons. When a colloid cyst is symptomatic, it most commonly causes non-communicating hydrocephalus. Symptoms of hydrocephalus can include headaches, nausea, vomiting, lethargy, coma, and death. If the hydrocephalus is slowly progressive, the patient can have more subtle findings, including urinary incontinence, trouble with walking, falls, altered mentation, and memory deficits.

Immediate evaluation of suspected colloid cyst includes the airway, breathing, and circulation (ABCs) of emergency medical management if the patient may be at risk for acute hydrocephalus and neurologic deterioration. A thorough neurologic exam is important to identify any neurologic deficits, but imaging remains the cornerstone of evaluation for patients with a colloid cyst.

A colloid cyst is typically not visualized on plain radiographs of the head and thus computed tomography (CT), and magnetic resonance imaging (MRI) of the head are more important imaging studies.

CT of the head can be quickly obtained to identify acute hydrocephalus.  On CT imaging, the colloid cyst is typically a circular, hyperdense mass at or near the foramen of Monro. Rarely are colloid cysts isodense, hypodense, or calcified.

MRI is the preferred method for imaging colloid cysts. On T1 sequencing a colloid cyst can have variable characteristics and be either hyperintense, isointense, or hypointense. With gadolinium administration, the colloid cysts should not enhance. Rarely a peripheral enhancement will be noted around the colloid cyst, which most likely represents a vessel stretched over the colloid cyst.

Treatment and management depend if the colloid cyst is found incidentally, or is symptomatic.[3][4][5][6]

After acute, life-threatening hydrocephalus has either been treated or ruled out, the clinician can deal with the colloid cyst. Current treatment options include craniotomy with excision via a transcallosal or transcortical route, endoscopic removal, and stereotactic aspiration.

A colloid cyst can be removed with a craniotomy. A craniotomy is a surgery where an incision is made in the scalp, and part of the skull is removed for the duration of the surgery then the skull is put back in place. Two separate routes exist to remove the colloid cysts: transcallosal and transcortical. In the transcallosal approach, the two frontal hemispheres are split apart, and a surgical corridor is created through the rostral end of the genu of the corpus callosum to access the colloid cyst. For the transcortical route, a surgical corridor is developed directly through the brain cortex, most commonly through the right frontal, middle gyrus, to access the lateral ventricle. The colloid cyst can then be removed through the lateral ventricle.

Removing a colloid cyst via a craniotomy has the highest up-front surgical risk but may have the lowest recurrence and reoperation rate. The open craniotomy provides more degrees of freedom for access to the colloid cyst and may be more suitable for larger colloid cysts but does have limitations based on the approach chosen.[7][8]

Endoscopic Removal of a Colloid Cyst

An endoscopic surgery consists of making a small incision in the scalp and a small hole in the bone. A small tube, typically called a sheath, is advanced through the brain to get access to the lateral ventricle. An endoscope can then be passed into the lateral ventricle to remove the colloid cyst. An endoscopic in its simplest form is a tube with a light, camera, and working channel. The light provides illumination for the camera to see what is going on. The working channel provides the surgeon with a way to get instruments and tools in front of the camera to perform surgery.

Stereotactic Aspiration of a Colloid Cyst

A third option to treat a colloid cyst is a stereotactic aspiration. This is performed by making a small incision in the scalp then a small hole in the bone. The surgeon then advances a needle through the brain and into the cyst using some variety of either frame-based or frameless neuronavigation. The contents of the colloid cyst may be able to be aspirated, decreasing its size.

There are other lesions that can appear similar to a colloid cyst on imaging including:

Some colloid cysts can be watched for years to decades without any issue. Others can slowly grow in size or cause subacute or acute hydrocephalus. With complete surgical resection, the prognosis is good, and colloid cysts are rare to recur after complete resection. Rare cases of sudden death have been reported with colloid cysts, which are usually attributed to acute obstructive hydrocephalus.

Patients kept on observation should be instructed to report to the nearest emergency department should they will develop severe headaches or vomiting.

The CNS colloid cyst is best managed by an interprofessional team that also includes neurosurgeons, neurologists, radiologists, and neuroscience nurses. When a colloid cyst is diagnosed, the biggest dilemma is how to manage it. The minimally invasive approaches have less morbidity but have a higher rate of recurrence and reoperation. Removing a colloid cyst via a craniotomy has the highest up-front surgical risk but may have the lowest recurrence and reoperation rate. The open craniotomy provides more degrees of freedom for access to the colloid cyst and may be more suitable for larger colloid cysts but does have limitations based on the approach chosen. A thorough discussion should be undertaken with the patient and let him or her decide which approach they favor. Specialty trained nurses in perianesthesia, operating room, and critical assist in the care, monitor patients, and report changes in status to the team. An interprofessional team approach will result in gest outcomes. [Level 5] 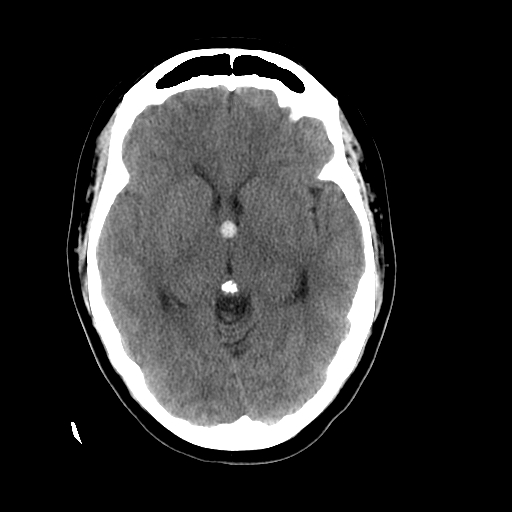