Bowenoid papulosis (BP) is an uncommon sexually transmitted condition. It was first described in 1977 by Kopf and Bart as penile papules. However, it occurs at both sexes. It tends to affect young sexually active people. This condition was also termed “vulvar intraepithelial neoplasia (VIN)” in the vulva and termed penile intraepithelial neoplasia (PIN) in the penis.[1] The classification of this disease was confusing and including three clinical entities: BP, Bowen’s disease, and erythroplasia of Queyrat. Now it is recommended that these three entities not be used to describe lesions in the anogenital area.[2] But, dermatologists still recognize BP as a distinct clinical variant. In fact, BP is induced virally by human papillomavirus (HPV) and presents as solitary or multiple skin-colored papules in the anogenital area. It can last from two weeks to several years. Clinically BP is assimilated to genital warts while histologically it has a close resemblance to squamous cell carcinoma in situ (Bowen’s disease). Treatment is generally conservative. BP lesions are generally considered benign with a spontaneous regress leaving no sequelae in immunocompetent persons, although a small number may transform into invasive squamous cell carcinoma.

BP is a sexually transmitted condition associated with HPV infection. Most lesions are associated with oncogenic HPV types mainly the HPV 16 genotype but occasionally HPV 18, 31, 33, 34, 35, 39, 42, 48, 51, 52, 53 and 54 are detected.[2] BP may also occur in immunocompromised individuals such as in organ transplant recipients. Smoking has recognition as a recurrence factor.

BP occurs commonly in sexually active individuals and predominantly in their third to the mid-fifth decade with a mean age of 31 years.  However, BP can appear at any age and ranges from 3 to 80 years. Both sexes are affected, although recent data showed an increased number in women. There are an estimated 5 cases per 100000 women.[3] The exact prevalence is unknown because BP lesions are related clinically to genital warts. There is no racial predilection for BP.

Detection of papillomavirus common antigen in cases of BP supports the hypothesis that BP results from HPV. In fact, E6 and E7 viral oncoproteins of oncogenic HPV types contribute to oncogenesis by inducing over-expression of p16 protein and human telomerase reverse transcription (hTERT).

Histologically, BP is characterized by acanthosis with full thickness epidermal atypia, known as Bowenoid dysplasia. Multiple metaphase mitoses are usually visible above the basal layer as well as scattered dyskeratotic and multinucleated keratinocytes with pleiomorphism. Histopathologic findings may also show parakeratosis and hypergranulosis. The integrity of the basement membrane is preserved. The dermis contains superficial infiltrate of lymphocytes with perivascular accentuation. Induction of the focal epidermal hyperplasia and dysplasia is viral. Moreover, immunohistochemistry for p16 protein reveals strong in BP. Staining with an antibody to p16 protein has high specificity and sensitivity to detect this disease.

BP is a rare transmitted condition and typically occurs in sexually active people. It is clinically characterized by multiple well-demarcated red-brown to violaceous papules, usually less than 1 cm in size. The surface of the lesion can be flat, smooth, papillomatous or verrucous. Some papules may coalesce into large plaques. Sometimes, BP presents as warty white plaques. The distribution of lesions is commonly discrete; sometimes BP can have an annular or linear exhibition. In men, BP lesions primarily involve the penile shaft, but may also involve foreskin, glans, scrotum as well as the anus. Whereas in women, the lesions are usually bilateral and affect labia major, labia minor, clitoris, inside the vagina, inguinal folds, and perianal area. The lesions are generally darker in women than in men. They are usually asymptomatic; occasionally, patients may complain from pruritus and soreness of the affected area. Extragenital BP is a very rare condition, and it may involve the face, fingers or neck, with or without concomitant genital lesions.[4]

Because of its potential malignant transformation, the diagnosis is usually by a skin biopsy. HPV subtyping may also be a recommended next step. Microscopic findings show typical a feature of Bowen’s disease with only a few differentiating features. The distinction rests in the circumscribed plaque-like pattern, the multiplicity of lesions, the age of the patient, and less dyskeratosis and atypia and more dilated vessels in the dermis in pathology.[4] Hence the diagnosis of BP is based on clinical grounds and histopathological correlation. Furthermore, a skin biopsy is recommended in case of recalcitrant lesions to standards therapies to rule out malignancy.

The treatment aims to prevent malignancy transformation and to preserve the normal tissue and function. Since the disease commonly occurs in young people and it frequently remits spontaneously, the management of BP is generally conservative. Without treatment, BP lesions may regress in an average of 8 months. Treatment modalities include locally ablative or destructive therapies such as carbon dioxide (CO2) laser vaporization, cryotherapy, electrocoagulation, 5-aminolevulinic acid-mediated photodynamic therapy (ALA-PDT), excisional surgery, and 5 fluorouracil (5FU). Moreover, topical imiquimod cream 5% once a day on an alternate day for one month has proven good results on limited lesions of BP with viral clearance in some cases. However, relapse often occurs with all treatment modalities.[3][5][6]

Furthermore, there are prophylactic vaccines to prevent infection with oncologic HPV subtypes. Moreover, prevention from recurrence correlates with cessation of cigarette smoking.

BP has a variable course. Lesions may regress spontaneously or persist for several years with older persons or immunocompromised patients. It may rarely transform into Bowen’s disease or invasive squamous cell carcinoma.[7]

Transformation into invasive squamous cell carcinoma is rare and occurs in less than 1 % of cases, especially in immunocompromised individuals. Females with BP lesions and sexual partners of male patients are at high risk of cervical or vulvar carcinomas because of the infection with a potentially oncogenic HPV.

BP rarely evolves into invasive squamous cell carcinoma; however, it is essential to educate patients regarding the risk of the potential malignant transformation. The patient should receive thorough education regarding HPV infections which spread via sexual contact. Therefore, the avoidance of direct sexual contact should be strongly advocated to decrease transmission of the disease.[8] Additionally, female partners of men should receive a close follow-up. 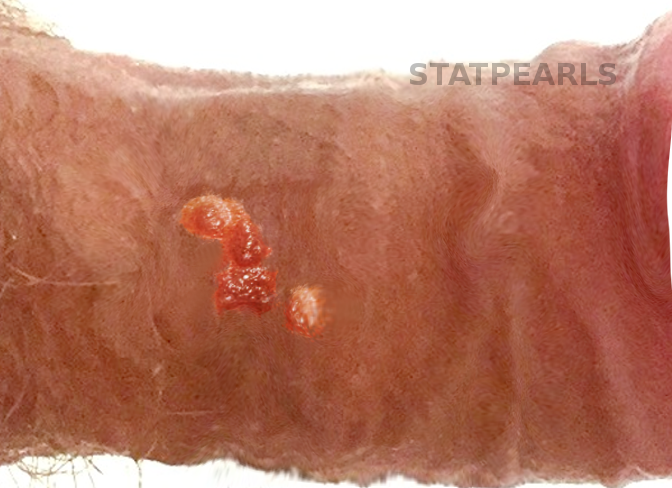 Deen K,Burdon-Jones D, Imiquimod in the treatment of penile intraepithelial neoplasia: An update. The Australasian journal of dermatology. 2017 May;     [PubMed PMID: 26952903]