The route of administration (ROA) and the dose of a drug have a significant impact on both the rate and extent of bioavailability. The dose of a drug is indirectly proportional to its bioavailability (Equation 5). For a drug with relatively low bioavailability, a larger dose is required to reach the minimum effective concentration threshold. The various routes of administration each contain a unique capability to facilitate a certain plasma drug concentration for a certain length of time. In many cases, altering the route of administration calls for an alteration of the dosage. For example, an oral drug requires passage through the gastrointestinal (GI) system, which would make it subject to intestinal absorption and hepatic first-pass metabolism.[4] On the contrary, an intravenously delivered drug (IV drug) is assumed to be immediately delivered to the systemic circulation. It does not require consideration of absorption or first-pass metabolism to determine adequate dosage.

A common clinical experience where an appreciation for bioavailability becomes important is the interactions between warfarin and albumin in the plasma. Warfarin has a propensity for binding with human serum albumin. Albumin-warfarin binding inactivates warfarin and reduces the fraction of active, free warfarin in the systemic circulation. When albumin sequesters warfarin in the blood, both the clearance and bioavailability of warfarin is reduced.[18] It may be necessary to restate that bioavailability refers to the fraction of active drug concentration in the plasma; albumin-bound warfarin is not an active form of warfarin. This phenomenon implies the monitoring of serum albumin and dietary choices (especially in regard to protein) when evaluating an adequate warfarin dose to prevent toxicity or inefficacy. 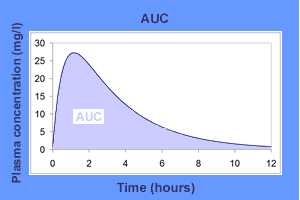