Behavior modification is a psychotherapeutic intervention primarily used to eliminate or reduce maladaptive behavior in children or adults. While some therapies focus on changing thought processes that can affect behavior, for example, cognitive behavioral therapy, behavior modification focuses on changing specific behaviors with little consideration of a person’s thoughts or feelings. The progress and outcome of the intervention can be measured and evaluated. A functional analysis of the antecedents and consequences of the problem behavior(s) must be identified. This leads to the creation of the specific target behaviors that will become the focus of change. Then, certain variables can be manipulated via reinforcers and punishments to change problem behavior(s). The goal is to eliminate or reduce the maladaptive behavior.[1][2][3]

Behavior modification is a type of behavior therapy. B. F. Skinner demonstrated that behavior could be shaped through reinforcement and/or punishment. Skinner noted that a reinforcer is a consequence that increases the likelihood of behavior to recur, while punishment is a consequence that decreases the chance. Positive and negative are used in mathematical terms. Positive indicates that something is added, and negative indicates something is subtracted or taken away. Thus, positive reinforcement occurs when a behavior is encouraged by rewards. If a child enjoys candy and cleaning the room is the desired behavior, the candy is a positive reinforcer (reward) because it is something that is given or added when the behavior occurs. This makes the behavior more likely to recur. Negative reinforcement is removing a stimulus as the consequence of behavior but results in a positive outcome for the individual. For example, a fine is dropped, and a person no longer has to go to jail. The removal of the negative stimulus (the fine) results in a positive outcome for the individual, no jail time.

Conversely, positive punishment is the addition of an adverse consequence. For example, a child gets spanked when he crosses the street without holding his mother’s hand. He then no longer crosses the street alone. The spanking is positive punishment because it is a consequence added to the situation that decreases the likelihood of the child crossing the street alone. Negative punishment is taking away favorable consequences to reduce an unwanted behavior. For example, if Emily doesn’t finish her homework on time, her cell phone gets taken away. She makes it a priority to finish her homework immediately after school before she does anything else. Removal of the cell phone would be a “negative” because it takes something away, decreasing the chance that she won’t finish her homework the next time.

Reinforcement and punishment both work independently, as well as together, as part of a behavior plan. Positive reinforcement works exceedingly better and faster than punishment. In child psychiatry, parents often come to the office angry and frustrated with their child because “nothing works.” They have tried multiple types of punishments when bad behavior has occurred using removal of toys or privileges away or placing a child in time out. Often positive types are not being reinforced. One immediate benefit of behavior modification plans is the shift away from solely punishing unwanted behavior to also rewarding good behavior.

In table 1, note that punishment and reinforcement have nothing to do with good or bad behavior, only if it increases or decreases the likelihood of the behavior to recur.

In child psychiatry, behavior modification is often part of treatment planning when a child is diagnosed with attention-deficit hyperactivity disorder (ADHD), oppositional defiant disorder, conduct disorder, intermittent explosive disorder, or other externalizing disorders (as opposed to internalizing disorders like major depression). While behavior therapy is not limited to externalizing behavior disorders, it is often a key part of the treatment plan because the presenting problem is behavior-related.[4][5][6][7].

Applied Behavioral Analysis (ABA) is one of the common therapeutic technique used in behavior modification. It has been proven very effective in those diagnosed with autism spectrum disorders and other similar developmental disorders.

Behavior modification is also a component of Parent-Child Interaction Therapy (PCIT), which teaches specific skills to the parents that they can use to help improve physical and verbal exchanges with their children. PCIT is an evidence-based intervention for preventing child abuse & neglect, helpful for children who exhibit disruptive behavior and/or have experienced trauma, those on the autism spectrum, and has been shown to decrease child’s risk of antisocial and criminal behavior later in life.

The Triple P – Positive Parenting Program draws on social learning, cognitive therapy, behavioral modification and developmental theory as well as an exploration into risk factors associated with the development of social and behavioral problems in children. It aims to empower parents with the skills and confidence they need to be self-sufficient and to be able to manage family issues without ongoing support.

Many reviews and meta­analyses of the research literature have established that behavioral treatments—including brief intervention, marital and family therapy, behavioral couples therapy, relapse prevention, and other cognitive-behavioral treatments in addition to community reinforcement and contingency management approaches—are among the most effective treatments for AUDs[8][9]

A behavior plan should not be started if it cannot be appropriately executed with consistency and longevity. Often, shaping, which is reinforcing and rewarding behavior as it approaches the desired behavior, is needed before the desired behavior is fully reached. Perfection cannot be the expectation from a behavior plan. Mistakes and setbacks are common when a change in behavior is expected, so consistency and patience are important from the caretakers and the clinician. If a behavior plan is only partially enforced, then this can lead to worsening behavior.

A “token economy” is synonymous with a behavior modification plan. A token (sticker, chip, point, tally) is anything that can be earned by exhibiting the desired behavior that can then be exchanged for reinforcers.

Reinforcers or rewards are a key part of a behavior plan but are unique to each child. The reinforcement has to be of value to the child for the program to be effective. A child may be motivated to make her bed every day if she gets a sucker every time she does it, but she may not make her bed if she gets extra reading time. She has to value the reward for the reward to be valued.

Reinforcers and punishments must happen at the time of the behavior to increase the likelihood of success of a behavior modification plan. The more immediate to the behavior the better. For example, praising a child for using the toilet while he is using it versus later that day. The reinforcer must be appropriate, e.g., giving a child a sticker every time he says please, or giving a teenager extra screen time for a good attitude. And lastly, the reinforcer must be consistent where the behavior is rewarded by all caretakers as previously agreed upon and not to avoid punishment due to caretaker guilt or inconvenience.

A behavior modification plan can be started and implemented with an individual or by a team of people. A parent, teacher, or childcare provider can start a plan. Often, the behavior plan can be implemented in multiple settings, like at school and home (rewards for turning in homework assignments to the teacher, and rewards for cleaning your room by the parent). The broader the settings for the behavior plan, the better.

Time is needed to define the problem behavior. Then the desired behavior has to be decided upon with appropriate rewards. If punishment is considered, specific punishments should go along with specific aberrant behavior.

The mainstay of behavior modification plans is consistency.

Resistance in the beginning, from both the child and the parent or teacher, is to be expected. Children are often opposed to trying anything new because they are tired of being punished and reprimanded for their aberrant behavior. They do not want any more privileges or items taken away or banished. They may have low self-esteem or lack confidence that they can adequately fulfill the behavior plan. This is where shaping is important. If they come close to achieving the desired behavior, they can be rewarded in part or whole for their effort with the goal to one day reach the goal fully.

Parents or authority figures are sometimes resistant because they are angry or frustrated with the child and do not want to reward them for positive behavior. They may also be worried that it will not work. It may be a new way of thinking which is challenging and requires work to enforce consistently.

Behavior therapy achieves goals in therapy that medication alone may not be able to accomplish. It has long-lasting effects on the individual even after the behavior plan is no longer in place because the new behavior is already established. Behavior can change the way a person thinks and feels about themselves which in psychiatry is an ultimate goal.[10][11][12][13][11]

A behavior modification plan can be started and implemented with an individual or by a team of individuals that includes the mental health nurse, psychologist, social workers, primary care provider, parent, teacher, or childcare provider. Often, the behavior plan can be implemented in multiple settings, like at school and home (rewards for turning in homework assignments to the teacher, and rewards for cleaning your room by the parent). The broader the settings for the behavior plan, the better. Interprofessional involvement has been shown to improve health care quality and outcomes for patients, clients, families, and caregivers.

Behavior therapy achieves goals in therapy that medication alone may not be able to accomplish. It has long-lasting effects on the individual even after the behavior plan is no longer in place because the new behavior is already established. Behavior can change the way a person thinks and feels about themselves which in psychiatry is an ultimate goal. 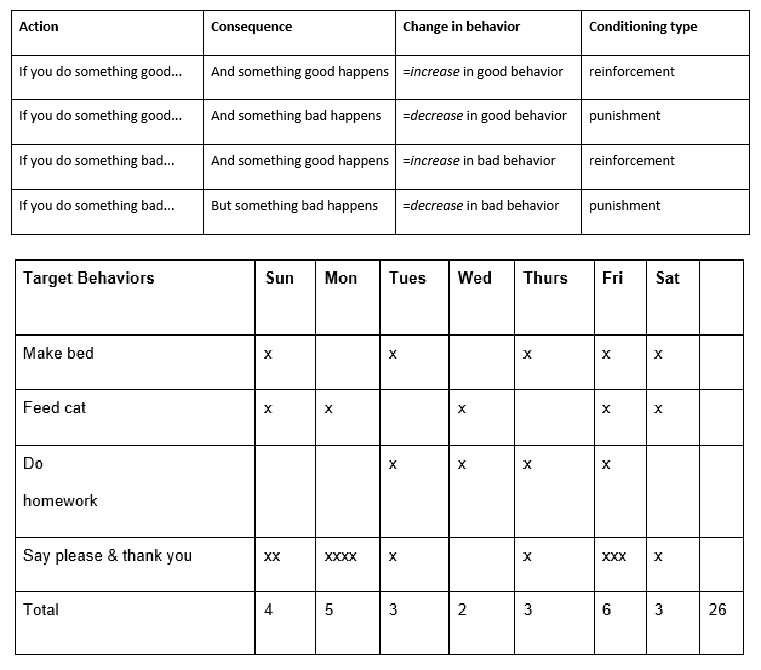 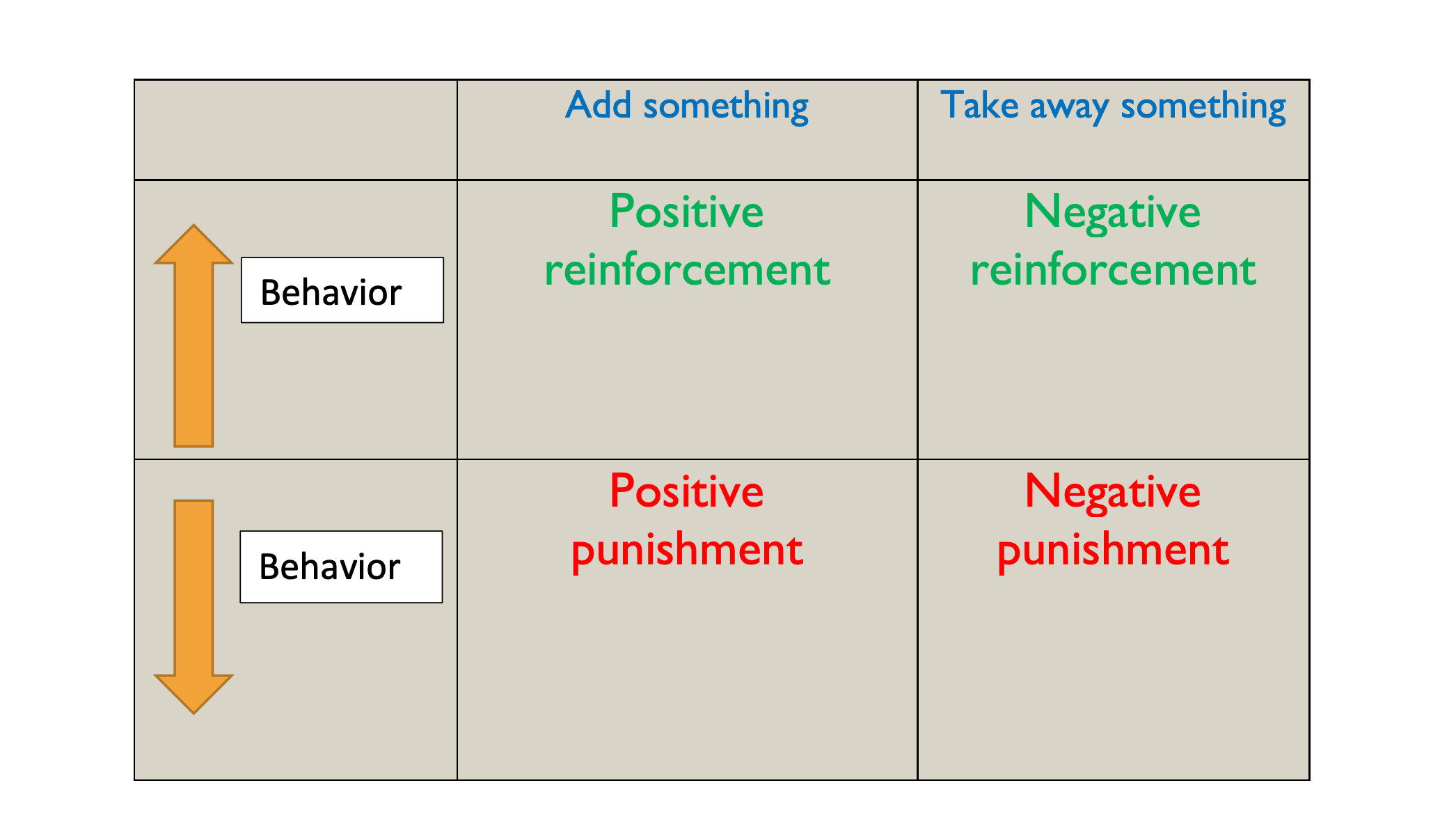