An azygos lobe is a rare, anatomical variant of the upper lobe of the right lung found in approximately 1% of anatomic specimens and 0.4% of chest radiographs [1]. It forms during embryological development when the posterior cardinal vein, the precursor of the upper thoracic segment of the azygos vein, erroneously migrates through the upper lobe of the lung. Normally, the posterior cardinal vein migrates over the apex of the right lung to its final position in the mediastinum. Awareness of this anatomical variant and its characteristic x-ray features is important among clinicians because its presence may be confused for processes such as bulla, masses, or abscesses.

An azygos lobe is not a true accessory lobe as it does not have a bronchus or blood supply. It can be more accurately described as an anatomically separated segment of the right upper lobe. It does not serve any known physiologic purpose aside from gas exchange.

An azygos lobe is formed during embryological development when the right posterior cardinal vein aberrantly migrates through the upper lobe of the right lung rather than over the apex. As a result, two pleural layers are carried through the right upper lobe creating a fissure known as the azygos fissure (See Figure 1). While most of the posterior cardinal veins regress during embryological development, the right-sided supracardinal veins form a portion of the inferior vena cava, the intercostal veins, the hemiazygos vein, and the azygos vein. Interestingly, the failure of regression of left-sided supracardinal veins has been reported. This failure leads to such anomalies as the persistence of left superior and inferior vena cava [2].

The lymphatic supply to an azygos lobe does not differ from that of normal lung. Lymphatic vessels of the respiratory bronchioles merge and follow the bronchiole tree to the hilum.

The nerve supply of an azygos lobe is analogous to the nerve supply of any other segments of the lung. The hilum of each lung contains a pulmonary plexus composed of efferent and afferent nerve fibers from the vagus nerve as well as fibers from the sympathetic trunk and cardiac nerve plexus [5]. The pulmonary plexus innervates the bronchial tree and the visceral pleura. The pulmonary plexus is divided into the anterior and posterior divisions that lie in front of the lung and behind the lung, respectively. The majority of the supply is provided to the bronchi and bronchioles and control functions such as bronchodilation, bronchoconstriction, and glandular secretion. Afferent fibers relay impulses from stretch receptors in alveolar walls.

An azygos lobe usually presents as an incidental finding on a chest x-ray or computed tomography that requires awareness by the operating surgeon. Technical problems in thoracoscopic procedures may arise with an azygos lobe. Sympathectomies and lobectomies involving azygos lobes have commonly been reported.

Sympathectomy is a surgical procedure involving the removal of a portion of the sympathetic nerve trunk in the thoracic region. The procedure is primarily used to treat hyperhidrosis of the palms. Other conditions that are less commonly treated with sympathectomy include Raynaud disease, complex regional pain syndrome, and facial blushing. An analysis of 1731 cases of bilateral video-assisted thoracic sympathectomies (VATS) reported that the most common technical difficulty was pleural adhesions in 116 cases (6.7%) followed by azygos lobes which were seen in 7 patients (0.4%) [6]. Although relatively rare, an azygos lobe may be associated with an anomalous azygos vein that is covering the upper thoracic chain. A review of 2272 patients who underwent endoscopic thoracic sympathectomy (ETS) for hyperhidrosis reported 20 cases of an azygos lobe [7]. Of those 20 cases, two distinctive variations were described in which the venous drainage was either present (type 2) or in which the downward drainage system was not present (type 1). Given that the surgeon is made aware of the anomaly, usually by chest x-ray or CT scan, there are effective techniques for performing the procedure. The study reported similar results to those obtained in patients without an azygos lobe.

Lobectomy is the surgical removal of a lobe of the lung, often performed in the early stages of non-small cell lung cancers. The procedure involves ligation of contributing pulmonary arteries, pulmonary veins, and lobar bronchi. Several cases of primary lung cancer arising from an azygos lobe have been reported in the literature. Technical difficulties were reported, but the outcomes were desirable, nonetheless. One study involving the removal of an azygos lobe containing positron emission tomography (PET) positive nodule with the use of VATS illustrated a technique involving caudal traction on the azygos lobe in order to allow circumferential exposure of the lobe and identification of the bronchovascular pedicle without the need for thoracotomy or extensive azygos vein dissection [8]. Similar techniques were employed in other reported cases. Nonetheless, the operating surgeon should be made aware of this anatomical variant prior to initiating the surgery.

The appearance of an azygos lobe on plain film or computed tomography (CT) scan may cause it to be confused with an abscess, bulla, or pneumothorax. The fine, convex line that crosses the apex may mimic the appearance of the wall of a bulla or the pleural line seen in a pneumothorax. In addition, consolidation of an azygos lobe has been reported and may mimic a lung mass. However, there have been no reported adverse events or outcomes attributed to such confusions. 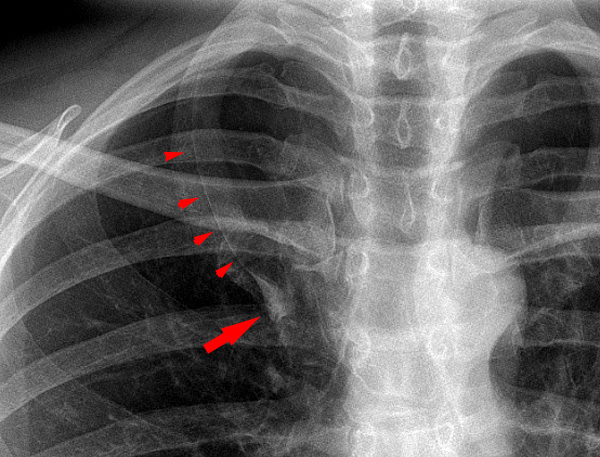