Adrenal myelolipoma is a  benign adrenal neoplasm predominantly composed of mature adipose tissue and intermixed myeloid tissue. They comprise 6-16% of adrenal incidentalomas and are the second most common cause after adrenal adenomas. The increased prevalence of adrenal myelolipomas is due to increased detection because of the wider accessibility of computed tomography (CT) and magnetic resonance imaging (MRI) scans. Rarely myelolipomas are encountered outside the adrenal glands and are termed as extra-adrenal myelolipoma. The pathogenesis of adrenal myelolipoma is either believed to be due to metaplastic change in the mesenchymal cells or as a result of overstimulation by adrenocorticotrophic hormone (ACTH). Clinically, they may be asymptomatic or present with abdominal pain, nausea, or vomiting. On CT scan, they appear as well-circumscribed, hypodense masses with an attenuation of -90 to -120 HU. Surgical resection is indicated in cases of significant growth or hormonal hypersecretion. [1][2][3][4]

The etiopathogenesis of adrenal myelolipomas is not definitively known. One hypothesis suggests that stimuli such as necrosis or inflammation could lead to the metaplasia of the reticuloendothelial cells, which could lead to the development of adrenal myelolipomas. This hypothesis is supported by the increased incidence of the lesion in the advanced years of life. Another hypothesis claims that adipocytes develop from the mesenchymal stem cells in the endothelium; this results in inflammation leading the adrenal cortex to secrete mediators responsible for the recruitment of hematopoietic progenitors. Lastly, Hans et al. noted in their experiments that injection of anterior pituitary extract in rats leads to the transformation of the adrenal cortex into bone marrow-like tissue. Therefore, it was hypothesized that excess ACTH could be responsible for the pathogenesis of adrenal myelolipomas. This theory is supported by the increased incidence of adrenal myelolipomas in congenital adrenal hyperplasia (CAH), where the levels of ACTH can be very high. Adrenal myelolipoma is often associated with conditions like Cushing disease, obesity, hyperlipidemia, hypertension, and diabetes which can be considered as adrenal stimulants. Other theories propose that a stressful lifestyle and an unbalanced diet may also play a role in the natural history of the neoplasm.[4][5]

Adrenal myelolipomas are the second most common adrenal incidentalomas comprising 6 to 16% of adrenal incidentalomas. They have an approximate autopsy prevalence of 0.08 to 0.2%. They are usually recognized in adulthood, with a median age of diagnosis around 51 years. There is no gender predilection. There may be a slight right-sided predilection, as reported by some studies.[6]

On gross pathologic examination, a cut section of a myelolipoma has a variegated appearance consisting of bright yellow areas of fat, dark red areas of hematopoietic myeloid tissue, and areas with intermixed red and yellow components. On histopathologic examination, myelolipomas are predominantly composed of fatty areas with interspersed hematopoietic tissue components. These fatty elements and hematopoietic areas may be clearly separated, or they are often intermixed. Tissue analysis often reveals a variable amalgamation of myeloid and erythroid cells, megakaryocytes, and occasionally lymphocytes. In an isolated adrenal myelolipoma, a peripheral rim of normal adrenal cortical tissue can be commonly identified distinctly from the mass. Rarely the myelolipomas can contain osteoid tissue in addition to the myeloid tissue. The hemorrhagic areas may be partly replaced by fibrotic tissue or may undergo calcification.[7]

The most common presenting symptoms for adrenal myelolipomas are as follows:

Rarely, dyspnea, back pain, fever, weight loss, and virilization can be the presenting symptoms of adrenal myelolipomas.

Four recognizable clinicopathologic patterns of adrenal myelolipomas are as follows:

Myelolipomas occurring in an otherwise normal adrenal gland are the most common pattern of presentation. They are asymptomatic and are incidentally identified during the imaging investigation performed for some other reason.

Retroperitoneal hemorrhage is the most common complication occurring in adrenal myelolipoma. Isolated larger lesions (typically over 4 cm in size) and those predominantly composed of fat (greater than 50%) have a greater propensity for a hemorrhagic event.

Myelolipomas occurring outside the adrenal gland is most commonly found in the retroperitoneum, where presacral or perirenal location is reported as the most common. Patients usually have no endocrine disorder or acute hemorrhage.

Ultrasonography (USG), CT, and MRI are all highly beneficial in the diagnosis of adrenal myelolipoma, with CT scan being the most sensitive for the identification of fat within the lesions. As these tumors are nonfunctional, endocrinological tests are not useful as these lesions are mostly functionally inert. The differential diagnosis of fat-containing retroperitoneal masses would include retroperitoneal lipoma or liposarcoma and renal angiomyolipoma.

Myelolipoma has the typical appearance of a hyperechoic mass with intermixed hypoechoic regions. Echogenicity is mainly determined by the variable proportions of the constituent elements in the lesion. The areas of intermixed fatty and myeloid tissue are the most echogenic, whereas regions of pure fat may appear hypoechoic. Because of inhomogeneous architecture, myelolipomas often have heterogeneous echogenicity. Calcification foci appear hyperechoic with acoustic shadowing. Myelolipoma has vague and no appreciable margins due to having almost the same echogenicity as surrounding retroperitoneal fat. Hemorrhage alters the sonographic picture, with hemorrhagic areas appearing hypoechoic compared with fat.[8][9]

CT is the preferred imaging modality for the diagnosis of adrenal myelolipoma. It is seen as a hypodense well-circumscribed heterogeneous mass with an attenuation value of -90 to -129 HU. Almost all myelolipomas have some focus of fat, although the fatty tissue focus may be very small. Large amounts of fat are frequently encountered with “smoky” or "variegated" areas of interspersed higher-attenuation tissue. This denser tissue has attenuation values of 20 HU to 30 HU, inferring the presence of both fat and myeloid elements. Myelolipomas are usually relatively well-circumscribed; however, due to the presence of abundant fat, they can be difficult to distinguish from surrounding retroperitoneal fat. Foci of punctate calcification may be seen in 25% to 30% of cases. CT is the most sensitive for detecting hemorrhage, which may be hyper to hypodense depending on the age of evolution.

The predominantly fatty areas in myelolipoma appear hyperintense on T1 MR images and intermediate to hyperintense on T2. Admixed marrowlike elements have medium intensity signals similar to that of the spleen. Fat-suppression techniques are best for demonstrating the fat in a myelolipoma with MR imaging. The presence of marrow-like elements or hemorrhage results in persistent areas of increased signal intensity on fat-suppressed MR images. Opposed-phase imaging demonstrates signal loss in admixed voxels containing both fat and myeloid tissue, which is also described for adrenal adenoma and other masses with mixed components. At MR imaging, the signal intensity will vary depending on the presence and age of the hemorrhage. Post-contrast images show a striking enhancement. The imaging features of extra-adrenal myelolipoma are similar to those of adrenal myelolipoma and do not allow the distinction of extra-adrenal myelolipoma from other fat-containing tumors.

Adrenal myelolipomas typically do not demonstrate an avid FDG uptake, which is usually less than that of the liver. However, in rare instances, the adenomatous and hematopoietic elements can show an increased FDG uptake.

Management of adrenal myelolipoma should be decided upon the size of the lesion and the presence of symptoms. Small lesions measuring less than 5 cm and those who are asymptomatic are usually monitored via imaging over a period of one to two years. According to various studies, it is suggested that symptomatic tumors or myelolipomas larger than 7 cm should undergo elective surgical excision. The approach is based on the reported incidence of life-threatening emergencies caused by spontaneous rupture and hemorrhage within large lesions. Conventional or endoscopic access may be chosen according to the size of the tumor. Mini-invasive and endoscopic techniques are best utilized for smaller-sized lesions, depending on the expertise of the operator. Conventional methods, including transabdominal, lumbar, subcostal, or posterior access laparotomy operations, have been described in the literature. An extraperitoneal approach is preferable as it leads to quicker recovery of the patient and lesser postoperative complications. The midline approach is indicated for masses larger than 10 cm or in cases where there are adhesions and infiltration of the surrounding structures. Follow-up is mandatory regardless of which surgical method has been employed. There is no evidence of malignant transformation in the literature.[10][11][12]

2. Adrenal carcinoma: These are big lobulated tumors with a heterogeneous appearance due to hemorrhage and necrosis. They have irregular margins and invade the surrounding structures, inferior vena cava, kidney, and liver. They have an attenuation value of greater than 10 HU and show increased uptake on the PET scan.

3. Retroperitoneal liposarcoma: This is a slow-growing tumor of the retroperitoneal region which is composed of adipocytes and radiologically appears similar to an adrenal myelolipoma.

4. Renal angiomyolipoma: Angiomyolipomas are tumors comprised of fat, blood vessels, and muscle cells. These are large, heterogeneous appearing tumors that can invade through the renal capsule. The radiological appearance is similar to that of an adrenal myelolipoma with negative attenuation values; however, this is seen to arise from the kidney.

Healthcare workers like the primary caregiver and nurse practitioner should be familiar with myelolipomas and their presentation. Depending on the location, the appropriate specialist should be consulted. Adrenal myelolipoma is a rare benign neoplasm predominantly composed of mature adipose tissue and intermixed myeloid tissue. Myelolipomas are most often encountered in the adrenal gland but may rarely occur in other sites. The majority of small lesions can be monitored as long as one is absolutely sure there is no occult malignancy. Larger lesions may need excision. 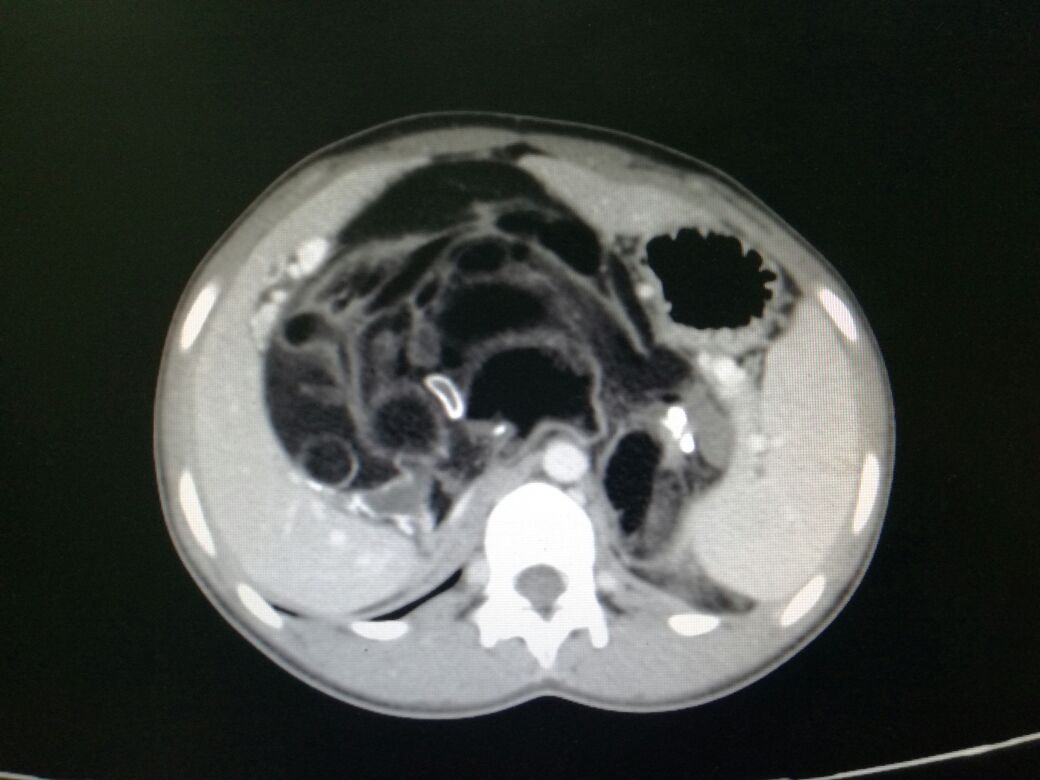