The abducens nuclei appear as paired nuclei, located within the pons at the pontomedullary junction of the brainstem, comprised primarily of motor neurons and interneurons.[1][2] Neurons from the abducens nuclei provide innervation to the lateral rectus muscles and allow for conjugate horizontal gaze by sending signals to the contralateral oculomotor nuclei that innervate the medial rectus muscles.[3]

The paired abducens nuclei are in the medial and dorsal brainstem within the pons at the level of the pontomedullary junction, immediately lateral to the medial longitudinal fasciculus.[4][2] The nuclei are positioned beneath the floor of the fourth ventricle and separated from it by the facial nerve genu, which curves over their dorsal and lateral surfaces. About 70% of the neurons arising from each abducens nucleus are motor neurons that form the abducens nerve fascicles and innervate the ipsilateral lateral rectus muscle. Approximately 30% are internuclear neurons that are involved in the control of the conjugate gaze. A small percentage of neurons project to the cerebellar flocculus, which functions in gaze holding.[4]

As early as 20 weeks gestation, the abducens nucleus is identifiable as a mass of cells located lateral to the facial nerve genu and medial to the medial vestibular nucleus in an area that will later become the mature pons.[5] The nucleus enlarges more quickly toward the end of gestation between 20 and 43 weeks in the rostrocaudal axis. Its composition is a heterogeneous group of motor neurons and interneurons that this activity describes in detail below. There is a hypothesis that during development, multiple aberrant abducens nerve roots branch out from the nucleus and eventually undergo resorption; therefore, failure to resorb these roots may lead to the development of replicated and/or branched nerves.[6]

The abducens nucleus consists of motor neurons, interneurons, and a small percentage of neurons projecting to the cerebellar flocculus. Signaling pathways through the nucleus allow for gaze holding and conjugate horizontal gaze during the vestibulo-ocular reflex and for the generation of saccades.

Motor nerve fibers course ventrally through the pons after exiting the abducens nucleus and form the abducens nerve fascicle.[1] The fibers then exit the brainstem near the midline to form the abducens nerve, emerging from the horizontal sulcus in between the pons and medulla, just lateral to the bundles of the corticospinal tract. The abducens nerve fibers then course rostrally along the surface of the clivus within the subarachnoid space anterior to the basilar pons, pass under the petroclival ligament through the Dorello canal, and enter the cavernous sinus. They then pass through the cavernous sinus in close association with the internal carotid artery and penetrate the orbit via the superior orbital fissure, within the annulus of Zinn, to innervate the ipsilateral lateral rectus muscle.[2][1]

The abducens nucleus plays a significant role in coordinating the conjugate gaze, and the generation of rapid saccades conjugate eye movements that allow the center of gaze to shift from one part of the visual field to another.[8] Cerebral control of saccades comes from the parietal eye fields (PEF) and the frontal eye fields (FEF), which transmit signals to the superior colliculus.[9] The superior colliculus then projects to the paramedian pontine reticular formation (PPRF) of the pons, also known as the horizontal gaze center. The PPRF transmits signals to the ipsilateral abducens nucleus that, in turn, sends the signals via internuclear neurons that exit the abducens nucleus and ascend in the contralateral medial longitudinal fasciculus (MLF). These then synapse with neurons in the medial rectus subnucleus of the oculomotor nucleus to innervate the medial rectus muscle. This pathway produces equal innervation of the horizontal yoke muscles, the ipsilateral lateral rectus, and contralateral medial rectus, to maintain conjugate gaze via coordinated activity. This coordination of input allows for conjugate horizontal gaze during saccades via the PEF and FEF as well as during voluntary eye movements.

Different afferent inputs are involved in the control of the twitch and non-twitch muscle fibers of the lateral rectus muscle.[4] Twitch motoneurons in the abducens nucleus receive premotor inputs from the burst neurons in the PPRF and the vestibular nuclei, allowing for the generation of eye movements. The non-twitch motoneurons are involved in gaze holding and receive eye position information from the nucleus prepositus hypoglossi (NPH), which lies on the floor of the fourth ventricle.

Damage to the abducens nuclei can occur from brainstem trauma, infiltration, ischemia, inflammation, compression, demyelination, or metabolic insult.[11] Congenital syndromes affecting the abducens nucleus are rare, but there is documentation of some cases.

Abducens nerve paresis may serve as a non-localizing sign of increased intracranial pressure due to the long subarachnoid course of the nerve between the brainstem and clivus, where it can get stretched at the sharp edge of the petrous bone or compressed between the pons and the basilar artery.[12] Sever and or persistent abducens nerve palsy may raise concern for an occult neoplasm and prompt neuroradiologic investigation.

The one-and-a-half syndrome consists of an ipsilateral horizontal gaze palsy combined with an ipsilateral internuclear ophthalmoplegia (INO).[11] This condition occurs from damage to either the abducens nerve nucleus or the PPRF, with concomitant injury to the ipsilateral MLF, which originates from the contralateral abducens nucleus and has crossed the midline. Therefore, the only preserved horizontal eye movement will be the abduction of the contralateral eye (hence the term “one-and-a-half syndrome”). This syndrome may result from brainstem ischemia, MS, tumor, hemorrhage, trauma, infection, or another cause.

Congenital absence or hypoplasia of the abducens nucleus may occur with Mobius syndrome and Duane retraction syndrome.[14] Mobius syndrome is a rare neurological disorder involving weakness or paralysis of multiple cranial nerves, most often CN VI and CN VII.[14] Patients present with facial diplegia along with absent abduction or absent horizontal gaze bilaterally. Hypoplasia or atrophy of cranial nerve nuclei may be visible on neuroimaging, and most cases appear to be due to a prenatal vascular insult to the brainstem. Duane retraction syndrome is a congenital eye movement disorder characterized by limitation or absence of abduction, variable limitation of adduction, and globe retraction, causing palpebral fissure narrowing on attempted adduction.[15] All patients have abnormal horizontal eye movements, and it appears to result from congenital agenesis of the abducens nucleus on the ipsilateral side. In some cases, patients have been found to have absent abducens nuclei and nerves on neuroimaging. Innervation of the lateral rectus in these cases is provided by the ipsilateral CN III, which produces globe retraction due to concomitant contraction of the medial and lateral rectus muscles on attempted adduction. 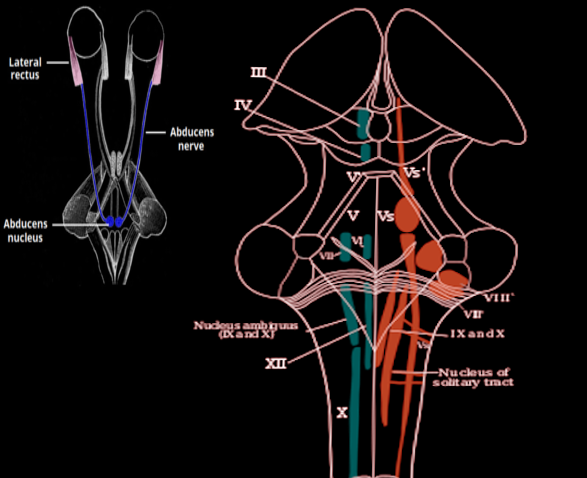 Gates P, The rule of 4 of the brainstem: a simplified method for understanding brainstem anatomy and brainstem vascular syndromes for the non-neurologist. Internal medicine journal. 2005 Apr;     [PubMed PMID: 15836511]