Upadacitinib is a new FDA-approved second-line agent for treating moderate to severe active rheumatoid arthritis (RA) in patients who have not shown an adequate response or intolerance to the first-line agent methotrexate.[1] The agent is a second-generation selective Janus kinase (JAK) inhibitor targeting the JAK1 enzyme.[2] Upadacitinib first received FDA approval on August 16, 2019, based on positive and promising results from its multinational phase III trials in subjects with moderate to severe rheumatoid arthritis.[3]

Upadacitinib use with other JAK inhibitors (jakinibs) or robust immunosuppressants like azathioprine and cyclosporine is not advised. Although its use in combination with nonbiologic disease-modifying antirheumatic drugs (DMARDs) such as methotrexate is supported, its use with biological DMARDS is not recommended.[3] When combined with first-line therapy methotrexate, upadacitinib repressed disease progression on radiographic imaging and maintained clinical efficacy.[1]

Upadacitinib exerts its mechanism of action by inhibiting intracellular cytoplasmic enzymes Janus kinases (JAK), a group of four tyrosine kinases(JAK1, JAK2, JAK3, and TYK2) involved in the process of immune-mediated inflammatory diseases (IMIDs).[4] The inhibition of JAKs further hinders growth factor and cytokine-mediated signals from being transduced intracellularly by the JAK-STAT pathway.[4]

Upadacitinib is available as 15 mg and 30 mg extended-release (ER) tablets for oral consumption.

Before starting management with upadacitinib, immunizations should be up-to-date, and assessment for underlying TB (active or latent) should be evaluated. Other assessments include liver function, viral hepatitis panel, and pregnancy status in females of childbearing age. Upadacitinib is not recommended to be used concomitantly with other JAK inhibitors, biologic DMARD agents, or strong immunosuppressants (azathioprine and cyclosporine).

The recommended daily dosage is 15 mg orally as a monotherapy.[3] The medication can be taken with or without food and is recommended as a whole 15 mg tablet without splitting or crushing the tablet.

The recommended daily dosage is 15 mg orally as a monotherapy. The medication can be taken with or without food and is recommended as a whole 15 mg tablet without splitting or crushing the tablet.

For adult patients above the age of 65, the recommended daily dosage is 15 mg once a day.

Upadacitinib has a number of adverse effects.[8] These include:

The use of upadacitinib with biological DMARDS (infliximab, adalimumab, etanercept, abatacept, tofacitinib) and immunosuppressants (azathioprine, tacrolimus, cyclosporine, intravenous (IV) corticosteroids, and 6-mercaptopurine) is not recommended.[9] Administration of a live attenuated vaccination soon before or during treatment is not advised.[10]

Prior to initiating treatment with upadacitinib, negative tuberculosis (TB) test is required as it may activate a latent TB infection. During the course of treatment with upadacitinib, patients should also be tested for TB routinely. A complete blood count (CBC) should also be monitored before starting therapy and routinely, as it is not recommended to initiate upadacitinib in subjects with an absolute lymphocyte count (ALC) below 500 cells/mm^3 and absolute neutrophil count (ANC) below 1000 cells/mm^3. Lymphopenia, neutropenia, and anemia have been reported. Liver function tests (LFT) should be checked before beginning therapy and regularly after that, as patients with severe hepatic impairment are not recommended to start treatment.[11] The lipid panel should also be monitored 12 weeks after treatment, as increases in total cholesterol, low-density lipoprotein (LDL) cholesterol, and high-density lipoprotein (HDL) cholesterol may increase following treatment.

Patients should also be monitored for serious infections while on therapy, as severe bacterial, viral, fungal, tuberculous, and opportunistic infections have transpired, which have led to hospitalization and mortality in patients receiving upadacitinib. In such occurrences, the treatment regime must be interrupted and halted. Monitoring for reactivation of previous hepatitis B virus (HBV) or HZV infections is recommended, as these infections were reported during clinical studies. Upadacitinib should be discontinued temporarily till HZV is resolved.[3]

Subjects at increased risk for skin cancers and are receiving treatment are advised to have routine skin examinations as they have an increased chance of non-melanoma skin cancers (NMSCs). Patients receiving upadacitinib with concomitant NSAID use should be monitored for new-onset gastrointestinal manifestations, as GI perforations have been reported during clinical studies.

Upadacitinib is metabolized in the liver by the cytochrome P450 (CYP) system, mainly the CYP3A4 enzyme, and eliminated in the feces, urine, and metabolites with a drug half-life of 8 to 14 hours (hrs).[3] Concomitant use with CYP3A4 Inhibitors and CYP3A4 inducers should be used with caution and is not recommended as it may disrupt the drug pharmacokinetics, further increasing or decreasing drug plasma concentration.[3]

Recent updates in upadacitinib use include an increased rate of all-cause mortality and sudden cardiovascular-associated mortality from concomitant use with another JAK inhibitor agent versus Tumor Necrosis Factor (TNF) inhibitors in subjects with RA. MACE includes cardiovascular mortality, MI, and stroke.

Upadacitinib is a second-generation selective Janus kinase inhibitor targeting the JAK1 enzyme. The agent is FDA-approved and indicated to treat active moderate to severe rheumatoid arthritis in patients intolerant or unresponsive to first-line therapy methotrexate (MTX). The care and management of rheumatoid arthritis patients require decisive care from an interprofessional team of healthcare professionals. Early clinical analysis and diagnosis can lead to more effective management strategies, further decreasing life-long complications and debilitation and increasing the quality of life. The interprofessional team can include a primary care physician (PCP), a rheumatologist, mid-level practitioners, nurses, a physical therapist (PT), and a pharmacist.

The rheumatologist and PCP should maintain continuous communication of their patient's care and updates on the latest guidelines on treatment. The patient should be thoroughly educated on rheumatoid arthritis and therapy with upadacitinib and its potential adverse effects. The interdisciplinary team should monitor the patient's CBC, liver enzymes, and lipid panel before initiating treatment and routinely afterward. Particular attention should be paid to the lymphocyte count, absolute neutrophil count, and hemoglobin (HB), as lymphopenia, neutropenia, and anemia may ensue during therapy. Treatment should be avoided or halted if the patient's absolute lymphocyte count is below 500 cells/mm3, the absolute neutrophil count is below 1000 cells/mm3, or the HB level is below 8 g/dL.

Patients should be advised about the broad range of adverse effects that may occur while on therapy. Routine follow-ups with the PCP and specialist are requisite to prevent complications, hospitalization, and mortality. New-onset gastrointestinal symptoms must be evaluated thoroughly, as GI perforation has been reported in clinical studies, particularly with concomitant NSAID use. Patients should also be counseled about the increased risk of severe infections, and any new-onset clinical manifestation should be reported and investigated.

In reproductive animal studies, upadacitinib was shown to cause injury to the developing fetus and be present in breast milk. During pregnancy, women should be advised and counseled about upadacitinib use and the likely effects on the fetus and to discontinue breastfeeding while on therapy. Women should also be counseled on contraception use while being treated and four weeks after discontinuation of treatment. Intercommunication between the healthcare team and their patients is imperative to establishing a solid physician-patient relationship. This can further increase medication compliance and decrease disease progression, improving the quality of life. 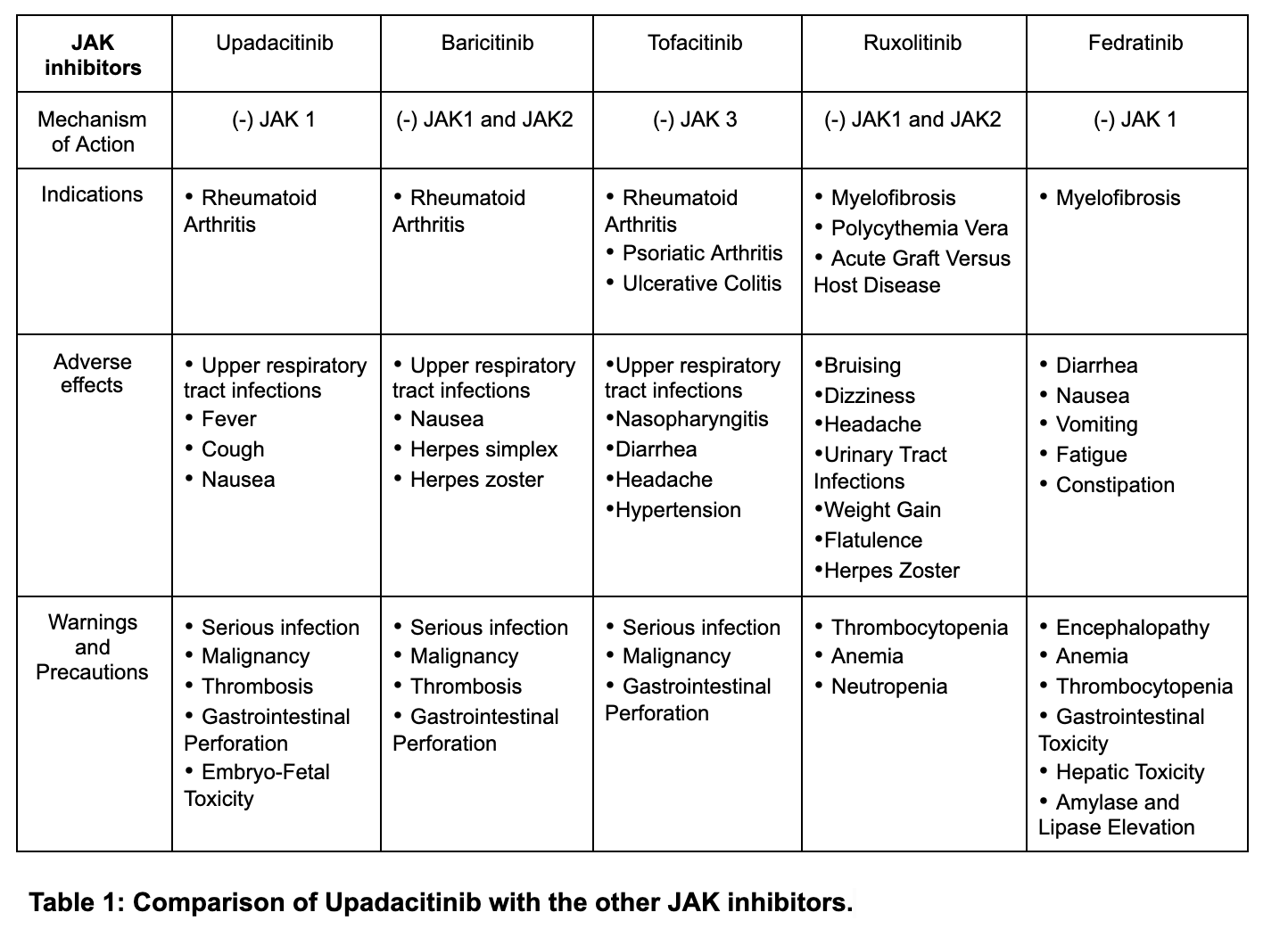 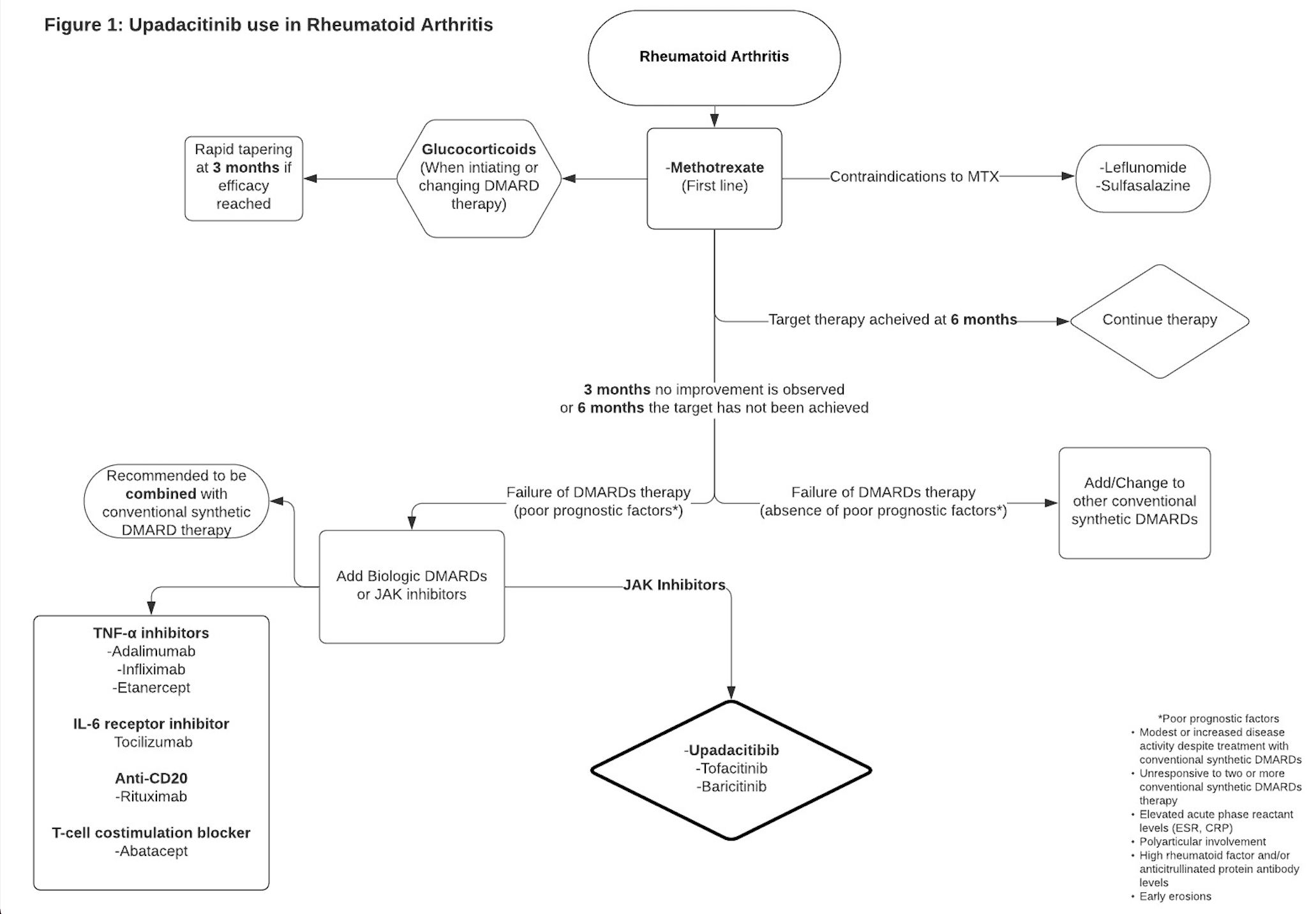