The videofluoroscopic swallow study is an important initial diagnostic study for dysphagia as it helps to see the relative structural motion of the upper aerodigestive pathway in real-time with the motion of food bolus passing through it. This activity outlines, and reviews the role of the healthcare team in managing patients who undergo a swallow study.

In 2010, over 16 million people in the US required treatment for dysphagia, either in the community or inpatient setting. It is estimated that nearly 50% of hospitalized patients have a swallowing disorder, exposing them to the risk of aspiration pneumonia, increased re-hospitalization, and increased mortality. By identifying at-risk patients early on, appropriate management can commence helping reduce the risk of aspiration. Aspiration pneumonia leads to an increased length of hospital stay from complications that can be avoided.

A holistic approach to nutritional needs can improve the patient’s overall quality of life, in addition to their psychological health. In elderly patients, difficulties with swallowing can cause anxiety around a meal, and panic associated with this activity of daily living can result in the individual socially isolating themselves. A videofluoroscopic swallow study is considered the gold standard diagnostic tool for detecting dysphagia. It can assess dysphagia that may not be picked up by clinical examination or patient reporting.[1][2]

The patient is usually seated in the upright position on a chair or wheelchair for the duration of examination to emulate the physiological position for swallow, with study views made in both the anterior-posterior and lateral views. The field of study is from the oral cavity to the upper esophagus. Fluoroscopic images are recorded on a screen of the patient’s oral intake, allowing the healthcare professional to review the study retrospectively in detail.

The clinician provides a selection of food and drink of different consistencies to chew and swallow. The selection of test food is based on the swallowing difficulty being investigated. The varying viscosities used are carefully selected by the speech and language therapist to account for the potential severity of dysphagia posed by the subject. These test foods/liquids are pre-mixed with barium as the contrasting agent. With the radio-opaque bolus, images are obtained at different stages of the swallowing process to highlight and analyze the cause of dysphagia.[3]

A videofluoroscopic swallow study is most often used to evaluate

Evaluations for dysphagia or aspiration are often performed

There are few contraindications. If the patient is grossly aspirating on an exam, then the exam can be performed quickly and carefully to gather limited information on why the aspiration is occurring / which structures are involved, but this must always be balanced against the risk of large volume aspiration of barium contrast medium, which can markedly impair respiratory function.

The patient usually must be able to sit or stand, and the exam is only rarely performed in a supine position.

Oropharyngeal cancers (more common in the 5th and 6th decades of life) can cause dysphagia by obstruction by the primary tumor or by the reduced movement of the mandible or tongue. Management options for oropharyngeal cancer are also known to cause dysphagia- surgical reconstruction (for example, the base of tongue resection) removes the normal anatomy involved in the moving of food boluses, whilst radiotherapy of the head and neck region causes physiological changes (e.g., mucositis, hyposalivation, and tissue fibrosis).

Neurological causes of dysphagia can occur acutely, for example, in stroke or brain injury. Conversely, they can progress more slowly over time as part of neurodegenerative conditions.

Approximately 780 000 individuals in the US have a stroke in a year, with aspiration pneumonia affecting one-third of stroke sufferers. This is as a result of abnormal/absent swallow reflex, inefficient lip closure, and limited movement of the tongue. It is therefore imperative to provide nutrition via a tube for the first few weeks of a recent stroke.[4]

With traumatic brain injuries, a common cause for dysphagia is the motor pattern reorganization following injury. This may be further prolonged by vocal cord paralysis following a long period of endotracheal tube intubation whilst in intensive care.

An estimated 80% of patients diagnosed with Parkinson disease have some degree of dysphagia (caused by both dopaminergic and non-dopaminergic disease pathways). Aspiration pneumonia is a leading cause of death in the course of Parkinson’s disease. Often patients may not clinically demonstrate signs of dysphagia, but it is picked up on the videofluoroscopic swallow study.

Iatrogenic causes include endotracheal intubation (which can cause damage to the recurrent laryngeal nerve supplying the vocal cord) and surgeries involving the head and neck or cardiothoracic surgery.

With aging, abnormality in the cough reflex may develop as a result of the reduction of sensitivity in both the pharyngeal and laryngeal passages. Coupled with delay in the initiation of the swallowing reflex and the slowing of food boluses passing along the oral and pharyngeal stages, illness can cause the elderly to be more prone to dysphagia and aspiration pneumonia. An estimated 13% of nursing home residents are deemed to have some degree of dysphagia. It is important for carers to liaise with speech and language therapists to identify individuals who are deemed vulnerable.

Other causes of dysphagia include:

38% of patients with multiple sclerosis, ALS (80% of patients are affected by the advanced stages of this disease. One in three patients demonstrates dysphagia from bulbar palsy. Cranial nerves IX, X, and XII are affected), muscular dystrophy, myasthenia gravis, dementia, and spinal cord injuries.[5][6][7][8][9]

To be able to interpret videofluoroscopic swallow studies, it is important to appreciate the stages of a normal swallow. These can be divided into oral preparatory, oral, pharyngeal, and esophageal stages as follows:

For liquids, the bolus is placed in the anterior mouth floor or against the hard palate. Initially, a seal is formed by the soft palate and posterior tongue to prevent liquid from entering the oropharynx. The tongue tip is then raised to the hard palate, propelling the liquid bolus into the pharynx, with the posterior tongue lowering to open access into the oropharynx. Food boluses are manipulated by the tongue backward along the palate, whilst the jaw is opening, to allow the bolus to enter the pharynx. It arrives at the valleculae for the pharyngeal stage.

With the pharyngeal stage of swallow, the nasopharynx becomes separated through soft palate elevation- this prevents food regurgitation into the nasopharynx. At the same time, the base of the tongue retracts to manipulate the bolus against the pharyngeal wall. The pharyngeal constrictors contract from superior to inferiorly, allowing the food bolus to travel downwards towards the esophagus. The pharyngeal stage has adaptations to help protect the airway from aspiration- the epiglottis moves to seal close the vestibule, whilst the vocal folds close together to seal the glottis. At this point, the upper oesophageal sphincter opens by suprahyoid and thyrohyoid muscle contraction to allow entry into the esophagus.

At the oesophageal stage of swallow, the bolus is propelled through the entire length of the esophagus by peristalsis. There is an initial relaxation of the muscle around the bolus, followed by muscle contraction that tracks the food bolus down past the lower oesophageal sphincter and into the stomach. Note the lower two-thirds of the esophagus is smooth muscle, with the autonomic nervous system controlling peristalsis.

Initially, the swallow is assessed using the lateral plane. This is to view the passage of the bolus in its entirety into the esophagus. Nasopharyngeal regurgitation, the elevation of the hyoid bone, tilting and sealing by the epiglottis, residual food in either the pyriform sinuses or valleculae, and abnormal upper oesophageal sphincter opening are all standard endpoints for assessment. An additional benefit of the lateral plane is the ability to assess for the entry of test boluses into the airway passages and to determine at what stage this may occur. The anterior-posterior plane is then examined, which provides the added benefit of determining asymmetry if there is pathology present. Videofluoroscopy allows calculation of the Oral Transit Time and Pharyngeal Transit Time, to calculate the Oropharyngeal Swallowing Efficiency. The severity of aspiration (penetration) using the 8-point Penetration-Aspiration Scale (PAS) with 1 meaning the absence of penetration of contrast below the vocal cords.[10]

Poor oral control can be demonstrated in videofluoroscopy by material falling through the lips (e.g. neuropathies), the inability of the subject to form a bolus using their tongue and to subsequently correctly position it in the oral cavity (e.g. stroke), or by a lack of seal formation (posterior tongue not adequately contacting the soft palate) leading to leakage of material and possible laryngeal penetration and aspiration.  Poor tongue coordination, or hesitant initiation of swallowing, can show stasis of material within the oral cavity. Failure of soft palate elevation during swallowing subsequently leads to an insufficient palatopharyngeal seal that causes nasopharyngeal regurgitation.

Critical findings demonstrated during laryngeal elevation include decreased hyoid bone elevation (it normally elevates to appose the angle of the mandible), and reduced epiglottis movement. The latter suggests impaired glottic protection with a significant risk of material entering the supraglottic region and leading to aspiration. Note that if contrast material enters the laryngeal vestibule this is termed laryngeal penetration, whilst contrast entering below the vocal cords is termed aspiration. Material may be seen to remain in the valleculae or piriform sinuses after swallowing- this is observed in cerebrovascular accidents.

Videofluoroscopic swallow study uses x-rays for image study. Due to the use of ionizing radiation, there is a recognized risk of cellular damage and potential cancer induction. The risk becomes higher with greater radiation doses used.

Some individuals may have allergies to the contrast, and it is important to appropriately consent the patient for this. As with other radiological investigations, pregnancy status needs to be determined before commencing the study.

As the patient is being assessed for dysphagia, the radio-opaque test boluses may enter the airway passages- i.e., aspiration. This risk is reduced when the speech and language pathologist/therapist commences the study using a material with the easiest consistency for the patient to swallow before escalating to more difficult consistencies.

Overall, dysphagia increases the morbidity and mortality of patients. Therefore, it is imperative that dysphagia is diagnosed and managed early to maintain the best possible quality of life for the individuals concerned. By making a prompt diagnosis and identifying the cause, healthcare professionals can personalize management to the individual patient.

Speech and language therapists will determine the stage(s) of a swallow that are abnormal and can make suggestions to the clinical team/carers/patient themselves. Management plans can include: advising that the patient becomes ‘Nil by Mouth’ and fed via a tube, e.g., nasogastric tubes or percutaneous endoscopic gastrostomy, requesting the patient avoid food of certain consistencies, e.g., ‘soft diet only’ or using maneuvers when eating.

Healthcare professionals need to keep up to date with the latest guidelines and skillsets required to manage patients presenting with swallowing disorders. The American Board of Swallowing and Swallowing Disorders provides for specialty certification. Speech and language pathologists/therapists have expertise in the assessment, diagnosis, and management of individuals with dysphagia and work inter-professionally with dieticians, radiologists, nurses, doctors, and carers to improve the quality of life and minimize risk.[2] 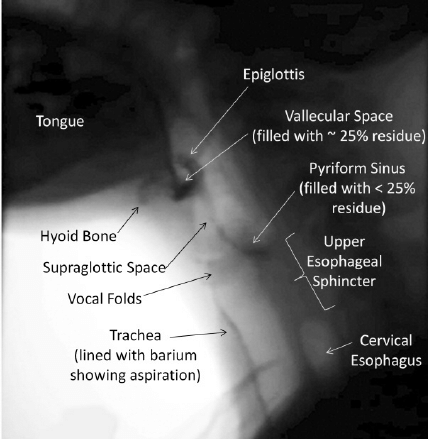 A still x-ray image, taken from a videofluoroscopic swallowing study. This image shows the oropharyngeal anatomy, and includes evidence of mild residue (up to 25% of the available space) in the valleculae and pyriform sinuses. Additionally, evidence of prior aspiration is evident as a thin line of barium running down the front wall of the trachea.
Contributed by Anuj Aggarwal, MD 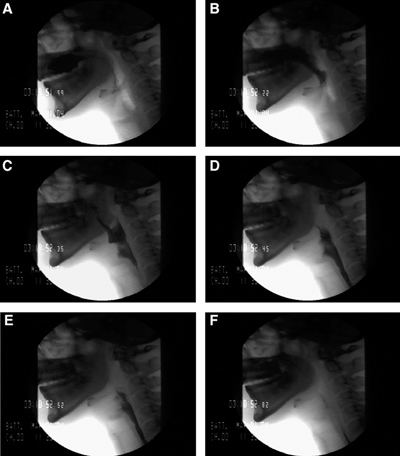