The X chromosome contains 867 identified genes; most of these genes are responsible for the development of tissues like bone, neural, blood, hepatic, renal, retina, ears, ear, cardiac,  skin, and teeth. There are at least 533 disorders due to the involvement of the genes on the X chromosome.[1] A 'trait' or 'disorder' determined by a gene on the X  chromosome demonstrates X-linked inheritance.

In 1961, Mary Lyon proposed that in the cells of mammalian females, one X chromosome out of the two would undergo random inactivation in early embryonic life, and therefore, both males and females have a single active X. Lyon's hypothesis provided an improved understanding of the basic mechanisms responsible for X-linked diseases.[2][3][4][5]

Classically, the descriptions of X-linked inheritance are either  X linked recessive and X linked dominant.

Generally, it manifests only in males. A male with an affected allele on his single X chromosome is hemizygous and can not transmit the disorder to their male offsprings, but all his daughters would be obligate carriers. Healthy heterozygous carrier females pass the disorder to affected sons. So from affected males, it can be transmitted to male grandchildren through carrier daughter ('diagonal' or 'Knight's move' transmission).

X-LINKED DISORDERS IN FEMALES: Sometimes, females might be affected by X linked recessive disorders. This fact is explainable by one of the following possibilities.

(a) Heterozygosity: X inactivation is a random phenomenon that can involve a mutant allele containing X and a normal allele X in equal proportion in the heterozygous female. It is a possibility that the active X chromosome in the majority of the cells of a heterozygous female is the one having a mutant allele (skewed X inactivation), leading to disorder expression; this has been the case in Duchenne muscular dystrophy and hemophilia A.[6][7]

(b) Homozygosity: When both X chromosomes of females have a mutant allele, as reported in hemophilia A and ichthyosis.[8][9]

(c) Translocations: If a female is having a translocation involving an autosome and one of the X chromosomes and the translocation disrupts a gene on an X chromosome, in that case, a female might be affected. This pattern has been observed in Duchenne muscular dystrophy.[10][11][10]

(d) A female having only a single X chromosome (Turner syndrome), which is bearing a mutant allele. Hemophilia has been reported in the girl infant with the turner syndrome.[12]

Some X-like dominant disorders, such as incontinentia pigmenti (Bloch-Sulzberger syndrome), showed a mosaic pattern of involvement for heterozygous females.[15]

X-LINKED DOMINANT LETHALS: These disorders are incompatible with early embryonic survival. They are seen only in females and not in males because, in the severe form, they will cause the death of a male embryo, but as females are less severely affected female embryo will survive.[16]

Many female carriers of X-linked 'recessive' disorders demonstrate abnormal phenotype. This is due to the variable expressivity of X-linked disorders and the involvement of several mechanisms (e.g. skewed X-inactivation, somatic mosaicism...etc). So, recently it has been proposed that the terms' dominant' and recessive' should be discontinued, and all disorders should categorize as X-linked.[17][18][19]

Because of the availability of genetic testing, most of these disorders can now be diagnosed by chorionic villus sampling during early pregnancy. Unfortunately, spontaneous mutations do occur, and the disorder may occur without any family history in some patients.

The following features are necessary to establish the clinical diagnosis.

The following features are necessary to establish the clinical diagnosis. 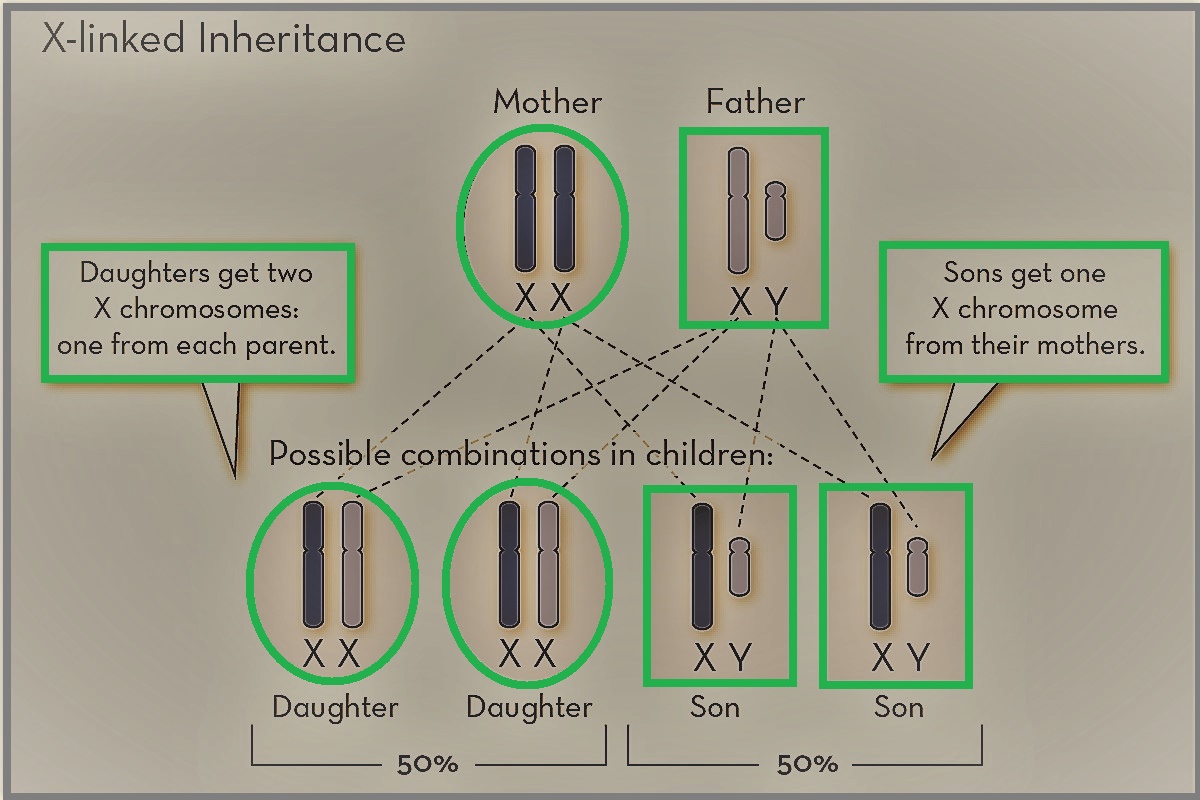 Uchida T,Ogata H,Shirai Z,Mitsudome A, [Duchenne muscular dystrophy (DMD) in a female with an X-autosome translocation]. No to hattatsu = Brain and development. 1988 Jan;     [PubMed PMID: 3279979]