Hemodynamics ultimately begins with the heart which supplies the driving force for all blood flow in the body. Cardiac output propels blood through the arteries and veins as a function of ventricular contraction. Ventricular motion results from the shortening of cardiac myocytes concentrically. This squeezing motion is translated into the cardiac output, which is a function of both heart rate and ejection fraction (the starting volume after diastolic filling minus the final ventricular volume after systole). Hemodynamics represents the governing principles of this blood flow and its behavior in the blood vessels.

When considering physiologic blood flow, it is simplest to think of the blood flowing through pipes or cylinders, and from that basic understanding add in the complexities. Normal blood flow can be thought of as simple laminar flow in most instances (for exceptions, see pathology). A visualization of laminar flow can be seen in the figure below. Laminar flow is characterized by a gradient of flow lines representing different blood velocities at different locations in the tube. The reason for these differences in blood flow velocity is wall stress (a type of shear stress). When a fluid, in this case, blood, flows through a pipe, friction exists between the fluid and the wall of the tube. This friction decreases the velocity of the blood closest to the wall (hence the shorter lines on the diagram closer to the tube wall). Another factor within the realm of laminar flow is the Reynolds number. The Reynolds number is a value for a given fluid to model the conditions at which that fluid will remain in laminar flow. A variable affecting the Re number of a fluid, in this case, blood viscosity. In the case of blood, it is a product of its constituents: cells and protein. The Reynolds number considers the velocity of flow and external factors that might contribute to turbulent flow. [1][2][3]

Turbulence is more likely to develop at a high Re number.

One of the most significant wrinkles in this simplified model is the principle of blood vessel compliance. Compliance is the amount of distention for a given amount of pressure. As such, when blood is pumped from the heart, the blood vessels do not act as complete rigid tubes. They expand and contract with the pressure changes due to their elastic nature.

Compliance can be modeled with the following equation, where C is the compliance, V is volume, and P is pressure:

Essentially, the greater the change in volume for a given pressure change, the greater the compliance. Physiologically, veins have greater compliance than arteries under normal conditions. This is because arteries are thicker and more muscular than veins (less distensible). The result is a high-pressure system within the arteries and a lower resistance (low-pressure system) in the veins.

This governing principle is quantified by Ohm’s law of fluid flow which states the following where flow (Q) is equal to  the pressure gradient (ΔP) divided by resistance (R):

Physiologically, this means that blood flow is equal to the change in pressure divided by systemic resistance. In other words, to increase blood flow, one could either increase the pressure difference (e.g., increased cardiac force) or decrease the systemic vascular resistance (e.g., dilate blood vessels). Blood vessel resistance can be thought of as how difficult it is to pass blood through a given set of vessels. Intuitively, the size and shape of the blood vessel can alter the ease of blood flow. A helpful analogy for blood flow resistance is motor vehicle traffic. The cars represent the ease of blood flowing through a blood vessel. If we made the road narrower or add a toll booth, fewer cars can pass a given point for a set amount of time. This is analogous to making the blood vessel narrower (blood vessel diameter is a factor for resistance) which increases resistance. The total resistance for a continuous blood vessel or group of vessels in series (one after another) is simply represented by the following, where R1 represents a section of a blood vessel with a given resistance:

However, when blood vessels diverge and create multiple paths with a common destination, we say these blood vessels are in parallel and resistance takes on the equation 1/Rtot = 1/R1 + 1/R2 + 1/R3 and so on. Testing this equation with some sample values will result in a total resistance less than the sum of its parts. Here again, the car analogy is helpful. Where adding blood vessels in series increasing the resistance (i.e., adding toll booths one after another on the road), adding blood vessels in parallel becomes analogous to opening multiple lanes. Within the analogy, it is easier to drive when there are several toll booths open (in parallel). A physiologic example of this phenomenon can be observed in capillary beds, where although blood vessels are very small, they are arranged in parallel and offer comparatively low resistance to flow.

One can argue that virtually every cardiovascular pathology augments normal hemodynamics in some form or another. However, some examples very clearly illustrate the physiologic principles explained above. One such example is age-related vascular disease. While researchers still debate the exact mechanism for this disease, the result is a loss of normal endothelial compliance in the blood vessels. This change causes blood vessels to act stiffer and less distensible with the pressures of systole (where the heart pushes the blood into the blood vessels creating pressure). The main result of this seemingly minor change is an increase in blood pressure. By increasing the blood pressure, more load is placed on the heart, predisposing it to further compromise in the form of hypertrophy (i.e., the heart gets thicker in an attempted push against this greater vascular resistance) or direct vascular damage from the increased pressure (e.g., hemorrhagic stroke).[1][2][3]

While age is one common cause of hypertension, several others bear mentioning. Many endogenous substances act as vasoconstrictors and exert their effects to modify blood pressure. Angiotensin (I and II) and aldosterone are such components. Along with renin, these form the primary constituents of the renin-angiotensin-aldosterone system (RAAS). Aberrations in this pathway lead to elevated levels of these substances, especially angiotensin II and aldosterone, in the blood, which raises the blood pressure through increased vascular resistance (i.e., blood vessel constriction). Aldosterone is the end effector of this pathway, and in addition to vasoconstriction, causes reabsorption of sodium in the distal tubule of the kidney, which increases blood volume and blood pressure. This system exists to maintain normal pressure in times of fluid loss or hemorrhage, but pathological alterations are possible. Renal artery stenosis is one such case. Stenosis results in decreased blood flow to the kidney, subsequently increasing renin release. Increased renin leads to a cascade, resulting in elevated aldosterone (and angiotensin II). The vasoconstriction and salt retention that follows result in hypertension, which is resistant to typical modes of treatment.

Stress and anxiety also can contribute to elevated blood pressure. This effect takes place in the form of excess catecholamines (e.g., norepinephrine and epinephrine), which increase cardiac contractility, which increases flow and selectively constricts blood vessels, which increases vascular resistance. Essential hypertension is one example where hypertension seems to exist without any easily identifiable cause. These patients may have a family history of similar early elevations in blood pressure, but ultimately, this is a diagnosis of exclusion after ruling out other causes.

Regardless of the source, hypertension has important consequences for the body. In addition to cardiac remodeling, there are reflex changes to the blood vessels from the greater pressure. The arterioles, which are the smallest arterial blood vessels before the capillary beds, reflexively constrict to protect the relatively delicate capillary beds from these damaging forces. This reflex constriction increases resistance, which spares the capillaries, but also further increases pressure (remembering that P = RQ, so an increase in resistance will increase pressure for a given flow).

The first four classes each illustrate a significant mechanism for increased resistance of a vascular system and an especially dangerous one in this particular pathology. The idiopathic or heritable disease can result in fibrosis or constriction of the blood vessels, but this category is very broad and includes toxins or defects in the body's ability to produce vasodilatory substances. These factors can result in the narrowing of the blood vessels and increased vascular resistance. Left heart failure results in a decrease in the forward blood flow and marked vascular congestion. Intuitively, this increases resistance in a similar way a large blockage in a blood vessel might. Lung disease and hypoxia illustrate an important physiologic point; the pulmonary arterioles are responsive to oxygen (resulting in vasodilation). Without oxygen, there is marked vasoconstriction, which increases vascular resistance and increases pressure (velocity increases to maintain net flow). The thromboembolic disease results in decreased pathways for pulmonary blood flow. As a result, the net resistance of the system increases. Recall that as parallel pathways are created, the net resistance becomes reduced (the emboli act in opposition to this). The increased pressure from the alveolar damage, among other mechanisms, results in significant morbidity and mortality for patients without a reversible cause of this condition.[5]

Cardiac auscultation takes advantage of similar principles as the blood pressure measurement previously described. The foundation of both is the principle that turbulent flow may be auscultated, and laminar flow is essentially silent for our purposes. When auscultating a healthy heart, two beats are heard representing the closure of the mitral and tricuspid valve (S1) and then the aortic and pulmonic valves (S2). Under physiologic conditions, those are the only sounds heard, but pathologic valves or defects in the cardiac muscle can create extra noises. These noises are a result of the blood flow being disturbed, and as already mentioned while discussing blood pressure measurement, this can result in an audible rush of turbulent flow. Auscultated turbulent flow in cardiac examination represents murmurs and can help diagnose cardiac pathology.

Cardiovascular pharmacology is a massive topic, but a few principles are helpful when beginning to understand hemodynamics in a clinical context. One case is clinical blood pressure management. When treating blood pressure that is not related to an underlying condition (such as renal artery occlusion or pheochromocytoma), the primary goal is to decrease blood pressure to less than 130/80 in most of the population. These goals are achievable through medications that augment the variables previously discussed, namely systemic vascular resistance and cardiac contractility. While it is possible for certain drugs such as beta-blockers and non-dihydropyridine calcium channel blockers (verapamil and diltiazem) to decrease cardiac contractility, the majority of blood pressure medications target systemic vascular resistance. By decreasing systemic vascular resistance for a given cardiac output, the pressure decreases [remembering Q = ΔP/R, for flow (Q) to remain constant as resistance (R )goes down so must the pressure gradient (ΔP)]. Drugs such as ACE inhibitors and dihydropyridine calcium channel blockers (e.g., amlodipine) ultimately result in vasodilation and decreased systemic vascular resistance. Vasodilation also can be induced by nitrates to reduce cardiac preload in the case of angina.

Systemic vascular resistance also can be reversed by agents collectively referred to as vasopressors. This constricting of the blood vessels and the subsequent increase in resistance is valuable when the blood pressure drops to dangerous levels. A clinical example of this phenomenon may present in anaphylactic shock, where vasodilation decreases blood pressure to dangerous levels. Epinephrine can reverse this effect by increasing systemic vascular resistance. 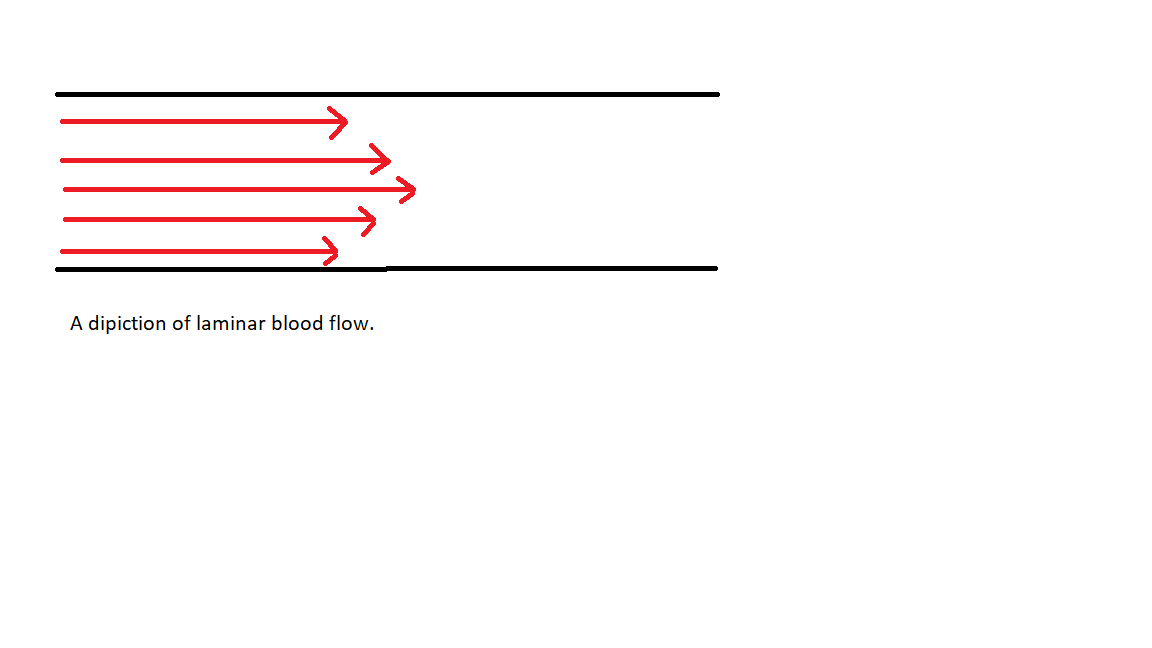 Shim CY,Hong GR,Ha JW, Ventricular Stiffness and Ventricular-Arterial Coupling in Heart Failure: What Is It, How to Assess, and Why? Heart failure clinics. 2019 Apr;     [PubMed PMID: 30832817]