Gluconeogenesis refers to a group of metabolic reactions in cytosol and mitochondria to maintain the blood glucose level constant throughout the fasting state. Reactions in the gluconeogenesis pathway are regulated locally and globally (by insulin, glucagon, and cortisol), and some of them are highly exergonic and irreversible.[1] The balance between stimulatory and inhibitory hormones regulates the rate of gluconeogenesis. The liver and, secondarily, the kidney are the organs that supply circulating blood glucose to various tissues. Different tissues have multiple mechanisms to generate glucose during fasting, maintaining adequate energy levels for their proper function.[2]

Several tissues require continuous glucose supply, including the brain, erythrocytes, renal medulla, the lens and cornea, testes, and skeletal muscles during exercise. The brain uses glucose exclusively in both the fed and fasting states except for prolonged fasting, which uses ketones. Notably, the daily amount of glucose used by the brain accounts for 70% of the total glucose produced by the liver in a normal fasting person.[3]

Initially, during the first hours of fasting, hepatic glycogenolysis is the primary source of glucose. Glucose stored as glycogen can cover the energy needs roughly for one day; the amount of glucose supplied by glycogen reserves is 190 g, while the daily requirements for glucose are 160 g. After several hours of starvation, gluconeogenesis and glycogenolysis contribute equally to blood glucose. The amount of glucose supplied by glycogen decreases rapidly while the increase in the glucose fraction contributed by gluconeogenesis results in keeping constant the total amount of glucose produced. Estimates are that 54% of glucose comes from gluconeogenesis after 14 hours of starvation, and this contribution rises to 64% after 22 hours and up to 84% after 42 hours.[4] However, when glycogen stores deplete, the body uses lactate, glycerol, glucogenic amino acids, and odd chain fatty acids as glucose sources. In prolonged fasting, kidney participation in gluconeogenesis increases and is responsible for about 40% of total gluconeogenesis.[5]

Alanine, produced in skeletal muscles by protein catabolism and subsequent transamination reactions, is shuttled out in blood and taken up by the liver. Inside hepatocytes, alanine undergoes transamination into pyruvate, used for gluconeogenesis. Glucose produced in the liver is shuttled out in circulation and taken up by muscle cells for use in ATP production (Cahill cycle). Other gluconeogenic amino acids (e.g., methionine, histidine, valine) and gluconeogenic and ketogenic (e.g., phenylalanine, isoleucine, threonine, tryptophane) become transaminated into different intermediates of the gluconeogenic pathway.[6]

In red blood cells and other tissues (lens) that lack mitochondria and the exercising muscle tissue that favors anaerobic metabolism, glucose is converted to pyruvate and subsequently to lactate. Lactate is secreted into plasma and picked up by the liver for conversion into glucose (Cori cycle) via a redox reaction catalyzed by lactate dehydrogenase.[7]

Fatty acids are stored as triglycerides and mobilized by the hormone-sensitive lipase (HSL); glycerol from the triglyceride structure is released in blood to be taken up by the liver, phosphorylated by glycerol kinase, and oxidized into dihydroxyacetone phosphate -an intermediate of gluconeogenesis/ glycolysis pathway- by glycerol phosphate dehydrogenase. In contrast to the ketogenic even-chain fatty acids, Odd-chain fatty acids are converted into propionyl CoA during beta-oxidation. After several steps, propionyl CoA is converted into methylmalonyl CoA. Methylmalonyl CoA mutase/B12 catalyzes the conversion of the latter into succinyl-CoA. Succinyl-CoA is an intermediate of the TCA cycle that is eventually converted into oxaloacetic acid and enters the gluconeogenesis pathway. Even-chain fatty acids and purely ketogenic amino acids (leucine, lysine) converted to acetyl-CoA cannot enter gluconeogenesis because the step is catalyzed by pyruvate dehydrogenase (PDH) is irreversible.[8]

In certain conditions, such as ischemic strokes and brain tumor development, astrocytes have increased activity of gluconeogenic enzymes, and they use lactate, alanine, aspartate, and glutamate as substrates.[9]

Multiple factors contribute to the regulation of substrates, enzymes, and reactions involved in gluconeogenesis, including:

For gluconeogenesis to occur, the ADP/ATP ratio must be very low since gluconeogenesis is an energy-demanding process requiring high energy molecules to be spent in several steps.[13][14] In between meals, during early fasting, when cells have generated sufficient ATP levels via the TCA cycle, the increased ATP levels inhibit several highly regulated TCA cycle enzymes (citrate synthase, isocitrate dehydrogenase, a-ketoglutarate dehydrogenase). Acetyl-CoA is the indicator of the cells' metabolic activity and functions as a gluconeogenesis regulator at a local level. Acetyl-CoA levels back up and allosterically activate pyruvate carboxylase. This prevents the simultaneous occurrence of gluconeogenesis and the TCA cycle in the cells.[15]

Glycogen storage disease type 1 is a group of inherited complex metabolic disorders which share poor fasting tolerance.[23] In Von Gierke disease, liver cells lack glucose-6 phosphatase, the enzyme required to release glucose from liver cells. This disease affects both glycogenolysis and gluconeogenesis since the missing enzyme is common in both pathways resulting in the accumulation of glucose-6 phosphate in liver cells. Symptoms include:

Pyruvate carboxylase deficiency is due to the lack of pyruvate carboxylase or altered enzyme activity. It causes lactic acidosis, hyperammonemia, and hypoglycemia. Hyperammonemia is due to pyruvate not being converted into oxaloacetic acid. Oxaloacetic acid gets transaminated into aspartate; reducing aspartate levels results in the reduced introduction of ammonia into the urea cycle.[27] 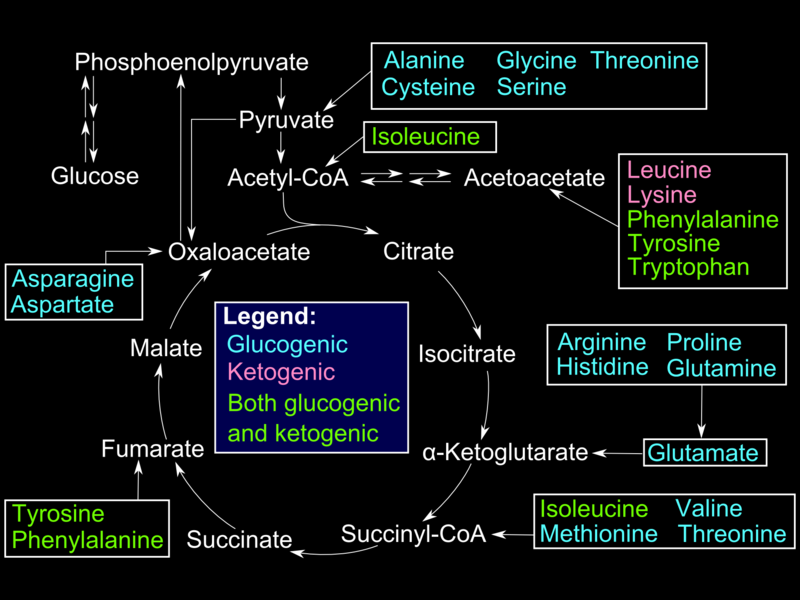 Hers HG, The control of glycolysis and gluconeogenesis by protein phosphorylation. Philosophical transactions of the Royal Society of London. Series B, Biological sciences. 1983 Jul 5;     [PubMed PMID: 6137004]