A vessel is considered to be aneurysmal when it enlarges to about one and a half to two times the size of the normal vessel. True femoral artery aneurysms are rare and include dilation of all the layers of the vessel wall. In contrast, femoral artery pseudoaneurysms are more commonly encountered in clinical practice, often after iatrogenic trauma from diagnostic or interventional arterial procedures. Pseudoaneurysms, also known as false aneurysms, do not involve all layers of the vessel wall. Patients with aortic or other peripheral aneurysms can have synchronous or metachronous femoral artery aneurysms. As with any peripheral or a visceral aneurysm, the main risks associated with femoral artery aneurysms include thrombosis/occlusion, distal embolization, and rupture. This clinical entity is rare; therefore, the natural history is not well defined.[1][2][3]

In asymptomatic patients, these aneurysms may be detected by patients or on physical examination as a groin bulge or mass. Because of this presentation, it can be easily confused with a hernia. However, on physical examination, strong pulsation of this mass should raise the suspicion for a femoral artery aneurysm. A complete lower extremity vascular examination should be performed to ensure that there is no sign of distal embolization. In addition, the extremity should be inspected for swelling as large aneurysms can compress venous return from the lower extremity and cause lower extremity venous congestion/edema or even deep venous thrombosis. Patients may experience pain from pressure on surrounding structures or nerves. Patients should be asked about a preceding history of trauma to the groin. Physical examination should include a search for aneurysms at other body sites. As any arterial aneurysm can be mycotic, patients should be asked about symptoms of systemic infection and examined for signs of systemic infection (such as endocarditis).

Work up for a femoral artery aneurysm can include an ultrasound, computed tomography angiography, or magnetic resonance angiography. Depending on the acuity of the situation, CT angiography is often the first investigation employed as it provides excellent anatomic information for possible intervention.[4][5][6]

In general, there are no absolute contraindications to the procedure. The procedure may be attempted under regional or local anesthesia if the patient is an exceptionally high surgical risk due to extensive medical comorbidities such as severe cardiopulmonary disease.

The following equipment is needed for this procedure:

The following personnel is required for this procedure: surgeon (usually a vascular surgeon), first assistant (resident, fellow, physician assistant, medical student), nursing staff (circulator nurse, scrub tech) and anesthesiologist. A radiology technician may be needed if occlusion balloon is needed during the procedure to control bleeding.

Informed consent should be obtained from the patient for the operative repair. Preoperative pedal pulse examination should be performed and documented as a baseline for comparison. The abdomen and bilateral groins should be prepped and draped, ensuring all sterile precautions. The procedure is usually performed under general endotracheal anesthesia because the dissection can be extensive.

Femoral artery aneurysm is generally repaired using the open surgical technique. Endovascular placement of stent-grafts across the inguinal ligament is currently not considered the standard of care. It has been described in the management of femoral pseudoaneurysms in hemodynamically unstable patients. Some authors have also described a hybrid approach to the repair of femoral artery aneurysms whereby endografts were used with limited open dissection.

In a patient with multiple other aneurysms (such as aortic or popliteal), the symptomatic aneurysm should be addressed first. If multiple coexisting aneurysms are all asymptomatic, they should be addressed in s staged manner. Ultrasound can be helpful in planning the extent of the surgical incision. Also, if there is a preoperative CT scan or MRI, they can guide the surgeon in this regard as well. We usually perform a vertical incision in the groin for repairing femoral artery aneurysms instead of a transverse incision. An aneurysm may involve the proximal portions of the profunda and superficial femoral arteries. A vertical or longitudinal incision provides better exposure in case one encounters such a scenario. Once normal proximal and distal arterial segments are dissected out, the patient is systemically heparinized. Once the heparin has circulated for an adequate amount of time, vascular clamps are placed proximally and distally. An aneurysmectomy is performed, followed by the placement of an end-to-end interposition graft. If the proximal portions of the profunda and superficial femoral arteries are involved, a graft with a Y configuration may be used. Other configurations, depending on the aneurysm anatomy, maybe fashioned with combined use of a bovine pericardial patch or venous patch or re-implantation of superficial femoral or deep femoral artery as needed. Completion angiography can be performed if the patient had any preoperative evidence of distal embolization.

Currently, open surgical repair of femoral artery aneurysms is the gold standard for therapy. Evolving endovascular techniques may provide durable minimally invasive means for repairing such aneurysms in the future.

The management of a femoral artery aneurysm is by an interprofessional team that includes an interventional cardiologist, radiologist, or a vascular surgeon. Today, minimally invasive procedures are used to close pseudoaneurysms of the femoral artery. but if the patient has atherosclerotic disease, then an open procedure with patch repair may be useful. It is important to communicate with the team on the type of closure planned. Recurrences are rare but may include loss of pulses, hematoma, and infection.

Knowledgable operative nurses are essential for this procedure. Perianasthesia and critical nurses monitor patients, administer medications, and communicate with the interprofessional team with issues and updates. 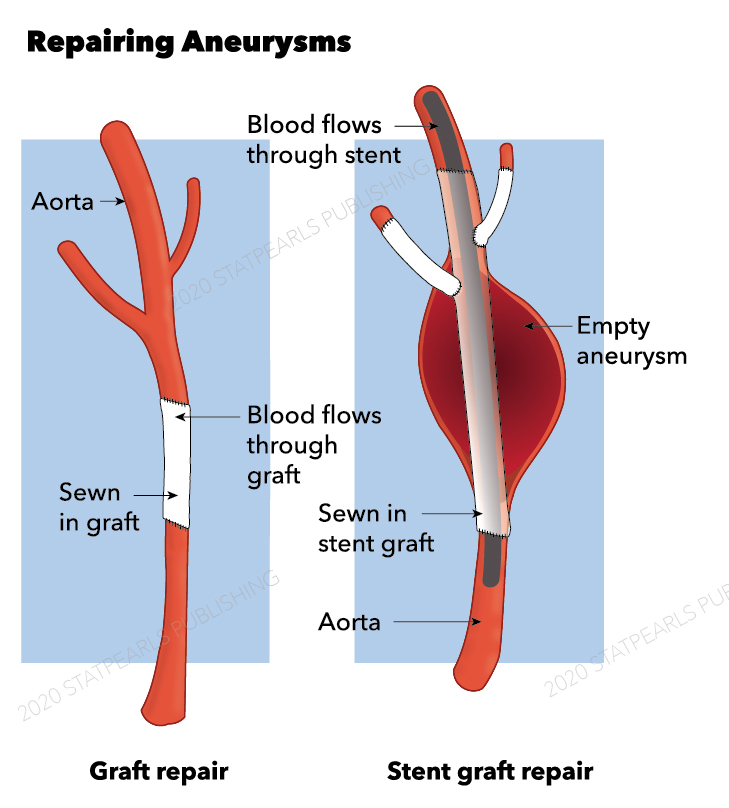