Rat-bite fever, also known as streptobacillosis, spirillary fever, bogger, and epidemic arthritic erythema, is a zoonotic illness that manifests with acute relapsing fever with migratory polyarthralgia. It is transmitted from rodents to humans either via rodent urine or mucosal secretions. It is a rare disease and can be caused by two kinds of bacteria: Spirillum minus and Streptobacillus moniliformis. Both organisms are normal oral flora in rodents. Most cases occur in Japan, but it has also been seen in the United States, Europe, Australia, and Africa and is usually transmitted by a rat bite. However, some cases are associated with mere exposure to the urine or nasal, fecal, or ocular secretions of an infected rodent. Rat-bite fever can also be transmitted through food or water that has been contaminated with feces or urine, or via household pets such as dogs or cats that have been exposed to rodents. Untreated cases of rat-bite fever can have a mortality rate as high as 10 percent. This activity reviews the evaluation and management of patients with rat-bite fever and highlights the role of interprofessional team members in collaborating to provide well-coordinated care and enhance outcomes for affected patients.

Rat-bite fever, also known as streptobacillosis, spirillary fever, bogger, and epidemic arthritic erythema, is a zoonotic illness, which is manifested by acute relapsing fever with migratory polyarthralgia. It is transmitted from rodents to humans either by rodent urine or from mucosal secretions. It is a rare disease and can be caused by two kinds of bacteria namely  Spirillum minus and Streptobacillus moniliformis. Both organisms are found as normal oral flora in rodents.[1] Most cases occur in Japan, but it has also been seen in the United States, Europe, Australia, and Africa. It is usually transmitted by a rat bite. Some cases are diagnosed after exposure to the urine or other bodily secretions of an infected rodent. These secretions can be from the mouth, nose, or eyes. It can also be transmitted through food or water, that has been contaminated with feces or urine. Household pets such as dogs or cats exposed to rodents can carry the disease and subsequently infect humans. If a rodent bites a person, the area should thoroughly wash and cleansed quickly to reduce the risk of the infection.[2][3][4] . Untreated cases can have a mortality rate of up to 10% [5].  The infection is usually treated with Penicillin or Tetracyclines.

Two types of bacteria can cause rat-bite fever and cause two separate types of illness.[6][7]

Rat-bite fever transmitted by the gram-negative coiled rod (Spirillum minus) is very rare and is found in Asia. It is also called Sodoku.

Streptobacillosis is a more common form of rat-bite fever, and it is also known as epidemic arthritic erythema. It is caused by Streptobacillus moniliformis and is transmitted by rat bite or ingestion of contaminated products usually milk (Haverhill fever).

Annually, more than two million animal bites occur in the United States, and rats are responsible for approximately 1%. The typical victim of rat bite fever is a child younger than five years old living in poverty. Pet store workers and laboratory technicians working with rats are also at risk. The risk of infection after a rat bite is about 10% [8][9][5]

Because of the relatively low incidence and low mortality rate, little information describing the pathogenesis of S. moniliformis exists. The organism is capable of producing morphological findings not associated with bacterial infections. An autopsy of rat bite fever victims demonstrates erythrophagocytosis, hepatosplenomegaly, interstitial pneumonia, lymph node sinus hyperplasia, endocarditis, and myocarditis along with degenerative changes in the kidneys and liver. Radiological data suggest that rat-bite fever might cause damage to physes and acrophyses of bones, similar to frostbite induced damage. Biopsy of skin lesions in rat bite fever has demonstrated leukocytoclastic vasculitis.

When there is suspicion of rat bite fever and if the cultures are negative, the bite site can be biopsied to isolate the organism. Streptobacillus moniliformis is a filamentous, highly pleomorphic, non-motile gram-negative organism. Under the microscope, it may appear straight but may have some irregular lateral bulbar swellings. The bacteria may be found in aggregates or chains. The colonies appear as "cotton ball" in culture media [10]

In case of Spirillum minus, the organism is a thick, short, tightly coiled rod and it is gram stain negative.[5]

The disease is best described based on the type of the infecting organism:

In the case of  Streptobacillus , the incubation period varies from 3 to 20 days, but in most cases, it's less than a week. The symptoms do not manifest for two to four weeks after exposure. The symptoms include fever, migratory polyarthritis, and rigors. The fever lasts longer and is recurring, often for months. The fever may wax and wane. The joints can become painfully swollen and back pain can also develop.  As the infection progresses, the individual will develop migratory polyarthralgia and myalgia. Both the large and small joints may be involved, but most patients experience inflammation in the knee and ankle joints at some point during the illness. In some patients, the migratory polyarthralgia may last several years.  On physical examination; the site of the bite will appear to be healed with mild or no signs of inflammation. Localized lymph node enlargement is rare. If the site of the bite continues to show persistent inflammation and tenderness, another diagnosis should be suspected. [5] About three-quarters of patients will develop a petechial or maculopapular rash and there may be hemorrhagic vesicles on the extremities, which are tender to palpation.[11]

In the case of Spirillosis, the incubation period is two to ten days. The bite site is indurated and may ulcerate and have lymphadenopathy unlike the case of Streptobacillus, where the lesions have mild inflammation and lymphadenopathy is rare.  Around 50 % of patients may have a red-brown colored violaceous, macular rash and rarely plaques [12]

Haverhill fever presents with similar symptoms like rat bite fever with the exception of lack of history of rat bite or contact with rats. Such individuals are more prone to have headaches, dizziness, and vomiting.

A high clinical suspicion is needed for diagnosing this entity. Streptobacillus moniliformis can be identified by culture. However, it is very difficult to be cultured. The specimen has to be inoculated in culture media that is devoid of Sodium Polyanethol Sulphonate which is an anticoagulant used in culture media because it inhibits the growth of the organism. Anaerobic culture bottles are suitable for the test since they do not contain Sodium Polyanethol Sulphonate.[13]

Spirillosis cannot be cultured, and it can be only identified using dark ground microscopy or Giemsa staining techniques.

Avoid rodents, wash hands and face after contact and any scratches should be cleaned, and antiseptics applied. The effect of prophylactic chemoprophylaxis following rodent bites or scratches is unknown. Animal handlers, laboratory workers, sanitation, and sewer workers must take precautions against exposure. Wild rodents, dead or alive, should not be touched.[14]

Typically Intravenous Penicillin G at a dose of  200,000 units every 4 hours or Ceftriaxone 1 gram intravenously daily should be administered. Once the patient improves clinically, the Intravenous medications can be transitioned to either Penicillin V 500 Mg four times a day or Ampicillin 500 mg four times a day or Amoxicillin 500 mg three times a day. The total duration of antibiotics is 2 weeks. In Penicillin allergic patients, Doxycycline 100 mg twice a day either intravenously or orally can be substituted.

If the disease is untreated, the mortality rate is around 10%

People who interact with animals especially rats must be made aware of this entity. Proper precautions can prevent the spread of this disease. In the event of a rat bite, they should seek medical attention at the earliest.

With proper treatment for rat-bite fever, the prognosis is good. Without treatment, the infection may resolve on its own, although it may take up to a year to do so. If untreated, streptobacillary rat-bite fever can result in Endocarditis, spread to spinal cord, brain, and lungs. Endocarditis carries the highest mortality as it is often mistaken for rheumatic valvular heart disease, resulting in a delay with appropriate antibiotics.

It is believed that rat bite fever is underdiagnosed and under-treated, chiefly because of the failure to consider the infection in the differential diagnosis. Untreated, the infection carries a mortality of more than 10%, and hence, health care providers should be aware of this illness to diagnose it and treat it earlier. People who are exposed to rodents must be cautioned about this illness and to take preventive measures from being bitten by them. 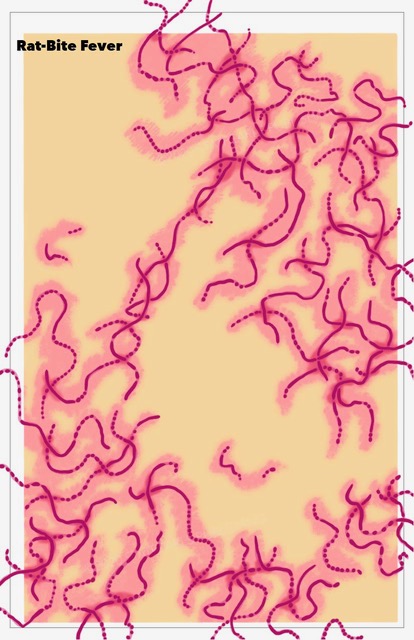 Fukushima K,Yanagisawa N,Imaoka K,Kimura M,Imamura A, Rat-bite fever due to Streptobacillus notomytis isolated from a human specimen. Journal of infection and chemotherapy : official journal of the Japan Society of Chemotherapy. 2018 Apr     [PubMed PMID: 29191371]