Abdominal aortic aneurysm rupture represents a catastrophic emergency and if not recognized and appropriately treated, carries significant morbidity and mortality, with untreated mortality approaching 100%. Most of them rupture into the retroperitoneal cavity, causing symptoms like pain, lightheadedness and a pulsating mass in the abdomen. This activity describes the etiology, clinical features, evaluation and management of patients with ruptured abdominal aortic aneurysms. Optimal outcomes rely on the coordinated effort of an interprofessional team that provides critical care, medical and surgical management along with swift resuscitation of patients with ruptured abdominal aortic aneurysms.

Abdominal aortic aneurysms are commonly found in men aged 65-85 years. These aneurysms are usually asymptomatic until they rupture which is a catastrophic complication. There are several causes of aneurysm dilatation such as direct trauma, chronic infections, acute infections, inflammatory. Atherosclerotic aortic wall damage has been considered major risk factor associated with abdominal aortic aneurysm. This conventional view in recent times has been challenged.[4]

Abdominal aortic aneurysms rupture when the mechanical stress on the aortic wall exceeds the tensile strength of the wall tissue. Although it was originally believed that a simplified Law of Laplace could predict wall stress, experimental evidence has demonstrated that wall stress is more complicated to predict, as it is influenced by aneurysm position, architecture, and the presence of intraluminal thrombus.

The size and rate of expansion of the abdominal aortic aneurysm are the most important factors to forecast rupture. According to the general consensus patients with larger aneurysms should undergo surgery. The clinical approach for smaller aneurysms is controversial. There a few clinical studies in the management of smaller aneurysms size ranging from 4.0 cm to 5.5 cm. The conclusions have shown similar survival rates in patients with the early intervention compared to intervening when the aneurysm reaches greater than or equal to 5.5 cm in size. US veterans administration study has shown lower operative complication when intervened early.

Prevalence of abdominal aortic aneurysm has been decreasing over time, falling from about 4% to 8% prevalence in men older than age 65 to just over 2% prevalence in the same cohort in recent studies. This drop in prevalence has likely been due to decreased rates of tobacco use and implementation of healthier lifestyle choices. The majority of patients identified as having AAA have small aneurysms of less than 5.5 cm.  Because the 1-year incidence of rupture significantly increases to 9.4% for aneurysms of 5.5 cm to 5.9 cm, this is the usual threshold where risks of operative repair fall below risks of rupture. Furthermore, an aneurysm that has increased by greater than 0.5 cm is at increased risk of rupture and should prompt repair.[5][6]

During the period between 2005 through 2012, the incidence of rupture was demonstrated to fall in both England and the United States, likely as a result of increased surveillance and intervention before rupture. The incidence of rupture in the United States was 7.29 per 100,000 population. However, it has been estimated that 4% to 5% of cases of sudden death are secondary to rAAA. Only about 50% of individuals with rAAA reach the hospital, and operative mortality in the setting of rupture is about 50%; however, it is difficult to know precise figures.

The development of an aneurysm is a complex interaction of biomechanical factors such as intraluminal pressure and wall sheer on atherosclerotic walls and biochemical and proteolytic influences resulting in changes in the cellular composition of the aortic wall. Aortic aneurysm rupture ultimately occurs when the force per unit area within the vessel exceeds the tensile wall strength. Although aneurysm diameter is a predominant predisposing factor in the likelihood of aneurysm rupture, aneurysm shape and geometry, the presence of intraluminal thrombus, aortic wall thickness, the presence of wall calcification, and the degree of wall inflammation also influences rupture risk.

A number of features have been identified on microscopic examination of aneurysm walls. There is noted to be fragmentation of the internal elastic membrane, with decreased elastin and increased collagen. In addition, there is noted to be a loss of muscle cells in the medial wall layer. Inflammatory findings associated with aneurysms include increased microvascular infiltration within the wall as well a predominance of T-cell inflammation present within the media and adventitial layers.

Several predisposing factors have been identified as increasing the likelihood of aneurysm formation. These include older age, male gender, systolic and diastolic hypertension, history of current or past cigarette smoking, and first-degree relatives with a history of AAA. After age 50 in men and age 60 in females, the risk of an aneurysm increases with each subsequent decade. Males are four times as likely as females to have aneurysms, and having a first-degree relative with AAA increases risk four times. Smoking is the most important amendable risk factor, influencing both the likelihood of developing an aneurysm and rate of growth acceleration.

Although ideally individuals would have been identified and managed before developing complications like rupture, more than half of patients presenting with rAAA have previously undiagnosed aneurysms and as many as 30% of patients with rAAA are initially misdiagnosed. It is reported that 25% to 50% of patients with the rAAA present with the classic triad of hypotension, flank/back pain, and pulsatile mass. Possible presentations of rupture can include hypotension of unknown etiology, groin pain, and sometimes lower extremity pain. Other possible complications of AAA are hematuria or gastrointestinal hemorrhage. Therefore, physicians should have a high index of suspicion and a low threshold for evaluation in this disease, which has a wide variety of presentations.

On presentation, the degree shock varies depending on the location, size and the delay in presentation. Rupture from the anterolateral wall communicates directly with the peritoneal cavity, so most often is associated with death at the scene. Posterolateral wall rupture communicates with retroperitoneal space so usually patient presents alive. The small-sized rupture causes less blood loss compared to bigger sized rupture also small size might initially seal the rupture limiting the blood loss.

The sensitivity of physical examination to detect a pulsatile mass has been reported between 51% to 100%. Studies have shown that the pooled sensitivity for aneurysm detection increases with increasing size with sensitivities of 29% for aneurysms of 3.0 cm to 3.9 cm, 50% for aneurysms of 4.0 cm to 4.9 cm, and 76% for greater than 5.0 cm. Obesity has been demonstrated to reduce the accuracy of detection. Grey-Turner's sign, ecchymosis involving the flank from dissection of blood along the retroperitoneum is rarely seen, however firmness of the lateral abdominal wall may be detected in some cases.

As outlined in the treatment/management section below, a number of measures should be taken while the patient undergoes evaluation for rAAA. In hemodynamically unstable patients, the patient can be taken to the operating room based on symptoms alone (hypotension, flank/back pain, and pulsatile abdominal mass) or with confirmation of diagnosis with a bedside ultrasound. Although no studies have specifically addressed the diagnostic characteristics of bedside ultrasound in rAAA, the systematic review of the literature revealed sensitivities of 98% to 100% and specificities of 94% to 100%. These results are similar to screening ultrasound performed in radiology suites, which have reported sensitivities of 94% to 100% and specificities of 98% to 100%. In the hemodynamically stable patient, the diagnostic study of choice to identify rAAA is a CT with intravenous (IV) contrast, as it affords the ability to identify the proximity/involvement of the renal arteries as well as aneurysm morphology.[7][8][9]

In patients showing up to an emergency department with suspected rAAA, timeliness of evaluation and disposition are of utmost importance. Initial measures should include initiation of two large bore peripheral IV catheters, continuous hemodynamic monitoring, and lab tests to assess baseline hemoglobin, renal function, and current coagulation status. The patient should be cross-matched for infusion of packed red blood cells, as well as fresh frozen plasma and platelets in anticipation of the potential need for massive transfusion. Early consultation with a vascular surgeon in cases of suspected rAAA, while proceeding with the diagnostic workup, can help to facilitate eventual disposition to the operating room.

Experimental animal models and nonrandomized, retrospective studies suggest that preoperative fluid resuscitation strategies that include permissive hypotension with systolic blood pressures of 80-100 mmHg may improve outcomes. However, there are no randomized controlled trials in the literature to confirm these findings. Blood resuscitation of patients with rAAA is frequently required, often with the need for massive transfusion. Studies have demonstrated that patients with autologous blood transfusion and patients with higher concentrations of FFP transfusion (PRBC:FFP ˜ 1:1) have improved outcomes.

If left untreated, rAAA is almost uniformly fatal within several hours to a week. Decisions to perform open repair versus endovascular repair are complex and have to incorporate patient factors such as age, patient co-morbidities, and patient hemodynamic status; aneurysm factors such as location, size, and shape; surgeon experience; and available resources. Although non-randomized studies have demonstrated improved morbidity and mortality with endovascular repair, when these studies have been controlled for patients' hemodynamic status, these benefits have not been demonstrated.  Furthermore, a meta-analysis of RCTs comparing open versus endovascular repair have demonstrated lack of superiority of one method of repair over the other.

Healthcare workers including nurse practitioners who work in the emergency department should be aware that a ruptured AAA can present in many ways. The most obvious presentation is hypotension with a pulsatile abdominal mass. It is important to consult immediately with a vascular surgeon when there is a suspicion of a rAAA. Sending a such a patient to the radiology suite without monitoring can lead to legal liability.[10] 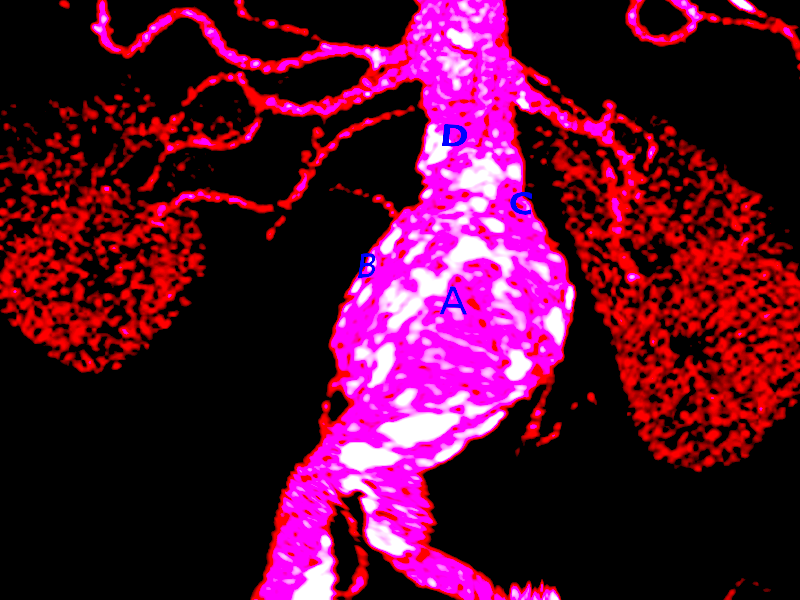 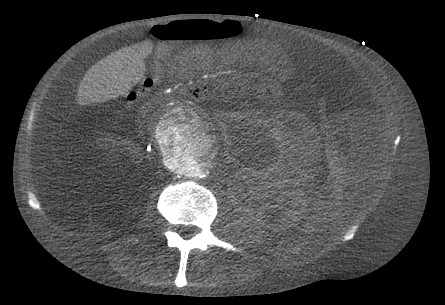