The structure and function of the middle cranial fossa center around the foramina that transmit a variety of cranial nerves and vessels. In the anterior midline of the middle fossa within the sphenoid bone, the optic foramina open into the optic canals which ultimately terminate into the orbital cavities. Of clinical and surgical importance, the prechiasmatic sulcus is a depressed groove between the optic foramina and plays a role in skull base surgery due to its predisposition to hiding cranial base meningiomas. Due to this reason, extensive research has been conducted to establish the anatomic and radiological morphology of the sulcus.[4]

Within the medial aspect of the middle cranial fossa, from medial to lateral, there are four foramina: the superior orbital fissure, pterygoid canal, foramen rotundum, foramen ovale, and foramen spinosum. These foramina are in the sphenoid bone. The lateral portions of the middle cranial fossa form by the temporal bones and are defined by three important foramina: the carotid canal, hiatus of the greater petrosal nerve, and the hiatus of the lesser petrosal nerve. At the intersection of the sphenoid, temporal, and occipital bones, there is a foramen pierced by small vessels called the foramen lacerum.[7]

The middle meningeal artery is a tributary of the maxillary artery and supplies the supratentorial dura mater along with the periosteum of the inner table of the cranial bones. This artery enters the middle cranial fossa through the foramen spinosum before taking a superficial course along the dura. The vessel superficially courses along the temporal bone, implicating it as a source of rapid arterial (epidural) bleeding in the setting of a traumatic temporal bone injury.[10]

The oculomotor nerve, CN III, is purely a motor nerve that triggers movements of the superior rectus, medial rectus, inferior rectus, inferior oblique, and levator palpebrae muscles. It also controls visceral efferent fibers, such as the sphincter pupillae and ciliary muscles.[12] The cavernous section of the oculomotor nerve is attached to the lateral wall of the cavernous sinus between the two dural “leaves” of the lateral sinus wall.[2] This anatomy is similar to the fourth, ophthalmic (V1), and maxillary (V2) cranial nerves, but they are different from the sixth cranial nerve, which will be discussed in a later section. The third and fourth cranial nerves travel in close proximity as they traverse the roof of the cavernous sinus en route to the superior orbital fissure. CN III runs superior to the internal carotid artery within the cavernous sinus and predisposes the nerve to compression by large cavernous internal carotid artery aneurysms; however, compression of CN VI is more common. [2] As the nerve exits the cavernous sinus, the fissural segment of the nerve begins as the nerve enters the medial superior orbital fissure. Approximately 2 to 3 mm before it enters the superior orbital fissure, it splits into superior and inferior divisions as the branches progress to their target muscles.[13][12]

The trochlear nerve, CN IV, is a motor nerve that triggers the movement of one extraocular muscle, the superior oblique. Anatomically, the nerve enters the cavernous sinus along the lateral sinus wall slightly inferior to the oculomotor nerve and superior to the ophthalmic division of the trigeminal and then passes through the superior orbital fissure to enter the orbit.[13]

A variety of conditions affect the middle cranial fossa and an understanding of this area of the skull base is paramount for any clinician or surgeon encountering these conditions. A non-exhaustive list of conditions affecting the middle cranial fossa includes pituitary adenomas, vestibular schwannomas, cavernous sinus thrombosis, cavernous sinus infection, cranial nerve palsies, and intracranial meningiomas. The surgical approach is highly dependent on the location of the pathology addressed. Vestibular schwannomas involve the posterior cranial fossa; however, often a CN VIII sparing middle cranial fossa approach will be used to preserve hearing. In the case of a tuberculum sellae meningioma, surgical approaches ranged from bilateral subfrontal to endoscopic endonasal approaches with the course of surgery depending on the location, size, and surgeon’s preference. Recent literature has suggested that in the case of skull base meningiomas, combination surgical excision and stereotactic radiosurgery was acceptable management.[17][18]

It is impossible to overstate the clinical significance of the middle cranial fossa due to its contents and the numerous pathologies associated with these structures. In this section, some of the most common pathologies will get brief coverage. Cavernous sinus syndrome is characterized by ophthalmoplegia and cranial sensory deficits due to the involvement of multiple cranial nerves in the cavernous sinus. The pathologies that can cause cavernous sinus syndrome vary widely, but can include malignancy, infectious, inflammatory, granulomatous, or vascular etiologies. Regarding malignancy, head and neck tumors are the most likely to metastasize to the cavernous sinus. However, breast, lung, and prostate cancers have also been reported to metastasize to this area.[19]

Since the pituitary gland lies within the middle cranial fossa, many endocrine pathologies have associations with the middle cranial fossa. In the case of a pituitary microadenoma, excess hormone production is common, causing systemic symptoms associated with hormone hypersecretion. In the case of a pituitary macroadenoma, a majority of the symptoms have correlations with compression of nearby structures such as the optic chiasm, leading to bitemporal hemianopsia.[20] 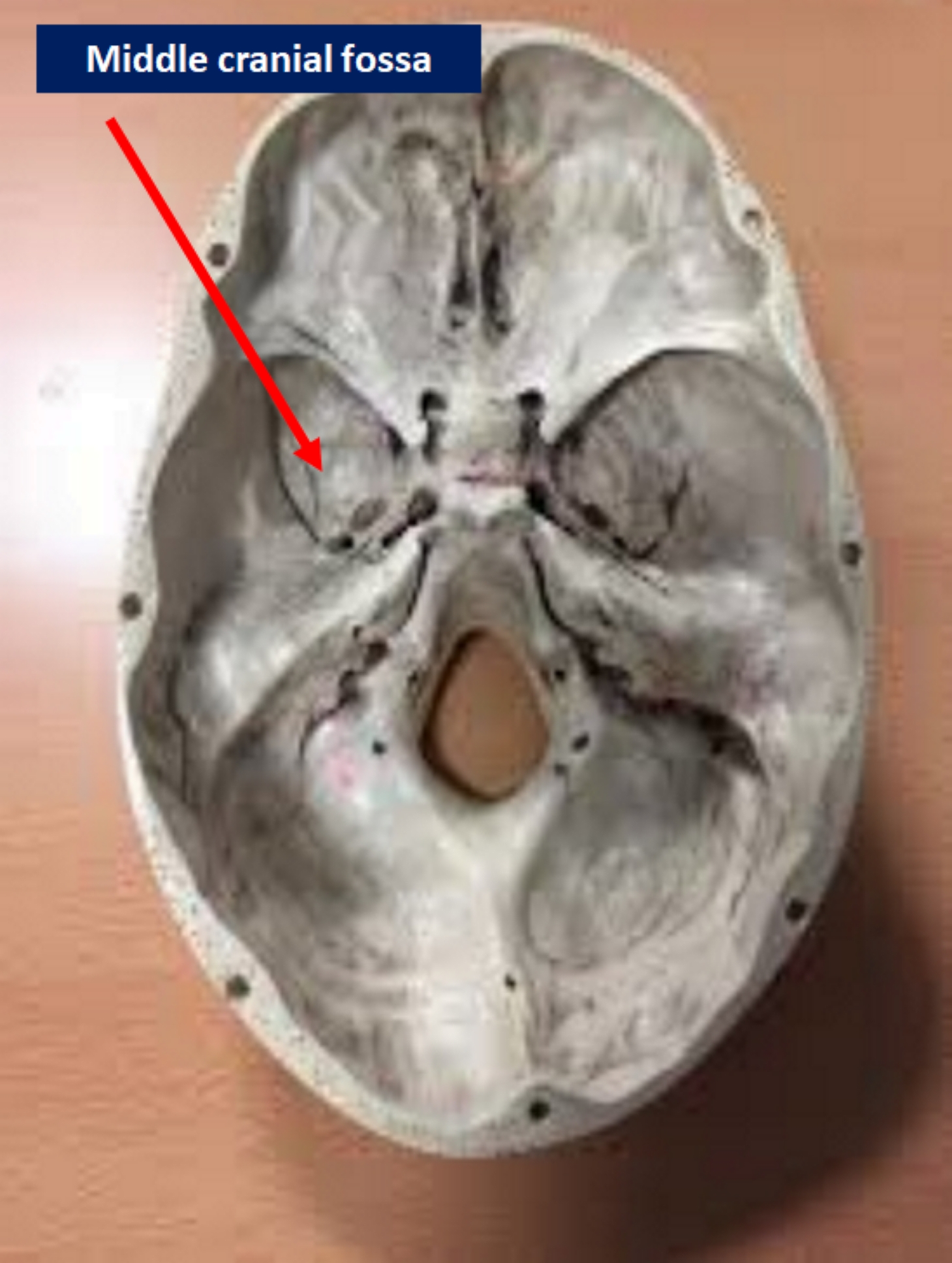