The act of perceiving taste is called gustation. The ability to taste is strongly linked to our ability to smell, olfaction. Dysfunction of taste and smell are generally low on the list of key clinical symptoms. However, the recent coronavirus disease 2019 (COVID-19) caused by the specific virus (SARS-COV-2) pandemic has been associated with loss of sense of smell and taste in up to 75% of patients both as the presenting or only symptom in patients with mild disease or as the initial symptom in patients who may ultimately progress to more serious respiratory failure due to pneumonia.

The diagnostic utility of anosmia exhibits low sensitivity (23-43%) but high specificity (93-99%) for the diagnosis of SARS-COV-2) infection. Similar symptoms were reported during the SARS (severe acute respiratory syndrome)-COV outbreak in 2003 and changes in taste and smell are also common in viral illnesses like the common cold or flu. As taste and smell are closely intertwined, it is believed that the vast majority of cases where taste is lost is rooted in damage to the olfactory system (smell). The gustatory system (taste) is usually not selectively impacted by viral upper respiratory infections.

Entry of SARS-COV-2 into the olfactory epithelial is related to the neurotropic and neuroinvasive properties of the virus which were previously reported in the previous SARS outbreak. SARS-COV-2 is able to enter non-neuronal cells of the olfactory epithelium and olfactory bulb including supporting sustentacular cells and pericytes which express angiotensin-converting enzyme-2. The viral spike protein binds to the angiotensin-converting enzyme-2 receptor expressed and these supporting elements which is essential for the integrity and function of the olfactory sensory neurons ultimately resulting in anosmia. Approximately 10% of patients show long-lasting impairment of smell and taste.

The brain has a dedicated area chiefly responsible for perceiving and distinguishing different tastes called the gustatory cortex. Its location in the anterior insula in the temporal lobe and frontal opercular region is the terminal connection serving taste perception. The system differentiates the subtleties of salty, sweet, sour, bitter, and umami (Japanese for savory, monosodium glutamate), the essence of flavor in our food.

First-order neurons originate as peripheral taste chemoreceptors found in papillae on the upper surface of the tongue, soft palate, pharynx, and upper aspect of the esophagus. Chemoreceptor stimulation, specific for individual tastes, triggers cellular depolarization, ultimately synapsing topographically with primary sensory axons that run in the chorda tympani and greater superior petrosal branches of the facial nerve CN VII (dorsal surface of tongue), the lingual branch of the glossopharyngeal nerve CN IX (soft palate and pharynx) and the vagus nerve CN X(upper part of the esophagus).

The central axon of these primary sensory neurons projects from their specific cranial nerve ganglia to the solitary tract in the medulla. Axons from the rostral gustatory solitary nucleus project to the ventral posterior medial nucleus of the thalamus VPM and ultimately terminate, both crossed and uncrossed, at the neocortex, the gustatory cortex (the anterior insula of the temporal lobe and frontal opercular region). Consciousness perception of flavor and experiencing the pleasurable (hedonic) value of food is subserved by the posterior part of the orbital frontal cortex. This area lies in close proximity to the primary olfactory piriform cortex (smell) both anatomically and physiologically positioning olfaction with gustation.

The gustatory nucleus is a group of neuron cell bodies that serve as an intermediate to relay gustation from the chemoreceptors in the mouth to the gustatory cortex. These neuron cell bodies are in the posterolateral portion of the brainstem known as the nucleus of the solitary tract. Specifically, the neurons found here are the second-order neurons in the pathway for gustation. The gustatory nucleus receives its input from first-order neurons: the afferent cranial nerve fibers from the facial (VII), glossopharyngeal (IX), and vagus (X) nerves. These fibers carry gustation from the anterior two-thirds of the tongue, posterior one-third of the tongue, and the epiglottis, respectively. JL Clarke and B Stilling first described the gustatory nuclei in the mid-19th century. Their early discoveries and contributions paved the way for what is known about the gustatory nucleus today. Due to its complexity, dysfunctions of taste can have clinical significance in fields including but not limited to neurosurgery, neurology, and otolaryngology. Therefore, knowledge of the function and structure of this neuroanatomical finding is essential in several practices of medicine.[1][2]

Surgery in the medulla poses significant risks due to the proximity of several structures vital for survival. With such a small margin of error, surgical interventions should only occur when absolutely necessary, as even millimeters of invasion into normal, healthy tissue can cause devastating effects to the body.

Although the brainstem location in which the nucleus gustatory resides is arguably the most critical for unconscious human functioning, the nucleus gustatory itself has limited clinical significance. There are several terms used to characterize pathologies in taste perception. As mentioned above in conjunction with the COVID 19 pandemic, olfaction is strongly linked to gustation and it is dysfunction of the olfactory mechanism that is the primary failure in taste (gustatory) disturbances.

The perception of taste can localize into two functional components: the peripheral arm and the central arm. The peripheral arm is most commonly the culprit in taste-related disorders. Abnormal saliva production, damage to taste buds, or damage to any of the branches of the cranial nerves supplying these taste buds can cause a decrease or absence in the perception of taste in the peripheral arm. One example of this is the damage to the Chorda Tympani that is a possible complication of surgery in the middle ear. This finding is, however, is infrequent as studies have documented the chorda tympani’s significant neuroplasticity allowing for the maintenance of taste in the presence of a damaged nerve.[7][8][9]

Many taste disorders are reversible and associated with various drugs, including antibiotics, anticonvulsants, and antidepressants. Regarding peripheral lesions of the cranial nerves VII, IX, and X, the facial nerve VII (chorda tympani) is affected most frequently. In idiopathic CN VII palsy (Bell palsy) taste dysfunction usually, hypogeusia can be the presenting complaint. Other considerations include Lyme disease (neuroborreliosis), herpes zoster, or a space-occupying lesion in the cerebellopontine angle such as a meningioma or neurinoma. Rare causes of peripheral gustatory dysfunction include polyneuropathies such as porphyria, connective tissue diseases, amyloidosis, diphtheria, and posttraumatic iatrogenic neuropathy following intubation or other laryngoscopic manipulations.

An isolated taste disorder is rarely the presenting symptom of either a brainstem, thalamic, or cortical lesion. Hemiageusia or hemi-hypogeusia at the level of the nucleus of the solitary tract presents with demyelinating diseases such as multiple sclerosis, ischemia, hemorrhage, or cavernous angiomas. A taste disturbance is usually associated with other neurologic symptoms, including hemiparesis, hemi-hypoesthesia, or ocular motor disturbance. Beyond losing taste perception, bilateral thalamic lesions may result in a psychological indifference to the pleasure in food intake (hedonic loss), resulting in considerable weight loss. Disturbances of taste can understandably go unrecognized in the face of major neurologic deficits due to ischemic stroke, intraparenchymal hemorrhage, neoplasm, and infections involving the insular cortex and frontal operculum.[10][11][12] 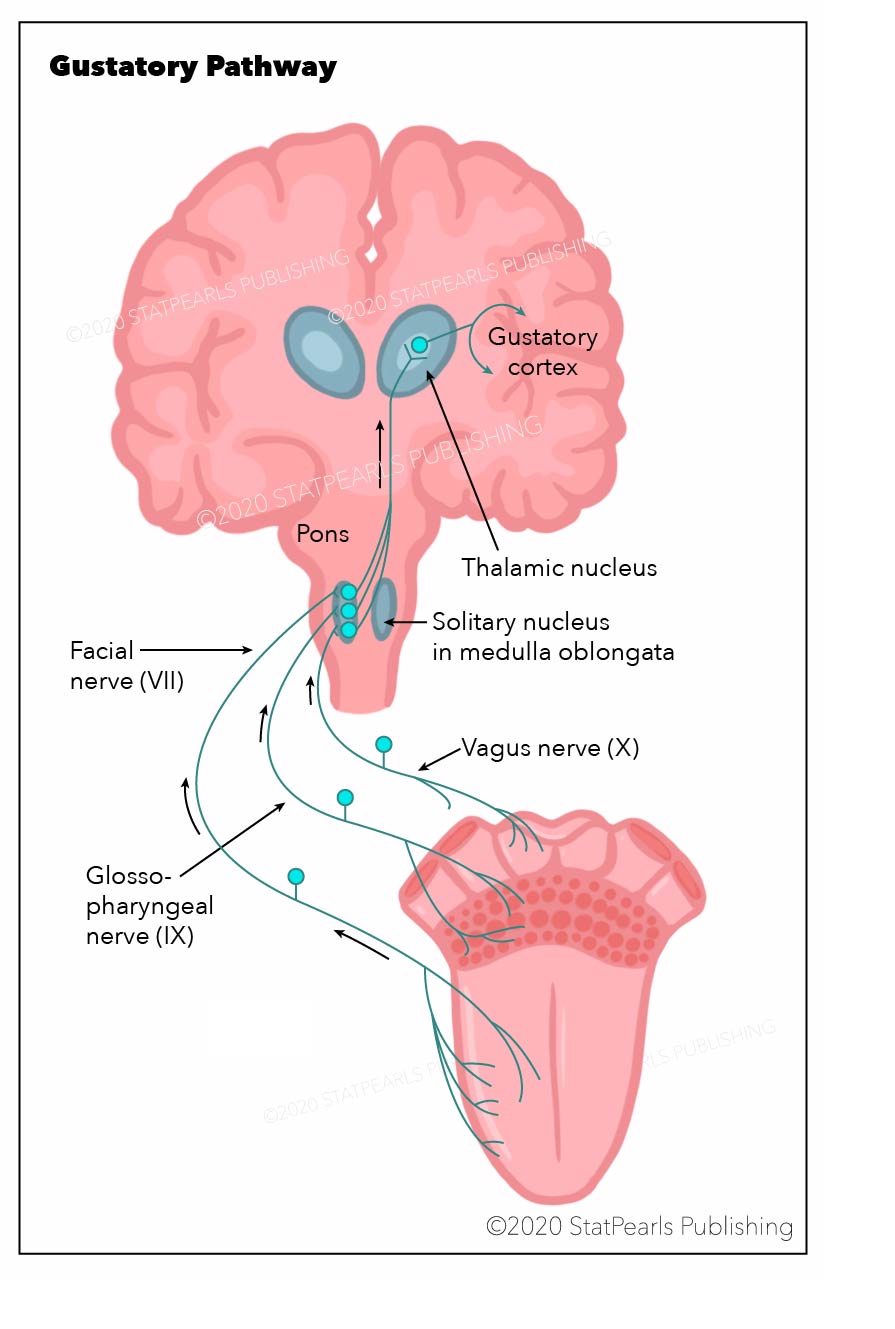