The stylohyoid muscle (musculus stylohyoideus in Latin) is one of the suprahyoid muscles of the neck that stretches between the base of the skull and the hyoid bone. The stylohyoid is paired and narrow muscle in close proximity to the digastric muscle, extending along the superior border of its posterior belly.

Ozgur et al. studied 56 specimens of stylohyoid muscles. They found that the point of insertion on the hyoid bone corresponded to the junction of the body and greater horn in 60.7% of cases, and in 39.3% of cases, the insertion point differed.[2] In these specimens, the muscle fibers were atypical and shaped like an arch in front of the hyoid bone. The fibers moved inward and inserted into the hyoid bone.[2]

The styloid process is a long needle-like structure that extends from the inferior surface of the petrous temporal bone.[4] The stylopharyngeus, stylohyoid, and styloglossus muscles and stylohyoid and stylomandibular ligaments insert into the styloid process.[4]

The styloid process' average length is 2 to 3 cm, and it tapers from its base to the apex.[5][4] Although uncommon, this slender bone projection has sometimes been found to be curved.[6]

The styloid process locates in between the external and internal carotid arteries.[2] Furthermore, other important anatomical structures are near the styloid process. Medially, it relates to the internal jugular vein, the superficial temporal, lingual, facial, maxillary, and internal carotid arteries, and the sphenomandibular ligament.[2][7][8][9] Laterally, it relates to the occipital artery, facial and hypoglossal nerves, and the posterior belly of the digastric muscle.[2][7][8][9]

The stylohyoid muscle develops from the mesoderm of the second pharyngeal arch.[10] It appears along with other suprahyoid muscles in the eighth week of gestation.[3]

The stylohyoid muscle receives its vascular supply from branches of the external carotid artery, and the occipital branch of the external carotid artery gives branches to the stylohyoid. Lymphatic drainage from this part of the neck goes into the submental and submandibular group of lymph nodes, and then it drains into the deep cervical group of lymph nodes.

The stylohyoid muscle may be absent or double in some individuals.[2] Physiological variation in its insertion area may also exist. It may insert into the mylohyoid muscle or omohyoid muscles. It has sometimes been found medial to the external carotid.[2]

In the marginal mandibular nerve lesion, which results in asymmetrical lips, surgical intervention is required to improve the aesthetic and functions. Stylohyoid muscle transfer is a possible surgical option when the digastric muscle is not an option.

The stylohyoid muscle is a part of a significant anatomical structure known as the stylopharyngeal septum/styloid diaphragm. This septum is considered an essential surgical landmark when attempting to enter the pharyngeal spaces. The septum divides the space into two compartments - prestyloid and retrostyloid - based on its relationship with the septum.

Partial ossification of the ligament of the stylohyoid muscle may lead to Eagle syndrome, also known as the stylohyoid syndrome.[12] This condition results in sharp shooting pain unilaterally in the jaw. The pain may radiate into the throat, tongue, or ear, which causes difficulty in deglutition, sore throat, and tinnitus.[12] Surgical resection of the ligament is required as it compresses the underlying structures.[13]

The facial nerve has a significant contribution to the oropharyngeal phase of deglutition through various muscles. It innervates the stylohyoid muscle in association with other muscles, such as the buccinator muscle, perioral muscles, and the posterior belly of the digastric muscle. Patients with peripheral facial palsy may experience swallowing difficulty.[14] Paralysis or weakness of the stylohyoid may occur if the facial nerve gets damaged. An intracranial facial nerve lesion (before its exit from the stylomastoid foramen) may occur due to a middle ear pathology (tumor or infection). An extracranial lesion of the facial nerve can occur due to an infection of the nerve such as herpes virus, compression during forceps delivery (since incomplete development of the neonatal mastoid process leaves the nerve unprotected), or it can be idiopathic.

Pathologic conditions associated with the stylohyoid muscle may result in cervical and pharyngeal symptoms such as neck pain laterally in the area of the angle of the mandible, submandibular space, and anterior upper neck. The pain may get exacerbated by normal actions such as speaking, swallowing, yawning, or head-turning. Myofascial pain syndrome can result in severe pain in the stylohyoid muscle; treatment includes nonsteroidal anti-inflammatory drugs to reduce pain and inflammation. Severe cases may require injections to numb the affected area.

If the stylohyoid muscle inserts in an unusual fashion where it covers the hyoid bone as a belt, patients may report stylohyoid syndrome symptoms, including orofacial and cervical pain usually triggered by neck movements.[2][15]

The stylohyoid muscle can be palpated by placing the fingers along the direction of the muscle fiber under the chin and superiorly to the hyoid bone. Palpation is done laterally from the hyoid bone towards the ear lobe along the anterior border of the sternocleidomastoid muscle. At the same time, the patient is asked to swallow or place the tongue against the mouth roof, pushing against it. 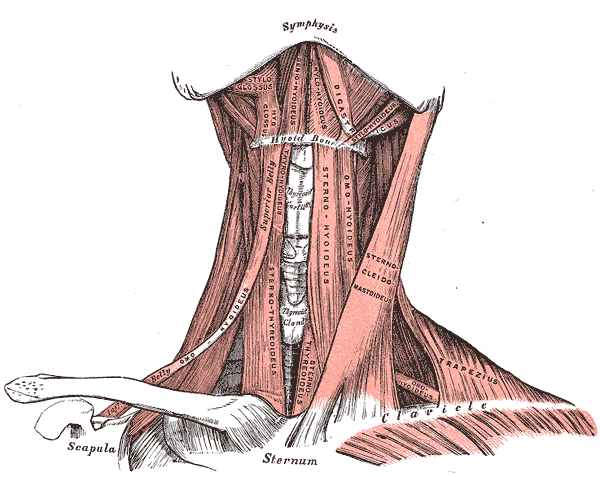 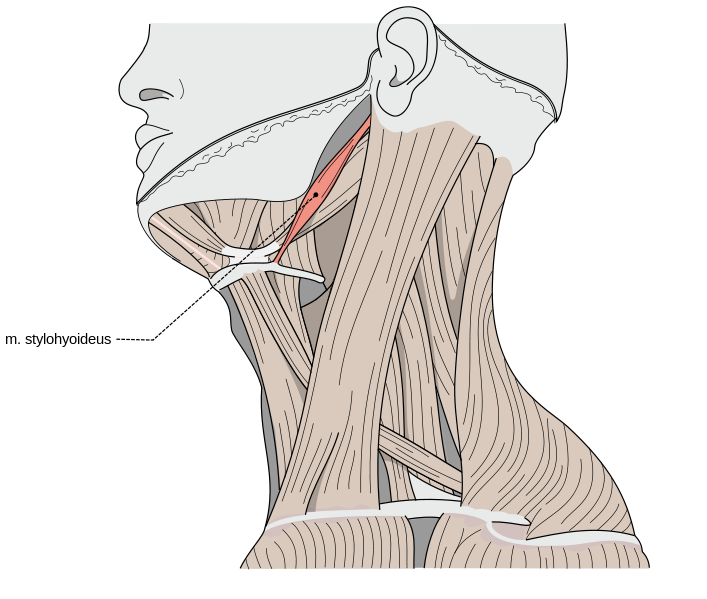 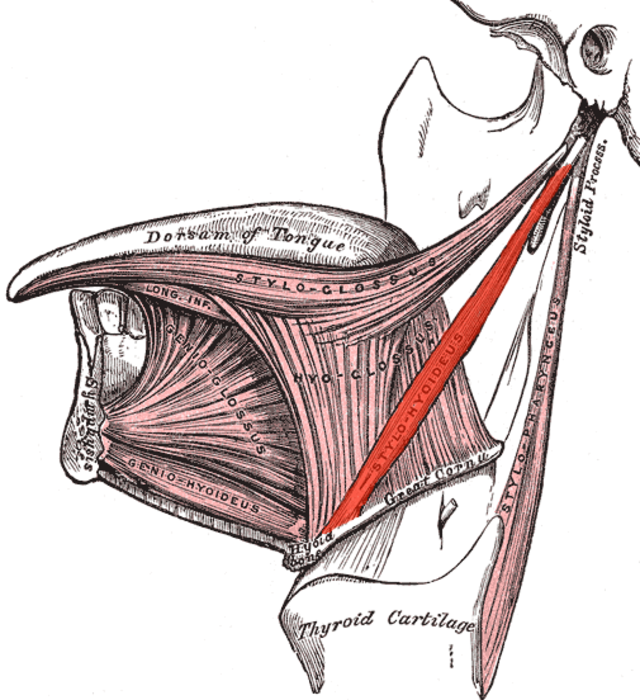 Illustration of the stylohyoid muscle highlighted in red.
This image is in the public domain.