The masseter muscle is one of the four muscles responsible for the action of mastication (chewing). When the masseter contracts it causes powerful elevation of the mandible causing the mouth to close. Its insertion along the angle and lateral surface of the ramus also allows it to aid in the protrusion of the mandible allowing for the anterior motion of the jaw.

The classification of the muscles of mastication refers to four main muscles including the masseter, temporalis, medial pterygoid, and lateral pterygoid. The actions of the muscles of mastication open and close the mouth by influencing motion on the mandible. The four muscles separate into a superficial group involving the masseter and temporalis muscles, and a deep group involving the medial and lateral pterygoids.

The masseter muscle is relatively well conserved across the human population as well as the animal kingdom as a muscle of mastication. The most noticeable difference is masseteric hypertrophy which is characteristic in populations of Asian descent. Masseteric hypertrophy characteristically shows as a benign condition of enlargement of the masseter muscles leading to a square jawline shape, which is a frequent target for esthetic treatments and botox requests.[5]

Performing surgery near the masseters requires consideration for the structures running near or originating from the muscle. Surgery of the masseter muscle is a component of facelift procedures, treatment of masseteric enlargement, or trauma. Careful consideration must be placed to not damage the masseteric ligament, fibers of the risorius muscle, and branches of the facial nerve.[6][7]

Masseter muscle rigidity (MMR), also known as "jaws of steel," occurs following a dose of succinylcholine and is defined as limb muscle flaccidity with jaw muscle tightness. There is a variable presentation from complete trismus and severe spasticity to a tight jaw response, which becomes concerning as the patient is unable to be adequately intubated, leading to an increased risk of malignant hyperthermia in the patient.

The masseter reflex, also known as the mandibular reflex or jaw-jerk reflex, involves opening the mouth and placing a finger on the chin of the patient and striking the finger with a reflex hammer. The downward force can cause a reflex action in the masseter muscles resulting in an elevation of the mandible. The normal response is very little to no reflex activity, but with a brainstem lesion involving an upper motor neuron lesion, hyperreflexia of the masseteric reflex is possible.[8]

Tetanus toxin comes from the gram-positive spore-forming bacteria Clostridium tetani. Tetanus toxin enters the body, binds to peripheral neurons, and is transported retrogradely to the spinal cord or brainstem. Once in the central nervous system tetanus toxin inhibits the vesicular release of inhibitory neurotransmitters, glycine. This disinhibition of lower motor neurons leads to sustained contractures and muscle rigidity including opisthotonus, respiratory failure, trismus, and dysphagia. Trismus is muscle rigidity and spasms primarily of the masseter and temporalis muscle leading to an inability to open the mouth and leading to smile characteristically called risus sardonicus.[9] 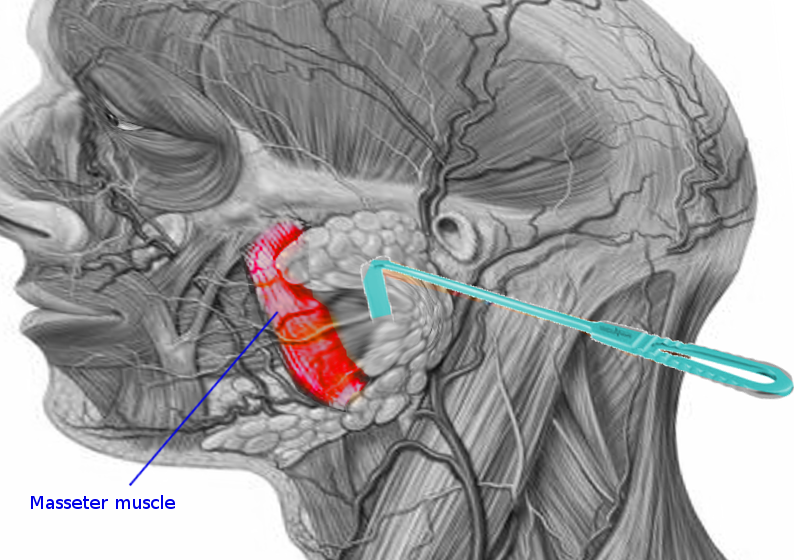