The optic fissure, also termed the choroid fissure, is an embryologic structure essential for the morphogenesis of the eye. Its formation and eventual closure are implicated in the morphogenesis of the iris, ciliary body, retina, choroid, optic nerve, and central retinal artery. It closes in the seventh week of development, and when it fails to close, it results in significant defects, the most prominent of which is coloboma.[1]

Eye development begins at day 22 of embryogenesis with the evagination of the neural tube from bilateral grooves in the neuroectoderm, forming the optic vesicles. Around five weeks as the neuroectodermal outpouchings form, a depression forms at their distal aspects leading to auto-invagination, which creates a double wall of neuroectoderm. This double-walled ectoderm gives rise to the optic cup. As the neural tube expands and involutes, the surface ectoderm at bilateral lens placodes simultaneously invaginates into these bilateral depressions, forming the lens vesicles. The interaction between the optic cup and lens vesicle results in the development of the optic fissure as the optic cup drapes over the hyaloid artery. In this way, a groove (fissure) is formed along the entire length of the invaginated double-wall neural tube, termed the optic stalk, which is the future optic nerve. This groove contains the hyaloid artery, allowing it to supply the future inner chamber of the eye without having to invade the neuroectoderm. During week 7, the edges of the optic fissure fuse, with the most distal apposition of these edges becoming the pupil. While the edges of the fissure close, the two layers of neuroectoderm comprising the stalk continue to proliferate to the point of apposition and fusion. Cells from the inner layer of neural tissue interact to form a neural network, and thereby the optic nerve is born. A narrow hollow space remains inside the stalk containing a remnant of the hyaloid artery, which gives rise to the central artery of the retina.[2][3]

The optic fissure exists as an invagination of the optic stalk, which is a double-layer of neuroectodermal tissue. The fissure contains undifferentiated mesenchymal tissue of mesodermal origin, which forms the hyaloid artery, eventually giving rise to the central artery of the retina. Closure of the fissure during weeks 6 to 7 and the inherent completion of the optic cup heralds the completion of many circumferential structures of the eye.[4][5]

The periocular mesenchyme cells (POM) derive from the ectodermal and mesodermal leaflets and influence the development process of the optic fissures and morphogenesis of the eye. An alteration of the coding of the genes responsible for creating these cells will lead to dysfunctions (lmx1b, zic2, TFAP2A/tfap2a).

Retinoic acid (RA) contributes to the complete formation of the choroid fissure and by influencing the transcription of the genes mentioned above. Furthermore, an RA deficiency will prevent the correct expression of another specific gene (pitx2), which will cause coloboma.

The proper development of the eye involves a complex interaction of a myriad of genes and molecular signals. During this process, it is important to understand that genetic mutations and inaccurate molecular products carry links to eye malformations. The full complexity of eye development is too broad for the scope of this article, and the mechanism is discussed further later in this article. Nevertheless, the most important of the genes involved include PAX6, PAX2, sonic hedgehog (SHH), BMP4, and Rx.[2][3][6]

PAX6 is coined as the primary control gene and indicates the eye field with its expression at the anterior neural plate. However, the eye field at this time is yet to undergo division for the creation of the globes. The belief is that SHH is responsible for the division of the eye field into two via suppression of PAX6.[7][8] As such, mutation or inhibition of SHH leads to cyclopia, a single eye. On the other hand, increased expression of SHH can lead to an absence of ocular structures. In the optic vesicles, there are two antagonistic molecular signals: SHH ventrally and BMP4 dorsally. These two signals coordinate together, mutually inhibiting each other, to create the normal pattern of the eye on its dorsal-ventral axis.[9] Additionally, SHH promotes PAX2 expression, which is an optic stalk marker.[10] PAX2 complements the retina marker PAX6, creating a distinct boundary between the optic stalk and the retina. Another gene expressed in the anterior neural plate, Rx, is crucial for the evagination of the optic vesicle and Pax6 expression.[11] In later stages, Rx may play an essential role in the differentiation of the retina.[6]

In addition to paired box gene 2 or PAX2, there are other transcription factors, such as ventral anterior homeobox 1 and 2 (VAX1 and 2); these affect the invagination of the choroid fissure. Other genes are called for an appropriate path: bone morphogenetic protein 7 (BMP7), fibroblast growth factors (FGFs), transforming growth factor beta2 (TGF-beta2), transcription factor AP-2 alpha (TFAP2A).

The optic fissure exists as a transient element in the development of the optic nerve, but despite its transience, it carries crucial functional significance for the time it exists. The optic fissure contains the hyaloid artery, allowing it to supply the developing inner chamber of the eye without penetrating the neuroectoderm. Beginning at week 5, the edges of the optic fissure begin to fuse, and by week seven, closure is complete with the most distal apposition of these edges becoming the pupil. Once closure of the optic fissure is complete, the two layers of neuroectoderm comprising the stalk continue to proliferate to the point of apposition and fusion. Cells from the inner layer of neural tissue interact to form a neural network, and thereby the optic nerve is born. A narrow hollow space remains inside the stalk containing a remnant of the hyaloid artery, which gives rise to the central artery of the retina.

Closure of the optic fissure is paramount to proper morphogenesis of many structures of the eye, and extensive cellular remodeling and patterning are required for the edges of this double-wall of neural tissue to fuse effectively. Key transcription factors, including Pax2, Pax5, Vax2, Tbx2, Tbx3, Tbx5, Vsx2, and Mitf, are essential for proper closure of the fissure. Their specific mechanisms in the development and closure of the optic fissure appear below.[12]

The transcription factor Pax6 is the key gene involved in eye development. Preceding morphogenesis of the eye, Pax6 is expressed at the anterior neural ridge of the neural plate before neurulation begins and is the primary eye field at this stage. Sonic hedgehog causes division of the central eye field into two optic primordia, upregulating Pax2 in the distal optic vesicle at its juncture with the surface ectoderm. Sonic Hedgehog promotes organized growth and involution of the optic cup by restricting the expression of Pax6 to the optic cup and upregulating Pax2 in the optic stalk and optic fissure margins. In this way, the morphogenic pathways of the optic cup and the optic nerve are distinctive. Heterozygous mutations in Pax2, Pax6, and SHH are known to cause coloboma.[13]

As the optic cup develops from the bi-layer outpouching of neuroectoderm, it has several unique interactions with the adjacent tissues that cause specialized differentiation. The fibroblast growth factor of the surface ectoderm at the lens placode promotes inward differentiation of the neural retina. This is accomplished via FGF-induced downregulation of Mitf, allowing Vsx2 expression and creating a separation between the neural retina and the retinal pigmented epithelium at the optic fissure margin. Transforming growth factor B of the surrounding mesenchyme promotes outward differentiation of the pigmented layer of the retina, a process requiring WNT-B-Catenin signaling. The search clear delineation in retinal layers at this margin is key to the full fusion of the optic fissure. Failure of signaling processes, particularly mutation of WNT receptor gene FZD5, has been implicated in coloboma.[14]

As the layers of the optic vesicle differentiate into the neural retina and retinal pigment epithelium, invagination occurs via another important signaling mechanism. To involute in the formation of the optic cup and fissure, the neuroectodermal cells of the inner layer of the optic vesicle need to undergo a conformational shape change. This change is brought about by the contraction of the actin-myosin cytoskeleton, which is regulated by the cytoplasmic actin genes ACTG1 and ACTB. Mutations of these genes are implicated in the development of coloboma, as seen in Baraitser-Winter syndrome.[15]

Once the invagination of the optic cup and fissure is complete, the next step is the closure of the optic fissure. This process begins at the mid-point of the fissure and proceeds distally and proximally. Studies suggest that as the margins of the fissure come into apposition, the outer layer fuses first, followed by the inner layer. The basement membranes from opposing sides of the fissure margins undergo breakdown, possibly via phagosome-mediated destruction. Studies suggest that the margins of both layers extend cytoplasmic protrusions that play a role in closure. Cadherin-mediated adherens junctions additionally contribute to the successful fusion of retinal layers. Research has shown that dysregulated breakdown at the fissure margins is involved in the pathogenesis of coloboma. CHARGE syndrome, in particular, is caused by mutations in the CHD7 gene, resulting in inappropriate expression of the pro-apoptotic gene p53, resulting in exaggerated apoptosis at the optic fissure and inadequate closure.[16]

Molecular genetic testing techniques can be useful in identifying a genetic cause for patients with congenital eye malformations in the microphthalmia, anophthalmia, coloboma (MAC) spectrum. Testing for the diagnosis of MAC includes clinical exam and corneal measurements, and imaging with ultrasound and computed tomography or magnetic resonance imaging of the brain and orbits.[17]

Failure of proper closure of the optic fissure can lead to the following defects:

The optic fissure plays an essential role in the development of a wide variety of ocular structures. As such, its clinical significance is broad. The classic example of an ocular condition due to errors in optic fissure embryogenesis is coloboma.

A coloboma is a congenital hole in a portion of an ocular structure. The etiology of colobomas is defective closure of the optic fissure.[20] Most frequently, the affected structure is the iris, yet most eye structures can have a coloboma. Several ocular abnormalities are associated with colobomas, such as microphthalmia, nystagmus, glaucoma, heterochromia, and strabismus. Colobomas carry associations with many syndromes, including the following, among others:

Blindness may occur in some cases of coloboma, and care is necessary to manage the condition to preserve vision. Patients often need genetics evaluation for systemic disorders, monocular precautions, and interval monitoring for retinal detachment. Treatment strategies vary based on the case, with a few options being the surgical repair of an iris defect, specialized cosmetic contact lens, prosthetic iris device placement, and refractive correction. 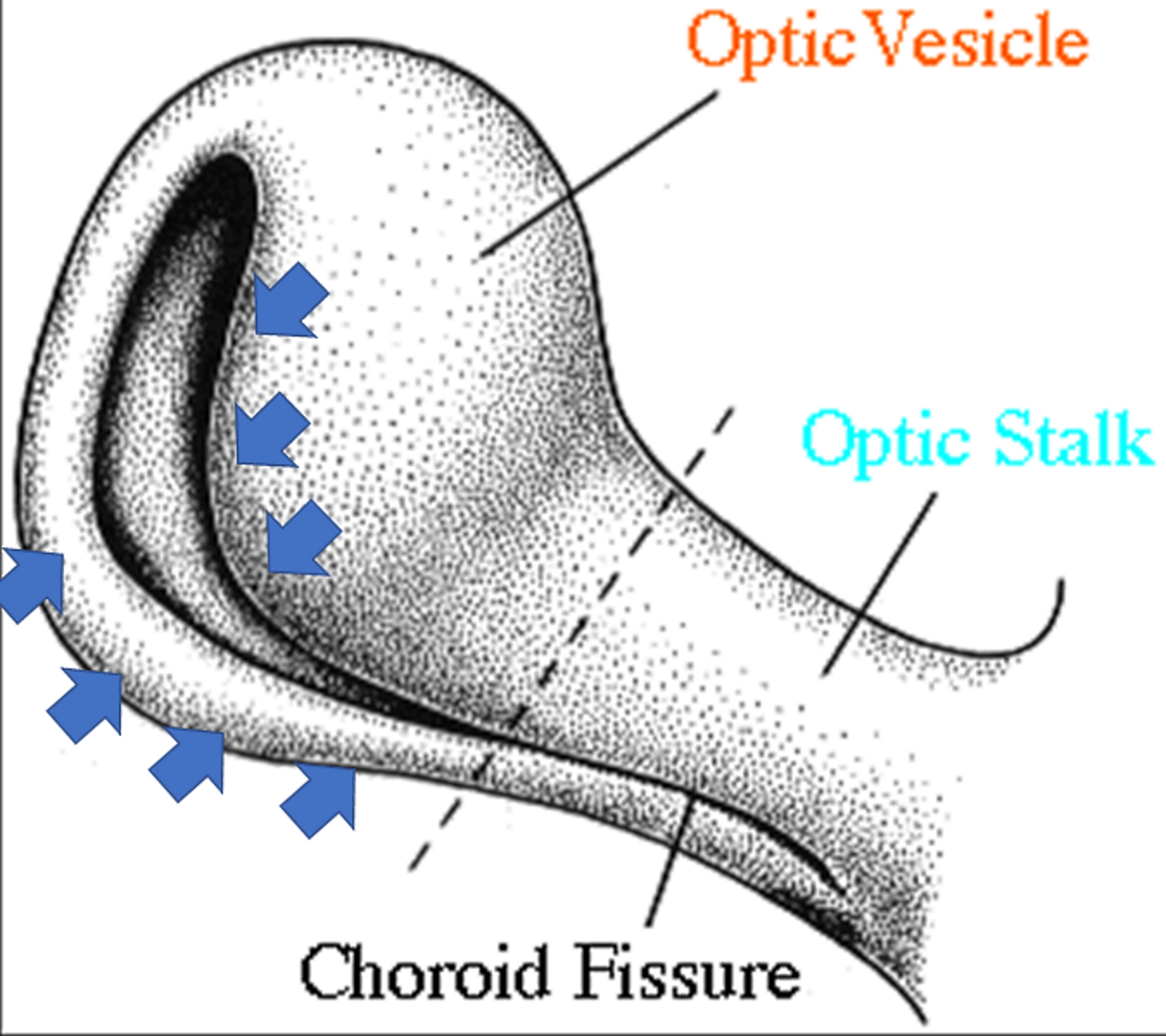 The figure shows the invagination process of the optic stalk and the optic vesicle, with the formation of the choroid fissure (inferiorly). The blue arrows indicate the direction and area of the invagination.
Contributed by Bruno Bordoni, PhD. 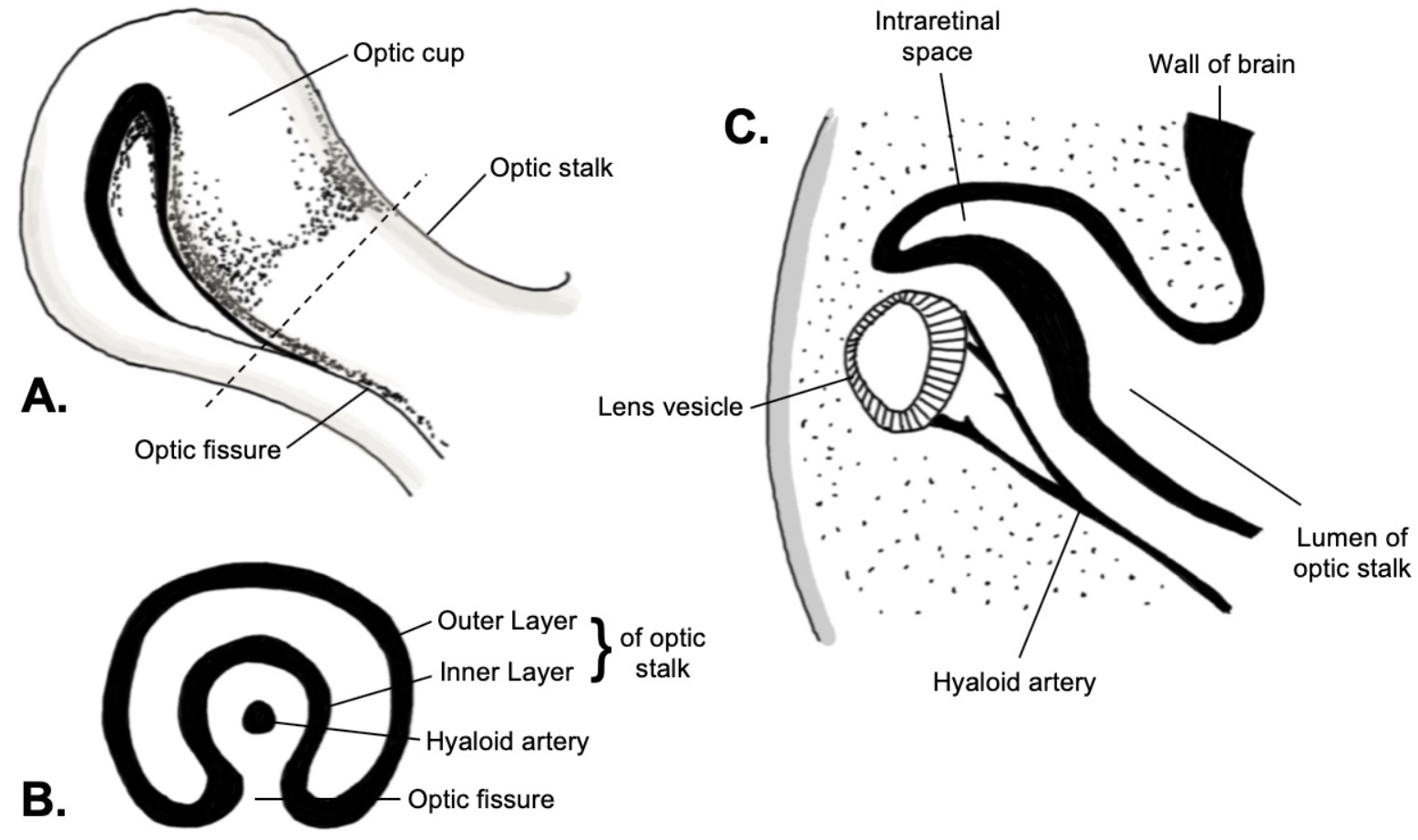