One of the most common reasons for clinical visits in the United States is sinusitis, also known as rhinosinusitis. It is also one of the top reasons that antibiotics are prescribed. Over a one-year period, there were up to 73 million restricted-activity days related to sinusitis and total direct medical costs of almost 2.4 billion, not including surgery or radiographic imaging. In addition, up to 14.7 percent of individuals surveyed in the National Health Interview Survey reported having had sinusitis the preceding year. This activity reviews the cause, presentation and pathophysiology of sinusitis and highlights the role of the interprofessional team in its management.

Sinusitis is one of the most common health complaints leading to a physician visit in the United States, as well as one of the leading causes of antibiotic prescriptions. In 1 year, there were up to 73 million restricted activity days in patients with sinusitis and total direct medical costs of almost $2.4 billion (not including surgery or radiographic imaging). In addition, up to 14.7% of people in one National Health Interview Survey had sinusitis the preceding year. The newer term is rhinosinusitis because purulent sinus disease without similar rhinitis is rare.

Causes are a combination of environmental and host factors. Acute sinusitis is most commonly due to viruses and is usually self-limiting. Approximately 90% of patients with colds have an element of viral sinusitis. Those with atopy commonly get sinusitis. It can be caused by allergens, irritants, viruses, fungi, and bacteria. Popular irritants are animal dander, polluted air, smoke, and dust.

There are higher rates of sinusitis in the South, Midwest, and among women. Children younger than 15 years of age and adults aged 25 to 64 years are affected the most.[1]

Other risk factors or sinusitis include[2]:

Most commonly a viral upper respiratory infection causes rhinosinusitis secondary to edema and inflammation of the nasal lining and production of thick mucus that obstructs the paranasal sinuses and allows a secondary bacterial overgrowth. There are frontal, maxillary, sphenoid, and ethmoid sinuses. Allergic rhinitis can lead to sinusitis also due to ostial obstruction. Ciliary immobility can lead to increased mucus viscosity, further blocking drainage. Bacteria are introduced into the sinuses by coughing and nose blowing. Bacterial sinusitis usually occurs after a viral upper respiratory infection and worsening symptoms after 5 days, or persistent symptoms after 10 days.

Tissue and culture results will reveal:

Minor factors (diagnostically significant only with one or more major factors) include a headache, halitosis, fatigue, malaise, dental pain, cough, and otalgia.

A physical exam is best performed after a topical decongestant. On exam, look for facial swelling, erythema, edema (most commonly periorbital), cervical adenopathy, postnasal drainage or pharyngitis. Anterior rhinoscopy may reveal mucosal edema, mucous crusting, frank purulence, obstructive polyps or other anatomical defects. Percuss the forehead and cheeks for deep tenderness. Transillumination of the sinuses may be helpful. There are five independent predictors of sinusitis: maxillary dental pain, abnormal sinus transillumination, poor response to nasal decongestants or antihistamines, colored nasal discharge, and mucopurulent seen on examination. The presence of four or more is highly predictive of sinusitis. The overall impression of the examining physician may be more accurate than any single finding[4].

No laboratory tests are indicated in the emergency department for acute uncomplicated sinusitis because the diagnosis is usually clinical. A plain sinus x-ray is most accurate for the maxillary, frontal, or sphenoid disease but is not useful for evaluating the anterior ethmoid cells or the ostiomeatal complex from which most sinus disease originates. Positive findings on plain films are air-fluid levels, sinus opacity, or mucosal thickening of 6 mm or more. Coronal CT at a thickness of 3 mm to 4 mm is the modality of choice. The CT findings suggestive of sinusitis are sinus opacification, air-fluid levels, sinus wall displacement, and 4 mm or greater mucosal thickening[5]. Culture and biopsy are indicated for chronic bacterial and fungal sinusitis[6].

Humidification, nasal wash, decongestants (topical or systemic) such as pseudoephedrine. Remember that oxymetazoline cannot be used for more than 3 days due to rebound congestion and that oral decongestants should be used with caution in hypertensive patients.  Antihistamines have not been shown to be useful and can lead to impaired drainage. They are only of benefit in early allergic sinusitis.  Topical steroids are used to diminish nasal mucosal edema but are more efficacious in chronic and allergic sinusitis. Only start antibiotics if you strongly suspect bacterial disease[7].

Antibiotics: Use empirically and based on community patterns of resistance. Ten to 14 days of amoxicillin or amoxicillin-clavulanate is first-line treatment. In some communities, amoxicillin effectiveness is less than 70%. Trimethoprim-sulfamethoxazole well for some, but there is a higher rate of resistance. Failure of symptoms to resolve after 7 days of therapy should prompt one to switch to a broader spectrum agent, such as ten to fourteen days of augmentin, cefuroxime axetil, other second or third-generation cephalosporins, clindamycin alone or along with ciprofloxacin, sulfamethoxazole, a macrolide, or one of the fluoroquinolones.[8] Metronidazole may be added to any one of these agents to increase anaerobic coverage. For chronic sinusitis, antibiotics should cover S. aureus and be effective against the higher incidence of beta-lactamase producing organisms that are common in chronic disease. If the patient is not improving after 5 to 7 days, add metronidazole or clindamycin. Treat for 3 to 6 weeks.

Most cases of uncomplicated acute bacterial sinusitis can be treated as an outpatient with a good prognosis. Frontal or sphenoid sinusitis with air-fluid levels may require hospitalization with intravenous (IV) antibiotics. Patients who are immunocompromised or are toxic appearing require admission. Fungal sinusitis is associated with high morbidity and mortality[10].

Sinusitis may extend to the bones and soft tissues of the face and orbits. Facial cellulitis, periorbital cellulitis, orbital abscess, and blindness can develop. Sinusitis can lead to intracranial complications such as cavernous sinus thrombosis, epidural or subdural empyema, and meningitis.[11][12]

Sinusitis is a common disease that is best managed by an interprofessional team that includes nurses and pharmacists. The key to treatment is to reduce the triggers. Patients should be urged to quit smoking. In addition, empirical use of antibiotics should be avoided. The outcomes depend on the cause but irrespective of treatment, recurrences are common and lead to a poor quality of life. 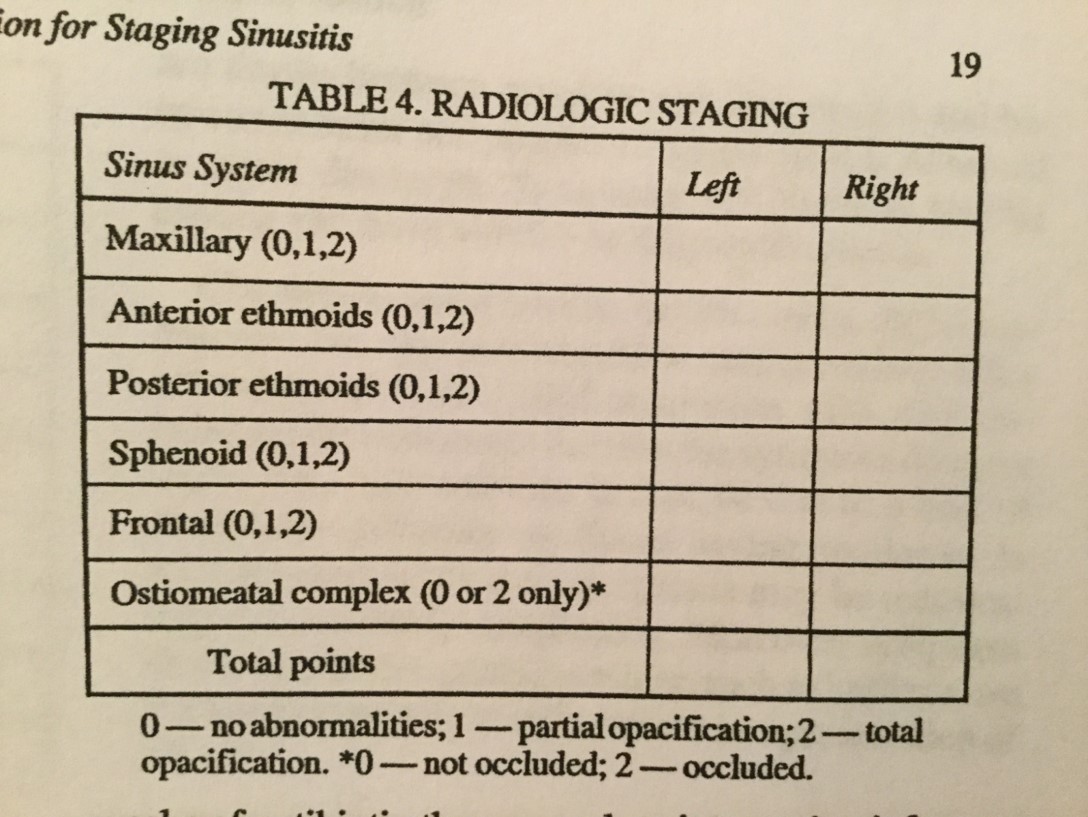 Lund-Mackay scoring system used for staging sinusitis. Based upon non-contrast CT scan of the sinuses.
Contributed by Dr. Carl B. Shermetaro DO 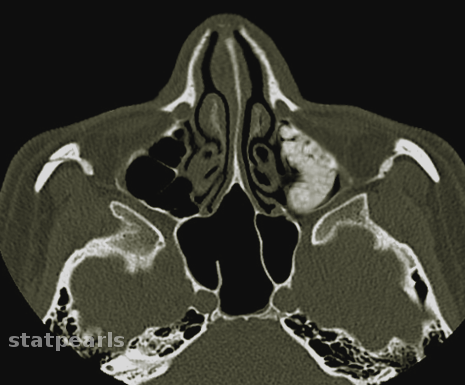