A duodenal biopsy is performed during endoscopy in either a directed or random manner. The biopsy results further characterize visualized areas on endoscopy and can also diagnose abnormalities, such as celiac disease. This activity describes duodenal biopsy and reviews the role of the interprofessional team in improving care for patients who undergo duodenal biopsy.

Biopsy of the duodenum is performed during an upper endoscopy to yield tissue for processing for pathological examination. Duodenal biopsies are performed either in a random fashion for detection or surveillance of disease, or in a directed manner to correlate with microscopic pathology of either likely or apparent abnormal areas in the duodenum. Of note, select pediatric gastroenterology units can perform lactase assays on the biopsies to assess for this enzyme deficiency. One of the most common reasons for conducting a duodenal biopsy is to diagnose or monitor the celiac disease.

Tissue processed from endoscopic duodenal biopsies is put on slides and stained with hematoxylin and eosin (H and E). Other staining is guided by history and clinical suspicion and includes Giemsa (Giardia), Alcian Blue (gastric metaplasia, adenoma), Periodic-Acid Schiff (Whipple Disease) and Masson trichome (collagenous sprue).[1] Multiple other specific stains could be necessary for evaluating an opportunistic infection in an immunocompromised host.

There are a variety of specific indications for a duodenal biopsy, but broadly the two main reasons are diagnosis and surveillance. Furthermore, it subdivides based on the technique of tissue collection, whether it is directed or random. Whether the biopsy is diagnostic or for surveillance purposes depends on the clinical scenario.

Biopsies are performed in a directed manner for suspected or obvious pathology such as a mass, polyp, nodule, ulcer, or abnormal mucosa. Biopsies are performed randomly in subjects with malabsorption, acute diarrhea in an immunocompromised patient, chronic diarrhea, suspected drug toxicity (e.g., aspirin), and systemic disease, such as lymphoma. The ampulla is an area in the descending duodenum that houses the distal common bile duct and pancreatic duct in which adenomas are very common; this is a particular concern in the condition, familial adenomatosis polyposis (FAP) syndrome, where duodenal surveillance is mandatory to assess for the development of adenomas. Duodenal lactase activity can be determined in children with chronic diarrhea.

Biopsies are directed at apparent abnormalities such as polyps, nodules, masses, and ulcers in the duodenum. Random biopsies are frequently performed to exclude or monitor celiac disease. One recommended technique for celiac disease is to perform at least two biopsies each in the duodenal bulb and descending duodenum.[5][6] A submucosal lesion of the duodenum is a protuberant entity where the overlying mucosa is either normal or not indicative of the lesion. Common duodenal submucosal lesions include duplication cysts, leiomyomas, Brunner glands, and gastrointestinal stromal tumors (GIST). Tissue from subepithelial layers may sometimes be obtained by bite-on-bite techniques, but endoscopic ultrasound (EUS) with possible directed needle biopsy is the preferred approach.[7]

Complications are unusual after duodenal biopsies. Abdominal pain may occur after multiple or deep biopsies. The most common complication necessitating intervention is hemorrhage. The gastroduodenal artery and its branches have a variable often close relation to the medial wall of the descending duodenum and may be inadvertently punctured.[8] Patients may have hematemesis or coffee-ground emesis, or more commonly, melena or rectal bleeding.

Substantial hemorrhage may result in hypotension, and lesser volume loss detected by tilt test maneuvers. Interventions include repeat upper endoscopy with attempted hemostasis, interventional radiology, or rarely surgery. Perforation after duodenal biopsy may require surgery, though conservative management may be a consideration if the defect is small and the patient stable. Ampullary biopsy, whether directed or inadvertent, may result in pancreatitis.[9]

Lactase is necessary for the digestion of the disaccharide lactose. Most persons have a genetically programmed decline in lactase activity after weaning. It is sometimes useful to determine lactase activity, including patients with chronic diarrhea and excessive bloating without an alternative etiology. Practically, lactase deficiency is diagnosable via hydrogen breath testing after a lactose load. However, such testing cannot be performed on all patients, and sometimes the breath test is considered to be not indicative of lactase deficiency. In these latter cases, lactase, which is an enzyme located on the small bowel surface, can be measured in specialized labs on endoscopic mucosal biopsy specimens or more easily with a rapid grosser assay performed at endoscopy on the specimen.[10] Sucrase-isomaltase deficiency is a life-threatening genetic entity manifested in infancy. Other enzymes, such as trehalase, can be measured but are rarely of any clinical significance.

Celiac disease or gluten-sensitive enteropathy is largely undiagnosed and estimated to occur in about 1% of the global population.[11] Many celiac subjects are asymptomatic and nonspecific symptoms include fatigue, abdominal pain, bloating, and intermittent diarrhea. Decreased absorption of iron and calcium can result in anemia and loss of potential height, respectively. Celiac disease is also associated with infertility and thyroid disease.

Genetically susceptible subjects have a hypersensitivity to the gluten peptide found in wheat, barley, and rye products. The hypersensitivity can result in gross or microscopic small intestinal inflammation. The duodenum is a prime area since it first encounters the gluten emanating after gastric digestion. Endoscopic features include diminished size and number of duodenal folds, scalloping, fissuring, and a mosaic pattern have also been described. However, sometimes endoscopic findings are subtle or not present.

Typical duodenal microscopic features are increased lymphocytes in the mucosa, duodenal villus atrophy, and prominent crypts. Multiple duodenal biopsies are obtained since the inflammation is often patchy. There are available sensitive and specific serologies for celiac disease, but most authorities require a duodenal biopsy for diagnosis and monitoring.[12] The performance of screening random biopsies for celiac disease in an elderly individual has limited benefits for the subject but may have significance for blood relatives. Treatment for celiac disease is a gluten-free diet.

Giardiasis is a global parasitic scourge especially prevalent in parts of Russia and presents in those drinking unprocessed water such as mountaineers and travelers. Infected subjects may be asymptomatic or complain of intermittent bloating and watery diarrhea. It is usually diagnosed by stool studies, but occasionally the trophozoites are noted on the duodenal surface. Savvy pathologists in endemic areas can readily diagnose this with appropriate staining.[13]

Immunocompromised hosts include those with immunodeficiencies such as human immunodeficiency virus infection, cancer patients receiving chemotherapy, including checkpoint inhibitors, and organ transplant recipients on medications to prevent rejection. There are a plethora of microorganisms that can cause infections in the subjects that sometimes are detectable on duodenal biopsies including viruses (cytomegalovirus, herpes simplex virus, etc.,), parasites (cryptosporidium, Giardia, strongyloidiasis, etc.,), fungi (microsporidia) and bacteria (mycobacteria).[14] Duodenal malignancies in these subjects include Kaposi sarcoma and non-Hodgkin lymphoma. Graft versus host disease in hematopoietic stem cell transplanted subjects can be diagnosed by duodenal biopsies though there is a concern for bleeding with thrombocytopenia.[15]

The gram-positive bacterium Tropheryma whipplei is the etiologic agent of Whipple disease, which potentially affects multiple systems, including the small intestine, central nervous system, heart, skin, and joints.[16] This rare syndrome has protean symptoms such as diarrhea, bloating, anorexia, and weight loss. Neurologic manifestations include depression and symptoms resembling dementia, such as memory loss, ataxia, and myoclonus. Subjects may have hyperpigmented skin, arthralgias, and mesenteric lymphadenopathy.

Crohn disease is a relatively common inflammatory disease with both genetic and environmental causation that can affect any part of the gastrointestinal tract. Upper gastrointestinal Crohn disease is less common than ileal or colonic involvement but can occur solely or with involvement elsewhere.[17] Duodenal endoscopic manifestations include duodenitis, aphthoid erosions, and stenosis. The latter may be difficult to differentiate from peptic stenosis. Duodenal pathology observed in patients with proximal Crohn disease includes transmural inflammation and predominance of lymphocytes. Granulomas are not common in biopsy specimens from Crohn disease patients but are relatively specific for this entity in a consistent clinical setting.[18]

Systemic diseases with abnormal tissue infiltration often have duodenal involvement and thus can be diagnosed by duodenal biopsy. Both myeloma-associated (AL) and secondary (AA) amyloidosis can be diagnosed by duodenal biopsies.[19] The stomach is most commonly involved with sarcoidosis, but it rarely is also seen in the duodenum.[20] Mastocytosis patients have increased acid production, often causing duodenal ulceration.[21]

Duodenal eosinophilia has been controversially linked to irritable bowel syndrome and is also present in parasitic infestation and the eosinophilic infiltrative disorders, including eosinophilic gastroenteritis.[22] The duodenum can be involved in rheumatologic diseases, including vasculitis, systemic lupus erythematosus, Bechet disease, and others.

Duodenal adenocarcinoma is less common than gastric or colon carcinoma and associated with a poor prognosis. It is commonplace for the more prevalent pancreatic malignancies to invade into and obstruct the duodenum. The duodenum has an excellent blood supply and is thus an area for remote metastases. These include melanoma, lung cancer, colon cancer, squamous cancer, and less commonly breast-cancer.[23] Non-Hodgkin lymphomas, including mucosa-associated lymphoid tissue (MALT) lymphoma, most commonly involves the stomach but can involve the duodenum.[24] Carcinoids are common in the duodenum, and occasionally malignant gastrointestinal stromal tumors are present.

Duodenal biopsies obtained at endoscopy are performed either in a directed manner towards pathological areas or randomly to detect or monitor the disease, including particularly celiac disease. Malabsorptive, infectious, inflammatory, rheumatologic, infiltrative, and neoplastic diseases are diagnosable via the biopsies.

Pathology obtained from duodenal biopsies can affect the management of known diseases such as celiac disease or can diagnose a new disease that would prompt various management and treatment pathways. Gastroenterologists, nurses, endoscopy technicians, and pathologists participate in the acquisition and interpretation of the duodenal biopsy. Interprofessional management based on the pathology could also include primary care providers, specialties such as oncology and rheumatology, and dietitians. Consensus recommendations would optimize the patient’s prognosis. 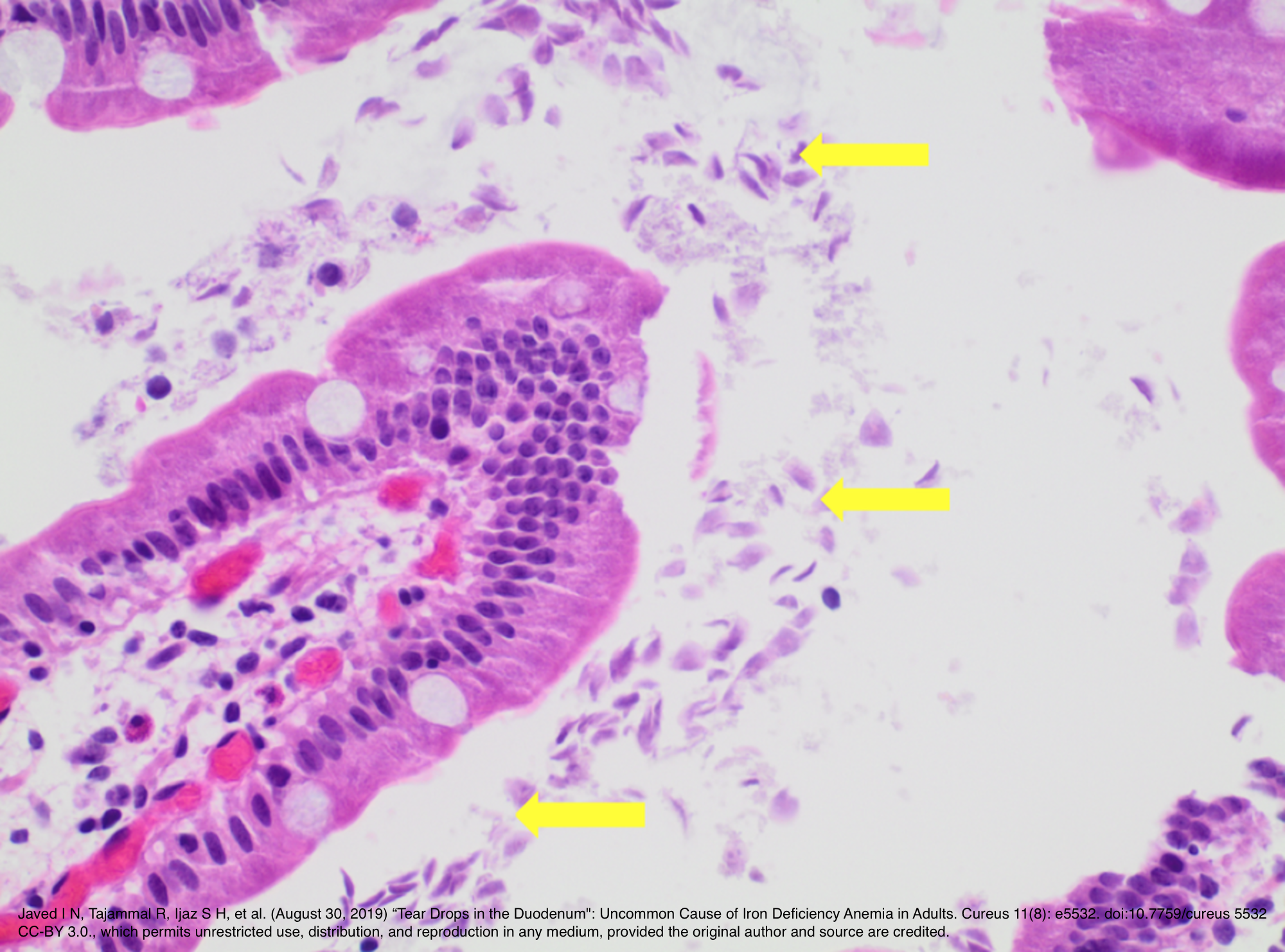 H & E at 40x showing Giardia duodenalis surrounding the entire villus.
From Javed I N, Tajammal R, Ijaz S H, et al. (August 30, 2019) “Tear Drops in the Duodenum": Uncommon Cause of Iron Deficiency Anemia in Adults. Cureus 11(8): e5532. doi:10.7759/cureus.5532. Image is from open access article distributed under the terms of the Creative Commons Attribution License CC-BY 3.0., which permits unrestricted use, distribution, and reproduction in any medium, provided the original author and source are credited. 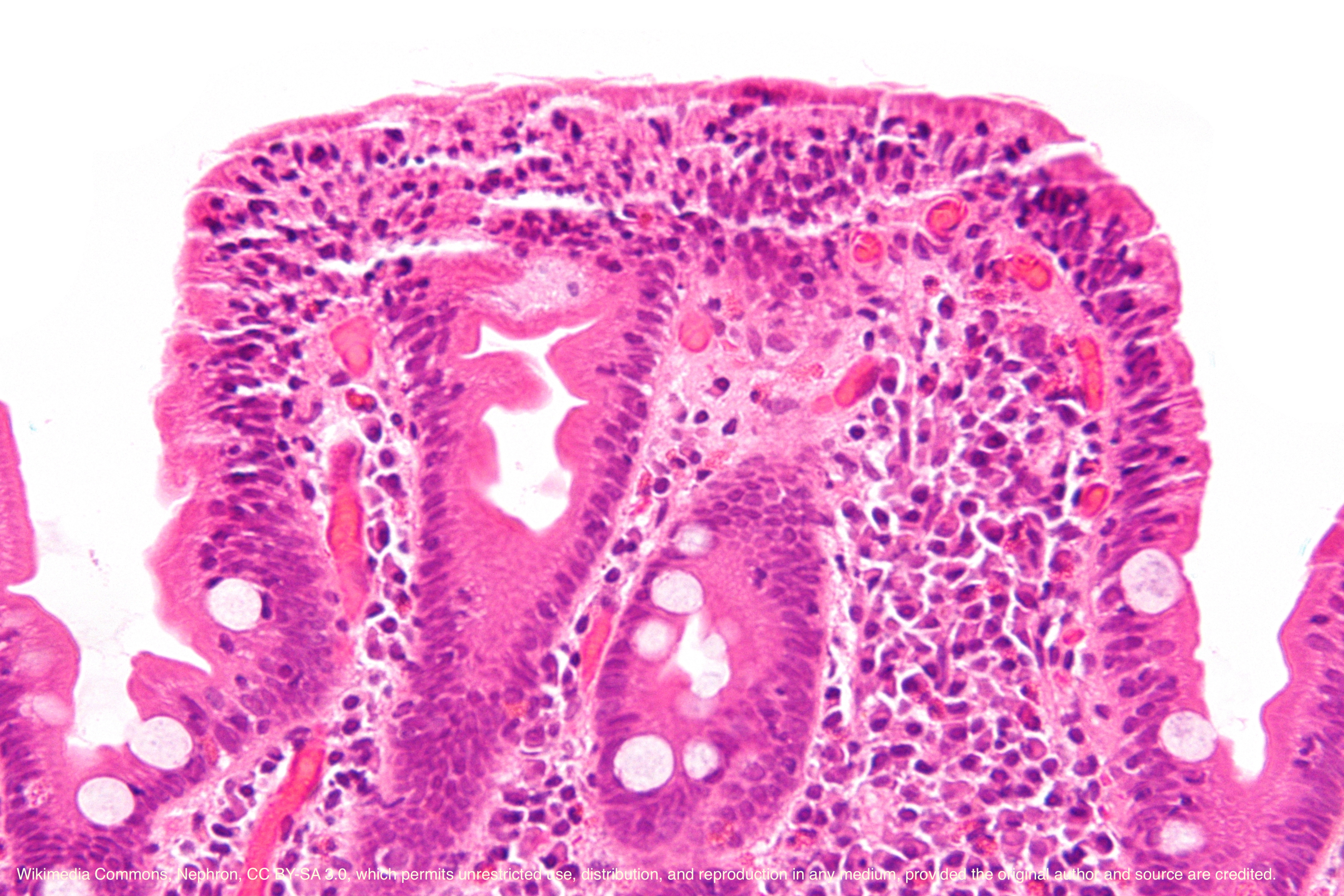 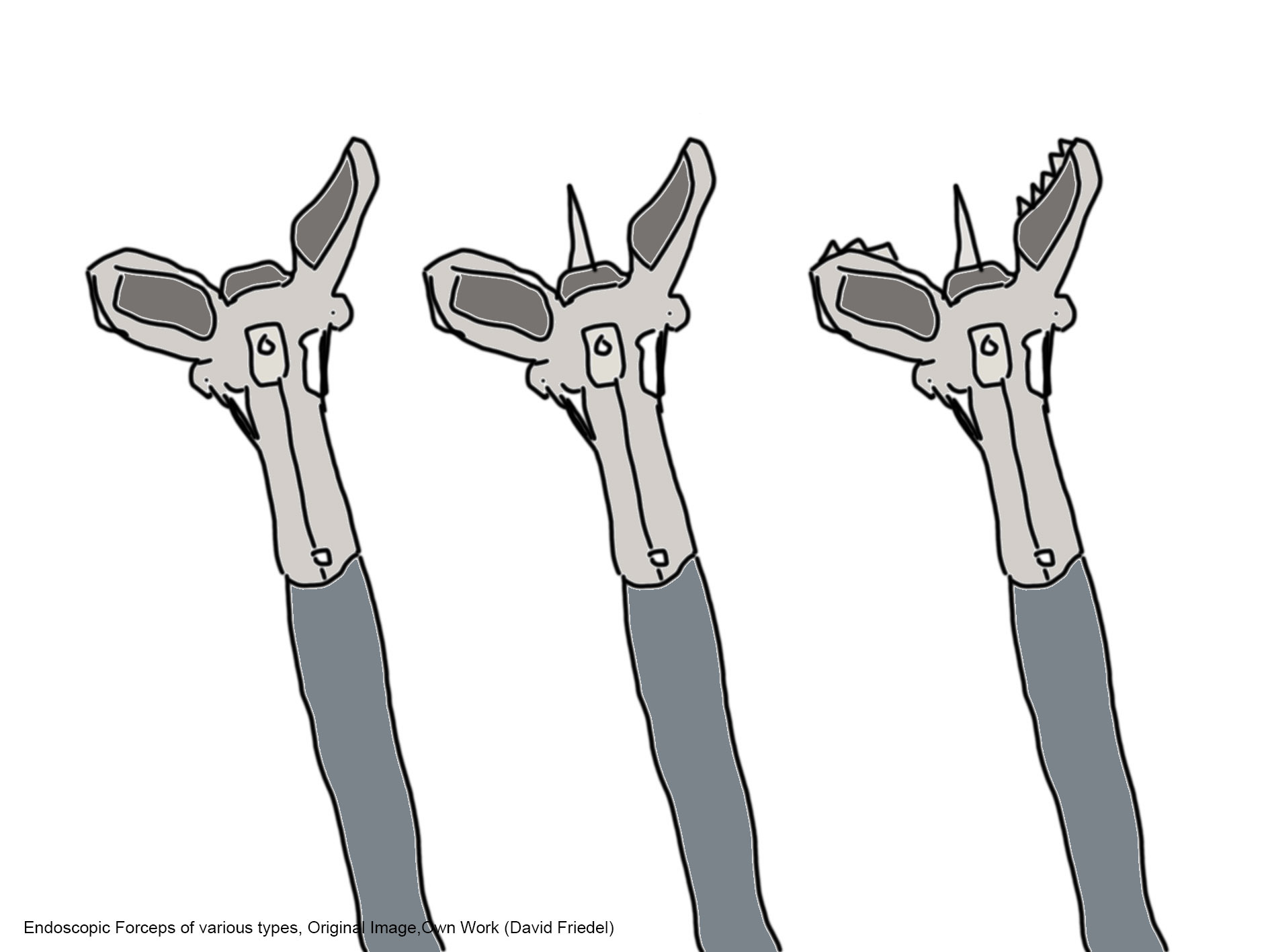