The bowel, which is composed of the small and large intestines, is vital to life as it absorbs nutrients necessary for all body functions. It is essential to understand the embryology of the bowel as errors in development serve as the basis for many congenital diseases.

The gastrointestinal tract divides into the foregut, midgut, and hindgut. The foregut forms the esophagus, stomach, pancreas, and the duodenum up to the ampulla of Vater. The midgut forms the distal duodenum, jejunum, ileum, cecum, ascending colon, and proximal two-thirds of the transverse colon. Finally, the hindgut forms the distal one-third of the transverse colon, descending colon, sigmoid colon, and the rectum.[1] This article will focus on the development of the midgut and hindgut and explore developmental abnormalities that may occur during this process.

Gastrulation is a process that occurs early in development and forms the three primary germ layers: endoderm, mesoderm, and ectoderm.[2] The gastrointestinal tract derives from these layers, and each layer contributes to a specific role in the mature intestine. The endoderm forms the innermost layer of the bowel, which is the epithelial layer of the intestinal mucosa. The mesoderm forms the muscular layer and the lamina propria. The ectoderm creates the enteric nervous system which develops from neural crest cells.[3]

Early in the formation of the primitive gut tube, the endodermal layer recruits the splanchnopleure mesoderm which goes on to become the bowel mesentery, connecting the gut tube posteriorly in the embryo.[4] By week four of development, the division of the gastrointestinal tract into the foregut, midgut, and hindgut has occurred.[5]

The small and large intestines undergo rapid growth during weeks four and five of development. Embryological science believes that the enlarging intestines quickly outgrow the space available in the abdominal cavity causing the entire midgut to herniate into the umbilical cord forming a loop. The superior limb of the intestinal loop forms the ileum while the inferior limb forms the colon. Between the two limbs is the vitelline duct which connects the intestine to the yolk sac. From here, the bowel continues to grow and rotate for the next five weeks as follows:

During the time of midgut growth and rotation, other developmental changes are occurring simultaneously, including[6][7][6]:

The enteric nervous system (ENS), which allows for intrinsic innervation of the gastrointestinal tract derives from neural crest cells. The enteric nervous system has two ganglion plexus layers: the myenteric plexus, which occupies a position between the circular and longitudinal muscles and the submucosal plexus. The development of the ENS begins at week four of development when neural crest cells develop in the foregut. These cells then migrate distally and reach the hindgut around week seven. Smooth muscle in the gastrointestinal tract also matured in a proximal to distal fashion starting at week eight and concluding around week eleven. Interstitial cells of Cajal, which serve as the pacemaker cells of the ENS, are found in the bowel wall by eleven weeks.[6]

Lgr5 + stem cells (leucine-rich repeat-containing G-protein coupled receptor 5) develop during the growth of intestinal villi and crypts and are essential for the biochemical balance of the intestine. These stem cells are also present in the formed intestine.

The bowel movement during the ontogenetic process occurs by the concomitant intervention of the enteric system development. This combination is made possible by the presence of embryonic nitric oxide (NO). Its deficiency (NO) causes a decrease in intestinal amplitude and contractile frequency and reduced response to cholinergic, including adrenergic and non-adrenergic non-cholinergic (NANC) stimuli (ATP, GABA, dopamine, neuropeptide Y, vasoactive intestinal peptide, and other molecules).

The development of the bowel is a complex process that relies on many signaling mechanisms. There are also many genes required to induce anterior-posterior patterning, which causes differentiation of the foregut, midgut, and hindgut structures. The NODAL gene induces expression of specific transcription factors at different points in the gastrointestinal tract including the anterior (rostral) expression of Hhex, FoxA2, and Sox2 and posterior (caudal) expression of Cdx2 and Wnt. These differences are responsible for the difference in the intestinal epithelium from proximal to distal. These genes must be active during gastrulation to have proper development of the gastrointestinal tract.[2]

Intestinal villi are stimulated to develop by crosstalk between the endoderm and mesenchyme. Hedgehog signals from Shh and Ihh are essential in the development of the mesenchyme as well as promoting villus formation. Mesenchyme expresses BMPs and PDGFR-alpha to stimulate villus emergency and Sox9 in intervillous areas, restricting villi formation in these locations.[2]

The primary function of the bowel is to absorb nutrients from the diet. It also has a role in the endocrine system and the immune system.

Detecting errors in bowel formation may occur in-utero in cases such as intestinal atresia or omphalocele, during the early postnatal period in cases such as Hirschsprung disease or may go undetected in cases such as malrotation. Prenatal ultrasound can detect polyhydramnios, which is a condition that can occur when the fetal gastrointestinal tract does not process the amniotic fluid produced by the fetal kidneys.[1] Duodenal atresia impedes the passage of amniotic fluid, causing polyhydramnios. Other signs of duodenal atresia detected on prenatal ultrasound include distention of the stomach and proximal duodenum, termed the double bubble sign. Fetal MRI can confirm this finding and can also discover more distal small bowel atresia. Another abnormality detectable in the fetal period by using fetal MRI is anal atresia, although it is more commonly found postnatally when there is a failure to pass meconium.[8] Omphalocele often turns up during routine prenatal ultrasound as well as elevated maternal serum alpha-fetoprotein concentration.[9] Hirschsprung disease most commonly presents after birth with failure to pass meconium and diagnosis can be confirmed with a suction rectal biopsy.[10]

The complexity of bowel formation allows for many areas in which there can be errors in development. These errors manifest as the following diseases[11][12][9][13]:

Bowel embryology is a complex process that depends on proper signaling from many transcription factors to have proper growth, rotation, and functional epithelium with villi. Understanding the normal sequence of events is important as the basis for many congenital gastrointestinal diseases are a result of errors in this process. 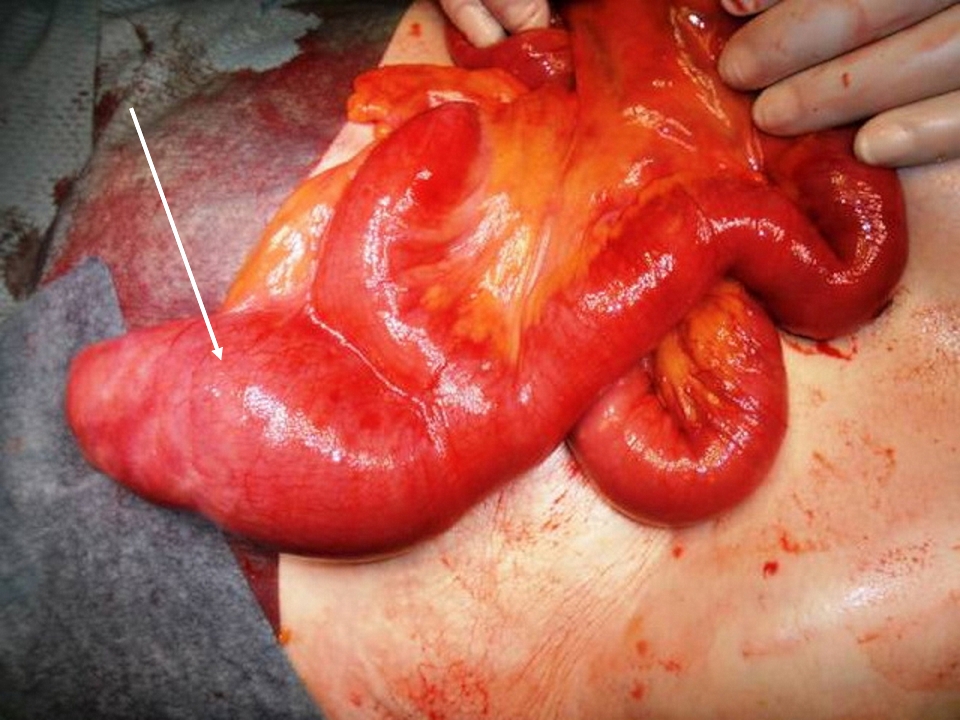