The tracheobronchial tree is composed of the trachea, the bronchi, and the bronchioles that transport air from the environment to the lungs for gas exchange.

The trachea originates at the inferior edge of the larynx and connects to the left and main stem bronchus. The primary function of the trachea is to allow passage of inspired and expired air into and out of the lung. The trachea is a midline structure and lies just anterior the esophagus.

After it originates from the larynx, the trachea divides into the left and right mainstem bronchi. This junction point is called the carina. The tracheal diameter is about 24 to 26 mm in adult males and 22 to 24 mm in females. It is much broader in the proximal area than the distal segment. The trachea is 16 to 20 C-shaped cartilage rings stacked one on top of another. A narrow thin membrane connects each of the tracheal rings. The posterior aspect of the trachea is adjacent to the anterior esophagus.

The trachea has four layers. The inner mucosal layer has a lining of ciliated pseudostratified columnar epithelium with goblet cells. These cells are responsible for secreting mucus which coats the inner lining of the trachea. The mucus traps dust particles and other debris before they reach the lung. The cilia function to propel the dust away from the lung.

The submucosa is located just below the mucosa and contains nervous tissue and blood vessels. This layer also contains elastin and collagen fibers, which provide the trachea with support and elasticity. The presence of smooth muscle in the submucosa allows for the trachea to alter its diameter. A layer of hyaline cartilage supporting the tracheal rings surrounds the submucosa. The hyaline cartilage layer is sturdy but flexible and prevents the collapse of the trachea during expiration. The outermost layer is the adventitia, consisting of loose connective tissue that anchors the trachea to the adjacent soft tissues.

The trachealis muscle found in the posterior wall allows the trachea to contract and decrease its diameter. This muscle is vital for coughing, getting rid of secretions, foreign particles, saliva, or food. The main reason why the C-shaped cartilage rings are incomplete is that they allow the trachea to narrow. This action is helpful, especially when eating food, which requires the expansion of the esophagus.

The pseudoglandular stage begins at approximately the fifth week and results in the formation of the bronchial tree. The tertiary bronchial buds continue to undergo branching morphogenesis until the end of week 16. Respiratory epithelium differentiation begins during this stage when cilia form on the surface of columnar epithelial cells in the proximal airway. Differentiation then progresses in a proximal-to-distal pattern for the duration of this phase of rapid branching. At the end of this stage, the respiratory tree has developed until the terminal bronchioles with the associated arterial system, cartilage, and smooth muscle.

The canalicular stage begins at approximately 16 weeks as the terminal bronchioles continue to elongate, forming an acinus composed of respiratory bronchioles. Splanchnic mesenchyme angiogenesis surrounding the newly formed acinus gives rise to a capillary network that will function as part of the blood-air barrier. During this stage, Type II pneumocytes begin producing surfactant and storing it in intracellular lamellar bodies. The presence of lamellar bodies can help to distinguish Type II pneumocytes from other cell types. Once secreted, surfactant is crucial in reducing alveolar surface tension and preventing atelectasis.

The saccular stage begins at approximately 24 weeks and demonstrates a significant expansion in the gas-exchange surface area and termination of branching morphogenesis. During this stage, the terminal (acinar) portions of the airways expand, forming large airspaces lined with primarily Type I pneumocytes known as saccules. Saccules are separated by primary septa composed of a double-layered capillary network and a central layer of condensed mesenchyme. By the end of this stage, the capillaries contained in the primary septa invade the walls of individual saccules, creating the blood-air barrier.

The alveolar stage begins at approximately 36 weeks with the appearance of alveolar protrusions in the primary septa of individual saccules. The new septations formed are referred to as secondary septa to distinguish them from the primary septa formed during branching morphogenesis. These secondary septa will eventually be responsible for the division of saccules into alveoli. The process of alveolar division begins as a burst and gradually slows during the first three years of life. During this time of rapid alveolar expansion, the double-layered capillary network present in immature primary and secondary septa fuses to create a single-layered capillary network. This microvascular maturation allows for more efficient gas exchange.

The arterial supply of the proximal trachea consists of the tracheoesophageal branches of the inferior thyroid artery and small branches from the subclavian, internal mammary, and innominate artery. The distal trachea, carina, and bronchi are supplied by the bronchial arteries, which usually originate from the proximal descending aorta. Before entering the trachea, each vessel branches superiorly and inferiorly across several tracheal rings, creating a lateral longitudinal anastomosis. From this anastomosis, transverse intercartilaginous arteries enter the space between the tracheal rings and course either anteriorly or posteriorly. The anterior transverse intercartilaginous arteries will travel between the rings and eventually terminate in the submucosal capillary plexus once they reach the midline. This plexus will serve as the blood supply for the tracheal cartilage while the membranous portions of the trachea are supplied directly by secondary branches of the tracheoesophageal arteries.

The dual blood supply of the lungs includes the high-pressure bronchial arteries and the low-pressure pulmonary arteries. The bronchial arteries provide 1% of total blood flow to the lungs and supply the non-respiratory portions of the lungs, visceral pleura, intrapulmonary blood vessel walls, and lymphatic system. The pulmonary arteries provide the other 99% of the total blood flow to the lung and bear the responsibility for carrying deoxygenated blood from the right ventricle to the gas-exchange portions of the lung.

Venous drainage of the bronchi occurs in part through the bronchial veins into the azygous and hemiazygous systems. The remaining blood drains into the pulmonary veins as they return to the left heart.[5][6][7][8]

The trachea receives parasympathetic innervation from branches of the vagus nerve (CNX). After exiting the skull, the bilateral vagus nerves travel along the posterolateral aspect of the common carotid arteries until entering the superior mediastinum. The right recurrent laryngeal nerve branches first, passes underneath the right subclavian artery and travels superiorly along the right tracheoesophageal groove. The left recurrent laryngeal nerve branches underneath the aortic arch, lateral to the ligamentum arteriosum, and travels superiorly in the left tracheoesophageal groove. As these nerves ascend, they give off branches that provide parasympathetic, somatic, and motor innervation to the trachea. Both the left and right recurrent laryngeal nerves then enter the larynx through the inferior constrictor muscles of the pharynx. Damage to the recurrent laryngeal nerves during surgery can cause vocal cord paralysis, leading to hoarseness or complete loss of voice. Sympathetic innervation of the trachea is provided by the middle cervical ganglia bilaterally.

The C-shaped cartilages of the trachea are connected posteriorly by a membranous wall, and a longitudinal strip of smooth muscle called the trachealis muscle that is in contact with the anterior esophagus. The trachealis muscle functions to constrict the airway by pulling the cartilages together, allowing for increased expiratory force during coughing. Smooth muscle contained in the walls of the lower conducting airways is necessary for bronchoconstriction.[11][8][12]

In cases of esophageal atresia with a distal TE fistula, polyhydramnios is often a finding on prenatal imaging due to the inability of the newborn to swallow amniotic fluid. After birth, this inability to swallow causes excessive salivation regurgitation after feeds. Infants also classically present with respiratory distress and choking. Urgent surgical intervention is required, and the post-operative survival rate is now greater than 90%.

Tracheomalacia includes a variety of different conditions characterized by weakness of the trachea. This weakness, whether congenital or acquired, causes increased collapsibility of the airway. During normal breathing, pressure changes within the thoracic cavity cause the trachea to change shape. These pressure changes, in the presence of decreased tracheal integrity, can lead to partial or total airway collapse. This airway collapse generally becomes exacerbated when pressure is increased, such as coughing or Valsalva. Symptoms vary based on the extent of trachea collapsibility and breathing patterns. If bronchial weakness/collapse is present, the condition is called tracheobronchomalacia. Bronchoscopy is currently the gold standard of diagnosis for these conditions.[13][14][15]

Operations involving the tracheobronchial tree require an intimate understanding of normal anatomy, common and uncommon variants, and surrounding anatomical structures. The surgeon must be prepared to secure the patient’s airway if complications arise.

When performing a tracheostomy, the cannula is usually inserted between the second and third tracheal rings. The tracheostomy should not be made in the first ring as it risks subglottic stenosis. Performing a tracheostomy below the third tracheal rings increases the risks of a tracheoinnominate artery fistula. In patients with a tracheostomy and a rigid feeding tube down the esophagus, there is always a danger of forming a tracheoesophageal fistula. One serious complication of this procedure is airway fire, which occurs if highly oxygenated air present in the trachea becomes exposed to the electrocautery. Because of this possible complication, inspired oxygen should remain below 30%, and a scalpel should be used to enter the trachea.[9][6]

Infantile respiratory distress syndrome, or IRDS, is often seen in premature births due to either insufficient production of pulmonary surfactant or abnormal lung development. Because surfactant production begins at 20 weeks gestation and continues through birth, the risk of IRDS is inversely proportional to gestational age. Decreased surfactant concentration increases surface tension in the alveoli, leading to alveolar collapse on expiration and increased work of breathing. The inefficient ventilation and gas exchange results in hypoxia and hypercarbia. Clinical signs of respiratory distress in a newborn include labored breathing, tachypnea, and nasal flaring. Prompt recognition and treatment of this syndrome are important to prevent respiratory arrest.[16][17]

Asthma is a common inflammatory disease of the airway that can range from mild respiratory compromise to life-threatening airway closure. It is classically considered a disease of the conducting airways and generally spares the lung parenchyma. Although the etiology is not well understood, affected individuals generally have a genetic predisposition to an allergy that is exacerbated by a variety of environmental factors that cause inflammation. The hallmarks of asthma include bronchial hyperresponsiveness, chronic inflammation, and reversible airway obstruction.  Symptoms include coughing, wheezing, chest tightness, and shortness of breath. Symptoms generally begin in childhood, but the presence of symptoms early in life does not guarantee disease persistence into adulthood. Diagnosis is made when airway obstruction shows to be reversible with pulmonary function testing. Treatment is based on symptom severity and requires routine monitoring and adjustment to optimize disease control. Today, the gold standard of treatment includes inhaled corticosteroids for maintenance therapy supplemented by a short-acting beta-agonist used as needed for the rapid relief of symptoms. Without adequate recognition and treatment, mortality for this condition is high.[18][19][20]

Alpha-1 Antitrypsin deficiency is an autosomal recessive genetic condition that primarily affects the lungs and the liver. Decreased serum alpha-1 antitrypsin protein levels characterize the disease. The liver produces this enzyme, and it is responsible for the deactivation of proteolytic enzymes released during immune responses in lung tissue, particularly neutrophilic elastase. Because lung tissue has continuous exposure to airborne pathogens, the ability to downregulate the immune response is crucial for the maintenance of healthy lung parenchyma. Insufficient serum alpha-1 antitrypsin levels lead to unchecked inflammatory responses in the lungs and the eventual degradation of lung tissue, leading to progressive COPD and panacinar emphysema.  Symptoms of a homozygous recessive carrier of the disease generally manifest early in adulthood. Additional risk factors, such as smoking, can accelerate the disease process and further decrease life expectancy.[21] 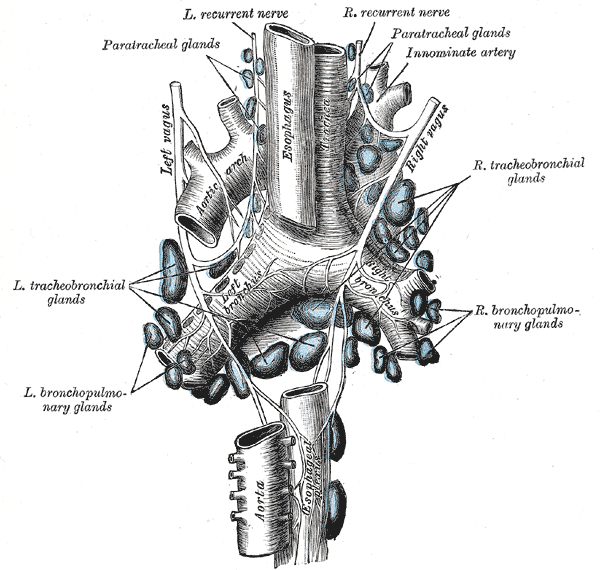 Rackley CR,Stripp BR, Building and maintaining the epithelium of the lung. The Journal of clinical investigation. 2012 Aug;     [PubMed PMID: 22850882]