Vertebrae, along with intervertebral discs, compose the vertebral column, or spine. It extends from the skull to the coccyx and includes the cervical, thoracic, lumbar and sacral regions. The spine has several major roles in the body that include: protection of the spinal cord and branching spinal nerves, support for thorax and abdomen, and allows for flexibility and mobility of the body. The intervertebral discs are responsible for this mobility without sacrificing the supportive strength of the vertebral column. The cervical region contains seven vertebrae, denoted C1-C7, which are the smallest of the vertebral column. The intervertebral discs, along with the laminae and the articular processes of adjacent vertebrae, create a space through which spinal nerves exit. The cervical vertebrae, as a group, produce a lordotic curve. While all vertebrae share most morphologic features, there are several notable features in the cervical region.[1][2]

Typical vertebrae consist of a vertebral body, a vertebral arch, as well as seven processes. The body bears the majority of the force placed on the vertebra. Vertebral bodies increase in size from superior to inferior. The vertebral body consists of trabecular bone, which contains the red marrow, surrounded by a thin external layer of compact bone. The arch, along with the posterior aspect of the body, forms the vertebral (spinal) canal, which contains the spinal cord. The arch consists of bilateral pedicles, cylindrical processes of bone that connect the arch to the body, and bilateral lamina, flat, bone segments form most of the arch, connecting the transverse and spinous processes. A typical vertebra also contains four articular processes, two superior and two inferior, which contact the inferior and superior articular processes of adjacent vertebrae, respectively. The point at which superior and articular facets meet is known as a facet, or zygapophyseal, joint. These maintain vertebral alignment, control the range of motion, and are weight-bearing in certain positions. The spinous process projects posteriorly, and often inferiorly from the vertebral arch and may overlap the inferior vertebrae to various degrees, depending on the region of the spine. Lastly, the two transverse processes project laterally from the vertebral arch in a symmetrical fashion.

There are three atypical vertebrae found in the cervical region. C1, also known as “atlas,” is unique among all vertebrae in that it lacks both a vertebral body and a spinous process. The relatively circular bone contains two bilateral masses that take the place of a body in its load-bearing capacity. The superior articular facets of these masses contact the occipital condyles of the skull, and the inferior facets articulate with superior facets of C2. C2, also known as “axis,” is distinct in that it contains bilateral masses to articulate with C1, a body, through which weight is transmitted through C3 and below, and an odontoid process, or “dens,” on the superior aspect of the body. The dens articulates with the posterior surface of the anterior arch of C1. C7 may be considered typical or atypical but has two distinct features. The first is that unlike the rest of the cervical vertebrae, is that the vertebral artery does not traverse the transverse foramen. The second is that it contains a long spinous process, also known as “vertebra prominens.”[3]

As with all physiology, the anatomy of a structure is related directly to its function. The smaller size of cervical vertebrae relative to the other regions is a reflection of their decreased load-bearing requirements. Their decreased size allows for the greatest range of motion of all vertebral segments. The transverse and spinous processes serve as points of attachment and leverage for cervical and upper thoracic musculature. Atlas has the lowest load-bearing requirement of all vertebrae, which accounts for its small size and lack of vertebral body. The absence of the body and the positioning of the lateral masses allows for the majority of cervical flexion and extension (motion in the sagittal plane) to occur through the atlantooccipital joint. The dens of C2 serves as an axis around which C1 rotates. This allows for the rotation of the head in the transverse plane. Due to the size of the intervertebral discs and the orientation of the facet joints, the cervical region has the greatest flexion ability of the spinal column.

The meningeal branches of spinal nerves innervate all vertebrae.

The position of foramen transversarium is very important due to its content being the vertebral artery. This is of utmost importance while placing the posterior lateral mass screws in the subaxial cervical spine and during transarticular screw implantation for atlantoaxial fixation, as a misdirection of the screw can injure the vessel which may result in significant neurological deficits and catastrophic bleeding.

Atlas fractures make up a small fraction of all vertebral spine fractures (approximately 2%). They tend to occur when the skull is forced in an inferior direction. It is known as a Jefferson fracture when the atlas fractures at the anterior and/or posterior arches, the weakest points. In a Jefferson fracture, the transverse ligament may be damaged. This ligament extends from one lateral mass of atlas to the other, passes between the dens and the spinal cord, and is responsible for stabilizing the articulation of the dens on the axis. A Jefferson fracture requires cranial traction and immobilization. Fracture and damage to the transverse ligament require an immediate fusion of cervical vertebrae via occipito-cervical arthrodesis to prevent spinal cord injury.[6]

Hangman fracture is a bilateral spondylolisthesis of C2, resulting from hyperextension-distraction, in which the pedicles of C2 are fractured, and the body of C2 is displaced from its position on C3. The Levine and Edwards classification of this fracture describes four subtypes of this injury. This fracture is poorly named as it is rarely found in those who have been hanged and most commonly is found in victims of automotive collisions.

Cervical spondylosis is a broad term that refers to a degenerative disease of the spine, intervertebral discs, ligaments, and cartilage. This disease is common in individuals over 40 years of age, and the main risk factors are age and occupation. This disease process is significant in that it greatly increases the likelihood of cervical radiculopathy, the compression of nerve roots, and of cervical spondylotic myelopathy, the compression of the spinal cord. Electromyography and nerve conduction studies may determine the severity of nerve damage, while MRI is used to detect bone, spinal cord, and intervertebral disc abnormalities. Depending on the severity, both conditions may be treated either conservatively with anti-inflammatory medication and physical therapy, or with corrective surgery. 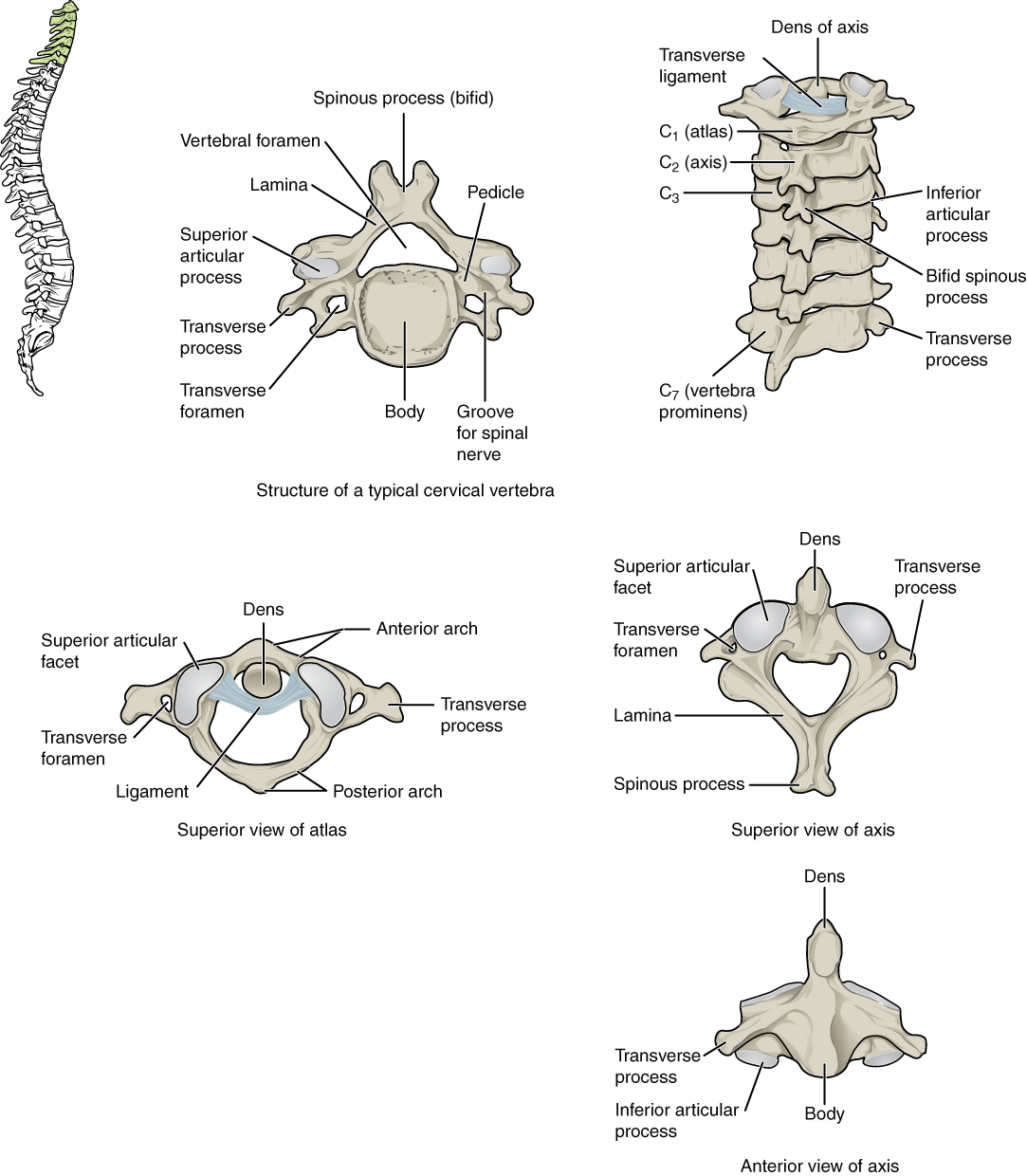