The deep tendon reflexes (DTR), particularly the tricep, patellar, and Achilles reflexes, were initially described by Wilhelm Heinrich Erb and Carl Friedrich Otto Westphal in adjacent articles simultaneously published in 1875 in the German Archives for Psychiatry and Nervous Diseases.[1] Since then, the Achilles reflex test, also called the ankle jerk test, has remained an essential component of the lower extremity neurologic exam. It is a myotatic (deep tendon) reflex that can be elicited easily with a reflex hammer to assess the S1 nerve root of the lumbosacral plexus. As for all deep tendon reflexes, the Achilles reflex is then interpreted by grading the response using a 0 to 4 scale and comparing it to the contralateral limb and nearby reflexes.[2][3]

Examining the DTRs such as the Achilles reflex provides insight into the function of the reflex arc and its' symmetry or lack thereof when compared to the contralateral side. Deep tendon reflexes remain an essential component of the neurologic exam that can guide further clinical decisions and differentiate between upper motor neuron and lower motor neuron pathology.[2][4][5]

The Achilles tendon can be palpated just superior to the posterior aspect of the calcaneus. The strongest and largest tendon in the human body attaches the triceps surae (soleus and gastrocnemius) muscle to the calcaneal tuberosity.[6][7] The tendon is covered by a paratenon and not a tendon sheath. A paratenon is a thin fascial covering that decreases friction while serving as a conduit for blood vessels.[6][7]

The Achilles tendon is innervated primarily by the S1 and S2 nerve roots of the tibial nerve.[7] The Achilles tendon reflex is a stretch reflex, which refers to the involuntary contraction of a muscle in response to passive stretching—tapping the tendon with a reflex hammer, a subsequent lengthening (stretch) in the triceps surae muscle, causing the muscle spindle's stretch receptors to be activated and propagate an excitatory stimulus. The stimulus is then carried by the Ia afferent neurons to the spinal cord, specifically to the cell bodies of the afferent neurons in the dorsal root ganglion.[4]

The afferent neurons then synapse on and activate an alpha motor neuron in the ventral horn of the spinal cord. The activated alpha motor neuron then transmits an efferent stimulus back to the neuromuscular junction of the agonist (triceps surae) muscle leading to a muscular contraction (reflex).[4] To ensure that the agonist muscle (triceps surae) of the reflex has an unopposed contraction, the Ia afferent neurons simultaneously stimulate an inhibitory neuron in the spinal cord that prevents the contraction of the antagonist (tibialis anterior) muscle.[8]

Although spinal reflex arcs bypass the brain to provide a quick response, the descending corticospinal tracts dampen and refine the amplitude of the reflex arc.[4] The S1 nerve root serves as the conduit for both the afferent and efferent impulses of the Achilles tendon reflex arc.

The deep tendon reflex arc is divided into the upper motor neuron (UMN) component and the lower motor neuron (LMN) component. The UMN component consists of the descending structures that transmit the dampening stimulus to the LMN at the ventral horn, such as the corticospinal tracts, brainstem, internal capsule, and cerebral cortex.[4] The LMN structures are the ventral (anterior) horn of the spinal cord and the peripheral nerve that innervates the muscle. The LMN of the Achilles reflex consists of the ventral horn of the S1 nerve root and the tibial nerve.

The Achilles reflex test is performed as part of any complete physical exam, particularly when assessing the neurologic functions of the lower extremities. When the pathology of the S1 nerve root is in question, the Achilles reflex test is the initial assessment of choice. It can aid in differentiating UMN pathology from LMN pathology as well as help in localizing the lesion.[4] Additionally, it can provide information on peripheral nerve function, which can be of utmost importance in certain patient populations, such as those with diabetes mellitus and hypothyroidism.[9][10][11]

Generally, there are no contraindications to performing the Achilles reflex test; however, one may have to defer the test in cases of injury. These injuries could be secondary to trauma or any underlying disorders that make the procedure difficult for the examiner to perform and the patient to sustain. Other possible contraindications are skin disorders. For instance, if a patient has advanced psoriasis of the overlying skin, it could be uncomfortable for the patient to undergo this procedure.

The Achilles reflex can be elicited using reflex hammers. Modern-day reflex hammers are available in four styles: Taylor hammer, Queen Square hammer, Babinski hammer, and the Troemner hammer. However, no study has shown any hammer to be superior to the next; selection is based purely on preference and tradition of the institution. A practitioner holds a standard reflex hammer by the handle in a firm manner, typically with their dominant thumb and forefinger holding most of the weight with the flat part of the top toward the patient’s Achilles tendon area. Other, larger, and more advanced reflex hammers, like a pendulum hammer, can also be used to assess the Achilles reflex.[12]

Any healthcare professional who has had training may perform the procedure, including nurse practitioners, physician associates, and doctors.

There is minimal preparation needed to complete the Achilles reflex test. The patient should be relaxed, lying on an examination table, and their Achilles tendon area well exposed from the superior calf to the plantar aspect of the foot. The practitioner should have washed hands, reflex hammer in hand, and should be in the position to perform the exam.[12]

There are various ways to perform an Achilles reflex test.[12] The traditional approach elicits the reflex with a "tendon tap," where the examiner strikes the Achilles tendon.[13] The conventional "tendon tap" can be performed with the patient in a supine position, knee flexed, and hip externally rotated on the examination table. One hand is slightly dorsiflexing the foot from the plantar aspect, as the other hand strikes the Achilles tendon with the reflex hammer. This approach can also be performed with the leg dangling off the examination table or with the leg elevated and held up by the examiner.[12]

The plantar strike is an alternative method of assessing the Achilles tendon reflex that may be of use, particularly for hospitalized patients with limited mobility. A plantar strike allows the examiner to assess the reflex while the patient remains supine with extended legs. The plantar strike method is performed by tapping the examiner's fingers on the patient's forefoot with slight tension causing dorsiflexion. A plantarflexion reflex should then be observed. The "plantar tap" has been shown to have 89% concordance with the traditional Achilles "tendon tap," regardless of the examiner's experience level.[13] Furthermore, it has been shown that the plantar strike or the Achilles tendon strike with an elevated leg provides the most reliable results when examining elderly patients, as it is commonly difficult to elicit in this patient population.[12]

A pendulum hammer can also elicit the Achilles reflex in a standing patient.[14] Examing a standing patient allows for the assessment of the reflex arc during postural control, as it is known that reflex excitability varies during functional motor commands.[15] Reflex arc assessment during the muscular engagement, such as when standing, allows for assessing the entire spinal reflex arc.[14] However, it is more commonly used in the research setting.

Occasionally, reinforcement of deep tendon reflexes can be performed to elicit a reflex that might not be observed otherwise in that patient. The Jendrassik maneuver is a commonly employed reinforcement technique in which the patient is asked to hook their hands together with flexed fingers while trying to pull apart as firmly as possible.[2][16] The use of the Jendrassik maneuver was shown to make the Achilles reflex appear in 70% of normal elderly patients with an absent reflex prior to reinforcement.[17]

As previously mentioned, the Achilles reflex test is interpreted and graded based on reflex amplitude using a scale such as the NINDS Myotatic Reflex Scale.[18] The NINDS scale uses a 0 to 4 grading system:

Additionally, a plus (+) or a minus (-) can be added to the number grade to identify an in-between grade response. A grading of 5 can also be used to denote a sustained clonus of >10 rhythmic oscillations after briskly stretching a hyperreflexic muscle, usually performed in the Achilles tendon.

When examining deep tendon reflexes, it is of utmost importance to compare each reflex response to the corresponding contralateral side. A numeric grading scale remains a subjective quantifier that depends on the examiner's preconceived idea of what a specific grade should be. However, the observation of an asymmetric reflex should be observed across all examiners regardless of their individual grade assignment. Hyporeflexia, hyperreflexia, and asymmetric responses are abnormal and should prompt further examination.[2]

Hyporeflexia is usually indicative of LMN disease, that is, of the peripheral nerve or the anterior (ventral) horn of the spinal cord for that particular level.[5] Disease or disruption of the LMN causes a diminished or absent reflex as the stimulus is not transmitted to the effector muscle. Additional features of LMN disease are the presence of flaccidity or diminished muscle tone, weakness, fasciculations, and muscular atrophy.[4]

The causes of LMN disease include acquired peripheral neuropathies, hereditary causes, or structural damage to the LMN.[19] Peripheral neuropathies are the most common cause of absent or diminished reflexes.[2] Physiologic derangements caused by diabetes mellitus, hypothyroidism, uremia, vitamin or electrolyte deficiencies, and toxins such as lead or arsenic can commonly present with hyporeflexia. Diminished or absent Achilles tendon reflex is commonly seen in patients with hypothyroidism or diabetes mellitus.[20][21] Furthermore, the absence of the Achilles tendon reflex has been shown to have 72.1% sensitivity and 90.6% specificity in identifying peripheral neuropathy in elderly patients.[21]

Medications such as isoniazid, vincristine, and diphenylhydantoin are also known to cause hyporeflexia. There are multiple hereditary and immune-related causes of hyporeflexia, including but not limited to spinobulbar muscular atrophy, spinal muscular atrophy, distal hereditary motor neuropathies, and Guillian-Barre syndrome.[19] Structural damage to the LMN components of the tibial nerve can occur with neural foraminal stenosis or a herniated intervertebral disc at the L5-S1 level that compresses the S1 nerve root.

Hyperreflexia is indicative of UMN disease. Damage to any UMN components (corticospinal tracts, brainstem, internal capsule, and cerebral cortex) leads to a hyperactive deep tendon reflex due to the disinhibition of the spinal reflex arc.[22] As previously described, the upper motor neurons are essential in dampening the reflex response. In addition to hyperreflexia, UMN lesions present with spasticity or increased muscle tone and weakness, as well as various pathological reflexes such as the Babinski sign, clonus, Hoffman sign, and radiation of reflexes to other muscle groups. Causes of UMN damage can be due to anoxic brain injury, brain trauma or spinal cord trauma, cerebrovascular accidents, neurodegenerative disorders (amyotrophic lateral sclerosis, primary lateral sclerosis, multiple sclerosis), spinal cord compression, or malignancy, to name a few.[5]

The Achilles tendon reflex is a simple maneuver that is part of any lower extremity neurologic exam. It can be performed relatively easily both in the clinic and inpatient environment. However, differences in technique and experience can lead to varying intra-patient results. Various case-control studies have been published that compare the traditional Achilles tendon tap to the plantar tap and the reproducibility across different experience levels (Level 3).[12][23][13]

The ubiquitous nature of the Achilles reflex test and its use by senior physicians, junior physicians, medical students, nurses, and physician assistants, necessitate a reliable confirmatory alternative. Considering the interdisciplinary structure of patient care teams with varying levels of experience, it is prudent to consider using the plantar tap method. Particularly for patient populations that you may suspect a diminished or altered reflex response, such as the elderly, diabetic, and hypothyroid patients. 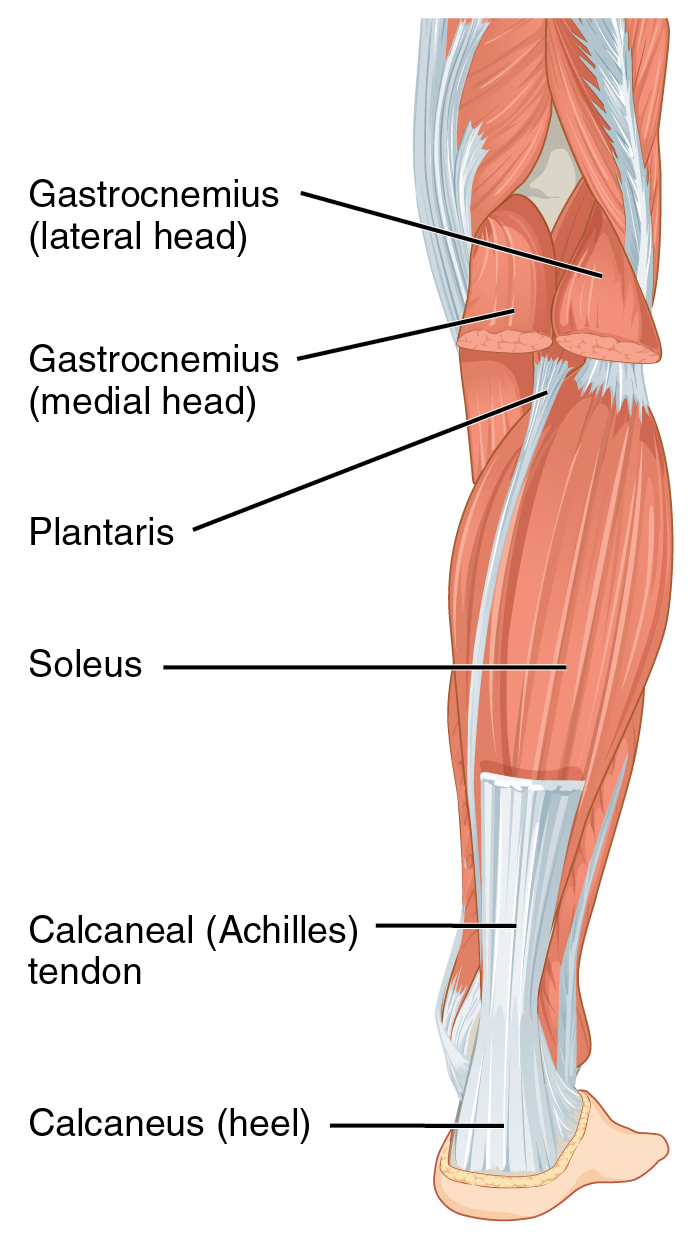 Illustration of the soleus, gastrocnemius, Achilles tendon and it's insertion onto the calcaneus.
Contributed by OpenStax College, 2017. (Creative Commons Attribution 3.0 license.)