Primary tracheal neoplasms are very uncommon but are usually malignant in adults and benign in children. They present with symptoms that mimic other conditions, so there is often diagnostic delay. By the time the diagnosis is certain, the cancer is in an advanced stage, which affects the prognosis. This activity describes the cause, pathophysiology, presentation, and diagnosis of tracheal cancer and highlights the role of the interprofessional team in its management.

Several factors play a role in missed and delayed diagnosis. First, non-specific symptoms like a cough, hemoptysis, dyspnea, and wheezes are also present in more common diseases like chronic obstructive pulmonary disease (COPD), asthma, bronchitis, or other infections. Second, the tracheal lumen is usually large with a significant reservoir, and symptoms of obstruction do not occur until the mass occupies more than 50 to 75% of the lumen diameter. Third, adenoid cystic cancer and other benign tumors grow slowly, and symptoms progress slowly over a period of months or years.

Bronchoscopy evaluation provides the opportunity for direct visualization of the mass and direct tissue biopsy. The use of endobronchial ultrasound allows for better evaluation of the extent of wall invasion and enables detection of paratracheal tumors invading the trachea.[7]

Surgical resection is the treatment of choice for malignant tracheal cancer whenever possible. Usually, this is followed by adjunctive therapy with radiation or chemotherapy. Proper surgical resection improves prognosis, symptoms, and quality of life. Five-year survival is 50% for patients treated with surgery, while it is only 10% in patients who are not surgical candidates. Several factors play a role before deciding surgical intervention, such as age, comorbidities, neck mobility, length of cancer extent, and degree of invasion.[8]

Surgical intervention is not the recommendation in patients with tumors involving more than 50% of the tracheal length because of the correlation with increased mortality. Other contraindications for surgery include respiratory failure, oral corticosteroid dependence, invasion of the heart or aorta, distant metastasis, the involvement of multiple lymph nodes groups, and previous radiation therapy with a high dose greater than50 Gy.[9][8]

The five-year survival of primary tracheal cancer in a large population-based registry was 27%. Adenoid cystic carcinomas carry a better prognosis than squamous cell carcinomas, with a significant difference in 5-year survival between both tumors (74% vs. 12%). The favorable prognosis for adenoid cystic carcinomas reflects the slower growth and a more prolonged natural history of this tumor. Early diagnosis and definitive surgical therapy before local or distant spread of cancer is associated with a favorable prognosis and increased survival. Five-year survival was 4%, 25%, and 47% in distant metastasis, regional disease, and localized cancers, respectively, in an extensive population-based registry.[2]

Complications related to the primary cancer growth and invasion of local organs include airway obstruction, dysphagia, and hoarseness. Postoperative complications include failed anastomotic healing, infections, cancer recurrence, and reduced quality of life, especially with resection of large segments of the trachea leading to a significant limitation in neck extension.

Primary tracheal carcinomas are rare and require a high index of suspicion for diagnosis, especially in the absence of response to treatment of other alternative diagnoses such as COPD, asthma, or infections. Squamous cell carcinoma and adenoid cystic carcinoma are the most common histopathological types. Computed tomography is the imaging modality of choice for diagnosis, and bronchoscopy provides the chance for direct visualization and biopsy of the mass. Surgery with complete resection of the tumor should be performed whenever possible as it correlates with increased 5-year survival. Adjunctive radiotherapy is helpful in most cases. In advanced unresectable diseases, radiation and bronchoscopic interventions such as stenting of the trachea serve as palliative therapy. Care is optimized by an interprofessional team including primary care, pulmonologist, radiologist, pathologist, thoracic surgeon, oncologist, and operating room nurses. [Level 5] 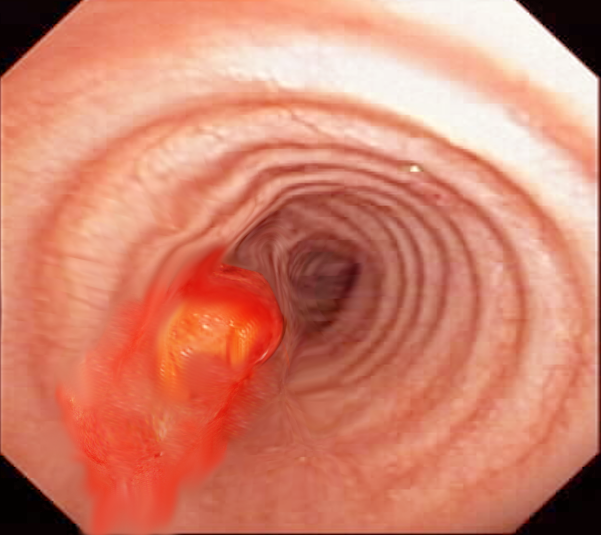