Tooth eruption is the movement of the tooth germ from its non-functional position in the alveolar processes to its final functional position in the oral cavity. The term eruption is different from the term emergence as the latter refers to the moment of appearance of any aspect of the cusp/crown through the gingival.  The term for the period until the appearance of the teeth in the oral cavity is the eruption time. It can be normal or delayed. Normal biologic eruption time is the tooth eruption that occurs when the root has formed approximately two-thirds of its final length. Delayed biologic eruption refers to delay in the eruption of the tooth despite the formation of two-third or more than two-thirds of the root.

The eruption is a continuous process that continues throughout life and does not stop on reaching the occlusal plane. In general, the tooth erupts when there is resorption of the overlying alveolar bone so that an eruption pathway forms, guided by anatomic structures, biological, chemical, and molecular mediators that result in the movement of the tooth through the eruption pathway.

The tooth eruption is a complex process which divides into five stages:

Eruptive movements occur when the tooth moves to its functional position in the arch from its intraosseous position. This phase further divides into intra-alveolar/intra-osseous and supra-alveolar eruption/mucosal penetration. The intraosseous eruption of the tooth begins immediately after the completion of crown formation. It involves the entire phase of the eruption of the tooth germ through bone. It mainly involves axial movements. The supra-osseous eruption consists of the tooth emerging into the oral cavity.

Preocclusal movements refer to the movement before the tooth reaches its functional occlusal position. Once the tooth has appeared in the oral cavity, it is subject to environmental factors such as the pressures of the buccal (cheeks), labial (lips) and tongue musculature, as well as the eruptive forces of adjacent teeth. These forces continue to act until the tooth reaches its final position in the dental arch. In the post-occlusal movements, the tooth remains in its functional position (tooth has reached the occlusal plane). It simultaneously adapts according to the growth of the jaw and compensatory movements caused by wear (proximal and occlusal).

There are several proposed theories for tooth eruption.

Root formation theory: According to this theory, the apically directed force by the proliferating root exerts a reactive occlusal force resulting in the coronal movement of the erupting tooth. However, it has been seen that the teeth without roots can erupt, and the teeth erupt even after completion of their root formation. Also, some teeth erupt to a distance greater than their total root length. Moreover, the newly formed dentin at the apex of the root is unmineralized and is vulnerable to trauma.

Bite forces theory: According to this theory, soft tissues of the dental follicle detect bite forces, which in turn directs bone remodeling and tooth eruption.[5]

Innervation-provoked pressure theory: This theory postulates that the innervation in the root membrane causes pressure in the apical aspect of the tooth resulting in tooth eruption.[6]

The equilibrium theory: According to this theory, once the tooth reaches its functional plane, further eruption occurs in response to the vertical growth of the lower jaw away from the maxilla. As the teeth get more space, it erupts occlusally to maintain occlusal contact with the tooth in the opposing arch.

Neuromuscular theory or unification theory: This theory states that the simultaneous and balanced forces of the orofacial muscles that are under the control of the central nervous system, are responsible for the active eruption of a tooth. The coordinated neuromuscular forces convert into electrical, electrochemical, and biomechanical energies to stimulate cellular and molecular actions within and around the dental follicle and enamel organ. This action prepares a pathway as well as other cellular functions for the eruption of a developing tooth.

Role of gubernacular cord: It is a structure composed of connective tissue that links the tooth follicle to the overlying gingiva, thus guiding the course of the tooth eruption.[7]

The age at which deciduous and permanent teeth erupt can vary extensively. The sequence of eruption is more significant than the timing, which may differ in both deciduous and permanent teeth. Generally, a variation of 6 months on either side of the usual eruption date is considered normal. The first teeth to erupt in the oral cavity are the deciduous mandibular central incisors at approximately 5 to 8 months of age, followed by maxillary central incisors a month or two later. In general, by the age of 19 months, the child has a total of 12 erupted deciduous teeth. By 23 months, children should have 16 deciduous teeth, and by 27 months, all the deciduous teeth should have erupted.

The muscle of the cheeks, lips, and tongue play an active role in the pre-occlusal phase of tooth eruption. These forces continue to influence the eruption until the tooth reaches its final functional position in the dental arch, i.e. the occlusal plane.

Role of muscles on eruption from abnormal habits

Digit sucking: This habit affects the eruption path of the maxillary incisors resulting in their protrusion due to the disturbance in the balance existing between the outward force of the tongue musculature on the palate and the inward force of the cheek musculature.[8]

Tongue thrust: In children with tongue thrust habit, greater outward force by the tongue musculature is applied, resulting in a change in the eruption pathway of maxillary incisors.[9]

Lip habit:  Sucking or biting of the lips, particularly the lower lip, results in greater inward pressure by the lip musculature, which in turn leads to change in the eruption path of the mandibular incisors.[10]

Variations in the form of ectopic eruptions, premature eruptions, and delayed eruptions may occur. These are basically deviations from the typical sequence of eruption and/or position of teeth in the arch.

Ectopic eruption: When the tooth erupts in an abnormal position, the condition is known as an ectopic eruption. Variation in position has been shown to be influenced by various factors such as race, sex, and individual factors. Transposition is the shifting of the location of the tooth in the dental arch. Local traumatic injury may displace one or more tooth buds resulting in an ectopic eruption of the affected teeth. Other local factors include the presence of fibrous tissue, supernumerary teeth, arch length deficiency, retained or prematurely lost deciduous teeth. Reports also exist of nasal teeth which are teeth that appear into the nasal cavity or on the palate as extra teeth

Delayed eruption: When the tooth erupts in a normal position, but its timing of eruption delays from the usual, the condition is known as a delayed eruption. It may occur due to the effect of local factors (mucosal barrier, gingival fibromatosis, odontogenic and non-odontogenic tumors, premature loss of a primary tooth, radiation damage), systemic conditions, endocrinal disorders (hypothyroidism, hypopituitarism, and hypoparathyroidism) of the mother and medications. Long-term chemotherapy or drugs (aspirin, acetaminophen, ibuprofen, indomethacin, bisphosphonates) may inhibit the prostaglandins pathway resulting in decreased osteoclastic activity in periodontal tissues, thus, slowing down the rate of eruption. Chronic and prolonged malnutrition (Vitamin deficiencies) during childhood also correlates with delayed eruption. Various syndromes such as Down syndrome, Turner syndrome, Gardner syndrome, Cleidocranial dysostosis, Anhidrotic ectodermal dysplasia, Hutchinson–Gilford syndrome, Bloch–Sulzberger, Apert syndrome, Axenfeld–Rieger Syndrome have been shown to cause delayed eruption.

Premature eruption: This refers to the eruption of the tooth/teeth before its stipulated time in the oral cavity. Teeth present in the oral cavity at the time of birth are referred to as natal teeth, whereas the teeth erupted within the first month of life are referred to as neonatal teeth.[11] The prevalence of natal teeth is three times more than neonatal teeth.  They occur most commonly in the mandibular anterior area, particularly the central incisors followed by maxillary incisors, mandibular canines or molars, and maxillary canines or molars. Premature eruption could be due to several factors such as genetic, endocrine disturbance (pituitary, thyroid, and gonads), congenital syphilis, local factors (excessive resorption of the overlying bone), environmental factors (environmental pollutants such as toxic polyhalogenated aromatic hydrocarbons, Polychlorinated biphenyls, polychlorinated dibenzodioxins, and dibenzofurans), poor maternal health, and febrile episodes during pregnancy. Some syndromes are also reported to be associated with natal teeth and neonatal teeth such as Chondroectodermal dysplasia, Rubinstein-taybi, Pierre-robin, Neonatal progeria, cleft lip and palate, ectodermal dysplasia, craniofacial dysostosis, and Down’s syndrome.

Intraosseous Ectopic Migration of Unerupted Teeth: It is a rare occurrence reported in less than 1% of the population with an increased predilection for females and the mandibular arch. It usually involves the mandibular second premolar or the mandibular canine.[12][13]

Impacted Teeth: These teeth cannot erupt due to a physical barrier preventing their eruption. Mandibular third molars are the most commonly impacted teeth.

Embedded teeth: These are teeth with no physical obstruction in their path but remain unerupted due to la ack of eruptive force.

Submerged teeth: These are the teeth, which, after eruption, have lost their ability to maintain the continuous eruptive potential as the jaws grow.

Tooth eruption is a very complex and finely regulated process that influences the healthy development of the craniofacial region. All the factors such as eruption timing, sequence, direction, rate, position, and morphology of teeth are crucial for facial esthetics and phonetics. [14] The eruption of the deciduous teeth is not only significant for maintaining the facial contour, mastication, phonetics, and esthetics, but also they guide the deciduous teeth into their proper position. Estimation of the eruption schedule is a valuable tool in planning a child’s dental health that includes diagnostic, preventive, and therapeutic measures.[15] It is also a key indicator during the diagnosis of certain growth disturbances, and to estimate the chronological age of the child with unknown birth records in forensic dentistry.[16] Moreover, it can also act as an aid in interceptive guidance of occlusion, especially when determining the timing of eventual extractions of deciduous teeth and timing of orthodontic treatment.[17]

Eruption hematoma: An eruption hematoma over an erupting tooth that presents as a bluish swelling due to filling of blood-tinged fluid in the follicle surrounding the erupting tooth is usually asymptomatic. They typically rupture spontaneously without any treatment. But sometimes, the size of the hematoma may cause pain and impair eating.

Natal/neonatal teeth: They may lead to ulceration on the ventral surface of the tongue due to the sharp incisal edge of the tooth. This condition is known as Riga-Fede disease/syndrome. As the root development of these teeth is incomplete, they are mobile, which increases the possibility of swallowing and aspiration of the teeth. Other complications include injury to the mother’s breast and difficulty in suckling. The mobility has also shown to cause degeneration of Hertwig’s epithelial sheath that is responsible for the formation of the root. Degeneration of the sheath results in further incomplete root development.

Ectopically erupted teeth such as nasal teeth may be asymptomatic or may lead to facial pain, obstruction of the nasal cavity, headache, epistaxis (acute hemorrhage from the nostril), foul-smelling rhinorrhea, external nasal deformities, and obstruction of the nasolacrimal duct. Ankylosed teeth interfere with the development of the alveolus in the vertical direction. 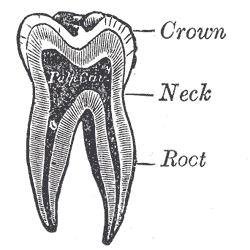 Marks SC Jr,Cahill DR, Experimental study in the dog of the non-active role of the tooth in the eruptive process. Archives of oral biology. 1984;     [PubMed PMID: 6586126]

Kjær I, Mechanism of human tooth eruption: review article including a new theory for future studies on the eruption process. Scientifica. 2014;     [PubMed PMID: 24688798]