The Thebesian veins/vessels were first studied by French anatomist Raymond Vieussens and German anatomist Adam Christian Thebesius, from whom they derive their name, who both described the vascular network in their research of the coronary circulation.[2] These vessels are also known as the "venae cordis minimae" as they are the smallest of the coronary veins behind the great, middle, and small coronary veins.[2] The Thebesian vessels are unique to the cardiac circulation and help to drain the blood supply of the myocardium through a direct connection between the atrial and ventricular chamber lumina and the larger coronary vessels on the epicardial surface.[2]

The Thebesian vessels or veins are embedded in the walls of the heart itself. They serve to drain the myocardium and are present in all four heart chambers. They are more abundant on the right side of the heart and, more specifically, are most abundant in the right atrium.[3][4][5] The coronary arteries run in the epicardium and give off small arterioles that then supply the myocardium. Most of the arterioles connect with the main coronary venous circulation through a capillary network within the myocardial layer of the heart. [1] Collectively, this second network is called the lesser cardiac venous system made up of the Thebesian vessels (veins).[1] In addition to the more traditional capillary network system, there is also another vascular network that contains vessels and endothelial-lined sinusoids within the myocardium, and these vessels and sinusoids connect to the traditional capillary systems and drain directly into the heart chamber lumen itself. These should not be called Thebesian vessels. They are more properly termed "vessel of Wearn."[6]

These vessels are unique to the cardiac circulation, providing an alternative route of nourishment and drainage of the myocardium and contributing to the right to left physiologic shunting of the body's circulation.[4][7] This lesser system can contribute up to 30% of the venous drainage of the heart.[1]

The Thebesian veins usually measure approximately 0.5 mm in diameter.[1] Histologically, like the other veins of the body, the wall of the Thebesian veins consists of the tunica intima, tunica media, and tunica adventitia, three layers comprising the venous wall. The tunica intima consists of an endothelial layer with minimal connective tissue. The tunica media is a fibrous layer composed of smooth muscle layers and collagen fibers. In veins, as opposed to arteries, the muscle layer is thinner, and the collagen fibers make up a more significant proportion of the tunica media. The tunica adventitia is the thickest layer in veins and is composed of mostly connective tissue.

The main coronary vasculature develops from cells migrating from the dorsal mesocardium to the surface of the myocardium in the epicardial layer. The development of the Thebesian vessels has not been the subject of extensive research, but they seem to have a different origin from the main coronary venous system. Researchers have postulated various theories as to their origin; for example, that these veins evolve from the intertrabecular network of the embryonic circulation, which is initially separate from the main venous circulation. This network then grows out to the epicardial surface and connects with the greater cardiac venous system later on in development.[2]

The specific innervation of the Thebesian veins has not been to the object of many studies, but the assumption is that these veins have the same smooth muscle innervation as the other veins of the heart. The muscle layers in the tunica media of the vein wall will relax or contract, changing the caliber of the vessel lumen according to parasympathetic or sympathetic input, respectively.

The use of retrograde cardioplegia for myocardial protection through the coronary sinus for procedures requiring cardiac bypass has limitations due to shunting through the Thebesian veins. The right ventricle and the posterior left ventricle do not receive enough flow when using this solution. Therefore, different modes of administration of retrograde cardioplegia have been developed and implemented to reduce the shunt flow.[8][9][10]

Also, transmyocardial laser revascularization (TMLR) is a procedure for poor surgical candidates for coronary artery bypass grafting. TMLR involves the creation of channels in the left ventricular wall, providing a direct connection between the lumen of the chamber and the myocardial muscle to improve oxygen flow to myocardial tissue in advanced coronary artery disease.[11] This technique employs a similar concept to that of the function of the Thebesian vessels, which provide a direct connection between the blood supply of the myocardium and the heart chambers themselves, thereby contributing to tissue perfusion.[12]

The Thebesian vessels appear to have two main roles. First, the Thebesian vessels help to provide an additional route for perfusion and drainage of the myocardium.[2][4] Adequate perfusion of the heart muscle is essential for the function and perfusion of the rest of the body's tissues. The heart tissue has the highest percentage of oxygen extraction of any body tissue, further stressing the importance of maintaining sufficient blood flow. Furthermore, ischemic heart disease is the primary cause of death worldwide. The Thebesian vessels play an important role in myocardial perfusion, transporting oxygen and nutrients into the tissue and carbon dioxide and waste away from the tissue and back into the general circulation. Second, the Thebesian veins help contribute to the right to left physiologic shunting of the circulation.[4][13] 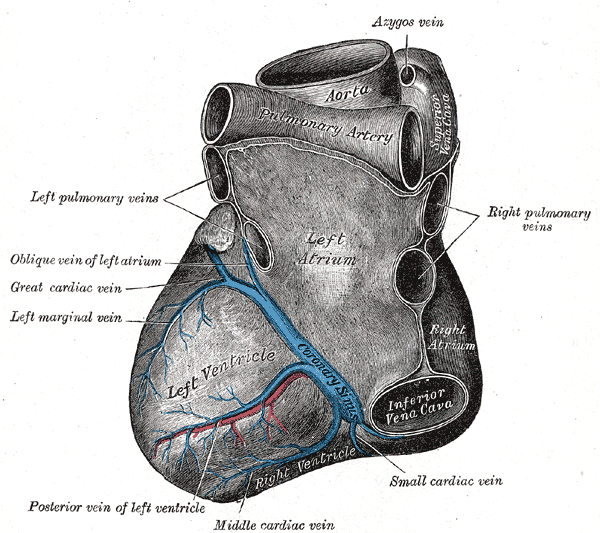