Talocalcaneal coalition or peroneal spastic foot or subtalar coalition is an anomalous connection between the talus and the calcaneum that can present with painful and rigid flat-foot in older children and adolescents. The talocalcaneal coalition is part of a spectrum of tarsal coalitions that causes rigid flat foot. The talocalcaneal coalition can be fibrous, cartilaginous, or bony. Although the anomaly is present at birth, it becomes symptomatic only when the abnormal fibrous connection matures into a stiff cartilaginous bar, which later ossifies to become a rigid bar. This activity will discuss the epidemiology, the pathophysiology, evaluation, and management of the condition, and also highlights the critical role of the an interprofessional team in managing this complex problem.

It is known as peroneal spastic flat-foot as the peroneal muscles are in spasm in a painful, rigid flat foot. As it affects the subtalar joint, it is also commonly known as the subtalar coalition.

The subtalar joint has three facets: anterior, middle, and posterior, which articulates with the respective facets of the calcaneum. The middle facet being is most commonly involved in the talocalcaneal coalition. The posterior facet is the largest, and the anterior facet is the smallest. There are four recognized anatomical patterns of the anterior and middle facets- a single small middle facet, a large middle facet that extends posteriorly, a middle facet that extends anteriorly, and both the facets-middle and anterior in the medial compartment. The size of the talocalcaneal coalition determines the successful outcome after its resection.

The Talocalcaneal coalition is the second most common tarsal coalition in the foot after the calcaneonavicular coalition. Tarsal coalitions cause gradual flattening of the medial longitudinal arch resulting in a flat foot and stiffness of the subtalar joint.[1]

Archaeological evidence points to the presence of the tarsal coalitions in the Mayan and the pre-Columbian Indian civilization. Zuckerkandl described the anatomy of a talocalcaneal coalition in 1877. Slomann (1921), Badgeley (1927), and Harris and Beath (1948) associated the tarsal coalitions causing peroneal spastic feet.[2]

There are two types- the congenital and the acquired type. In the most common congenital type, talocalcaneal coalitions are due to the failure of mesenchymal segmentation and differentiation.[3] Most of them are autosomal dominant with variable penetrance. These are initially fibrous, which may undergo metaplasia to cartilage or bone.

The acquired type is less common and can be due to trauma, degeneration, inflammatory arthritis, or infections of the hindfoot or midfoot.

In a normal gait, the subtalar joint is a pronating and supinating joint. When the foot is in the stance phase, the leg normally internally rotates, and in the toe-off phase, the leg externally rotates due to the closed chain movement. In a subtalar coalition, this unique miter torque converter movement gets lost, leading to increased stress on the neighboring joints especially the ankle joint and talonavicular joints leading to ligamentous laxity in the ankle joint and beaking at the talar neck leading to traction spurs. A primary impingement caused by the presence of an accessory facet in a pediatric or young adult rigid flatfoot deformity may cause peroneal spasm.[5]

Most coalitions are not symptomatic. The typical symptomatic presentation is of an adolescent with repeated ankle sprains and pain. Pain onset is either insidious or sudden when associated with an ankle sprain. The pain is usually aggravated by running, jumping, or prolonged standing and typically relieved by rest. Pain can be localized distal to medial malleolus at the site of the coalition, ankle joint, talonavicular joint, sinus tarsi, medially under the head of the plantarflexed talus and laterally over the peroneal tendons.[4] The patient can have an associated calf pain due to tight gastrosoleus and peroneal spasm. As already alluded to, the pain depends on the stage of metaplasia of the coalition.

On inspection, the hindfoot is in valgus, forefoot abduction, varying degrees of medial longitudinal arch flattening. The arch does not reform on tiptoeing or on Jack's test. The patient is unable to stand on the lateral aspect of the foot. The subtalar movement becomes reduced (fibrous)or completely absent (osseous). The gastrosoleus complex is tight, and lack of subtalar movement leads to peroneal spasm on forced inversion. There is a double medial malleolus sign: prominence palpated inferior to the medial malleolus, which represents the enlarged medial facet.

Standing anteroposterior and lateral and Harris views are helpful. Radiographs of the ankle joint may demonstrate an apparent ball-and-socket ankle. On the lateral view, talar beaking occurs at the distal dorsal aspect of the talar head near the talonavicular joint, and this is due to abnormal biomechanical stresses at the talonavicular joint. Talar beaking is 48% sensitive and 91% specific for diagnosing a talocalcaneal coalition. The lateral radiographs reveal the C sign, which results from the bony continuity of the inferomedial border of the talus and the posteroinferior aspect of the sustentaculum tali. First described by Lateur et al., the C sign is 88% sensitive and 87% specific. On a true lateral radiograph, there is an absent middle facet sign which has a 100% sensitivity and 42% specificity. The sustentaculum tali is dysmorphic, and it appears enlarged and rounded (often referred to as the Drunken waiter sign) is 82% sensitive and 70% specific.[6]

CT scanning of 3 to 5 mm sized slice cuts are required to rule out other associated coalitions and also for preoperative workup. CT imaging is generally upfront in evaluating osseous subtalar coalitions but elusive in cases of a non-osseous coalition. CT scan is useful to determine the location, size, and extent of the coalition. The posterior facet of the calcaneum width and the relative cross-sectional area of the talocalcaneal coalition to the area of the posterior facet of the calcaneus is calculated to determine the surgical procedure and outcome. The talocalcaneal coalitions are resectable if the size ratio is less than 50%, there is a wide posterior articular facet, and under 16 degrees of hindfoot valgus deformity measured on the coronal CT image.[7]

Another useful classification system has been proposed based on the 3DCT reconstructions, which may help in defining the size, location, and orientation of talocalcaneal coalitions.

CT SPECT scan can be used to localize the precise location of the symptoms.

MRI scanning is useful to rule out fibrous or cartilaginous coalitions and to also to look for any inflammatory changes in the neighboring tendons.

The goal of conservative therapy is to alleviate the discomfort associated with the coalition. Patients with mild to moderate symptoms may respond well to shoe modifications. Medial arch supports and custom molded orthotics that can help control motion or prevent motion of the painful subtalar joint and reduce the medial-lateral hindfoot force can be used to minimize pain.

Pain-relieving measures include anti-inflammatory medications, and injection of steroids into the coalition site can combine with complete immobilization in a below-knee cast. In severe pain, six weeks of complete immobilization may be justified with symptomatic relief obtained in roughly 30% of patients. The patient can recommence activities if symptoms resolve with conservative measures. Symptoms often subside when the facet ossifies, especially if the heel is in a neutral position.

If conservative measures fail, the patient should undergo re-evaluation for surgical intervention. The surgical procedure is necessary when the (1) pain is not relieved and (2) if the non-operative management fails to resolve the recurrent ankle sprains.

1. Resection of the coalition is the treatment of choice if the patient is less than 16 years of age. The results are less predictable than the resection of calcaneonavicular coalitions. Resection site is usually interposed by fat or wax to prevent a recurrence. If there is a mild hindfoot deformity, a sinus tarsi implant is an option, or a corrective calcaneal lengthening or medial calcaneal shift osteotomy is used to correct the foot deformity.

According to Wilde et al., there are three criteria for the resection to be successful.

A recent review article by Mubarak and Murphy advocated the restoration of hindfoot motion regardless of the size of the coalition[9]. The resection may be accompanied by calf lengthening or peroneal lengthening if indicated. One must remember that the most common cause of failure in the surgical management of talocalcaneal coalitions is incomplete resection.

2. Subtalar fusion is necessary if the area of the talonavicular coalition is greater than the 50%

The talonavicular coalition requires differentiation from:

The conundrum with the talocalcaneal coalition is that the patients do not manifest with symptoms until they reach 12 to 15 years of age. Flexible flat foot is common in children, and in most children, the reconstitution of the medial longitudinal arch occurs with age. The majority of patients (75%) are asymptomatic, and no treatment is necessary. The minority few who have rigid symptomatic flat feet require assessment and investigated early to diagnose talocalcaneal coalition as an earlier diagnosis can have better outcomes. The spectrum of symptoms depends on the degree of ossification, i.e., the metaplasia of the fibrous coalition into osseous synostosis. More commonly, the patients are often diagnosed late, negating a successful early intervention.

In a neglected symptomatic talocalcaneal coalition, the natural progression would be a stiff subtalar joint with a hindfoot valgus affecting the gait mechanism and leading to pain and recurrent ankle sprains and leading to degeneration in the ankle, Choparts, and the forefoot joints.

PROMs after surgical excision of a tarsal coalition reveal that over 70% of patients' activities are not subject to restriction from pain, and their functional outcome is good.[10]

Talocalcaneal coalitions are asymptomatic in three-quarters of the population. As quoted by D.H. Lawrence, “What the eye doesn't see, and the mind doesn't know, doesn't exist.” The diagnosis of talocalcaneal coalitions poses a dilemma. The screening of the tarsal coalition is best done in the primary care set up and referred to a specialist orthopedic surgeon or the physiotherapist for further patient workup. Diagnosis and management require the efforts of a collaborative interprofessional team

Even symptomatic patients can have successful management with orthotics, physiotherapy, and analgesia. Conservative treatment of talocalcaneal coalition requires an interprofessional approach in conjunction with the physiotherapists, orthotics. Patient and parent education, combined with imparting realistic information and expectations from the management, is crucial for a successful outcome. A proper history and clinical examination supplemented by radiographs, CT, or 3D CT, MRI scanning are essential for diagnosing the condition and planning for future surgical intervention. The radiologist plays a vital role in helping out the surgical planning by calculating the size and the area of the coalition. Orthopedic specialty nursing staff can prove extremely helpful, assisting in procedures, answering patient questions, providing a bridge between therapists and the managing clinician, and offering patient counsel. Various operative procedures have been advocated based on the size, shape, and relation of the hindfoot valgus, and these complex operative decisions and performing these procedures is best when at expert centers equipped to deal with these problems.

In conclusion, the interprofessional approach to talocalcaneal coalitions is most appropriate for its management. [Level V] 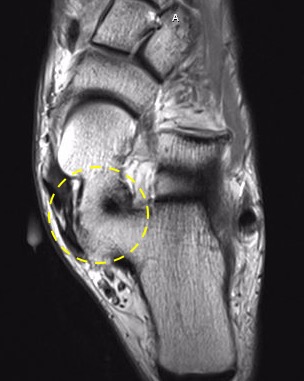 Leonard MA, The inheritance of tarsal coalition and its relationship to spastic flat foot. The Journal of bone and joint surgery. British volume. 1974 Aug;     [PubMed PMID: 4421359]