The suprachiasmatic nucleus (SCN) is a bilateral structure located in the anterior part of the hypothalamus. It is the central pacemaker of the circadian timing system and regulates most circadian rhythms in the body.[1] Multiple afferent neuronal tracts project to the SCN. Its major tract is the retinohypothalamic tract originating from photosensitive ganglion cells of the retina. Efferent projections from the suprachiasmatic nucleus innervate structures such as the pineal gland, producing melatonin during the night for induction of sleep. Disruptions in the SCN circadian system have been found to correlate with various mood disorders and sleep disorders, detailed in this article.

The suprachiasmatic nucleus consists of two nuclei comprised of approximately 10000 neurons located on each side of the third ventricle, directly above the optic chiasm. The SCN divides into "core" and "shell" subregions, with vasoactive intestinal peptide (VIP) and gastrin-releasing peptide (GRP) in the retino-recipient core and arginine vasopressin (AVP)-expressing cells in the shell.[1] The expression and location of VIP, GRP, and AVP-containing neurons of the core and shell, respectively, have been demonstrated consistently across many mammalian species, suggesting how important these neuropeptides are to maintaining circadian rhythm.[2]

In the core subregion, VIP increases during the dark period, whereas GRP increases during the light period and is specifically activated by direct inputs from photosensitive ganglion cells in the retina via the retinohypothalamic tract (RHT).[1] In animal studies, GRP levels increase during the morning and peak around midday. VIP and its receptor, VPAC2, form the key signaling pathway in the SCN that controls daily circadian rhythms and maintains the suprachiasmatic nucleus' internal synchronization. The "shell" subregion's AVP neurons project to the paraventricular nucleus (PVN), coordinating circadian feeding rhythms and helping to coordinate feeding times with the circadian rhythm.[3] AVP neurons also project to thirst-controlling neurons in the organum vasculosum lamina terminalis (OVLT). Gizowski and colleagues discovered that mice increase their water intake before sleep, correlating with the increase in the electrical activity of the AVP neurons to the OVLT during this period.[4]

The suprachiasmatic nucleus is one of many nuclei of the hypothalamus. During the early embryonic development of the nervous system, the prosencephalon or forebrain differentiates into the diencephalon and telencephalon. Originating from the ventral part of the diencephalon, the hypothalamus subdivides into four rostrocaudal segments: the preoptic, anterior, tuberal, and mammillary segments. Each region three mediolateral zones, known as the lateral, medial, and periventricular zones.[5] The suprachiasmatic nucleus' anatomic location is in the anterior region of the hypothalamus.

The RHT receives direct inputs from photosensitive ganglion cells in the retina. By secreting glutamate into the core VIP regions of the suprachiasmatic nucleus, the RHT mediates the photic regulation of circadian rhythmicity.[9] Another neurotransmitter, pituitary adenylate cyclase-activating polypeptide (PACAP), is also found in retinal ganglion cells and helps relay information about light while potentiating glutamate’s action on the SCN. The GHT provides a secondary, indirect photic input that is mediated by both photic and non-photic stimuli such as a motor or behavioral activity.[9] Within the suprachiasmatic nucleus, the GHT and the RHT partial overlap in their innervation. Neurotransmitters involved in the GHT include neuropeptide Y (NPY), GABA, and enkephalin (ENK). NPY is the GHT's primary neurotransmitter, acting directly on pacemaker neurons of the SCN. NPY also acts presynaptically to inhibit GABA-mediated transmission to the SCN. Recent studies have shown that GABA has dual effects on the SCN neurons that are excitatory by day and inhibitory by night.[10] GABA’s nighttime excitatory effect remains poorly understood but is thought to stem from the depolarization of SCN neurons.

The median raphe nuclei from the midbrain release serotonin neurotransmitters to retinorecipient regions of the suprachiasmatic nucleus, specifically its VIP-containing regions. The primary role of the median raphe nuclei is to modulate pacemaker responses to light within the SCN. During the daytime, serotonin activates the circadian pacemaker by potentiating glutamate input, then at nighttime inhibits this input. Serotonin regulates SCN neurons by both presynaptic and postsynaptic mechanisms.[9]

Other afferent projections to the suprachiasmatic nucleus arise from the pedunculopontine, parabigeminal, and laterodorsal tegmentum nuclei. These projections carry cholinergic neurotransmitters to the SCN.[11]

The major polysynaptic efferents of suprachiasmatic nucleus neurons project to the pineal gland. During the night, these fibers release norepinephrine and stimulate postsynaptic beta-1 and alpha-1 adrenergic receptors on pinealocytes, triggering the production of melatonin. Melatonin serves as a humoral signal that varies in intensity as the nights lengthen then shorten throughout the year. Melatonin production is thereby prolonged in the winter season when nights are longer, as compared to the summer season when melatonin production shortens.[12]

As the master oscillator, the suprachiasmatic nucleus uses humoral and neuronal inputs to coordinate peripheral circadian clocks. Peripheral organs including the lung, liver, kidney, heart, and muscle all produce circadian gene expression based on the combination of photic input to the SCN and non-photic input such as the timing of food intake or motor activity.[12] The major neurotransmitters involved in SCN efferent projections are AVP and VIP.

The neurotransmitters involved in the suprachiasmatic nucleus' circadian activity also affect other seasonal processes. In the winter, melatonin rhythms are delayed by approximately 90 minutes compared with those of the summer. Levels of serotonin (5-HT) peak between October and November before declining again and reaching a nadir between December and January. Reductions in 5-HT concentrations during the winter months coincide with an increased prevalence of seasonal affective disorder during this period. Rodent studies have shown that changes in 5-HT production from the midbrain raphe nuclei affect circadian behavior and neuroendocrine rhythms. In the early autumn months of August to October, the number of vasopressin-containing and VIP-containing neurons is significantly higher than in the late spring months of April to June.

Increasing disruption of the sleep-wake cycle is an expected phenomenon of normal aging. Approximately 40 to 70% of elders experience chronic sleep disturbances. Nakamura and colleagues conducted in vivo studies of aging mice and found reduced-amplitude electrical activity from the SCN as well as decreased neuronal efferent projections from the SCN to the subparaventricular zone of the hypothalamus.[13] Treating disrupted circadian rhythms at the suprachiasmatic nucleus level can potentially ameliorate the nighttime sleep disturbances and daytime fatigue that older adults sometimes report.

Detailed knowledge of the suprachiasmatic nucleus' afferent and efferent projections and its respective neurotransmitters is essential for understanding the mechanisms of the master circadian clock, and for suggesting intervention targets to address circadian rhythm sleep disorders. Designing effective pharmaceutical interventions depends upon many factors that include multiple components of drug absorption, metabolism, excretion, and chronopharmacology; optimal drug doses may vary depending on when administration occurs within the circadian cycle.

Approximately 50 to 70 million adults in the United States live with chronic sleep disorders that have adverse effects on their health and quality of life. The International Classification of Sleep Disorders (ICSD-3), published by the American Academy of Sleep Medicine (AASM), classified more than 80 distinct sleep disorders.[12] Two of the more common circadian rhythm sleep disorders affect the advanced sleep phase (ASP) and the delayed sleep phase (DSP). In ASP disorders, people have normal initiation of sleep but wake up several hours earlier than average, usually between 2:00 AM and 5:00 AM. According to the AASM, ASP disorders affect approximately 1% of middle-aged and elderly Americans. People with DSP disorders often get to sleep past midnight then wake up in the late morning or afternoon. DSP disorders have a reported prevalence of 7-16% among adolescents and young adults. The AASM reports that about 40% of people with DSP disorder also have a family history of this disorder.[12]

In irregular sleep-wake rhythm (ISWR) disorder, the sleep-wake cycle loses its normal circadian rhythm. ISWR disorder is often associated with intellectual disability in children and dementia in elders with risk factors that include comorbid psychiatric and medical illnesses.[15] The etiology of ISWR is unknown but is thought to be related to structural damage to the SCN, the master circadian pacemaker. People with Alzheimer dementia may be subjected to reduced daytime light exposure if they stay indoors most of the day. Their nocturnal melatonin levels are reduced while their daytime melatonin levels are elevated. Decreased melatonin production at night results in a greater expression of SCN-generated arousal and wakefulness at night.[15] Surprisingly, exogenous melatonin has not been demonstrated to be effective in treating ISWR disorder. Mixed-modality treatment with increased daytime light exposure and daily walks showed statistically significant reductions in nighttime awakenings and increased total sleep time compared to those of control participants.[15] More research is needed to delineate effective treatment for ISWR disorder. 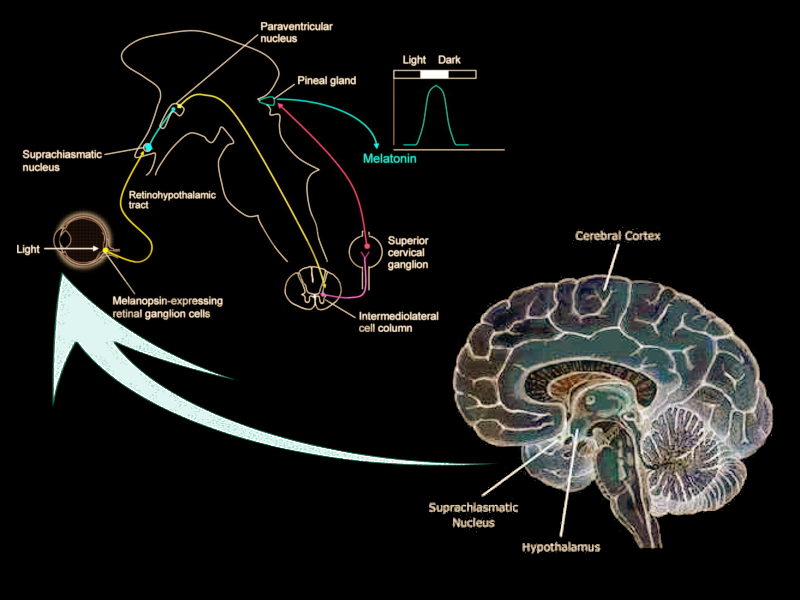