Stingray envenomations are common injuries. Practitioners should recognize that these injuries vary in level of severity, and clinical concerns should vary accordingly. The type of stingray involved and the anatomical region of injury affect the associated morbidity and, in some cases, mortality. Short-term management includes the removal of any retained barbs, wound care, and immersion of the injury in hot water to inactivate the toxin. This activity outlines the evaluation and treatment of stingray stings and reviews the role of the interprofessional team in the care of patients with this condition.

Stingrays are a subset of the cartilaginous fish commonly known as rays. Rays are members of the Chondrichthyes class, which also includes sharks and skates. All rays share a flat body with enlarged pectoral fins that permanently fuse to their heads. The mouth of a stingray is on the ventral side of the animal. The most dangerous aspect of the stingray is the tail due to the spinal blade, also known as its stinger or barb. Rays with longer spines located more distally on their tail represent the greatest danger for sting injuries.[1]

Stingrays can have between one and three spinal blades. The stinger is covered with rows of sharp spines made of vasodentin, a cartilaginous material that can easily cut through the skin. The stingray is unique from other venomous animals in that the venom storage is not in a gland. The venom is stored inside its own secretory cells within the grooves on the undersides of the spine. Freshwater stingrays have more secretory cells that cover a larger area along the blade. Because of this fact, freshwater stingrays have a venom that is more toxic than that of their saltwater relatives. The venom of the stingray has been relatively unstudied but is known to be heat-labile and cardiotoxic.[1][2]

Stingrays are very common throughout tropical marine waters and freshwaters. There are over 150 species of stingray worldwide, ranging in size from inches to 6.5 feet and in the larger species weighing as much as 800 pounds. Stingrays often feed in or near coral reefs, causing frequent human injuries. In the United States, there are approximately 750 to 2000 stingray injuries reported annually.[3] There are estimated thousands of cases per year in tropical regions with freshwater stingrays that occupy inland rivers.[3] In one retrospective review of 119 cases seen in a California emergency department over 8 years, 80% of stingray victims were male, with an average age of 28 years (range 9 to 68 years old).[4] In a prospective study of freshwater stingray injuries in Brazil, 80% to 90% of the injuries were in men.[5] The most common site of injury is the lower extremities, followed by the upper extremities.[4][5] The majority of stingray injuries have low morbidity, with higher rates of serious injuries and complications in freshwater stings compared to marine stings. In the United States and Indo-Pacific nations, fatalities related to stingray injuries occur one to two times a year, compared to fatality rates up to 8 per year in South American nations related to Amazonian stingrays.[3]

Stingrays are not known to be aggressive, nor are they known to act defensively. In fact, the primary defensive action of the stingray is simply to swim away from the area. However, when attacked by a predator or stepped on, the ray will use its tail to puncture and envenomate its potential attacker. Human injuries are most common on the extremities of swimmers and divers and those who accidentally step on a stingray. One way to prevent this is to slide or shuffle through the sand instead of walking.

The mechanism of stingray stings includes both mechanical and venomous injury. First, the barbs pierce through the skin, causing a laceration or puncture wound. In most cases, these wounds are minor, but there are reports of arterial or spinal cord injury related to stingray wounds. The sheath of the barb can also remain in the patient's skin, which may require debridement for removal. The most common venomous effect is severe pain, but the venom can also cause headaches, diaphoresis, vertigo, nausea, vomiting, diarrhea, syncope, muscle cramps, fasciculations, dyspnea, cardiac arrhythmias, hypotension, and seizures.[4][6]

Patients will present with a puncture wound or laceration and report pain out of proportion to the wound. They will often have a known exposure to a stingray or may have a wound on their foot and report that they stepped on something in the ocean. The onset of severe pain is usually immediate. It reaches maximum intensity within 30 to 90 minutes and can last for up to 48 hours.[6] The site of the wound may have evidence of edema and discoloration. In delayed presentations, there may be evidence of local necrosis. Patients may also report systemic symptoms such as nausea, vomiting, diarrhea, lightheadedness, syncope, shortness of breath, headache, abdominal pain, vertigo, or seizures.[3]

The wound should be evaluated using standard procedures, including irrigation of the wound. Plain films may be obtained to evaluate for foreign bodies at the discretion of the provider. Stingray barbs are radioopaque and are visible on plain films. There is not currently a recommended standard for obtaining radiographs in stingray injuries. However, in one retrospective review, 57% of patients had radiographic imaging. Foreign body identification was found in only 2 cases of 119 (and only definitively in one case; there was a possible barb in the other case).[4]

If the patient presents with an injury to the chest or abdomen or severe systemic symptoms, consider an electrocardiogram (EKG), cardiac monitoring, lab work, and chest radiography. If there is a concern for severe systemic illness, including cardiogenic shock, the patient should be transferred to a facility with ICU capabilities, and a medical toxicology consult may be obtained.

In addition to hot water immersion, standard wound care techniques should be applied. Irrigate the wound. If there is suspicion for a retained foreign body, obtain radiographs, explore the injury and remove any foreign bodies as they may result in delayed healing and wound necrosis. If the wound is small, it should be left to close by secondary intention or delayed primary closure, due to the risks of infection. Tetanus status should be inquired about and tetanus immunizations updated as necessary. If there is evidence of necrosis, the wound should be debrided.[3]

There is not a clear consensus on whether antibiotic prophylaxis should be given with some experts arguing that most injuries are minor and prophylaxis should only be given for deep penetrating wounds, wounds complicated by a foreign body, or patients who are immunocompromised. However, in a retrospective review, 70% of patients were prescribed prophylactic antibiotics on initial presentation, and only one patient returned with possible early wound infection. Of the 30% of patients not prescribed antimicrobial prophylaxis, 17% returned with signs of wound infection.[4] Antibiotic prophylaxis, therefore, seems prudent, and coverage should include gram-negative species, including Vibrio, as well as Staphylococcus and Streptococcus.

Stingray injuries, whether through puncture, laceration, or envenomation, usually have a good prognosis. It is important to instruct patients to look for signs of infection after discharge. While it is possible to develop further complications such as infection, most patients will have a significantly decreased amount of pain in one to two days after the incident. Necrosis following marine envenomations was rarely reported in the United States but reported at high rates after freshwater stings in Brazil. A study of 84 freshwater stings in Brazil reported a rate of ulcers and necrosis in 90.4% of cases. The ulcers lasted approximately 3 months and often resulted in scars.[5]

Systemic toxicity or death related to stingray stings is rare and associated with stings resulting in penetrating trauma to the abdomen, chest, or neck resulting in a cardiac laceration, cardiac tamponade, pneumothorax, airway compromise, or hemorrhagic shock. There are cases of delayed fatality secondary to septic shock, osteomyelitis, gangrene, and wound botulism from an infected wound.[3]

The most common complication of stingray sting is wound infection or necrosis. There are significantly higher rates of skin necrosis associated with freshwater stingray injuries.[5] There are case reports of necrotizing fasciitis following stingray injury.[8]

For patients with severe toxic effects, including systemic illness, cardiogenic shock, syncope, shortness of breath, or seizures, a medical toxicology consult may be obtained. The local Poison Control Center may also be a useful consult for these patients.

Stingrays are generally docile animals and are not known for actively attacking humans unless threatened. Stingray injuries can be prevented by encouraging swimmers, divers, and beach-goers to avoid provoking stingrays. Most injuries occur due to accidentally stepping on a ray. This can be prevented by shuffling through the sand without lifting the feet or using a stick or pole to poke the sand ahead of placing the feet. Divers should avoid swimming too close to the seafloor. A fisher who accidentally catches a stingray should not attempt to disentangle it from a net or line.[3]

An interprofessional team approach to managing stingray injuries includes proper training of local medics and lifeguards. Many patients with minor stingray injuries do not present to healthcare facilities and may be managed in the field setting by these first responders. In a review of 153 stingray cases reported to Texas poison centers, 61% were not managed in healthcare facilities.[9] First-responders should be trained to immerse stingray wounds in hot water. They should also require training to transfer the patient to a medical facility for wounds with ongoing bleeding, deep penetration, evidence of systemic toxicity, ongoing pain, or patients with comorbid medical conditions. Within the emergency department setting, nurses and technicians are integral in ensuring that the patient has continuous hot water immersion for 30 to 90 minutes. Emergency clinicians should promptly manage any severe effects of the toxin or wound. Medical toxicology may be consulted for severe effects as well. 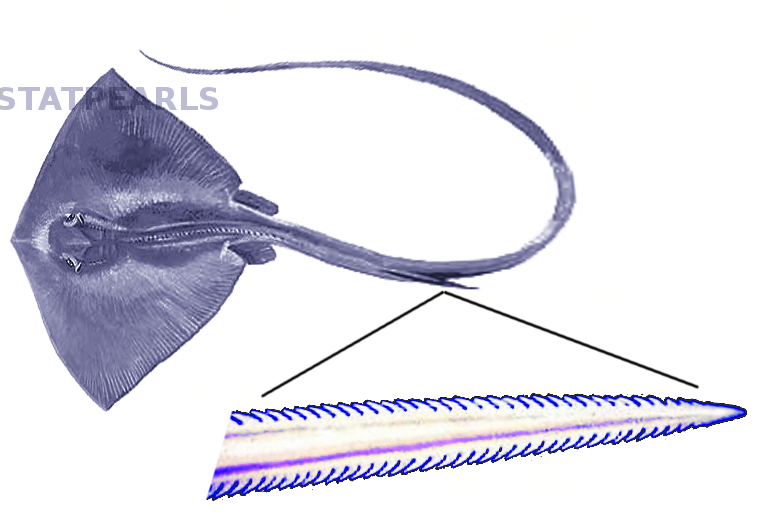