The stellate ganglion forms as a result of the fusion of the inferior cervical and first thoracic sympathetic ganglions. It is present in up to 80% of the population. The stellate ganglion is an oval-shaped structure located anterior to the neck of the first rib. A thorough review of its relevant neuroanatomy is necessary for the successful and safe performance of a stellate ganglion blockade, which is useful in various clinical scenarios.[1][2]

The stellate ganglion is a collection of sympathetic nerves found anterior to the neck of the first rib. It may occasionally extend to being anterior to the transverse process of the C7 cervical vertebra. It measures about 2.5 cm x1 cm x 0.5 cm in dimension. As referred to in its name, it is star-shaped ("stellate" meaning star-shaped). However, the shape and size of this ganglion may be variable in the population.

The stellate ganglion lies anterolateral to the longus colli muscle, medial to the scalene muscles, anterior to the transverse process, and the prevertebral fascia. The ganglion is structurally separated from the posterior aspect of the cervical pleura by the suprapleural membrane. It is bounded medially by the trachea, esophagus, and vertebral column.

Concerning the relevant vasculature, the vertebral vessels are anterolateral in location. The carotid artery is anterior to the ganglion. The superior intercostal artery lies laterally, and the costocervical trunk of the subclavian artery branches out near the lower pole of the stellate ganglion.[3]

The somatic branches from the stellate ganglion are the gray rami communicantes which provide sympathetic fibers to the anterior rami of the C7, C8, and T1.

The visceral branches include the inferior cardiac nerve; this is the contribution of this ganglion to the cardiac plexus in the thorax.

It gives off sympathetic nerve branches to the brachial plexus, which lies laterally, as well as tributaries to the subclavian and vertebral arteries and the brachiocephalic trunk.

Various studies have found that there may be considerable variability in the stellate ganglion across the population. Only 80% of the population has shown to have a structurally fused inferior cervical and first thoracic ganglion.

In the rest of the cases, the inferior cervical and the first thoracic ganglion do not fuse in the usual manner. The inferior cervical ganglion has the designation as the stellate ganglion, which would usually be located anteriorly to the transverse process of the C7 cervical vertebrae.[4]

Approaches to a stellate ganglion block[5][6]:

Multiple approaches have been used to block the stellate ganglion and include the use of ultrasound, MRI, and/or plain fluoroscopic guidance.

The patient is in the supine position with the head in a slight extension. The head is turned towards the opposite side, away from where the block is to be performed. The cricoid cartilage is palpated to ascertain the C6 level. At the C6 level, we palpate for the C6 transverse process, which is also known as the Chassaignac tubercle. In most individuals, the tubercle is 3 to 4 cm cephalad to the sternoclavicular joint at the medial border of the sternocleidomastoid. The needle is advanced in the anteroposterior direction until it hits the tubercle. The needle is withdrawn about 2mm to come out of the longus colli muscle. A test dose of about 1 mL is administered after negative suction, then subsequently administer 8 to 10 mL of local anesthetic administration.

The carotid sheath and the sternocleidomastoid muscles are retracted laterally with the help of the ultrasound transducer. Gentle pressure is applied to reduce the distance between the skin and the tubercle. Needle insertion is towards the Chassaignac tubercle. After contacting the tubercle, the needle is withdrawn about 1 to 2 mm to bring it in the area of the prevertebral fascia. After negative aspiration, the local anesthetic (approximately 2 mL) is injected, and the spread is carefully visualized with the use of the ultrasound. Once the visualization confirms subfascial drug deposition, the clinician can administer the remainder of the local anesthetic.

This method carries a slightly higher risk of pneumothorax and vertebral artery injury. However, it provides a much more consistent blockade as the needle lies closer to the ganglion. A smaller volume of local anesthetic can bring about a more consistent block with this technique. It is particularly useful in cases of failed blocks at the C6 level. The C7 approach always needs imaging as the C7 vertebrae have a vestigial tubercle which is not readily palpable.

Clinical blockade of the stellate ganglion is useful for a wide variety of diagnostic and therapeutic indications, including[1][5][7][8][9]:

Certain conditions may preclude the performance of a stellate ganglion blockade. These include:

These symptoms usually disappear in 4 to 6 hours after the blockade. Successful stellate ganglion blockade can be recognized clinically by the above symptoms and signs.  However, the presence of Horner syndrome after a stellate ganglion block does not equate with complete blockage of the sympathetic outflow to the upper extremity. Extremity temperatures may rise by 1 to 3 degrees, thereby indicating a successful block, which is the most widely employed indicator to determine the success of the stellate ganglion block. Other methods to confirm include measuring a sympathetic-galvanic response, which is an increase in resistance after the block.

Complications which may arise during stellate ganglion blockade include : 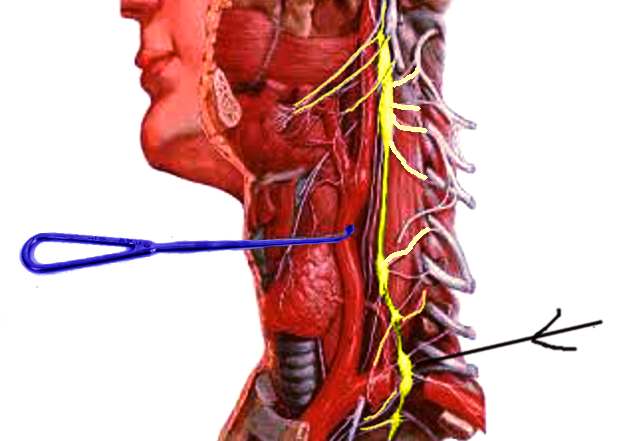