Approximately 85% of all lung cancers are NSCLCs. Adenocarcinoma and squamous cell carcinoma are the most common subtypes, accounting for 50% and 30% of NSCLC cases, respectively.[3]

SCC lung disease originates from the transformation of the squamous cells lining the airways. Squamous cells are thin, flat cells that are found lining many organs of the human body. Squamous cell lung tumors often occur in the central part of the lung or in the main airway, such as the left or right bronchus. The main causative agent of cellular transformation is tobacco smoke, which contains more than 300 harmful agents and 40 potential carcinogens. Transformed squamous cells are characterized by keratinization and/or intercellular bridges and often exhibit a high degree of mutation frequency.[4]

A correct histologic diagnosis is becoming increasingly important because it may predict response and toxicity to therapies.[5] A diagnosis of SCC can be confirmed when a minimum of 10% of the tumor bulk of resected samples exhibits transformation features such as keratinization or intracellular bridges. If the differentiated squamous element of the tumor is minimal, a diagnosis of poorly differentiated SCC is made. An immunohistochemistry (IHC) panel, together with a mucin stain, can help identify NSCLC subtypes. SCC also shows a strong expression of squamous biomarkers, including p63 and p40 proteins.

In 2015, the World Health Organization revised classification to recognize three variants of SCC based on histological examination:[6]

Symptoms of NSCLCs can include cough, chest pain, shortness of breath, blood in sputum, wheezing, hoarseness, recurring chest infections (including bronchitis and pneumonia), weight loss, and loss of appetite and fatigue. However, NSCLC patients often show no symptoms in the early stages of the disease. Metastases may occur in advanced disease, and symptoms may include bone pain, spinal cord impingement, and neurologic symptoms (headache, weakness or numbness of limbs, dizziness, seizures).

Following the physical examination, a complete blood count (CBC), a chest X-ray or computed tomography (CT) scan may be used to evaluate SCC provided that the tumor is of sufficient size. The presence of a cavity, filled by either gas or fluid, within a tumor mass is a classic sign of SCC.[1] Further signs may include pulmonary nodules, mass, or infiltrate, mediastinal widening, atelectasis, hilar enlargement, and pleural effusion. Additional studies including CT abdomen with contrast, brain magnetic resonance imaging (MRI) with contrast, and pulmonary function tests (PFTs) can also be done once the initial diagnosis is made. Assessment of PD-L1, EGFR, ALK fusion oncogene, and other mutations are also done.

The treatment varies with the stage of cancer. Surgical resection is the first line of treatment for stages I and II. For 1A, there is no role for chemotherapy. For 1B, surgical resection with adjuvant chemotherapy is considered in some cases if the tumor size is greater than 4cm. Stage II is treated by surgery followed by chemotherapy, usually, lobectomy is preferred, but in poor surgical candidates, sub-lobar resection can be considered. In stage I and II, radiation therapy is considered if there are positive margins post-surgically, and also in poor surgical candidates.

In NSCLC with somatic driven mutation, specific inhibitor therapy is indicated.[7] For epidermal growth receptor mutation, tyrosine kinase inhibitors like erlotinib, gefitinib, afatinib are used. For ALK mutation, crizotinib is the first line. NSCLC which lacks this mutation depending on programmed cell death-ligand 1 (PD-L1) expression immunotherapy alone or immunotherapy with combined chemotherapy is considered. Chemotherapy for neoadjuvant and adjuvant therapy includes cisplatin with vinorelbine or etoposide, vinblastine, gemcitabine, docetaxel, or pemetrexed are considered. In patients who cannot tolerate cisplatin, paclitaxel with carboplatin is considered. First-line systemic therapy for advanced-stage includes bevacizumab, carboplatin, and paclitaxel. Other options are cetuximab with cisplatin and vinorelbine or erlotinib with platinum-based chemotherapy.

SSC of the lung must be differentiated from other lung cancers, including small cell lung cancers (SCLC) and other NSCLC such as adenocarcinoma and large cell carcinoma.

Surgery is the treatment of choice for stage I and II. For stage IIIA, surgery is considered only in individualized cases.

The immunotherapeutic atezolizumab (anti-PDL1, RG7446, MPDL3280A monoclonal antibody against PD-L1 (programmed death-ligand 1) is being evaluated in a phase III clinical trial as a potential first-line treatment for patients with non-squamous or squamous non-small cell lung cancer whose tumors express PDL1. A phase I trial evaluating atezolizumab in combination with erlotinib or alectinib in patients with non-small cell lung cancer is also ongoing. IPA-3 or OTSSP167 and auranofin was highly synergistic in EGFR or KRAS mutant squamous cell carcinoma cell lines and decreased tumor volume in mice models.[8]

Platinum-based chemotherapy, along with second active cytotoxic agents, is usually considered in patients who require chemotherapy. The chance of toxicity increases beyond four to six cycles of therapy and is not recommended beyond that. In patients with no optimal response, maintenance therapy can be continued with one or more components, but typically the platinum-based therapy is discontinued, given its severe toxicity.[9] The patients should be monitored for nephrotoxicity, ototoxicity, cytopenias, and significant neuropathy. Folic acid, vitamin b12, and sometimes dexamethasone are usually considered to avoid some side effects of chemotherapy.

Staging in lung cancer is based on CT scan images according to the Tumor-Node-Metastasis (TNM) staging system. This is a summary of the 8th Edition of TNM in Lung Cancer, which is issued by the IASLC (International Association for the Study of Lung Cancer) and replaces the TNM 7th edition.[10]

Proposed T, N, and M descriptors for the eighth edition of TNM classification for lung cancer

Note: Changes to the seventh edition are in bold.

Squamous cell lung cancer can spread to multiple sites, including the brain, spine and other bones, adrenal glands, and liver. Due to the lack of targeted therapies for SCC and the late stage of detection, the prognosis is often poor for these patients.

Complications from SCC of the lung can include:

Education on avoiding or mitigating against risk factors such as tobacco products and causes of occupational disease (such as the use of personal protective equipment) can reduce SCC development. Education about early cancer screening with low dose CT scan of the chest is important for early recognization and treatment to prevent tumor burden. Counseling patients about stages of cancers and the chance of complete cure in case of early detection and counseling on palliative care in advanced stages is very important to reduce stress both for patients and loved ones. 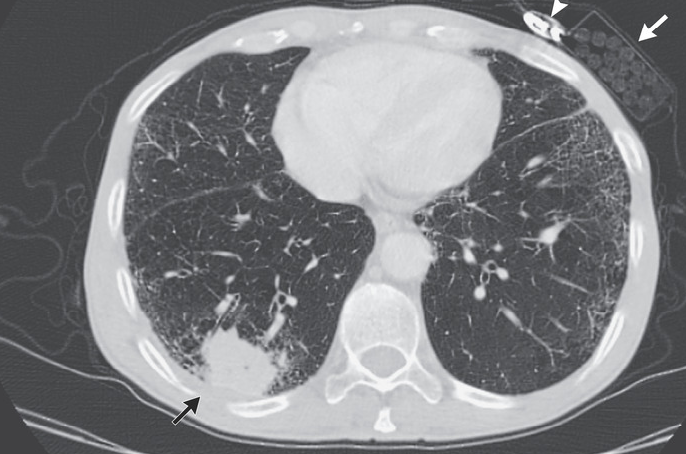