A spigelian hernia is a rare, abnormal protrusion of abdominal contents or peritoneum through a defect (spigelian fascia), which is comprised of the transversus abdominis and the internal oblique aponeuroses. It typically results from an underlying pathology that increases intra-abdominal pressure, abdominal wall trauma, or degeneration of abdominal aponeurotic layers. This activity examines the diagnosis and evaluation of spigelian hernia and highlights the role of the interprofessional team in caring for patients with this condition.

A spigelian hernia is a rare ventral hernia that is defined as herniation of abdominal contents or peritoneum through a defect, namely the Spigelian fascia which is comprised of the transversus abdominis and the internal oblique aponeuroses.[1]

A Spigelian hernia typically results from underlying pathology which increases intra-abdominal pressures, abdominal wall trauma, or degeneration of the aponeurotic layers of the abdominal wall as happens with aging or disorders of collagen synthesis. In other cases, this hernia can be idiopathic and has previously been referred to as a “spontaneous lateral ventral hernia.”[1][2]

Spigelian type hernias are exceedingly rare, with an incidence ranging from 0.12% to 2% of all abdominal wall hernias.[1][2] Incidence has been observed primarily in females and those over 60 years of age. As with other abdominal wall hernias, patients with certain comorbidities that lead to elevated intraabdominal pressures or weakening of abdominal fascial layers have an increased risk of herniation. These conditions include chronic obstructive pulmonary disease (COPD), which produces chronic cough, patients with cirrhosis who develop ascites, or pregnant women, or obese patients. Patients who suffer from collagen disorders are at elevated risk for herniation, including Ehlers Danlos syndrome or the elderly.[1][2][3] These hernias rarely occur in children, and when they are described, they may be associated with other anomalies such as undescended testes.

Although exact pathophysiology has not been fully defined, one of the widely accepted theories involves a weakening of the anterior abdominal wall fascia, including the Spigelian fascia. These changes in the structure or arrangement of the abdominal wall can lead to focal weaknesses, which predispose patients to herniation.[4][5] This topic will be discussed further in detail below.

The Spigelian fascia is located lateral to the rectus abdominis muscle along the linea semilunaris, or semilunar line. This layer is comprised of aponeuroses located between the rectus abdominis medially and the semilunar line laterally. This type of hernia typically involves herniation at or inferior to the linea arcuata, or arcuate line. The arcuate line is most notably known for being a transition point for the layering of the anterior and posterior rectus sheaths. This line demarcates the termination of the posterior layer of the rectus sheath containing transversus abdominis aponeurosis as the rectus muscles are bound posteriorly solely by transversalis fascia. The intersection of the semilunar line and arcuate line creates an interesting physiologic weakness as the posterior rectus sheath is no longer present, allowing for herniation lateral to the rectus. Additionally, the weakness results from attenuation of transversus abdominis and internal oblique aponeuroses as they traverse laterally from their coalescence to create two distinct layers. It is at the separation of these two aponeuroses that herniation most commonly occurs. Of note, due to the overlying layer of the external oblique aponeurosis at this point along the abdominal wall, there is an increased chance of intramuscular dissection of the hernia. This is defined as an interparietal hernia. This can lead to occult hernias, which are often difficult to palpate and diagnose. In these cases, imaging studies are inherently necessary if there is suspicion of an underlying hernia.[4][5][6]

Commonly, Spigelian hernias are localized but asymptomatic protrusions through the abdominal wall. Patients may describe a painful or painless “bulge” in their abdominal wall, particularly when standing, that may acute or chronic onset. Depending on the contents contained within the hernia, pain may vary greatly in terms of severity, character, or location. Commonly, patients will present in the urgent setting secondary to complications associated related to a hernia. With this, the timing of symptom onset and evolution of symptoms should be ascertained, especially if a practitioner is concerned about incarceration or strangulation. Additional history should seek information related to chronic increases in abdominal pressure–chronic cough secondary to COPD, ascites, obesity, or pregnancy.

As described above, hernias can be contained deep to the external oblique musculature, which allows them to evade clinical detection and palpation. Physical exam sensitivity may be increased by examining the patient in the standing position and with Valsalva maneuvers.  However, not all patients with a Spigelian hernia present with a palpable mass, despite examining in several positions and with Valsalva. Thus, clinicians may be unable to appropriately diagnose up to 50% of Spigelian hernias with physical exam alone, particularly in obese patients.

These hernias often remain undiagnosed until they become painful or patients experience more sinister symptoms consistent with incarceration, strangulation, or bowel obstruction. Symptoms of a Spigelian hernia may include localized pain at the site of herniation, with or without palpable features. Due to the rigid borders that encase a Spigelian hernia, incarceration rates are significantly higher than other abdominal wall hernias. Several studies have shown that roughly 27% of diagnosed Spigelian hernias will incarcerate.

The manifestation that warrants immediate operative repair includes signs and symptoms consistent with strangulation or peritonitis – including an irreducible hernia with overlying erythema and tenderness, involuntary guarding, rigidity, or rebound tenderness. These signs coupled with clinical suspicion or objective evidence of a systemic inflammatory response syndrome are also factors that may influence operative urgency.

A palpable bulge along the semilunar line at the Spigelian fascia facilitates easy diagnosis. However, if clinical suspicion remains high, despite history and clinical exam, radiological evaluation is warranted. Ultrasound has been proven to be a helpful first-line imaging modality.[6][7][8] This exam is commonly performed along the semilunar line with patients standing to evoke higher intra-abdominal pressure. Valsalva maneuver may also be employed to aid in diagnosis. If suspicion is still high despite ultrasonic evaluation, Computed Tomography (CT) may be utilized. CT is the most reliable imaging study for diagnosing Spigelian hernia.[7] CT should be performed with oral contrast because this will reveal bowel contents related to or contained within a hernia.

Unlike other ventral hernias, Spigelian hernias are not amenable to conservative treatment, including watchful waiting. Due to the high incarceration rate and subsequent strangulation, operative repair is recommended and has become the mainstay of treatment. There are several options regarding surgical management of Spigelian hernias. Repair of Spigelian hernias may be done in an open, laparoscopic, or even robotic approach.[1][2]

Conventional open surgical technique has been well described and repair may be performed with either primary fascial closure or with mesh. This procedure is typically carried out via a transverse incision or even left paramedian incision. Classically, a Gridiron's or McBurney's incision is made at a right angle to a line joining the anterior superior iliac spine and the umbilicus, centered on McBurney's point. As dissection proceeds posteriorly, the hernia sac is identified and isolated. Depending on the contents of the sac and presence or absence of bowel strangulation, the hernia may be easily reduced with herniotomy or may require omentectomy or bowel resection. Some surgeons may elect to place non-absorbable sutures when closing the fascial defect, while others may choose a synthetic mesh or a biologic mesh.[4][5]

Laparoscopic surgical management is superior in terms of morbidity and length of stay compared to open techniques.[9] Several methods of laparoscopy have been utilized for repair of Spigelian hernias including intraperitoneal and extraperitoneal. Intraperitoneal Onlay mesh repair (IPOM) is performed with reduction of contents of the hernia, lysis of adhesions if necessary, and placement of synthetic mesh with a circumferential margin of 5 cm extending from the edges of the defect. The transabdominal preperitoneal approach is another laparoscopic technique that requires dissection of the peritoneum to create peritoneal flaps in which the mesh will be placed. This is similar to IPOM method, however, the mesh lies anterior to the peritoneum as compared to posterior in IPOM approach. One final laparoscopic approach is a total extraperitoneal repair (TEP). This repair is unique in that the peritoneum is not entered. A balloon is inflated, allowing for extraperitoneal dissection of the peritoneum, identification of hernia sac, and reduction. Similar to the previous techniques, a 5-cm overlap is traditionally utilized for mesh placement.

Robotic techniques have recently been described and are carried out similarly to IPOM laparoscopic approach.[10] Studies have not yet been conducted on the efficacy and safety of robotic versus laparoscopic repairs.

If there is a concern for intra-abdominal infection and/or strangulation of the hernia contents necessitates a concomitant bowel resection, a synthetic mesh should not be utilized in the repair. There is no evidence-based consensus on the repair of a Spigelian hernia in the setting of contamination. Still, laparoscopic suture repair, biologic mesh repair, synthetic mesh placed in the preperitoneal space, or staged mesh repair all remain viable options.

The differential diagnosis for a Spigelian hernia is relatively narrow but includes other morbid conditions. Other pathologies that must be considered include rectus sheath hematoma, incisional hernia, ventral hernia, a malignancy of soft tissue or abdominal wall, abscess, or lymphadenopathy.

Generally, patients who suffer from uncomplicated Spigelian hernias have an excellent prognosis and following surgical repair. If there is evidence of bowel ischemia or systemic inflammatory response syndrome secondary to hernia strangulation, morbidity and mortality increase.[2][4]

Incarceration risk is high with Spigelian hernias. Therefore, surgical management is the mainstay of treatment for all patients. Prevention of this type of hernia requires correction of underlying pathology, which may predispose patients to increases in intra-abdominal pressure. Additionally, adequate nutrition and exercise in patients over the age of 50 are vital for maintaining a healthy abdominal wall.

In a recent study, roughly 27% of patients required emergent surgical intervention for Spigelian hernia secondary to strangulation.[4] Vigilance for these rare hernias requires interprofessional teamwork and communication to prevent missed diagnoses or further patient morbidity if left untreated. As stated above, these hernias may be occult with no symptomatology; however, they can also be obvious. Along with this spectrum and disease progression, these hernias may be encountered by primary care physicians, emergency physicians, radiologists, and surgeons. If any physician is suspicious of this type of hernia, it is recommended that they proceed with an ultrasound or CT scan. If there is any evidence of incarceration, these patients need to be evaluated by a surgeon for elective repair to mitigate the risk of incarceration and strangulation. A concerted effort by primary care physicians, radiologists, emergency medicine physicians, and surgeons can ultimately decrease the risk of strangulation and further morbidity. Astute physicians will utilize history, physical examination, and radiographic studies as described above to elicit a diagnosis that can be acted upon swiftly to improve patient care. [2] [Level V] 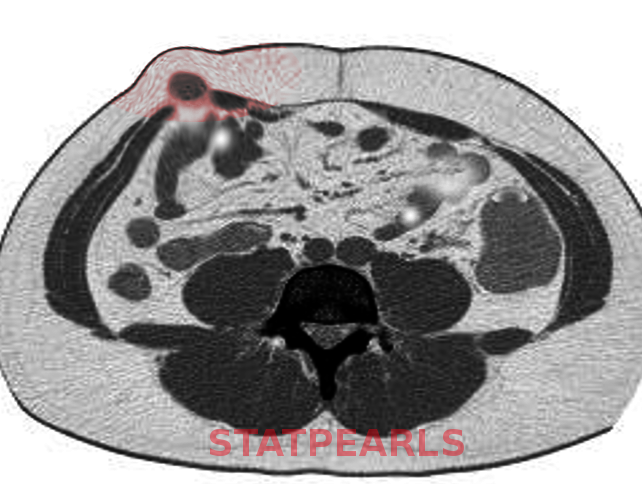