The black widow spider species, also known by its biological nomenclature as the Latrodectus species is one of more than 40,000 different species of spiders. Clinically, it is one of most significant species of spiders worldwide. Within the United States, it is responsible for most of the clinically significant envenomation among all species of spiders. There are more than 30 different types of black widow spiders worldwide; however, not all species are as relevant due to their separation from human habitat. The Black Widow, or Latrodectus mactans, is easily identified by its characteristic shiny black body and strikingly red hourglass-shaped marking on the abdomen. This activity reviews the pathophysiology and presentation of a black widow spider bite and highlights the role of the interprofessional team in its management.

The genus Latrodectus derives its ubiquitous nickname “black widow” from its physical characteristics. The Black Widow, or Latrodectus mactans, is easily identified by its characteristic shiny black body and strikingly red hourglass-shaped marking on the abdomen. Interestingly, this species is well known by the phenomenon of the female spider devouring the male spider after mating, thereby making her a widow. Black widow spiders range from 5 to 15 mm (0.25 to 0.50 inch) in length. They have fangs and venomous glands sufficient to cause harm to humans. The female gender of the species is the most dangerous, compared to their male counterparts.  Females have more prominent venomous glands, longer fangs and a body size that can reach up to 20-times larger than their male counterparts.

Symptoms of envenomation range from local irritation and pain to a more systemic syndrome termed “latrodectism.” Latrodectism is characterized by variations in presentations ranging from autonomic disturbances to widespread pain and rigidity. Treatment ranges from simple analgesia to the administration of antivenom.

Latrodectism is caused by the bite of a female black widow spider.[3]

The venom of the black widow spider is a combination of biologically active proteins, peptides, and proteases. The primary toxin found in the venom of the black widow is alpha-Latrotoxin. It binds irreversibly to the protein receptors on presynaptic neurons and creates calcium ([Ca2+])-permeable channels within the lipid bilayers. This influx of [Ca2+] ions results in massive exocytosis of neurotransmitters, including acetylcholine, dopamine, norepinephrine, epinephrine, and glutamate.  It is this release of neurotransmitters which leads to the characteristic symptomatology of pain, muscle rigidity, vomiting, and sweating.[6]

Patients typically present within hours after the bite has occurred. Classically, the patient describes activities in which they have entered into the habitat of the black widow spider; such as hiking, camping, gardening, shopping or activities in a garage. Most often, these bites occur on the patients’ extremities and often go initially unnoticed but can also be immediately associated with pain.

Within minutes of being bitten, the area adjacent to the wound site may become painful, erythematous and edematous followed by the development of a central punctum. Fang marks may be evident. There is also a classic appearance of isolated diaphoresis within an area of central clearing. Neuromuscular symptoms, including severe muscle pain and cramping, usually occur within an hour. Increased autonomic function leading to tachycardia, tachypnea and hypertension are also associated and are often correlated with increased pain.

Some patients may progress to latrodectism. Latrodectism refers to the systemic manifestations of a widow bite. Symptoms include diffuse muscle rigidity and cramping, tenderness and burning around the bite, truncal and abdominal tenderness, nausea, and vomiting. The diffuse pain associated with latrodectism spreads contiguously from the bite site. In other words, if the bite occurs on the ankle, the pain will progress proximally along the leg, and then to the adjacent extremity, abdomen, chest, and back. All extremities can be involved.

The diagnosis of black widow envenomation is almost exclusively clinically established. Visualizing the bite along with its associated symptoms and obtaining a detailed history will allow accurate diagnosis. To officially confirm the diagnosis, the patient must bring in the spider after witnessing the bite. An entomologist, medical toxicologist, or another qualified specialist must then identify the spider. However, this is not necessary, and it should not be recommended to patients to capture, harm, or handle the spider. [7][8]

In a large case series involving 23,409 exposures to black widow venom, Monte et al. found that 65% of patients presented with minor clinical effects, 33.5% moderate effects (longer duration of symptoms, treatment required) and 1.4% with major effects (life-threatening). Of the 9872 cases with at least minor effects, the most common symptoms of envenomation were dermal irritation (58.7%), erythema (28.6%), pain (17.9%), edema (13.6%) and abdominal pain (9.7%). Lab values are generally non-specific but may show an elevated white blood cell count, hematuria, and elevated liver enzymes. Other rare manifestations include rhabdomyolysis and myocarditis resulting in elevated creatine kinase and myoglobin in the blood and urine.

When chest pain is present, particularly in patients with a history of coronary artery disease, an electrocardiogram is appropriate.

The initial management for all cases of black widow envenomation includes local wound management and tetanus prophylaxis. Calcium gluconate and methocarbamol have been shown to be ineffective and are no longer recommended.

Mild envenomations which include pain at, and directly adjacent to, the wound can be further managed with oral analgesics, as needed. Management of moderate-severe envenomation, presenting as pain at the wound site with radiation and characteristic systemic symptoms, includes the use of opioids for pain management and benzodiazepines for muscle spasm control, as needed. Caution is necessary when co-administering opioids and benzodiazepines and hospital observation may be necessary. Prescribing agents from both classes at discharge is not recommended.

Black widow spider antivenom is safe and highly effective in most patients. It is effective in relieving symptoms, reducing the need for additional therapy, and decreasing admission rates. Typically, after administration and a brief period of observation, patients recover fully and can go home without complication. However, the antivenom has been associated with several severe allergic reactions that have led to precautionary assessment before antivenom administration. Most experts would recommend administration of antivenom to patients without a history of asthma or atopy, whose symptoms are not effectively treated with analgesics.[2][6]

The differential for black widow spider envenomation includes bites from other arthropods, as well as other causes of tachycardia, hypertension, muscle spasm, abdominal, back and chest pain. Other invertebrate envenomations or bites to consider include scorpion stings, as well as those from other spider species, namely the tarantula or brown recluse. With regard to abdominal pain, the practitioner must always consider other sources of acute abdominal pain, including but not limited to appendicitis, trauma, or other causes of acute abdominal pain. Back pain from muscle spasm or other etiology should be similarly considered. Regarding chest pain, especially as black widow bites can rarely cause troponin elevation, the practitioner must include acute coronary syndromes or myocarditis on their differential.

The prognosis for black widow bites is good. Most pain and systemic symptomatology are self-limited. Although patients may encounter long-term pain or muscle spasms after black widow bites, this phenomenon is rare. Similarly, systemic toxicity, including abdominal pain and autonomic dysfunction, is usually temporary. Recovery is usually complete within 24 to 48 hours. Finally, administration of anti-venom with a subsequent anaphylactic reaction is, as with most anaphylactic reactions, rare and usually a transient condition. Most patients can, and should, expect a full recovery after black widow envenomation.

Anaphylaxis associated with the antivenom

Consultation with a medical toxicologist is strongly encouraged.

After discharge the patient should be asked to return back to the ED if the following symptoms develop:

Envenomation by a black widow spider is rare in the US and it has a varied presentation. Because of the morbidity of the bite, healthcare workers including the triage nurses must be aware of the signs and symptoms of this particular spider bite. The vast majority of patients present to the emergency department and the quicker the care provided, the better the outcome. Most patients have an eventful outcome. After discharge, the patient should be encouraged to keep pesticides in the home and/or have the home inspected for any more spiders. [9][10] 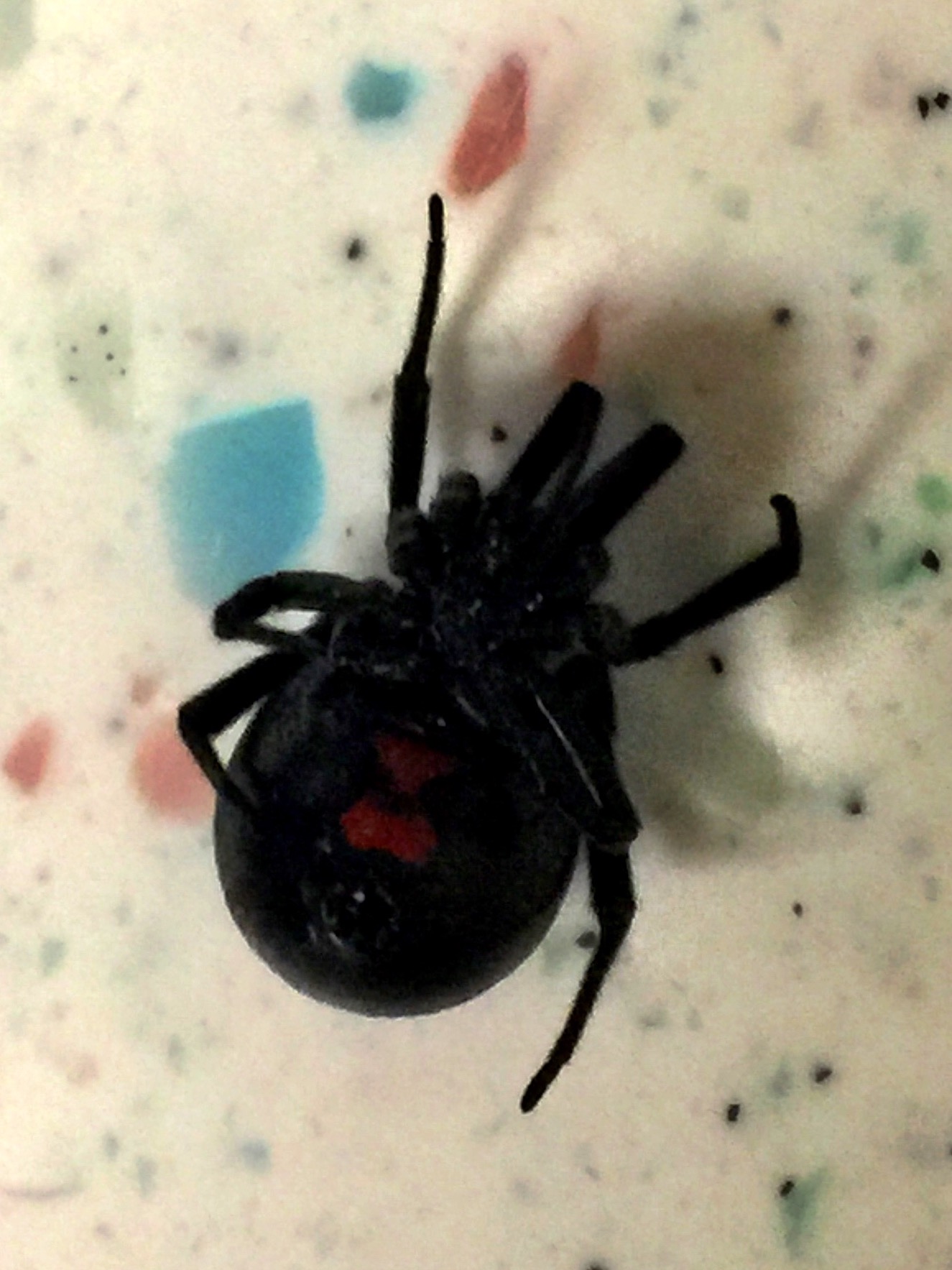 Rueda A,Realpe E,Uribe A, Toxicity evaluation and initial characterization of the venom of a Colombian Latrodectus sp. Toxicon : official journal of the International Society on Toxinology. 2017 Jan     [PubMed PMID: 27889602]