Sphenopalatine ganglion (SPG) neuralgia is a complex disease characterized by chronic head and neck pain, often accompanied by autonomic features. Although symptoms are highly variable, patients typically experience dull headaches associated with pain in the maxillary arch and teeth. The onset of intense pain can be accompanied by profuse sweating and vasomotor changes. The SPG has been a target for numerous procedures to ease symptoms of myofascial pain, post-herpetic neuralgia, post-traumatic headache, cluster headache, and pain originating from the temporomandibular joint and various head and neck cancers. This activity reviews the role of radiofrequency ablation of the SPG, its indications and contraindications, and highlights the role of the interprofessional team in the management of patients with facial and neurological pain syndromes.

Sphenopalatine ganglion (SPG) neuralgia is a complex disease characterized by chronic head and neck pain often accompanied by autonomic features. Although symptoms are highly variable, patients typically experience dull headaches associated with pain in the maxillary arch and teeth. The onset of intense pain can be accompanied by profuse sweating and vasomotor changes. The SPG has been a target for numerous procedures to ease symptoms of myofascial pain, post-herpetic neuralgia, post-traumatic headache, cluster headache, and pain originating from the temporomandibular joint (TMJ) as well as various head and neck cancers. The SPG block was first reported by Sluder in 1908, who injected 20% cocaine solution via a transnasal approach. In 1970, Ruskin studied the effects of SPG blocks for the management of headaches, facial neuralgia, low back pain, and TMJ pain. In 1981, Devoghel demonstrated its benefit for cluster headaches. Currently, cluster headaches, trigeminal neuralgia, migraine headaches, and atypical facial pain are the most common indications for performing an SPG block.[1][2]

Radiofrequency thermocoagulation (RFTA), also known as radiofrequency neurotomy, is a technique that employs thermal energy to ablate target nerves involved in the pathological transmission of painful stimuli. The RFTA device uses high frequency (300-500 kHz) electromagnetic radiation to create charged molecular oscillation, which in turn produces heat. In conventional RFTA, the needle generates a 5 to 15 mm electric field that ultimately increases the temperature of the affected tissue to >45 degrees C. This temperature produces local tissue damage and loss of myelinated nerve fibers. When the needle tip heats to 80° C for 60 to 90 seconds, it reliably ablates an 8 to 10 mm area. Pulsed radiofrequency ablation (PRFA) is a similar soft tissue destroying modality.[3] PRFA is performed with short 20 ms pulses every 0.5 seconds, allowing the tissue to cool between pulses and, therefore, not exceeding the target temperature of 42 degrees C. The advantage of PRFA is that there is less tissue destruction and less pain, but the disadvantages are that there is typically a shorter duration of relief, and the procedure may require more frequent repeat treatments, which may increase the cost.[4][5]

The sphenopalatine ganglion is an inverted cone-shaped structure and one of the largest parasympathetic ganglia in the skull. It is also known as the pterygopalatine ganglion (PPG) since it is located in the medial wall of the pterygopalatine fossa (PPF); other names include Meckel’s ganglion and the nasal ganglion. The efferent nerves of the SPG are the greater and lesser palatine nerves, the nasopalatine nerve, the orbital and pharyngeal branches, and the posterior, superior, and inferior lateral nasal branches of the trigeminal nerve. Although input to the SPG mainly consists of preganglionic parasympathetic fibers of the greater petrosal nerve, it also receives sympathetic and somatic sensation signals.

The SPG plays a critical role in headache disorders, especially trigeminal autonomic cephalgias (TACs). The key features of TACs are unilateral headaches typically associated with an autonomic dysfunction like lacrimation and rhinorrhea, ptosis, and miosis. Cluster headaches are the most common TACs. Stimulation of the SPG causes cerebral vasodilatation and increases cerebral blood flow, which results in the release of vasoactive intestinal peptides, acetylcholine, and nitric oxide. These inflammatory substances, in turn, activate trigeminal nociceptors and cause headaches.[1]

Contraindications to SPG radiofrequency ablation (RFA) include uncontrolled local or systemic infections, coagulopathy, lack of response to SPG block or chemical ablation, and hemodynamic instability. The procedure should be avoided in patients with substantial changes in the local anatomy from trauma or surgery. Pre-procedure cardiac assessment should thoroughly evaluate patients with implanted cardiac pacemakers or defibrillators to improve perioperative safety. Such patients require post-procedural cardiac monitoring.[10][1]

SPG RFA should be performed by appropriately trained physicians with experience using fluoroscopy for needle placement. These physicians are typically fellowship-trained and board-certified in pain medicine, with backgrounds in anesthesiology, physical medicine, rehabilitation (PM&R), neurology, emergency medicine, family medicine, or psychiatry. Support staff should include a radiology technician, a nurse to assist with equipment, an anesthesia provider, and patient support.[11]

Patients need to be informed about the procedure in detail in a separate clinic visit before the procedure. Details should include procedural steps, benefits of the procedure, contraindications and potential complications, and alternative therapies. All patients must discontinue anticoagulation for the appropriate length of time before the procedure.  Patients should be advised to visit a primary care provider to bridge to short-acting anticoagulants in more complex situations.

Procedural clearance should be obtained in patients with cardiovascular diseases. These patients should be advised not to eat for 6 to 8 hours prior to the clearance appointment. Diabetic patients may require dose adjustment for insulin and oral hypoglycemic medications. Accurate medication reconciliation, including allergies, should be performed before the procedure. Activities like driving or operating machinery should be avoided for at least 24 hours after the procedure. A detailed informed consent discussion between the patient and the attending physician should precede the procedure. Consent documentation should include the patient's name and identification, such as medical record number, age, and preferred gender. The procedure site should be marked. A technician should make sure the equipment is in proper working order. A time-out should be performed when the patient is on the procedure table, in the presence of all the involved personnel, to ascertain that the correct patient is undergoing the correct procedure in the correct location. Thorough aseptic precautions and the use of a sterile procedure tray are standard procedures.[11][12][13]

Fluoroscopic approach: Narouze et al. described the fluoroscopic guided infrazygomatic approach for SPG RFA. For this technique, the patient is positioned in the supine position, and a lateral fluoroscopic image is obtained. This image is best aligned by rotating the patient’s head or the fluoroscope C-arm in a manner that superimposes the rami of the mandibles on top of each other and creates an “inverted vase” appearance of the pterygopalatine fossa. The skin entry site is marked just anterior to the mandible and inferior to the zygomatic arch. A wheal is raised at the skin entry point using 1% lidocaine anesthetic solution. A blunt RFA needle with a 22-gauge diameter, 10-cm length, and a slightly bent 5-mm active tip is ideal for the procedure. The RFA needle is inserted at the skin site and advanced superiorly and medially towards the pterygopalatine fossa under real-time fluoroscopy guidance. The direction of the needle should be confirmed using an anteroposterior view, ensuring that the needle tip remains lateral to the lateral nasal wall. If the needle passes the lateral pterygoid plate, it should be redirected cephalad and anteriorly. This change in needle direction will help the curved needle tip to reach the pterygopalatine fossa. A 50-Hz sensory stimulation at <0.5 V will then produce deep paresthesia behind the root of the nose. Prior to lesioning, 0.2 to 0.5 ml of contrast agent should be injected under real-time fluoroscopy to rule out intranasal or intravascular spread. The region is then anesthetized using 0.5 ml of 2% lidocaine solution. Two radiofrequency lesions in this region are then created at 80 degrees C for 60 seconds each. Radiofrequency ablation is an extremely painful procedure, so it is critical to inject 0.5 mL of 0.5% bupivacaine along with 5 mg of triamcinolone after lesioning to prevent the development of neuritis.[11]

CBCT approach: Loomba et al. described another method to perform the SPG RFA. They used cone-beam computed tomography (CBCT) to guide needle placement. All of the steps of the procedure are similar to the technique described by Narouze et al. except that an interventional radiologist confirms the location of the tip of the radiofrequency cannula after the needle tip walks off the lateral pterygoid plate. The advantage of CBCT over bi-plane fluoroscopy is that CBCT offers improved anatomic visualization and possibly allows more accurate needle tip placement. Also, a CBCT scanner is less expensive than other modalities and causes less radiation exposure.[12]

Complications of SPG RFA are mostly associated with the needle insertion and may include infection, internal bleeding or epistaxis, injury to the maxillary artery and nerve or its branches (greater and lesser petrosal nerves), and hemodynamic instability. Occasionally hypesthesia and/or dysesthesia of the upper teeth, hard palate, or pharynx may result, as well as a decrease in lacrimation or nasal mucus production. SPG RFA often causes reflex sinus bradycardia; therefore, close monitoring of vital signs throughout the procedure is essential.

Sphenopalatine ganglion RFA is a relatively quick, cost-effective, and safe procedure with a low complication rate that has demonstrated itself to be a useful method for treating chronic cluster headaches. Salgado-Lopez et al. from Spain published their results on the safety and efficacy of SPG RFA; they followed 37 SPG RFA patients for a mean of 68.1 months (range, 15 to 148 months) after the procedure. Five of their patients (13.5%) experienced complete clinical relief of both pain and parasympathetic symptoms; 21 patients (56.8%) had partial or transient relief, and 11 patients (29.7%) did not improve. They reported no complications in this series. The authors claim this is the largest number of patients and the longest follow-up period for SPG RFA published in the literature.

There is a prospective, multicenter, randomized, controlled, blinded-endpoint trial to test the safety and efficacy of SPG pulsed radiofrequency treatment for cluster headache underway in China. The sample size of this study is 80 patients, and follow-up is three years. This study aims to investigate whether the SPG pulsed radiofrequency ablation method is superior to a traditional SPG nerve blocking. It may also provide evidence that SPG pulsed RFA is a safe, effective and minimally invasive alternative for patients with cluster headaches who have failed medical management.[14][15]

The sphenopalatine ganglion is an effective target for treating cluster headaches using anesthetic blocks, RFA, or neurostimulation. Additionally, there is growing evidence supporting the use of SPG RFA to manage several other conditions, including myofascial pain, post-herpetic neuralgia, post-traumatic headache, cluster headache, and pain originating from the temporomandibular joint as well as various head and neck cancers. However, most of these studies were performed with small sample sizes and a short duration of follow-up. Further controlled studies are warranted to produce consistent results and confirm these findings. 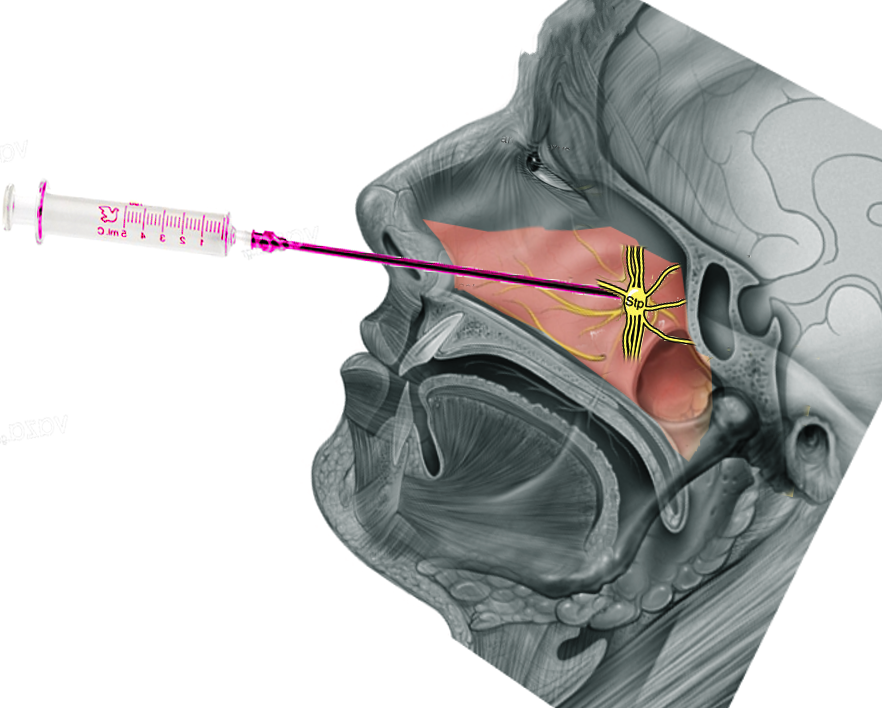