Slipped capital femoral epiphysis (SCFE), also called slipped upper femoral epiphysis (SUFE), is the most common hip pathology in pre-adolescent and adolescents.  However, this diagnosis is often delayed or missed due to either atypical presentation, such as thigh or knee pain, or the chronic nature of the presentation.  The differential diagnosis for pre-adolescent and adolescents presenting with leg pain is broad; thus, the medical provider must always consider the diagnosis of SCFE.  Delay in the diagnosis of SCFE is associated with higher rates of complications, including femoral head osteonecrosis. [1]

Most cases of SCFE are idiopathic. Often there is no history of trauma or injury before the onset of symptoms.  Additionally, an association has been reported between the development of SCFE and patients with endocrine disorders (including hypothyroidism, hyperthyroidism, hypopituitarism, growth hormone deficiency) and renal disorders. [2]

SCFE is one of the most common hip pathologies affecting pre-adolescent and adolescent patients, occurring in approximately 10.8/100,000 (Range: 0.33/100,000-24.8/100,000). The single most significant risk factor for SCFE is obesity. Other risk factors include male sex, periods of rapid growth, and prior radiation therapy. The average age of onset is 11.2 years in females and 12.0 years in males. Approximately 25% (Range: 8-50%) of cases are bilateral. [1]

SCFE occurs when the femoral epiphysis is displaced posteriorly and inferiorly relative to the femoral head and neck. The exact mechanism remains uncertain.  It is hypothesized that displacement occurs due to a high physiologic axial load transmitted across a relatively weak physis. Conditions such as obesity increase the mechanical weight and force transmitted, whereas certain endocrine or renal disorders may contribute to the weakening of the physis. [3]

The clinician should always consider SCFE in a pre-adolescent, adolescent or young adult patient with a complaint of atraumatic hip, thigh or knee pain, particularly if associated with limping or inability to bear weight.  Pain is most often reported in the hip (52%); however, pain associated with SCFE may also be reported in the groin (13.9%), thigh (35%), or knee (26%). [4]  Patients with SCFE on average have 4-5 months of symptoms prior to diagnosis; however, patients with SCFE may also present with less than 3 weeks of symptoms.  While most patients will not report any history of trauma or injury before the onset of symptoms, a history of injury or trauma does not exclude the possibility of SCFE. [1][5]

The evaluation of patients with suspected SCFE should be begin with bilateral hip radiographs with anteroposterior (AP) and frog-leg lateral views.  Radiographs should be bilateral to allow for comparison.  The line of Klein is a radiographic finding used to detect SCFE plain radiographs.  On the AP view, a line is drawn along the superior, and in the normal hip, intersects the lateral part of the superior femoral epiphysis. If the line of Keline fails to intersect the epiphysis, SCFE is likely present (known as Trethowan sign); however, this method has relatively low sensitivity for diagnosing SCFE.[5]  Other plain radiography methods of detecting SCFE include the Southwick Slip Angle and the "S" sign.  The Southwick Slip Angle measures the degrees of epiphyseal displacement in relation to the diaphysis; this method is considered more sensitive in detecting SCFE.  The "S" sign consists of a line drawn along the inferior cortical outline of the femur in the frog-leg view that extends from the proximal femoral head-neck junction to the proximal femoral physis; it is normal when the cortical outlines are symmetrical, without sharp turns, or broken continuity.  SCFE is likely to present if the cortical outlines are asymmetrical, have a sharp turn, or broken continuity.  Use of the "S" sign in conjunction with line of Klein was found to increase both sensitivity and specificity in detection of SCFE. [7]

If radiographs do not demonstrate findings consistent with SCFE, but clinical suspicion is high, the clinician can consider obtaining magnetic resonance imaging (MRI) to further evaluate.[5]  Several recent small studies suggest that ultrasound may be a more sensitive modality compared to radiographs in diagnosing SCFE; however, further investigation of this application of ultrasound is needed.[8]

The clinician should consider laboratory testing to evaluate for possible underlying medical conditions such as endocrine or renal disorders if the patient is less than 10 years of age or pre-pubertal, has short stature (more than two standard deviations below mean for age), or weight below the 50th percentile for age.  Initial laboratory testing can include thyroid stimulating hormone (TSH) level, thyroxine level (free T4), blood urea nitrogen (BUN), and serum creatinine.[2]  Further testing can be performed in consultation with appropriate pediatric specialists such as pediatric endocrinology.

Initial management of the patient with suspected SCFE should begin with strict non-weight bearing (ambulating only with crutches and/or transport via wheelchair).  The clinician should provide adequate analgesia to address the patient's pain.  All patients with suspected or confirmed diagnosis of SCFE should have urgent pediatric orthopedic consultation to determine definitive management, which generally consists of surgical stabilization.  The most common operative treatment for SCFE is in situ screw fixation.  Prophylactic fixation of an unaffected contralateral hip may also be performed in “high risk” patients (e.g., diagnosed the endocrine disorder, age <10 years, obesity with delayed presentation). However, this practice is controversial. [5]

The differential diagnosis of SCFE should include infectious etiologies such as septic arthritis and osteomyelitis, in particular, if the patient is febrile or ill-appearing.  If the onset of pain is reported in the context of a sports injury or other traumatic injury, etiologies such as avulsion fracture of the anterior iliac spine(s), adductor muscle strain, ligamentous knee injury, and femur or pelvic fractures should be considered.  Inflammatory processes such as transient synovitis, Legg-Calve-Perthes disease, and Osgood-Schlatter disease can also be considered in the appropriate clinical context.  However, if the patient has a clinical exam that seems consistent with possible SCFE, even if other clinical features are atypical, the clinician should strongly consider obtaining plain radiographs of the hips.

Patients and their families require instructions on strict non-weight bearing. They will also require counseling on adequate pain control.  If after pediatric orthopedic consultation, urgent operative management is not performed, patients and families should be given anticipatory guidance regarding SCFE, and the need for urgent orthopedic follow up. If there is any concern that the family may be unable or unwilling to follow up with an orthopedic surgeon, admission with pediatric orthopedic consultation should be strongly considered. 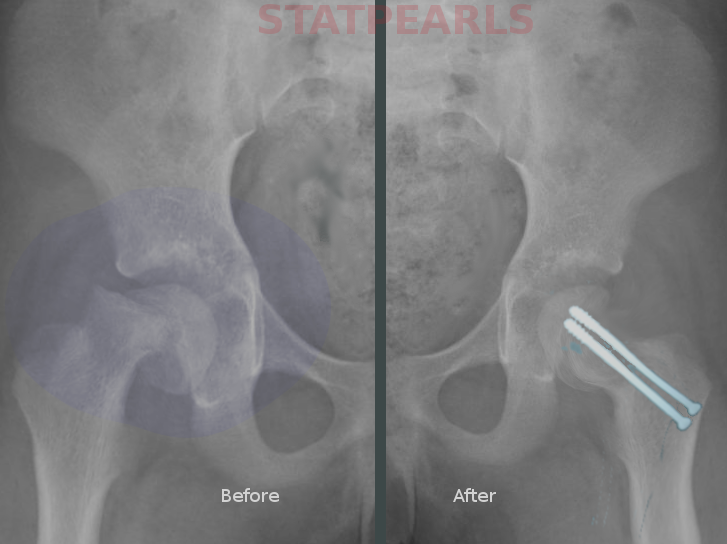 Georgiadis AG,Zaltz I, Slipped capital femoral epiphysis: how to evaluate with a review and update of treatment. Pediatric clinics of North America. 2014 Dec;     [PubMed PMID: 25439015]