A schatzki ring is a circular membrane of mucosa and submucosa that forms at the squamocolumnar junction of the distal esophagus. Schatzki rings appear as thin membranous structures that do not contain any muscularis propria. The upper surface is covered with squamous epithelium and the lower surface is covered with columnar epithelium, Schatski rings are always associated with hiatal hernias. This activity describes the pathophysiology, etiology, presentation, and management of schatzki rings and highlights the role of the interprofessional team in caring for patients with this condition.

Richard Schatzki was a renowned radiologist who described a ring-like structure in patients with dysphagia in articles from 1953 to 1963, and that structure would later bear his name. Schatzki ring is described as a circular membrane of mucosa and submucosa that is seen at the squamocolumnar junction of the distal esophagus. It appears as a thin membranous structure that does not contain any muscularis propria. It has an upper surface that is covered with squamous epithelium and a lower surface that is covered with columnar epithelium and is always associated with a hiatal hernia.[1][2][3]

Schatzki ring is found in 6% to 14% of barium radiographs done routinely. It is noted to be the most common cause of episodic dysphagia for solids and food impactions in adults. There are no known population studies to suggest how common it is among the general population.

As a Schatzki ring develops, it causes narrowing of the distal esophageal lumen that creates an intrinsic mechanical disorder. This will result in symptoms of dysphagia or complications like food impaction when the diameter becomes so small food is unable to pass. The ring does not cause symptoms until it reaches a diameter that obstructs food from passing. Richard Schatski developed the “Schatzki rule” which was that a ring under 13 mm will always have symptoms and a ring larger than 25 mm will always be asymptomatic. In cases where food becomes stuck, patients can develop odynophagia or chest pain.[7][8][9]

As previously described, there is squamous epithelium above the ring and columnar epithelium below it. This differentiates it from esophageal webs, which have squamous (esophageal) epithelium on both sides. In initial studies, it was described as being triangle-shaped on cross section and formed by a core of connective tissue with an overgrowth of muscularis mucosa and smooth muscle fibers creating an annular band.

Most Schatzki rings do not cause symptoms, but the main symptom that does occur is dysphagia and can result in acute dysphagia as a result of food impaction. Symptoms are commonly associated with not very well chewed meat and sometimes described as food sticking in the chest that has been referred to as “Steakhouse syndrome." Symptoms are less commonly associated with globus, which is the sensation of a “lump” or “blockage” between the cricoid and sternal notch. In the case of food impaction, patients can present with odynophagia.

Key questions to ask pertain to the location of discomfort in swallowing, which would be expected to be subxiphoid (lower chest/upper abdominal area), and whether symptoms are worse with solids or liquids or both. The extent of symptoms depends on the diameter of the ring and the largest diameter with symptoms would be less than 25 mm according to the “Schatzki rule.”

Once a patient presents with symptoms suggesting a Schatzki ring, the initial study in evaluation is a barium esophagram. If significant enough, it will show an area of the distal esophagus that is less distensible creating the ring-like structure on radiographic images.  Often, a patient is asked to swallow a substance like a marshmallow or a barium tablet to assess the diameter of the ring. This is often followed by an endoscopy to evaluate the ring, and then treat patients with symptoms. If the finding is incidental and the patient has no symptoms, treatment is not necessary until symptoms occur. However, endoscopy is still recommended to rule out other causes of strictures, especially esophageal malignancy. Biopsies should be performed if there is an irregular z-line at the gastroesophageal junction to assess for Barrett’s esophagus. Biopsies of the ring can be done as a treatment method as well.[10][11]

The goal of treatment is to reduce the diameter of the ring to allow unobstructed passage through the esophagus. Breaking the ring most often does this. Methods of doing so include dilation and/or biopsies of the ring with a biopsy forceps.

There has been evidence that doing four quadrant biopsies with a jumbo forceps will obliterate a Schatzki ring as well. This allows direct visualization of the treatment since it is done during an endoscopy. The whole ring is not broken with biopsies; therefore, there is some concern that the residual tissue may lead to recurrence, a concern that is being studied further.

Often patients are on some type of acid-reducing medication like a proton pump inhibitor (PPI) especially if they have mechanical obliteration of the ring with dilation or biopsy forceps. There is evidence that PPI along with dilation is safe and effective. The effect of PPI alone has been looked at as well in patients with average ring diameters of around 10 mm and can be followed with a barium-pill esophagram reducing the need for procedures and risks of dilation. Duration of treatment is on average 10 months, and the initial study only had nine participants; however, treatment is a consideration for populations of patients that are at high risk for procedures or dilations.

The timing of symptoms is important if there is more progressive dysphagia of solids to eventual liquids. This is concerning for worsening obstruction, and clinicians should have a high suspicion for malignancy. With such an extensive differential, any new-onset dysphagia should be evaluated further, especially to rule out more concerning causes like a malignancy.

Schatzki ring is a benign stricture and when symptomatic can be effectively treated. The patient often does well, and symptoms improve after treatment. Recurrence does occur with rates up to 64% in the first 2 years, hence requiring repeat dilation.

Schatzki ring is managed by dilatation or biopsies. The condition is often managed by the gastroemterologist. However, follow up is necessary by the nurse practitioner and primary care provider as recurrnence rates are high. Most patients need repeat dilatations. 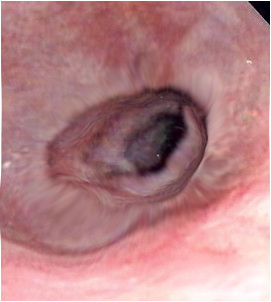 Johnson AC,Lester PD,Johnson S,Sudarsanam D,Dunn D, Esophagogastric ring: why and when we see it, and what it implies: a radiologic-pathologic correlation. Southern medical journal. 1992 Oct;     [PubMed PMID: 1411732]