The scapula is a flat, triangular-shaped bone (colloquially as the "shoulder blade"). It is located in the upper thoracic region on the dorsal surface of the rib cage. It connects with the humerus at the glenohumeral joint as well as the clavicle at the acromioclavicular joint to form the shoulder joint. In total, 17 different muscles attach to the scapula, which makes it difficult to fracture.

The ventral surface of the scapula abuts the thoracic rib cage and has a large concavity called the subscapular fossa where the subscapularis attaches. Three ridges within this fossa allow for tendinous attachment. The dorsal surface divides into two unequal parts via the scapular spine which runs across from the posterior scapula before forming the acromion. Above the spine is the supraspinous fossa and below it is the infraspinous fossa. A ridge runs down the infraspinous fossa near the lateral border from the glenoid cavity to just above the inferior angle. This ridge separates the teres major and minor muscles from the infraspinatus muscle. The spinoglenoid notch connects the two fossae, which is situated under the acromion and is where the suprascapular nerve and artery run on the way to supplying the infraspinatus muscle. The acromion is an oblong continuation of the spine that runs laterally then anteriorly above the supraspinous fossa and is the summit of the shoulder on palpation. The superior border of the scapula extends from the superior angle to the coracoid process. The coracoid process is a hook-like structure that comes off anteriorly from the lateral superior aspect of the ventral side of the scapula. Like the acromion, it is an attachment point for muscles and ligaments.

At the base of the coracoid, there is a notch that is closed off by the superior transverse scapular ligament superiorly, forming a foramen. The suprascapular nerve runs through this foramen while the suprascapular artery runs just above the ligament. The lateral angle of the scapula is the location of the glenoid cavity; this is where the humeral head articulates with the scapula. At the margins of this cavity, a fibrocartilagenous structure called the glenoid labrum acts to deepen the cavity as to accommodate more of the humeral head. Just below the cavity is an impression called the infraglenoid tuberosity where the long head of the triceps brachii originates. The ligaments of the scapula are predominantly named based on the two points they attach. They are the transverse scapular ligament (discussed earlier), coracoacromial ligament, coracoclavicular ligament, coracohumeral ligament, glenohumeral ligaments, and acromioclavicular ligament.

The muscles that attach to the scapula allow it to perform six movements:

As with other bones, the scapula is derived from the embryologic mesoderm. Its osteogenic development beings in week 11 of human embryogenesis. [1]

Venous drainage of the scapula: Primarily via the axillary vein and suprascapular veins

See "Muscles" section for innervations of muscles attached to the scapula.

Os acromiale - Unfused center of secondary ossification in the acromion that may cause pain and tenderness. It is thought to increase the risk of impingement and rotator cuff tears. Initial treatment can be conservative, but surgical excision of the unfused fragment is an option in refractory cases.[2]

Injury causing denervation of the long thoracic nerve leads to paralysis of the serratus anterior, the primary muscle involved in protracting and pulling the scapula toward the rib cage. This weakened protraction allows the rhomboid muscles and the trapezius to work unopposed, leading to retraction of the medial scapula and elevation of the entire scapula. The result is medial winging of the scapula and limitation functionality of the upper extremity. Less commonly, palsy of the trapezius or rhomboids may cause lateral winging. The diagnosis of serratus anterior palsy is easy to make via visualization of the scapula, and the winging can be accentuated by asking the patient is to push against a wall. Treatment is generally conservative, with pain reduction, activity modification, and physical therapy being the mainstays. Twenty-five percent of patients fail conservative treatment and are candidates for surgical reconstruction.

In this syndrome, disruption of the gliding motion of the anterior scapula along the posterior thoracic cage (the scapulothoracic joint) leads to audible and painful crepitus with motion of the scapula. Repetitive use, trauma, osteophyte formation, and bursitis have been suggested as possible etiologies of this syndrome. Conservative treatment is the first option in the majority of cases with successful results. This treatment includes the use of physical therapy to increase the space between the chest wall and scapula, as well as corticosteroid injection or NSAIDs for pain management. Surgical treatment is reserved for refractory cases and involves resecting any lesions in the scapulothoracic joint.

The scapulothoracic joint is disrupted by traumatic injury, leading to lateral displacement of the scapula and damage to nerves and blood vessels. Loss of limb and life are potential outcomes of this injury depending on the extent of neurologic and arterial damage. On exam, swelling of the shoulder, numbness, weakness, and pulselessness in the upper extremity may be present. Radiographs should be taken to determine if there is a fracture of the clavicle or scapula, or if there is detachment in the acromioclavicular or sternoclavicular joints. Surgery is indicated when there is active arterial bleeding, or the limb is at risk of becoming ischemic. Surgery is also required to repair fractures and joint detachments.

This condition is an autosomal dominant muscular dystrophy that affects muscles of the face, humerus, and scapula before moving to the muscles of the trunk and lower extremities. Slowly progressive physical therapy is used to strengthen the muscles while attempting to avoid causing more damage to them. Surgery to stabilize the scapula against the thoracic cage has been shown to improve shoulder function in these patients.

Rotator cuff tendonitis/impingement presents with pain during overhead activities and results from the tendon of the supraspinatus muscle being pinched down by the acromion in most cases. This condition can cause inflammation around the tendon and in the fluid-filled bursae surrounding it. 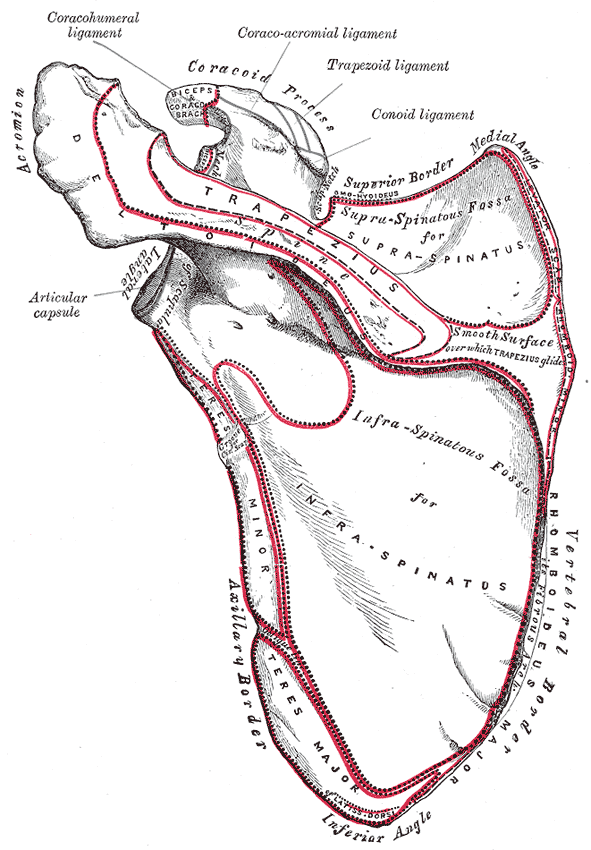