Rhodococcus equi (R. equi), formerly known as Corynebacterium equi, is a rare cause of subacute, necrotizing infection. It mostly causes cavitary pneumonia and lung abscess, especially in immunocompromised hosts. R. equi is best described as a soil organism that is carried in the gut of many herbivores and widespread in animal dung, manures, soils of grazing fields, and other related farm environments. The number of organisms isolated from the air increases with warmer temperatures and is typically highest on dry and windy days. This activity reviews how to properly evaluate for R. equi infections and further steps that should be taken when this pathogen is present. This activity highlights the role of the interprofessional team in caring for patients with this condition.

Human infection due to Rhodococcus equi was first reported in 1967 by a young man on immunosuppressant agents who was working in a stockyard. As the name implies, the infection is closely linked to animals, horses and foal are considered as the natural host. Other species of Rhodococcus similarly described as human pathogens include Rhodococcus fascians, Rhodococcus rhodochrous, and Rhodococcus erythropolis. Rhodococcus belongs to the Nocardiaceae family which also comprises Nocardia, Mycobacterium, Corynebacterium, and Gordonia with some similarities among the group.[1][2]

Immunosuppression, especially defects in cell-mediated immunity, plays a major role in disease and is present in most reported cases even though infection has also been described less commonly in immunocompetent hosts. Common immunocompromised conditions where infection had been described include HIV, solid organ and stem cell transplant recipients, leukemia, lymphoma, lung cancer, and following chemotherapy, monoclonal antibodies, or prolonged steroid use.[3]

The pathogen was referred to as Corynebacterium equi for several decades until 1980 when it was reclassified as the genus Rhodococcus. R. equi is a gram-positive obligate aerobic coccobacillus that is non-motile. It characteristically produces a red pigment, especially in older cultures, but younger cultures tend to have a pale salmon pink color on solid media.[4][5][6][5]

Infection with R. equi has been described in every continent. R. equi is best described as a soil organism that is carried in the gut of many herbivores and widespread in animal dung, manures, soils of grazing fields, and other related farm situations. The number of organisms isolated from the air increases with warmer temperatures and is typically highest on dry and windy days.[7]

Exposure to soil contaminated with herbivore manure is likely the major route of acquisition for both animal and human infection. Humans and animals can acquire the infection by either inhalation or ingestion of contaminated material as well as traumatic inoculation or superinfection of wounds.

Even though horses and foals are traditional hosts, the infection has been described in other animals including sheep, goat, cattle, cats, dogs, and wild birds.

R. equi is a facultative intracellular pathogen that infects macrophage and survives inside lysosomes. The resulting defective intracellular processing leads to necrotizing granulomatous reaction dominated by macrophages filled with granular cytoplasm that is PAS stain-positive and may contain large numbers of gram-positive coccobacillary forms. The necrotizing granulomas may subsequently coalesce to form abscesses.

The clinical presentation depends on the organ/system involved. Pulmonary involvement is most common and seen in up to 80% of all cases. Extrapulmonary involvement is sometimes seen (most commonly brain and skin) and may coincide with a lung infection. In up to 25%, however, an isolated extrapulmonary disease without lung involvement has been reported. Other sites described include joints, eyes, pharynx, middle ear, lymph node, bone, and implanted devices (peritoneal dialysis and intravenous catheters). Hematogenous spread is relatively common, mostly from dissemination from lungs.

The lung infection is typically subacute and presents with cavitation in more than 50% of cases and pleural effusion in approximately 20% of cases. Necrotizing pneumonia is a common presentation which may spread contiguously to surrounding structures, causing empyema, mediastinitis, and bacteremia. Common symptoms include fever, cough, (may/may not be productive) chest pain, weight loss, fatigue, and occasionally hemoptysis which can be severe and require transfusion or pneumonectomy.

The organism is easy to grow from microbiologic cultures, but appropriate clinical suspicion and good coordination and communication between clinician and laboratory personnel are imperative. This is because of the close mimic of Rhodococcus with Tuberculosis, Nocardia, and some Corynebacteria and the relative ease for the laboratory to initially misdiagnose Rhodococcus as one of these. Suitable culture materials include blood, sputum, pleural fluid, abscess aspirate, bronchoalveolar lavage fluid, peritoneal fluid, cerebrospinal fluid, wounds, lymph nodes, and tissue culture from any suspected affected organ.

Since most patients are immunosuppressed, isolation of a gram-positive coccobacillus or acid-fast organisms from an immunocompromised patient with cavitary lung disease should raise the suspicion for R. equi infection. Blood cultures are positive in over 50% of immunocompromised hosts compared with only 10% of normal hosts.

Radiographic features of lung abscess could resemble those of Nocardia and Mycobacterium tuberculosis, but cavitation in tuberculosis are less likely to have air-fluid levels compared to Rhodococcus (See Figure). Also, in patients with AIDS  and tuberculosis, cavitation is less common.

General treatment principles with most Rhodococcus infections are as follows:

For immunocompetent hosts, a single agent may be sufficient such as extended-spectrum macrolide or a fluoroquinolone. For immunocompromised hosts, however, two or more agents, at least one with good macrophage penetration, is preferred. Antibiotic options which should be based on susceptibility results include vancomycin, linezolid, carbapenems, fluoroquinolones, aminoglycosides, macrolides, and rifampin. Central nervous system (CNS) involvement should favor selection of multiple agents with good CNS penetration.[8][9][10][11]

For immunocompromised hosts with a serious infection, treatment is often started with intravenous therapy using two or more agents for 2 to 3 weeks or until clinically improved, followed by oral therapy for a minimum of 2 to 6 months. Oral treatment should be given until symptoms and signs have resolved, and cultures become negative. Definitive therapy is often followed by suppressive therapy until immune reconstitution occurs, especially in AIDS patients. Suppressive therapy could be a combination of rifampin plus either a macrolide, doxycycline, or quinolone. Initiation of antiretroviral therapy should be encouraged in HIV patients with R. equi infection as soon as feasible because restoration of cellular immunity is associated with improved survival.

Adjunctive surgical intervention may be necessary for pulmonary infections. This may include abscess or empyema drainage or even lobectomy if there is a poor response to antibiotics.

R. equi infection, although rare, is recognized as an important cause of cavitary lung infections, especially in the HIV population where mortality could be as high as 50%.

Proven links with horses are not always present, and a few reports and case series have not identified any such associations. It is possible that in these scenarios, other animals (non-horses) could have been implicated, and with suppression of cellular immunity in the host, infection becomes unmasked.

Relapse of Rhodococcus infection after a complete course of therapy has been reported and may occur even on suppressive therapy. Relapse may occur at the same site of the initial infection or a distant site. Linezolid has been used successfully to treat relapse.

In summary, R. equi is a rare cause of subacute, necrotizing infection, mostly cavitary pneumonia and lung abscess, especially in the immunocompromised host. Prompt diagnosis and directed therapy using two or more agents are often necessary for these patient subsets to achieve a favorable outcome.

Rhodococcus infections are rare but they have high morbidity and mortality if the diagnosis is missed. The infection is thus best managed by an interprofessional team that includes the pulmonologist, internist, thoracic surgeon, infectious disease consultant the laboratory specialist. The organism is easy to identify in culture but of more importance is prompt treatment. The pharmacist must ensure compliance with drug therapy because recurrences have been reported when the treatment duration is limited. Patients who are immunocompromised need long term treatment. A few patients may require drainage of the abscess. The infectious disease nurse should follow up on these patients to ensure that recovery is going smooth.[12] 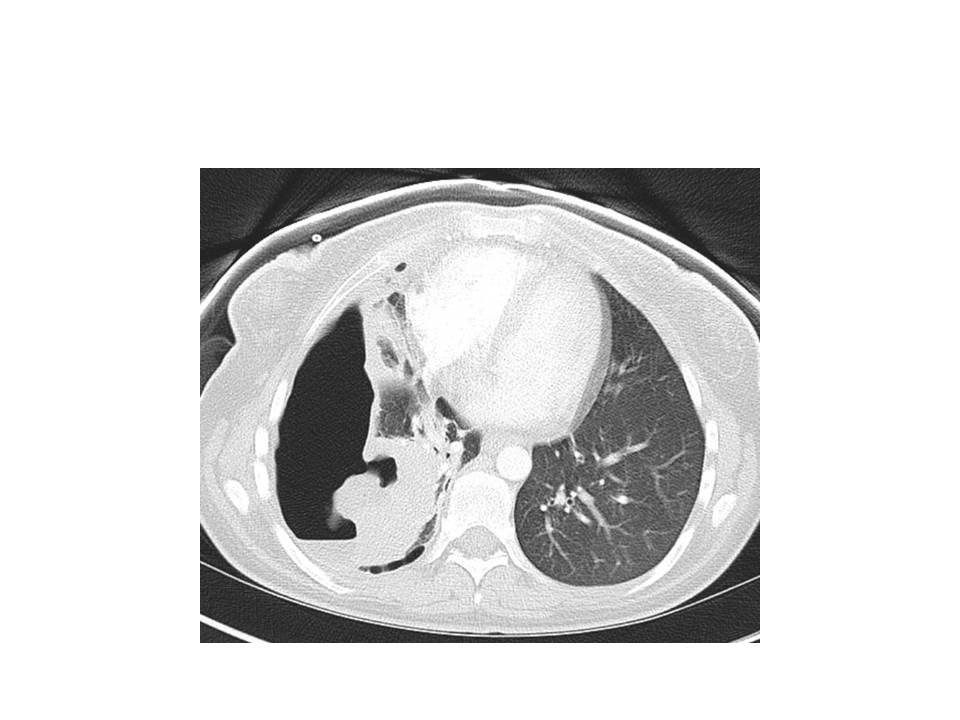 CT chest with contrast showing large right sided cavitary lung lesion with hydropneumothorax and collapsed lung in an AIDS patient due to Rhodococcus equi. The organism was isolated from blood, sputum and pleural fluid.
Contributed by Folusakin Ayoade; (Rhodococcus lung abscess in AIDS)

Gundelly P,Suzuki Y,Ribes JA,Thornton A, Differences in Rhodococcus equi Infections Based on Immune Status and Antibiotic Susceptibility of Clinical Isolates in a Case Series of 12 Patients and Cases in the Literature. BioMed research international. 2016;     [PubMed PMID: 27631004]