Prolactin-secreting tumors of the pituitary gland, also known as prolactinomas, are the most common secretory tumors of the pituitary gland, accounting for up to 40 percent of pituitary adenomas. Prolactinomas can lead to a wide variety of symptoms, either due to mass effect or hypersecretion of prolactin. This activity illustrates the evaluation, treatment, and complications of prolactinomas and the importance of an interprofessional team approach to its management.

Prolactinomas arise from monoclonal expansion of pituitary lactotrophs and are mostly benign, often sharply demarcated without evidence of invasion. A few prolactinomas could behave aggressively with the invasion of surrounding local structures, and they generally have higher mitotic activity and are more cellular and pleomorphic. Distance extracranial involvement is required to be called a malignant prolactinoma. Lateral parts of the anterior pituitary are the most common sites involved with prolactinoma.[5]

Rarely mixed tumors that secrete growth hormone and prolactin, adrenocorticotropic hormone (ACTH), and prolactin or thyroid stimulating hormone (TSH) and prolactin can also be seen, which is recognized with immunohistochemistry.

Microadenomas (smaller than 1 cm) usually are confined to sella turcica and do not cause any compressive symptoms, but macroadenomas (greater than 1 cm) can expand to an adjacent structure like optic chiasm, cavernous sinuses and causes various compressive symptoms like visual field defects, cranial nerve palsy, and headaches. Symptoms of microadenoma are mainly due to elevated levels of prolactin.

Signs and Symptoms Due to Mass Effect

Signs and Symptoms Due to Hyperprolactinemia

Other features like osteopenia, anxiety, depression, fatigue, and emotional instability can be seen in both sexes. About 10% of prolactinomas can be co-secreting growth hormone, so gigantism/acromegaly can be seen in those patients.

An extensive history and physical examination are needed to exclude other causes of hyperprolactinemia and to document any visual field deficits, galactorrhea, growth changes, hypopituitarism, menstrual irregularities, impotence, infertility. Formal visual field testing by an ophthalmologist should be done, especially for macroadenomas. [6][7][8] The following differential diagnosis should be considered during evaluation:

The test begins with serum prolactin level. If the prolactin level is high, a comprehensive metabolic panel, TSH, and a pregnancy test (for women of childbearing age) should be obtained. Assessment of other pituitary hormones, including cortisol, ACTH, IGF-1, LH, FSH, and testosterone/estradiol, should be done based on age and gender to exclude any hypopituitarism or other co-secreting tumors.[9][10][11]

Patients can have very high prolactin levels; however, when measured, they can be reported as falsely low due to a phenomenon called the “Hook effect.” When there is a suspicion, serial dilution of the serum sample and re-measuring the prolactin levels will be helpful.

CT scan may demonstrate the mass, but MRI with gadolinium is the preferred imaging modality for evaluation of hyperprolactinemia as it best describes the anatomy of the hypothalamic-pituitary area. All patients with tumors adjacent to or compressing to optic chiasm should be referred for formal visual field testing.

Macroprolactinomas incidentally discovered without symptoms can be observed with periodic monitoring of the labs and imaging.[12][13]

Macroprolactinoma or symptomatic microadenoma should be treated with dopamine agonist therapy. The goals of treatment would be tumor shrinkage, restoration of visual fields if any defect, reversal of galactorrhea, and restoration of fertility or abnormal sexual function. Cabergoline is preferred due to a higher frequency in normalizing the prolactin level and tumor shrinkage. Amenorrhea caused by macroprolactinoma can be treated with oral contraceptives if fertility is not desired without dopamine agonists.

Most prolactinomas are managed with medical therapy only with surgery and radiotherapy reserved for refractory cases.

Cabergoline and bromocriptine are two commonly used dopamine agonists. Pergolide is withdrawn from the market due to concerns about valvular heart disease, and quinagolide is not available in the United States. Dopamine agonists suppress the synthesis and release of prolactin and lactotroph cellular proliferation, causing shrinkage of the tumor. They can cause nausea and dizziness.

Bromocriptine is preferred during pregnancy if needed due to more available data than cabergoline. It is also cheaper but has more side effects than cabergoline, like nausea, vomiting, nasal stuffiness, and postural hypotension. It is started at 1.25 mg at bedtime or after dinner daily for one week, then increased to 1.25 mg 2 times a day (after breakfast and dinner). The dose should be increased every 4 weeks if the prolactin level is not normalized up to a maximum dose of 5 mg two times a day.  If bromocriptine is unsuccessful, cabergoline should be started.

Treatment with dopamine agonist should be tapered and stopped if prolactin level is normal and the tumor is not visible in MRI after at least two years of treatment.

Transsphenoidal surgery is the preferred surgical option if surgery is indicated for the following reasons:

Usually, in pregnancy, there is hyperplasia of pituitary lactotrophs, and prolactin levels increase. Prolactinomas increase in size during pregnancy, and in patients with known macroadenomas, one can consider surgery before pregnancy, or those on medical therapy should be monitored carefully with periodic visual field testing. Bromocriptine has the largest safety database in pregnancy and is the preferred drug during pregnancy.

Pituitary apoplexy is an endocrine emergency when there is spontaneous hemorrhage into the pituitary adenoma/prolactinoma and patients present with sudden onset headaches and vision changes. Any patient with known prolactinoma/pituitary adenoma presenting with the above symptoms would need an urgent MRI and neurosurgical/endocrine evaluation.

Once a prolactinoma has been diagnosed, patient education is key to preventing high morbidity. All patients must be closely followed, and patients must be educated about the symptoms of prolactinoma and when to seek help. If the decision is made to taper or withdraw medical therapy, the patient must undergo imaging studies periodically to monitor for recurrence of growth. The pharmacist should educate the patient on drugs used to treat prolactinomas and their adverse effects. Finally, the oncology nurse should educate the patient on the possibility of radiation therapy for large lesions and the possibility of hypopituitarism.[14][15] {Level 5]

The majority of patients with microprolactinomas have an excellent prognosis. These patients can be managed medically for extended periods. Macroprolactinomas, on the other hand, can grow over time and require more aggressive treatment. The growth rate of macroprolactinomas is unpredictable, and the patient must be closely followed up. The decision to taper medical therapy requires sound judgment because the tumor can grow in size without treatment. [16] [Level 5] 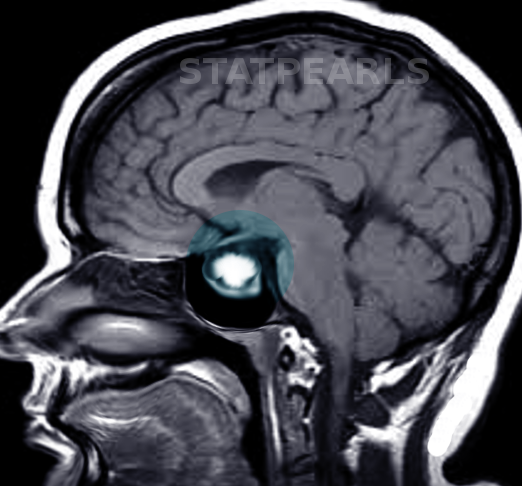