Posterior urethral valves are one of the most common causes of urinary tract obstruction in the pediatric population. They are obstructing membranous folds in the lumen of the posterior part of the urethra and are exclusive to male patients. Posterior urethral valves were first described by Morgagni in 1717 and then by Langenbeck in 1802, who reported valve-like folds in dissected cadavers. Posterior urethral valves can lead to a spectrum of pathology both inside and outside the urinary system. This includes acute retention, chronic kidney disease, and in severe cases, pulmonary hypoplasia secondary to low amniotic fluid levels.

Posterior urethral valves are classically split into three subtypes by Young's criteria according to the orientation of the valves within the urethra.[1]

However, this classification has been challenged. Dewan suggested that types I and III described by Young are the same structure that only appears to be distinct entities following a central defect rupturing antenatally naturally or due to iatrogenic instrumentation.[2] In a subsequent paper, they replaced the term posterior urethral valves with a congenital obstructive posterior urethral membrane (COPUM) and Cobbs collar. The latter is not a valve but a congenital stricture and distinct from COPUM in that it is not associated with the verumontanum.[3]

The lack of microscopic analysis of specimens with posterior urethral valves is a significant limitation in this study. The work by Dewan in the 1990s may unify some of these discrepancies with their “COPUM” and “Cobbs Collar” theories. They concluded that Cobbs collar type malformation is due to the persistence of the urogenital membrane, and COPUM was caused by the attachment of the verumontanum to the urethra’s roof.[3]

Worldwide, a range of figures is quoted for the incidence of posterior urethral valves, with approximately 1:5000 live male births commonly quoted, with 50% progressing to ESRD within ten years.[5]

Worldwide incidence varies; in Australia, a multicenter study found a rate of 1 in 7800 live births in a 5-year retrospective analysis.[7] Whereas a higher incidence of 1 in 3800 is reported in the UK and Ireland.[8]

Posterior urethral valves cause urinary tract obstruction. Depending on the extent of obstruction, posterior urethral valves may be diagnosed antenatally or present after birth with acute urinary retention. The timeliness of diagnosis can affect the lifelong function of the urinary tract. Obstruction caused by posterior urethral valves can lead to hypertrophy of the bladder wall and detrusor muscle. Changes to the bladder can impact compliance and bladder filling as well as raise intravesical pressures. Elevated bladder pressures can be transmitted into the ureters causing vesicoureteric reflux. This, in turn, is associated with infection, incontinence, and progressively impaired renal function. In severe cases, poor urine output can lead to oligohydramnios and, therefore, pulmonary hypoplasia.[9]

Most cases are diagnosed on antenatal ultrasound.[10] Ultrasound findings consistent with posterior urethral valves include bilateral hydroureteronephrosis, dilated prostatic urethra (keyhole sign), and a distended bladder with thickened wall greater than 3 mm, with poor emptying over 30 minutes.[10] Focal renal parenchymal cysts demonstrate renal dysplasia.[11] Other findings include oligohydramnios, fetal ascites, or urinoma.[12] An enlarged fetal bladder on ultrasound may indicate obstruction and reflux but may also be a normal variant, and repeated scans are critical to the accurate antenatal diagnosis of posterior urethral valves.[12]

Neonates with undiagnosed posterior urethral valves can present in a variety of ways. These could be an apparent urinary tract pathology such as delayed voiding, weak stream, urosepsis, or a palpable bladder. However, the presentation may also be more indolent with lethargy, poor feeding, or failure to thrive. In severe cases, they may present with respiratory distress due to pulmonary hypoplasia.[1] Infants and older boys may present with similar complaints to neonates, with either specific urinary symptoms such as urinary retention and urinary tract infection or with secondary symptoms related to sepsis or azotemia (high levels of nitrogen-containing compounds in the blood). In rare instances, urinary ascites can occur following bladder perforation. Posterior urethral valves may also be identified during the workup of renal failure, proteinuria, or hydronephrosis.

Many of the clinical signs in neonates with posterior urethral valves are common to other conditions associated with oligohydramnios caused by compression of the fetus with the uterus. These include indentation of the knees and elbows, skin dimpling, and Potter facies. Other more specific signs include a palpable bladder.[1]

A neurogenic bladder has a keyhole appearance on ultrasound due to the hypotonic neck. Serial scans are essential not only for antenatal diagnosis but for evidence of poor prognostic markers such as low levels of amniotic fluid and evidence of renal dysplasia. Fetal urinary electrolytes and β-2 microglobulin are the most accurate measure of fetal renal function. Physiologically fetal urine should be hypotonic with osmolality less than 210 mEq/L. Raised osmolality and a β-2 microglobulin greater than 4 mg/L are indicative of irreversible renal dysfunction.[12]

Postnatally, investigations can be divided into blood tests, imaging modalities, and urodynamic studies. In the 48h following birth, the neonate's serum biochemistry is primarily determined by the mother's levels, so blood must be taken after this period. Testing serum creatinine, urea, and nitrogen is critical to ascertain the neonate's degree of renal dysfunction. Blood gas testing is of value if the child is unwell to determine if the patient has a metabolic acidosis.[12]

There are no validated criteria for antenatal intervention. However, many advocates for it in cases where posterior urethral valves have been diagnosed by the second trimester with evidence of severe oligohydramnios.[1][12] There is no international agreement on the degree of renal function required for intervention, but evidence of preserved renal function is required. For example the guidance in the United Kingdom advocates for fetal urinary biochemistry of Na less than 100, uCl less than 90, osmolality less than 210 mOsm/L, and β2 microglobulin less than 6 g/L.[14]

Antenatal intervention is associated with significant morbidity and mortality. A single-center case series of 40 patients with 36 of whom underwent antenatal intervention. Five deaths occurred in prematurely born infants with respiratory failure, one termination due to failure of the shunt, and evidence of poor pulmonary and renal function. Of the eight patients surviving to follow up (mean 11.6 years), 5 had chronic kidney disease, with two having already had a renal transplant and one waiting for a transplant.[15]

More recent work suggests some improvement in outcomes with 17 of the 30 patients in the case series undergoing fetal cystoscopy surviving to one year of life, with 13 of those 17 having a normal renal function at that time.[16] Antenatal interventions for posterior urethral valves include vesicoamniotic shunt placement, vesicostomy creation, fetal endoscopic valve ablation, and fetal cystoscopy.

The presentation can vary the intervention required following delivery. If the neonate is initially unwell, they may require correction of electrolytes, specifically hyperkalemia, as well as support for respiratory distress or urosepsis. Following the stabilization of the infant, the bladder may require drainage in the event of acute retention or inability to pass urine. This is usually performed with a soft feeding tube rather than a balloon catheter, which can cause spasm. Cystoscopic valve ablation is the current initial treatment of choice for posterior urethral valves. This will usually alleviate the obstruction, but vesicoureteric reflux will occur in a third.[17]

For patients with vesicoureteric reflux following cystoscopic valve ablation or bladder neck incision, treatment with prophylactic antibiotics resolved this in 66% with this increase up to 94% resolution of vesicoureteric reflux with ureteroneocystostomy.[18] A common complication is a urethral stricture due to trauma associated with instrumentation.[19]

In the case of extremely preterm infants, cystoscopic ablation is often not technically feasible. In these cases, vesicostomy diversion can be performed. Vesicostomy is usually preferable as the more invasive upper urinary tract reconstruction, and associated morbidity and mortality have not demonstrated improved longterm outcomes relative to vesicostomy.[20]

Irrespective of the treatment modality employed, there is a high risk of chronic kidney disease in this patient population, and ongoing monitoring of renal function and obstructive urinary symptoms is required.

The differential diagnosis is:

Prognosis is variable depending on the severity of obstruction and the in-utero sequelae. Most of the infants who survive the neonatal period go on to develop chronic kidney disease (CKD), and many have ongoing bladder dysfunction.  In a series of 75 patients with posterior urethral valves, 21% had end-stage renal failure by the end of the mean follow up of 64 months. 21.4% of patients remained in K/DOQI chronic kidney disease Stage 0, 33.3% Stage 1, 9.5% Stage 2, 7.1% Stage 3 and 28.6% in stage 5, requiring renal replacement therapy.

There were no patients in stage 4 at the time of analysis. They found the following risk factors to be significant for the prognosis of ongoing renal function: renal volume below the third percentile, elevated renal echogenicity, pathological corticomedullary differentiation, over three urinary tract infections with fever, and decreased eGFR at one year of age (P<0.001). In contrast, a renal volume greater than 88.2 ml/m squared body surface area was found to be protective against stage 5 renal failure.[21]

Given the high prevalence of this complication, urodynamic studies are an essential component of the ongoing care of patients with posterior urethral valves. Other studies have shown as many as 41% of patients to be symptomatic with bladder dysfunction, although 42 of the 55 children toilet trained in this study were able to be continent. Both sets of patients were treated with alpha-blockers to lower post-void residual volume if indicated following urodynamic studies.[23]

In a series of 274 patients, all of whom underwent initial treatment in the first 90 days of life at five different hospitals, 16% required renal replacement therapy within ten years. Patients were risk-stratified based on this by the lowest creatinine recorded in the first year.[24]

Due to elevated intravesical pressure, one-third of patients with posterior urethral valves will develop vesicoureteric reflux. It is usually treated with antibiotics to reduce the risk, but alpha-blockers and anticholinergics may be additionally utilized to aid in voiding. In cases with recurrent UTI with renal damage and reflux sufficiently severe to impair bladder emptying, urinary reconstruction may be required. Even in the absence of vesicoureteric reflux, recurrent infections with high post-void residual volumes may cause stagnant urine, which is more prone to infection. Recurrent urinary tract infections may be exacerbated in cases with dilated upper urinary tracts.[1]

Many of the complications of posterior urethral valves continue to develop despite initial valve ablation. Patients will require clean intermittent catheterization, which parents and later children need to be taught to do at home, and patient education is key to optimizing ongoing outcomes in chronic kidney disease. Educating patients about their condition and empowering them to advocate for themselves is good practice in the management of any long-term health.[25]

Posterior urethral valves are a complicated condition causing a range of pathology across organ systems at different stages in life, requiring different approaches from the healthcare team. The diagnosis of posterior urethral valves requires a multidisciplinary approach. The presentation based on presenting age or previous management history may range from an unwell neonate with pulmonary hypoplasia and urinary retention to managing chronic kidney disease in children in the community. A critical step is transitioning from pediatric to adult services, and effective handover of care is associated with improved long-term outcomes.[26] 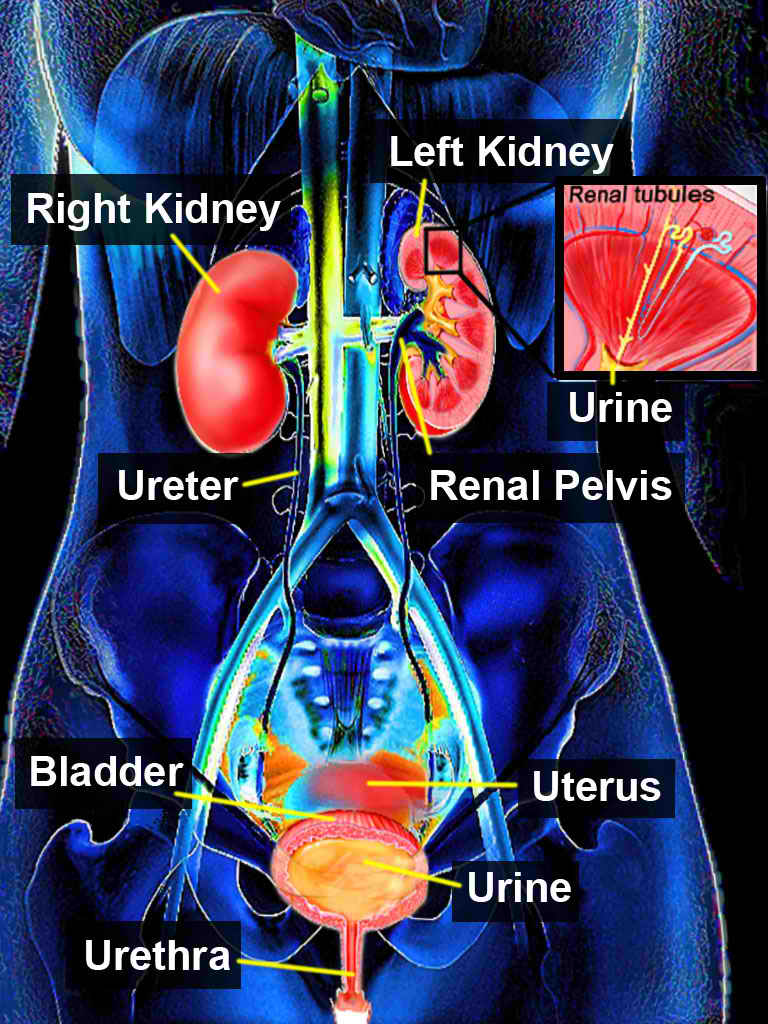 STEPHENS FD, Urethral obstruction in childhood; the use of urethrography in diagnosis. The Australian and New Zealand journal of surgery. 1955 Nov;     [PubMed PMID: 13269355]