Pityriasis rosea, also known as pityriasis circinata, roseola annulata, and herpes tonsurans maculosus is an acute self-limiting papulosquamous disorder. It is often characterized by an initial herald patch, followed by scaly oval patches within 2 weeks. However, the herald patch is not always present. The scaly oval patches typically distribute in a Christmas-tree pattern on the trunk and proximal extremities. This activity reviews the evaluation and treatment of pityriasis rosea and the importance of the interprofessional team in recognizing and managing patients with this condition.

The exact cause of pityriasis rosea is not known, but features like seasonal variation and clustering in communities suggest that it is an infectious disease. Infections like viruses, bacteria, spirochetes, and noninfective causes like atopy and autoimmunity are known causes. Upper respiratory tract infections that precede pityriasis rosea suggest a role of Streptococcus. Recently, reactivation of latent human herpesvirus-6 and human herpesvirus-7 infection have been found as the possible etiologic agents. Pityriasis rosea-like eruptions have been reported after vaccinations such as Bacillus Calmette-Guerin (BCG), influenza, H1N1, diphtheria, smallpox, hepatitis B, and Pneumococcus. Eruptions have also been seen with drugs like gold, captopril, barbiturates, D-penicillamine, and clonidine. In temperate regions, it is more common in the winter season, while in tropical areas some seasonal variation is noted.[4][5][6]

The approximate incidence of pityriasis rosea is 0.5% to 2%. It affects people of both genders, typically between 15 and 30 years of age, but it also affects older adults and children.[7]

A lack of natural killer (NK) cell and B-cell activity in pityriasis rosea lesions has been noted, suggesting a predominantly T-cell mediated immunity. Increased amounts of CD4 T-cells and Langerhans cells are present in the dermis, possibly reflecting viral antigen processing and presentation. Anti-immunoglobulin M (IgM) keratinocytes have been found in patients with pityriasis rosea. This may be associated with the exanthem phase of viral infection.

Skin biopsy is not necessary but if performed will reveal non-specific features similar to those seen in chronic dermatitis.

Pityriasis rosea is clinically characterized by a herald patch or mother patch followed by scaly oval plaques on the trunk and proximal extremities along the Langer’s lines of cleavage giving characteristic “Christmas-tree" appearance. Collarette scaling is common. The eruption is usually preceded by a prodrome of a sore throat, gastrointestinal disturbance, fever, and arthralgia.

Pruritus is severe in 25% of cases. Herald patch is seen in 50% to 90% cases and is located on the trunk followed by the neck or proximal extremity.

A generalized eruption then occurs, in which numerous lesions develop in crops over a period of one to two weeks after the onset of the herald patch. The eruptions are symmetric and most commonly involve the thorax, back, abdomen, and adjoining areas of the neck and extremities. These secondary lesions occur as macules and papules that are elliptical or ovular in shape. Fine scaling and central wrinkling, with a cigarette paper aspect, are seen. A characteristic feature is the collarette appearance of the scale, with edges peripherally attached and lifted up near the center of the lesion. The distribution of the lesions is usually bilateral and diffuse, with the long axis running parallel to skin tension lines.

The incidence of atypical pityriasis rosea is 20% which may be in regard to morphology, size, distribution, course, or symptoms.

The various atypical morphologies include:

Dermatoscopy helps to differentiate pityriasis rosea from other conditions. It shows a yellowish background color, a peripheral arrangement of the scales, and a patchy distribution of loosely arranged dotted vessels.

Histopathology shows superficial perivascular dermatitis. Focal parakeratosis in mounds, hyperplasia, and focal spongiosis are observed in the epidermis. The epidermis may show exocytosis of lymphocytes, variable spongiosis, mild acanthosis, and a thinned granular layer. Extravasated red blood cells along with a perivascular infiltrate of lymphocytes, histiocytes, and eosinophils are seen in the dermis.[2][8][9]

Pityriasis rosea is a self-limiting, exanthematous disease. Most patients need emollients, antihistaminics, and topical steroids. Macrolides and acyclovir lead to faster resolution of lesions and help to relieve pruritus. Narrowband ultraviolet B therapy is also used. It works by altering the immune response in the skin.[10]

Atopy is associated with pityriasis rosea. Pityriasis rosea during pregnancy, within the first 15 weeks of gestation, may cause premature delivery and fetal demise.

In the majority of patients, pityriasis is a self-limited condition with an excellent prognosis. However, about 2-3% of patients will experience a recurrence. The skin disorder is benign, non-contagious and does not require any special precautions. Since the majority of patients first present to their primary care provider when the skin lesions appear, it is important for the nurse, pharmacist and primary care provider to educate the patient that the condition is benign and will not last for more than 2 months. For cases that are severe, a dermatology referral should be made. The biggest morbidity is due to pigmentation changes, especially in dark-skinned individuals. However, scarring does not occur. There are reports that pityriasis during pregnancy may be associated with premature birth- but it is not known if this is just a coincidental observation. Patients should be told to avoid applying irritants to the skin and avoid tanning. The itching is mild and usually resolves with a moisturizer. Exposure to the sun may induce pigmentary changes and should be avoided. [11][12] (Level V) 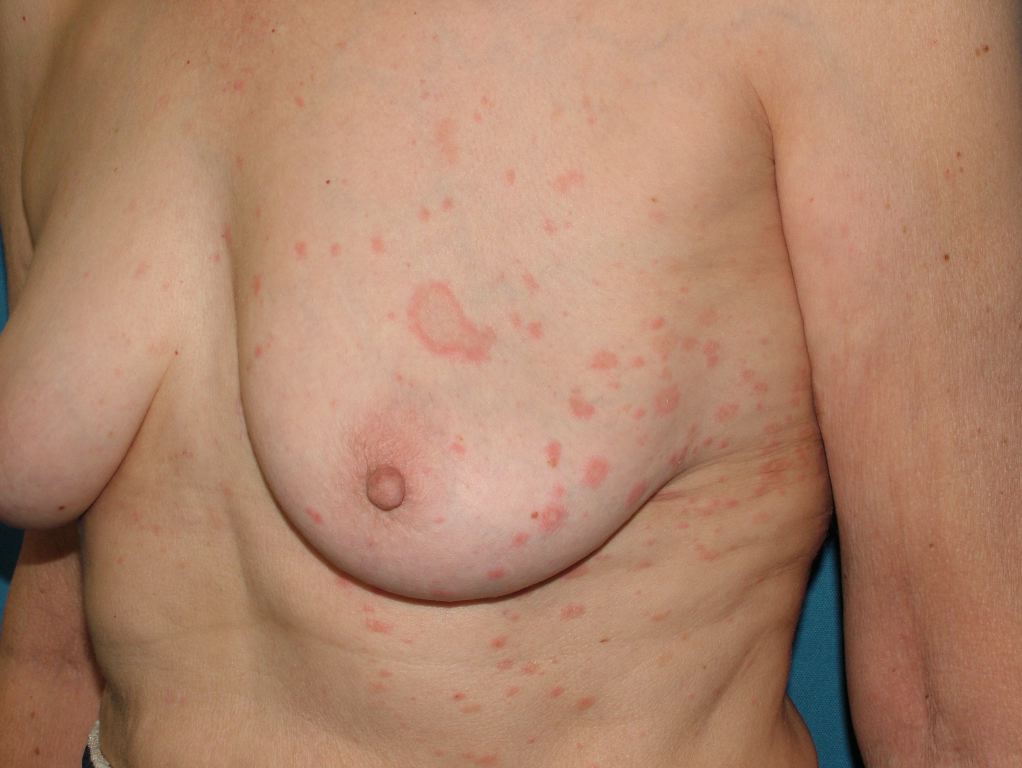 Krishnamurthy K,Walker A,Gropper CA,Hoffman C, To treat or not to treat? Management of guttate psoriasis and pityriasis rosea in patients with evidence of group A Streptococcal infection. Journal of drugs in dermatology : JDD. 2010 Mar     [PubMed PMID: 20232586]