The 2 main functions of the penis are intercourse and urination. For intercourse, the penis must be erect. Erection occurs via parasympathetic innervation which allows engorgement of the corporal bodies. The bulbospongiosus and ischiocavernosus muscle compress the veins to prevent them from draining blood from the corpora cavernosa. The erectile tissue of the cavernosum becomes firm and enlarged when the erection occurs. The emission phase is due to the sympathetic response and occurs when semen exits the vas deferens to the ejaculatory ducts where fluid from the seminal glands are added. They then continue onto the prostatic urethra where the prostatic fluid is added. The ejaculation phase is due to the sympathetic response and is when semen exits from the urethra through the external urethral orifice. After ejaculation, the penis becomes flaccid again due to the sympathetic stimulation and constriction of the coiled helicine arteries and relaxation of the bulbospongiosus and ischiocavernosus muscles allowing blood to drain from the cavernous spaces.[5][6][7]

The other function of the penis is to drain urine from the body. Urine starts draining from the bladder into the bladder neck where the internal urethral sphincter will relax to allow urine to pass via involuntary control of the parasympathetic system. Urine will then pass into the prostatic urethra and the membranous urethra. The external sphincter will relax to allow urine to pass from the membranous urethra into the spongy penile urethra, then into the navicular fossa and out of the urethra through the external urethral orifice.

The penis innervation is from spinal cord segments of the S2 to S4.  These cord segments pass through the pelvic splanchnic nerves.  The spinal ganglia of S2 to S4 passes through the pudendal nerves.  The dorsal nerve provides sympathetic plus sensory innervation to the penis.  The pudendal nerve branches to become the dorsal nerve of the penis.  The nerve runs next to the dorsal artery and supplies the skin and glans penis also.  The glans penis has a copious amount of sensory nerve endings.  The root of the penis has innervation from the ilioinguinal nerve.  The cavernous nerves have parasympathetic fibers that innervate the helicine arteries which supply erectile tissue.

Hypospadias is a fairly common physiologic variant. The external urethral orifice opens on the ventral portion of the glans penis or the body of the penis. This is due to a failure of the urogenital folds to fuse correctly. This causes urine to be excreted through this opening instead of the external urethral meatus. Epispadias occurs less commonly and is a result of urethral meatus which is found on the dorsal side of the penis. Epispadia is most commonly associated with bladder exstrophy. Phimosis is when the prepuce fits too tightly over the glans and cannot be retracted. Micropenis is when the penis is 2.5 standard deviations below the mean in length measured along the dorsal surface from the pubis to the tip of the penis stretched. It is thought to be due to insufficient androgen stimulation during the fetal period. Chordee is another congenital anomaly that is fairly common. Chordee is the downward curvature of the head of the penis that occurs during the fetal period. This curvature is most notable during an erection. Some patients with chordee may also have hypospadias, but this is not always the case. Chordee is usually not painful and may be treated with minor surgery.[8][9][10]

Erectile dysfunction (ED), the inability to get or maintain an erection, is the most common penile disorder. This can be due to either psychological stress, organic disease, or a combination of both. Risk factors associated with erectile dysfunction include obesity, smoking, atherosclerotic disease, decreased activity, obstructive sleep apnea, diabetes, drugs as well as many other causes. Antidepressants and antihypertensive drugs are common drugs which lead to erectile dysfunction. The most common cause of erectile dysfunction is vascular issues. Thus the first line therapy is usually phosphodiesterase-5 inhibitors, such as sildenafil, vardenafil, and tadalafil. They work by increasing nitric oxide-induced vasodilation by increasing the cyclic guanosine monophosphate (GMP) levels. Phosphodiesterase inhibitors are contraindicated in patients taking nitrates due to vasodilatory effects of both drugs, which can lead to severe hypotension. Lifestyle modifications are usually indicated for the treatment of erectile dysfunction also. Weight loss, physical activity, and smoking cessation can improve erectile function. If initial therapy fails, there are second-line therapies such as vacuum-assisted mechanical devices, penile injections with alprostadil, or penile prosthesis.

Peyronie disease is an abnormal curvature of the penis that is normally a benign condition but may be associated with painful erections or erectile dysfunction. The condition can resolve spontaneously, become stable, or worse. The underlying pathogenesis of Peyronie disease is not known. However, it is believed that repeated microtrauma to the penis leads to fibrin deposition due to microvascular injury.  The fibrous plaques contain excessive collagen that causes focal inelasticity leading to the curvature of the penis. Several conditions have been associated with Peyronie disease such as Paget disease and Dupuytren contracture. The diagnosis of Peyronie disease is usually a clinical diagnosis, but imaging may be helpful. Current medical management of oral therapy for Peyronie disease include pentoxifylline, vitamin E, potassium para-aminobenzoate, colchicine, tamoxifen, and carnitine. Pentoxifylline is usually the first-line therapy. Intralesional drug therapy includes verapamil, interferon alfa-2b, and collagenase. Other treatments include penile traction therapy, iontophoresis, extracorporeal shockwave therapy, surgical straightening procedures, penile prosthesis placement, and radiation. 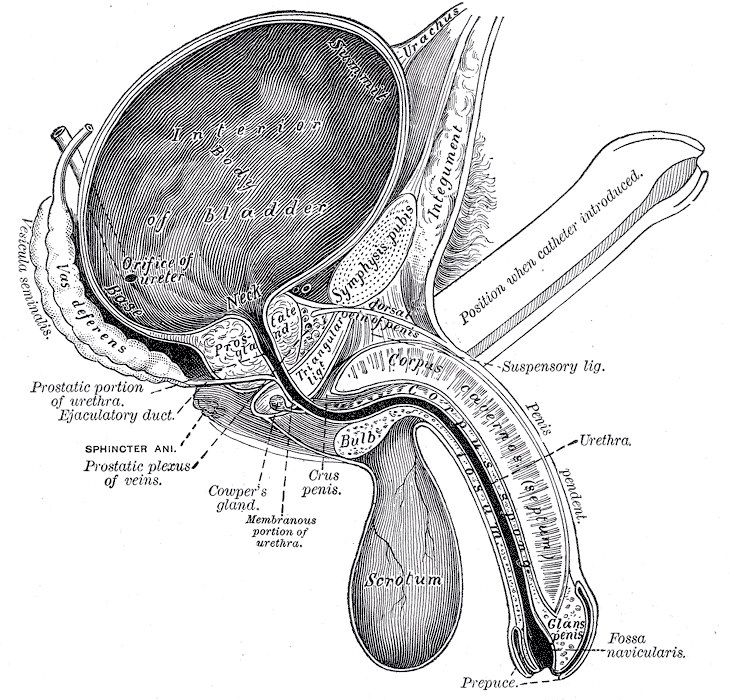 The Penis, Diagram of the arteries of the penis, Corpus Cavernosum, Glans penis, bulbous branch
Contributed by Gray's Anatomy Plates 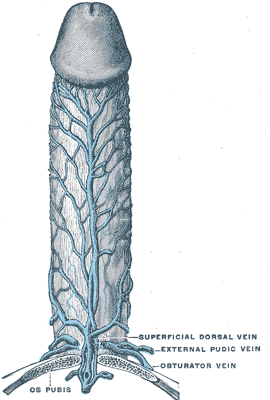 The Penis, Veins of the penis
Contributed by Gray's Anatomy Plates