The nasal cavity is a roughly cylindrical, midline airway passage that extends from the nasal ala anteriorly to the choana posteriorly.[1] It is divided in the midline by the nasal septum. On each side, it is flanked by the maxillary sinuses and roofed by the frontal, ethmoid, and sphenoid sinuses in an anterior to posterior fashion.[1] While seemingly simple, sinonasal anatomy is composed of intricate and subdivided air passages and drainage pathways that connect the sinuses.

The function of the paranasal sinuses is debated. However, they are believed to be implicated in several roles: decreasing the relative weight of the skull, increasing the resonance of the voice, providing a buffer against facial trauma, insulating sensitive structures from rapid temperature fluctuations in the nose, and humidifying and heating inspired air. Furthermore, they also play a role in immunological defense.

They are three to four bony shelves covered by erectile mucosa that increase the interior surface area.

The uncinate process is a delicate, sickle-shaped, bony part of the ethmoid bone, covered by mucoperiosteum, medial to the ethmoid infundibulum, and lateral to the middle turbinate. Its anterior attachment corresponds to the lacrimal bone, and its inferior one corresponds to the ethmoidal process of the inferior turbinate and the perpendicular process of the palatine bone.[3] The superior attachment can be inconsistent.[3]

The ethmoid infundibulum is a pyramidal space that facilitates the drainage of the maxillary, anterior ethmoid, and frontal sinuses.[4] The superior attachment of the uncinate process determines the spatial relationship of the frontal sinus drainage.

The semilunar hiatus is the gap that empties the ethmoid infundibulum located between the uncinate process and the ethmoid bulla.

The osteomeatal complex is a lateral nasal wall region that drains the anterior ethmoid cells and the maxillary and frontal sinuses,[4] located lateral to the middle turbinate. It is not a discrete anatomic structure but a collection of several components, including anterior ethmoid air cells, maxillary sinus ostium, ethmoid infundibulum, frontal recess, the middle meatus, the hiatus semilunaris, the bulla ethmoidalis, and the uncinate process.[4][3][4]

The nasal fontanelles are described as an area of the lateral nasal wall where no bone exists. The natural ostium of the maxillary sinus is located in the anterior fontanelle.

The medial wall separates the maxillary sinus from the nasal cavity, but they communicate throughout the ostium, located in the medial wall inferior or at the same level of the orbit floor.[9]

Mucus-producing ciliated pseudostratified columnar epithelium lines the maxillary sinus, which lacks periosteum. The cilia have the heavy task of draining the mucous into the ostium (located superiorly in the medial wall), and they are more numerous near the ostium.[2]

The frontal sinus is a highly variable air-filled anatomical structure located superior to the orbit and within the frontal bone. Its shape and size depend on climate and ethnicity but is more or less pyramidal in adults, [13] and the typical volume is 4 to 7 mL.

The frontal recess is the space posterior to the frontal beak into which the frontal sinus drains.[15] It is anteriorly bounded by the posterior wall of the agger nasi cell, laterally by the lamina papyracea, and medially by the middle turbinate.[15][4][15]

Several cells cover this space and influence the direction of the drainage outflow.[15] The frontal recess is a common site of infection, and its surgical approach is known to be challenging.[4] The recess can open into the middle meatus in more than half of individuals or into the ethmoid infundibulum in the rest.[4]

Frontal cells are anterior ethmoid cells that pneumatize the frontal recess. These cells may cause obstruction or persistent sinus disease. They are located posterior and superior to the agger nasi cell, and Bent and Kuhn classify them into four types according to their relation to the agger nasi cell and the orbit's roof.

Type I: Single cell above the agger nasi cell.[16]

Type II: Multiple cells above the agger nasi, and below the orbit's roof.[16]

Type III: Single large cell that extends supraorbitally through the floor of the frontal sinus, attaches to the anterior table, and stays contiguous to the agger nasi cell.[16]

Type IV: Single isolated cell that is contained within the frontal sinus.[16]

The sphenoid sinus is located centrally and posteriorly within the body of the sphenoid bone,[17] and it is posteriorly and superiorly bounded by the sella turcica. The sphenoid sinus, present only in humans and primates,[17] can be identified in radiographs from the age of two.[18] It keeps developing throughout life but matures in size at around 12 to 14 years of age.[17] The typical adult size is 0.5 to 8 mL. Several important structures have a close relation to the sphenoid sinus, including the internal carotid artery and the optic nerve.[19]

The carotid artery is located adjacent to the lateral wall of the sinus, and in 25% of patients, it is dehiscent in this area. The optic nerve leaves an anteroposterior indentation on the roof of the sphenoid, and the overlying bone can be dehiscent in around 4% of individuals.[19] The sphenoid sinus is also adjacent to the cavernous sinus and hypophysial gland.[17]The patterns of the sphenoidal sinus pneumatization were classified into conchal, pre-sellar, and sellar, depending on the extension of pneumatization concerning the sella turcica. But, Štokovic et al. added a fourth type – post-sellar.[20] The sphenoid ostium drains into the sphenoethmoidal recess located within the superior meatus.

The ethmoid bone is formed by a multitude of cells with an intricated structure, through which all the paranasal sinuses drain.[21] There are 3 to 4 ethmoid air cells at birth that develop into 5 to 15 paired cells by adulthood with a total volume of 2 to 3 mL. They are located between the eyes, on either side of the septum.

The complex ethmoidal labyrinth can be reduced into a series of lamellae based on embryologic precursors. These lamellae are obliquely oriented and lie parallel to each other.

Paranasal sinuses' development is heralded by the appearance of a series of folds on the lateral nasal wall at approximately the eighth week of gestation, known as the ethmoturbinals. Six to seven folds emerge initially, but eventually, only three to four persist through regression and fusion.

As development progresses, furrows form between these ethmoturbinals, which establishes rudimentary meati and recesses.

The sphenoid sinus develops during the third month of gestation. During this time, the nasal mucosa invaginates into the posterior portion of the cartilaginous nasal capsule to form a pouch-like cavity. The wall surrounding this cartilage is ossified in the later months of fetal development. Then, during the second and third years of life, the cartilage is resorbed, and the cavity becomes attached to the body of the sphenoid.

The ethmoid sinuses are comprised of three to four air cells at birth. By the time an individual reaches adulthood, they consist of 1 to 15 aerated cells.

The maxillary sinus’ innervation is provided by branches of the maxillary nerve: middle, anterior, and posterior superior alveolar nerves, and infraorbital nerve.[2]

The sphenopalatine artery supplies the sphenoid sinus, and venous drainage is via the maxillary vein.

The ethmoid sinuses are supplied by the anterior and posterior ethmoid arteries, respectively. These arteries are branches of the ophthalmic artery, a branch of the internal carotid artery. Ethmoid sinus venous drainage is done by the maxillary and ethmoid veins.

The maxillary sinus' innervation is provided by branches of the maxillary nerve: middle, anterior, and posterior superior alveolar nerves, and infraorbital nerve.[2] The sphenoid sinus' innervation is provided by the sphenopalatine nerve, which comprises parasympathetic fibers and CN V2. The frontal sinus is innervated by the supraorbital and supratrochlear nerves (CNV1). The anterior and posterior ethmoid nerves provide innervation to ethmoid sinuses.

The frontalis muscle runs over the frontal skull and sinus region and is part of the mechanism of facial expression. The levator muscles of the lips are anchored over the maxillary sinuses. The zygomatic projection of the maxilla is part of the anchorage of the masseter muscle, a powerful closure of the jaw.

Nasal anatomy differs significantly among individuals; certain anatomic variations are relatively common. The variations may contribute to mechanical obstruction of the osteomeatal complex leading to rhinosinusitis.

The nasal septal deviation is an asymmetric bowing of the nasal cartilaginous septum. Such bowing may compress the middle turbinate in a lateral fashion, which may lead to narrowing of the middle meatus. This variation is often congenital, but may also be secondary to nasal trauma.

The middle turbinate usually curves medially toward the nasal septum. However, when the turbinate curves laterally, the resultant anatomic variant is known as a paradoxical middle turbinate. Such a variant can narrow or obstruct the nasal cavity, middle meatus, or infundibulum.

Haller cells are ethmoid air cells that extend laterally over the medial aspect of the roof of the maxillary sinus. If large enough, they may cause narrowing of the infundibulum. Onodi cells are lateral and posterior extensions of the posterior ethmoid cells. Horizontal septations around the sphenoid sinus delineate them. Importantly, these cells may surround the optic nerve tract, which can increase the risk of injury to the optic nerve during surgery.

Lastly, the height of the ethmoid roof can vary between patients and vary between each side in the same patient. When there is asymmetry of ethmoid roof height in a patient, the risk of intracranial penetration during FESS is higher.

These are only a few of the anatomic variations seen in sinonasal anatomy. While they represent the most common variations, the importance of having a sound understanding of the tridimensional anatomy is paramount to safe and effective endoscopic sinus surgery.

Paranasal sinuses are prone to inflammation and infection. The mucus drainage is interrupted when the paranasal sinuses become blocked from secretions or a mass, causing sinusitis. Depending on the cause, sinusitis is treated with corticosteroids, decongestants, nasal irrigation, and hydration. Rarely surgical intervention is required to enhance drainage.

Malignancies of the paranasal sinuses are rare. The majority of cancers occur in the maxillary sinus and are more common in men than women. Maxillary sinus malignancies occur between ages 45 to 70, and the most frequent is a sarcoma. Even though metastases are rare, these malignancies are locally invasive and destructive. Diagnosis in most cases is delayed, and the prognosis is poor. 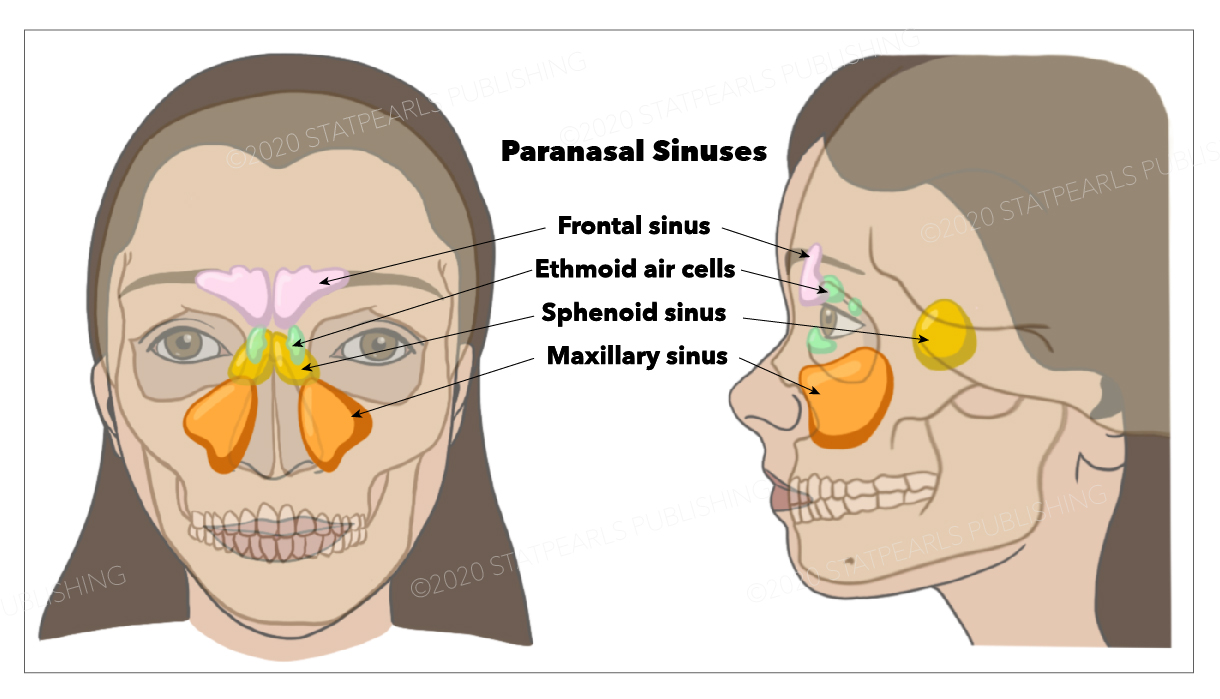 Krennmair G,Ulm CW,Lugmayr H,Solar P, The incidence, location, and height of maxillary sinus septa in the edentulous and dentate maxilla. Journal of oral and maxillofacial surgery : official journal of the American Association of Oral and Maxillofacial Surgeons. 1999 Jun;     [PubMed PMID: 10368090]