The pancreas is an extended, accessory digestive gland that is found retroperitoneally, crossing the bodies of the L1 and L2 vertebra on the posterior abdominal wall. The pancreas lies transversely in the upper abdomen between the duodenum on the right and the spleen on the left. It is divided into the head, neck, body and the tail. The head lies on the inferior vena cava and renal vein and is surrounded by the C loop of the duodenum. The tail of the pancreas extends up to splenic hilum. The pancreas produces an exocrine secretion (pancreatic juice from the acinar cells) which then enters the duodenum through the main and accessory pancreatic ducts and endocrine secretions (glucagon and insulin from the pancreatic islets of Langerhans) that enter the blood.

The pancreas is divided into 4 parts: head, neck, body, and tail.

Majority of the pancreas (approximately 80%) is made up of the exocrine pancreatic issue. This is made of pancreatic acini (pyramidal acinar cells with the apex directed towards the lumen). These contain dense zymogen granules in the apical region, whereas the basal region contains the nucleus and endoplasmic reticulum (which aids in synthesizing the digestive enzymes). These enzymes are stored in secretory vesicles called the Golgi complex. The basolateral membrane of the acinar cells contains several receptors for neurotransmitters including secretin, cholecystokinin, acetylcholine, which regulate exocytosis of the digestive enzymes.

Stellate cells are a direct formation of epithelial structures within the pancreas. In conditions like chronic pancreatitis, these cells promote inflammation and fibrosis.

The pancreas develops from the posterior foregut endoderm. At about 4 weeks gestation, this endoderm first gives rise to dorsal and ventral buds which gradually elongate [1]. Around week 6, the ventral bud rotates around the then developing duodenum and eventually fuses with the dorsal bud at about 17th week of gestation to form the pancreas. The dorsal bud thus forms the upper part of the pancreatic head, the body, and the tail whereas the ventral bud forms the lower part of the pancreas and the uncinate process.

Branches of the splenic artery (a branch of the celiac trunk), superior mesenteric artery (SMA), and the common hepatic artery provide blood supply to the pancreas [2][3].

The SMV and splenic vein merge to form the portal vein.

The pancreas has a complex network of parasympathetic, sympathetic, and sensory innervations [4]. It also has an intrinsic nerve plexus. Sympathetic and parasympathetic fibers are dispersed to pancreatic acinar cells. The parasympathetic fibers arise from the posterior vagal trunk and are secretomotor, but the secretions from the pancreas are predominantly mediated by cholecystokinin and secretin, which are hormones produced by the epithelial cells of the duodenum and proximal intestinal mucosa regulated by acidic compounds from the stomach. Sympathetic innervation is via the T6-T10 thoracic splanchnic nerves and the celiac plexus.

Annular pancreas results when the ventral bud fails to rotate completely during development [5]. This may occur due to certain autosomal recessive mutations. Patients usually present in infancy with a bowel obstruction (complete or partial). There is often a history of maternal polyhydramnios. Annular pancreas is often associated with other anomalies including Trisomy 21, tracheoesophageal fistula (VACTERL), malrotation, cardiac or renal abnormalities. The annular pancreas can be associated with pancreatitis as well. This condition is usually treated with duodenojejunostomy.

Choledochal cysts are dilations of the biliary tract. This usually presents as jaundice and abdominal pain. Fever can be seen in some cases. Laboratory evaluation will demonstrate elevated direct bilirubin levels, with normal transaminases. The condition is usually diagnosis via imaging: ultrasonography, CT, HIDA scan, or MRCP.

Perforation of the pancreas results in secretion of digestive enzymes such as amylase and lipase into the abdominal cavity and pancreatic self-digestion. While it is possible to remove the pancreas surgically, the individual will face a lifetime of blood glucose regulation and pancreatic enzyme supplements needed to aid digestion.

Pancreatic cancers, particularly pancreatic adenocarcinoma, are very difficult to treat and are usually diagnosed at a stage too late for surgery. Pancreatic cancer is rare in younger patients, the median age of diagnosis is 71. Risk factors include smoking, obesity, diabetes, and multiple endocrine neoplasia type 1 and hereditary nonpolyposis colon cancer.

Diabetes mellitus type 2 is the most common form of diabetes. The disease causes high blood sugar usually due to a combination of insulin resistance and impaired insulin secretion. Treatment includes changes in diet and physical activity as well as biguanides such as metformin.

Pancreatic inflammation is known as pancreatitis. It is associated with recurrent gallstones, alcohol use, measles, mumps, medications, alpha-1 antitrypsin deficiency, and scorpion stings.

Pancreatitis causes intense pain in the central abdomen that radiates to the back. It may be associated with jaundice. Pancreatitis often presents with pale stools and dark urine. 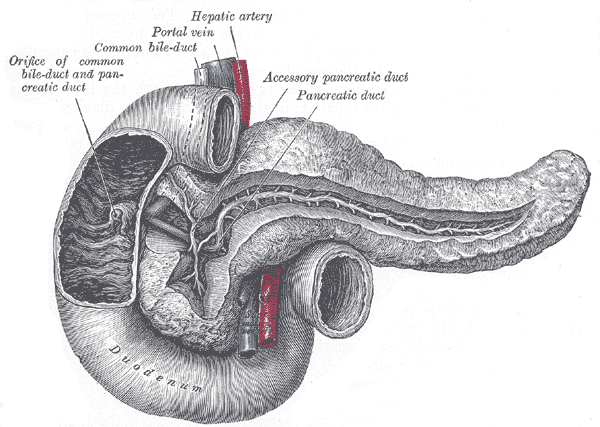 Lewis MP,Reber HA,Ashley SW, Pancreatic blood flow and its role in the pathophysiology of pancreatitis. The Journal of surgical research. 1998 Feb 15     [PubMed PMID: 9614861]