Otitis externa (OE) is an inflammation, that can be either infectious or non-infectious, of the external auditory canal. In some cases, inflammation can extend to the outer ear, such as the pinna or tragus. OE can be classified as acute, lasting less than 6 weeks, or chronic which lasts more than 3 months. This activity outlines the evaluation and management of otitis externa and highlights the role of the interprofessional team in the care of patients with this condition.

Otitis externa (OE) is an inflammation, that can be either infectious or non-infectious, of the external auditory canal. In some cases, inflammation can extend to the outer ear, such as the pinna or tragus. OE can be classified as acute (lasts less than 6 weeks) or chronic (lasts more than 3 months). It is also known as swimmer's ear as it often occurs during the summer and in tropical climates and having retained water in the ears increases the risk for it. The most common cause of acute otitis externa is a bacterial infection. It may be associated with allergies, eczema, and psoriasis.

Pseudomonas aeruginosa and Staphylococcus aureus are the most common pathogens involved in otitis externa. Otitis externa can also occur as a polymicrobial infection, and rarely, it may result from a fungal infection such as Candida or Aspergillus. Various factors can predispose patients to the development of OE. Swimming is one of the most common risk factors, and it increases the risk five times when compared to non-swimmers. Other risk factors include:[1]

Otitis externa is a common condition and can occur in all age groups. It is uncommon in patients younger than 2 years old.[2][3] Its incidence is unknown, but it peaks around the age of 7-14. Approximately 10% of people will develop otitis externa during their lifetime, and the majority of cases (95%) are acute. There is no gender predominance. The majority of cases occur during the summer and in tropical climates; it is possibly related to increased humidity.[1]

The external auditory canal is covered by hair follicles and cerumen-producing glands. Cerumen provides a protective barrier and an acidic environment that inhibits bacterial and fungal growth.[4] The inflammatory response in otitis externa is believed to be caused by a disruption of the normal pH and protective factors within the auditory canal.[5][6] This includes a sequential process of damage to the epithelium, loss of protective wax, and accumulation of moisture that leads to a higher pH and bacterial growth.[7]

Otitis externa is a clinical diagnosis; therefore, a complete history and physical examination are required. Physical examination should include evaluation of the auricle, assessment of surrounding skin and lymph nodes, and pneumatic otoscopy. Otoscopy will reveal an erythematous and edematous ear canal with associated debris (yellow, white, or gray). In some cases, the tympanic membrane is erythematous or partially visualized due to edema of the external auditory canal. Concomitant otitis media is suspected when there is evidence of an air-fluid level along the tympanic membrane (middle ear effusion).

Its clinical presentation may vary depending on the stage or severity of the disease. Initially, patients with OE will complain of pruritus and ear pain that is usually worse with manipulation of the tragus, pinna, or both. Ear pain is often disproportionate to physical exam findings, and it is due to irritation of the highly sensitive periosteum underneath the thin dermis of the bony ear canal. It can also present with otorrhea, fullness sensation, and hearing loss.

Systemic symptoms such as fever greater than 101 F (38.3 C) and malaise suggest extension beyond the external ear canal.[4]

Otitis externa can be classified by severity as follows:

Otitis externa is a clinical diagnosis. Routine laboratory testing and/or ear canal cultures are not necessary or indicated for uncomplicated cases. However, cultures are recommended for recurrent or resistant cases of otitis externa, particularly in immunocompromised patients.[4] For patients with severe symptoms, blood glucose and human immunodeficiency virus (HIV) testing may be considered.

Most patients diagnosed with otitis externa will receive outpatient management. The mainstay of uncomplicated otitis externa treatment usually involves topical antibiotic drops and pain control. Pain can be intense and severe; therefore, it should be managed appropriately. Acetaminophen or nonsteroidal anti-inflammatory drugs have been proven to be adequate for mild to moderate pain. Also, opioids (e.g., oxycodone or hydrocodone) are recommended for severe pain and should be prescribed in a limited amount since symptoms for uncomplicated OE should improve within 48 hours of initiating topical antibiotic therapy. If there is no improvement in pain within 48 to 72 hours, a reassessment by a primary care clinician is strongly recommended.[2]

In general, antibiotic otic drops are safe and well-tolerated. Their safety and efficacy compared to placebo have been proven with excellent results in randomized trials and meta-analyses. Some studies have shown that topical antibiotic drops containing steroids may decrease inflammation and secretions, and hasten pain relief.[2][8] Regardless of the topical antibiotic used, approximately 65% to 90% of cases will have a clinical resolution within 7 to 10 days.

Patients with marked edema of the ear canal require placement of an ear wick (compressed hydrocellulose or ribbon gauze) to facilitate medication delivery and reduce ear canal edema.[2] The wick is moistened with antibiotic drops and placed into the ear canal. The wick will usually fall out spontaneously, and if necessary, it should be removed by a clinician in approximately two to three days.

If perforation of the tympanic membrane is suspected, neomycin/polymyxin B/hydrocortisone drops, alcohols, and ototoxic drops (aminoglycosides) should be avoided. Fluoroquinolones have no ototoxicity and are the only FDA-approved drug for middle ear use; therefore, they are recommended for the treatment of uncomplicated OE with associated tympanic membrane perforation.[9]

Although not typically done in the primary care setting, aural toilet or cleansing of the external ear canal is recommended for the treatment of acute OE by the American Academy of Otorhinolaryngology. Gentle lavage or suctioning should be performed only if there is no evidence or suspicion of tympanic membrane perforation. Also, it should be avoided in patients with a history of diabetes because it can potentially induce malignant otitis externa.[1]

Oral antibiotics have not been proven to be beneficial,[5] and their inappropriate use will increase the resistance among common otitis externa pathogens. The indications for oral antibiotics include:

Topical antifungal agents are not considered a first-line treatment for OE. They are only recommended if fungal etiology is suspected by otoscopic examination or culture results.[5]

Clinicians should keep a broad differential diagnosis when patients present with ear pain and/or ear discharge. In the pediatric population, it is important to consider otitis media with ear drainage from a ruptured tympanic membrane as part of the differential diagnosis. Since it may be difficult to differentiate OE from otitis media with perforation, if differentiation is unclear, it is prudent to treat both conditions. Other conditions that can mimic OE include:[2]

Patients treated with antibiotic/steroid drops can expect symptoms to last for approximately 6 days after treatment began.[6] In many cases, OE will resolve spontaneously in the acute period.[5] However, acute episodes may recur; the risk of recurrence is unknown. There is a potential for hearing loss and canal stenosis from chronic inflammation, which may occur with a single acute OE episode.

Malignant or necrotizing otitis externa (NOE) is a life-threatening condition that occurs most commonly in immunocompromised patients and older patients with diabetes mellitus. NOE is an extension of the infection that can spread to the temporal bone, and it is typically caused by Pseudomonas aeruginosa (90% of cases). Early diagnosis is crucial as it has a high mortality rate; therefore, it should be suspected in patients with diabetes or immunocompromised patients with OE and fever that do not respond to treatment. Antibiotics with antipseudomonal coverage are the mainstay of treatment.[10] This severe infection can result in temporal bone osteomyelitis and cranial nerve palsy. The most common cranial nerve involved is the facial nerve. Other complications associated with NOE include meningitis, dural sinus thrombosis, and cranial abscess.[4]

Otitis externa is a common disease and is usually managed by primary care providers. Patients with otitis externa rarely require hospitalization or consultation. Otorhinolaryngology is usually consulted for severe cases presenting with complete occlusion of the external ear canal or cases that do not respond to treatment in 72 hours, or when necrotizing otitis externa is suspected.

It is of great importance to educate patients on how to properly administer otic drops and the significance of adherence to treatment. The patient should lie down with their affected side facing upward, apply two to five drops depending on the prescribed drug, and remain in that position for about 3 to 5 minutes. This will maximize treatment effectiveness. Patients should also be advised to avoid water exposure and to minimize manipulation or trauma to the ear.[1]

Otitis externa is a diffuse inflammation of the external ear canal of bacterial etiology that is best managed with an interprofessional team approach. This team may include the primary clinician, nurses, and pharmacists. Current treatment guidelines recommend topical antibiotics with steroids and pain medications as first-line treatment. Providers have frequently prescribed oral antibiotics despite evidence-based data that recommends their avoidance.[2] The selection of ideal treatment should rely on history, physical examination, risk factors, and clinical presentation to avoid antibiotic resistance or unfavorable outcomes. However, when the diagnosis is not clear, or when the patient is not improving despite appropriate management, prompt consultation with otorhinolaryngology is recommended. 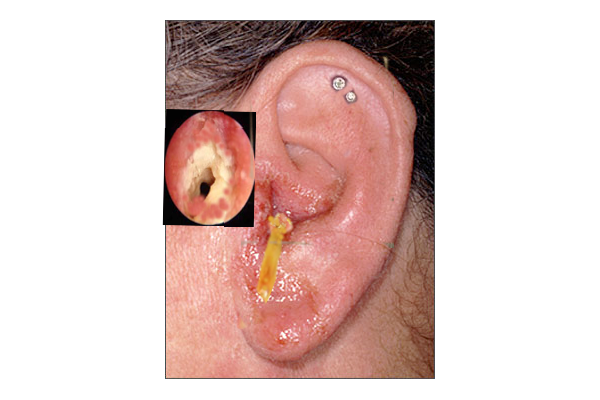 Hutson KH,Watson GJ, Malignant otitis externa, an increasing burden in the twenty-first century: review of cases in a UK teaching hospital, with a proposed algorithm for diagnosis and management. The Journal of laryngology and otology. 2019 May;     [PubMed PMID: 30975233]