Functioning as vital cells in the bone matrix that maintains adequate bone mineral density through stimulating bone turnover and maintaining plasma calcium levels, osteoclasts are multinucleate cells that arise from hematopoietic stem cells.[1][2][3][4] As a result, they are identifiable with the presence of CD13, CD14, and CD68 antigens and the lack of CD56, GrB, and Ki67 antigens.[5] When they become activated through their receptor activator nuclear factor-kB (RANK), they function primarily to resorb bone through various acids and collagenases. They have a complex interplay with the immune system, which can stimulate them and result in various pathologies.[1][2][3][6][7] Many bone diseases are associated with dysfunctional osteoclasts, such as osteoarthritis, osteoporosis, and osteopetrosis.[4][8][9][10]

What happens to osteoclasts in space? (e.g., the bones of astronauts)

In the presence of microgravity (μG), there is a monthly bone loss of about 1 to 2%.

The genomic activity of osteoclasts is high, involving maturation, differentiation, and metabolic stimulation processes. In particular, according to more recent literature, we can find increases in:

Pre-osteoclastic cells with μG show increases in other molecules, such as:

Osteoclasts are large dome-shaped multinucleated cells comprised of fused mononuclear osteoclast progenitor cells. Osteoclast progenitors fuse together on the bone surfaces but are primarily found in bone marrow, where they derive from macrophage/dendritic cell precursors, which arise from myeloid progenitor cells, which ultimately originate from hematopoietic stem cells. Therefore, osteoclasts have a hematopoietic origin, which may explain their diverse and dynamic function.[1][2][3][4] On average, osteoclasts have eight nuclei and are 300 micrometers large, which researchers theorize gives them a strong resorptive property.[2] Average osteoclasts are 15 times larger than macrophages, which are 20 micrometers large. In some pathological conditions, they have been reported to have as many as 100 nuclei.[2] Osteoclasts are well-known for their characteristic ruffled border, which forms on their inferior surface due to the high concentration of vesicles in that region of their cell membrane.[1] Osteoclasts contain many mitochondria, which provides them with abundant energy for bone resorption. Additionally, other common cell components such as Golgi bodies and lysosomes are also present in osteoclasts.[1]

A lifecycle has been proposed for osteoclasts, with the order being the following[1]:

Osteoclasts and osteoclast progenitor cells have many receptors present on their cell surface, which play important roles that will be discussed later. The most important ones include receptor activator nuclear factor-kB (RANK) and toll-like receptors (TLRs).

Osteoclasts serve a vital role in bone metabolism and turnover, being the cells responsible for bone resorption. As a result, they have two essential functions: maintaining strong and healthy bone architecture and maintaining normal plasma calcium levels.[2] Bone resorption is defined as the dissolution and degradation of the bone matrix, both mineral and organic components. It occurs through five osteoclast-mediated steps:[1][2][3][6][7]

Upon completion of those five steps, the osteoclast detaches from the bone matrix and finds another spot to perform bone resorption, or it undergoes apoptosis.

On light microscopy, osteoclasts are identifiable as containing red in their cytoplasm if stained with tartrate-resistant acid phosphatase (TRAP). The multinucleated appearance of osteoclasts can typically be visualized on light microscopy, and large vacuoles can also be seen. Light microscopy allows visualization of the osteoclasts being surrounded by osteocytes and other components of the bone matrix, allowing viewers to gain an understanding of the complex interactions between different cells within the bone matrix.[11] Additionally, since osteoclasts contain a large number of mitochondria, observing the increased cytochrome C oxidase activity of osteoclasts in bone marrow can help differentiate them from other cells.[1]

On electron microscopy, which has much higher magnifying power than light microscopy, the extensive multinucleated appearance of osteoclasts can be visualized, along with a closer view of the ruffled border adjacent to the bone undergoing resorption. The lacunae in which osteoclasts are contained, resorbing bone, are known as Howship's lacunae. Lying under the ruffled membrane are numerous visible vacuoles. Some of the vacuoles contain cells visibly undergoing apoptosis.[11]

The RANK-RANKL interaction is essential for osteoclastogenesis, and that interaction is under the regulation of osteoprotegerin (OPG). Osteoblasts and stromal cells secrete OPG, and it binds to RANKL on osteoblasts and stromal stem cells and prevents the interaction between RANKL and RANK, inhibiting osteoclastogenesis. This serves as a control mechanism to prevent excess bone resorption from taking place.[12] OPG opposes the effects of 1, 25-dihydroxy-vitamin D, parathyroid hormone (PTH), parathyroid hormone-related peptide (PTH-rP), and prostaglandin E2 (PGE), which all increase bone resorption.[6] Therefore, the interplay between RANK-RANKL-OPG is crucial in regulating osteoclastogenesis and the maintenance of bone mineral density and plasma calcium levels. Dysregulation of the RANK-RANKL-OPG system plays a vital role in the pathogenesis of many conditions, such as osteoporosis, osteopetrosis, and bone tumors.

Similar to osteoblast expression of RANKL, arguably the most important osteoclast determining factor, activated T-cells also express RANKL. When there is a persistence of elevated active T-cells, it can lead to increased osteoclast differentiation, and ultimately, excess bone resorption.

Immune cells in the body have toll-like receptors (TLRs), which recognize pathogen-associated molecular patterns (PAMPs) on invading organisms, allowing the body to mount an immune response to the foreign organisms. Upon activation of the TLRs and immune cells, pro-inflammatory cytokines are produced, which can indirectly affect bone metabolism through activation of osteoclast differentiation, as previously mentioned. This is an indirect mechanism through which the innate immune system can cause osteoclast-mediated resorption of bone. Additionally, osteoclasts themselves have TLRs, which can be directly activated by foreign organisms. When TLRs on late osteoclast progenitors and osteoclasts are active, that increases the generation of osteoclasts. However, when TLRs on early osteoclast progenitors are activated, it decreases the generation of osteoclasts. This has been theorized to be the body’s way of preventing excess osteoclast generation.

Aside from the interaction between the musculoskeletal and immune systems, the formation of many of the osteoclast structures previously described is important to prevent the malfunctioning of osteoclasts. For example, failure of the ruffled border to form may result in the failure of bone resorption.[3] 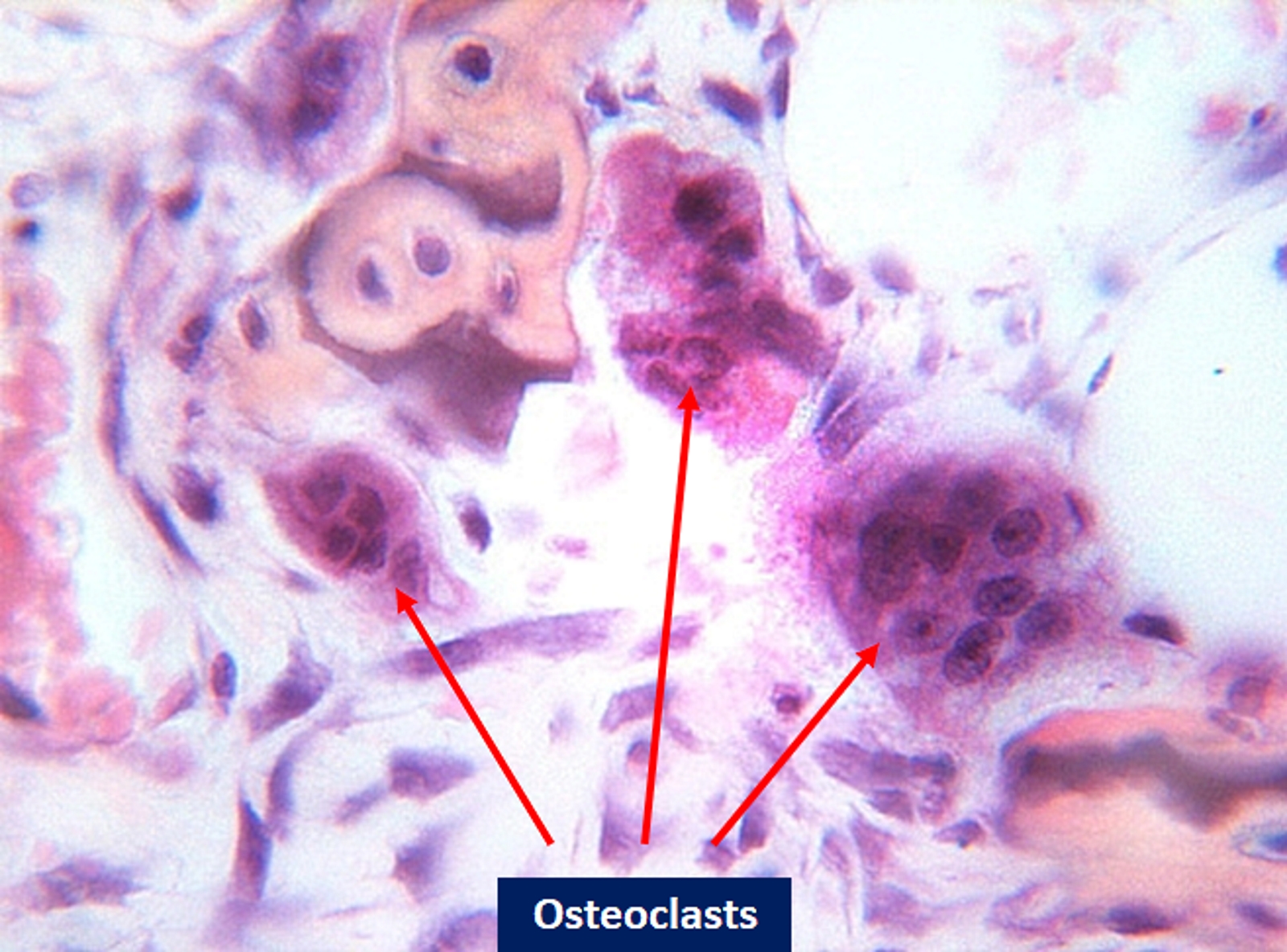 Chambers TJ, Regulation of the differentiation and function of osteoclasts. The Journal of pathology. 2000 Sep;     [PubMed PMID: 10951393]

Coudert AE,de Vernejoul MC,Muraca M,Del Fattore A, Osteopetrosis and its relevance for the discovery of new functions associated with the skeleton. International journal of endocrinology. 2015     [PubMed PMID: 25873953]